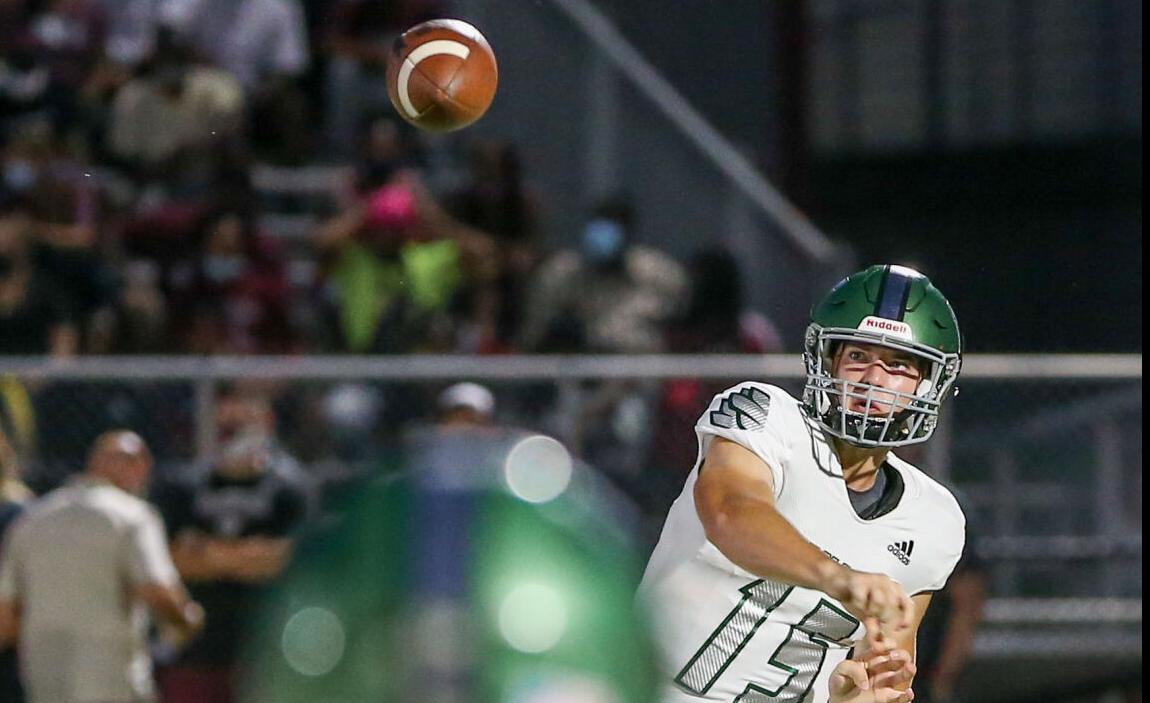 Colin Blazek fires to a wide-open Jayshon Platt. Four Indians have at least 15 receptions through six games with Blazek spreading the ball around. 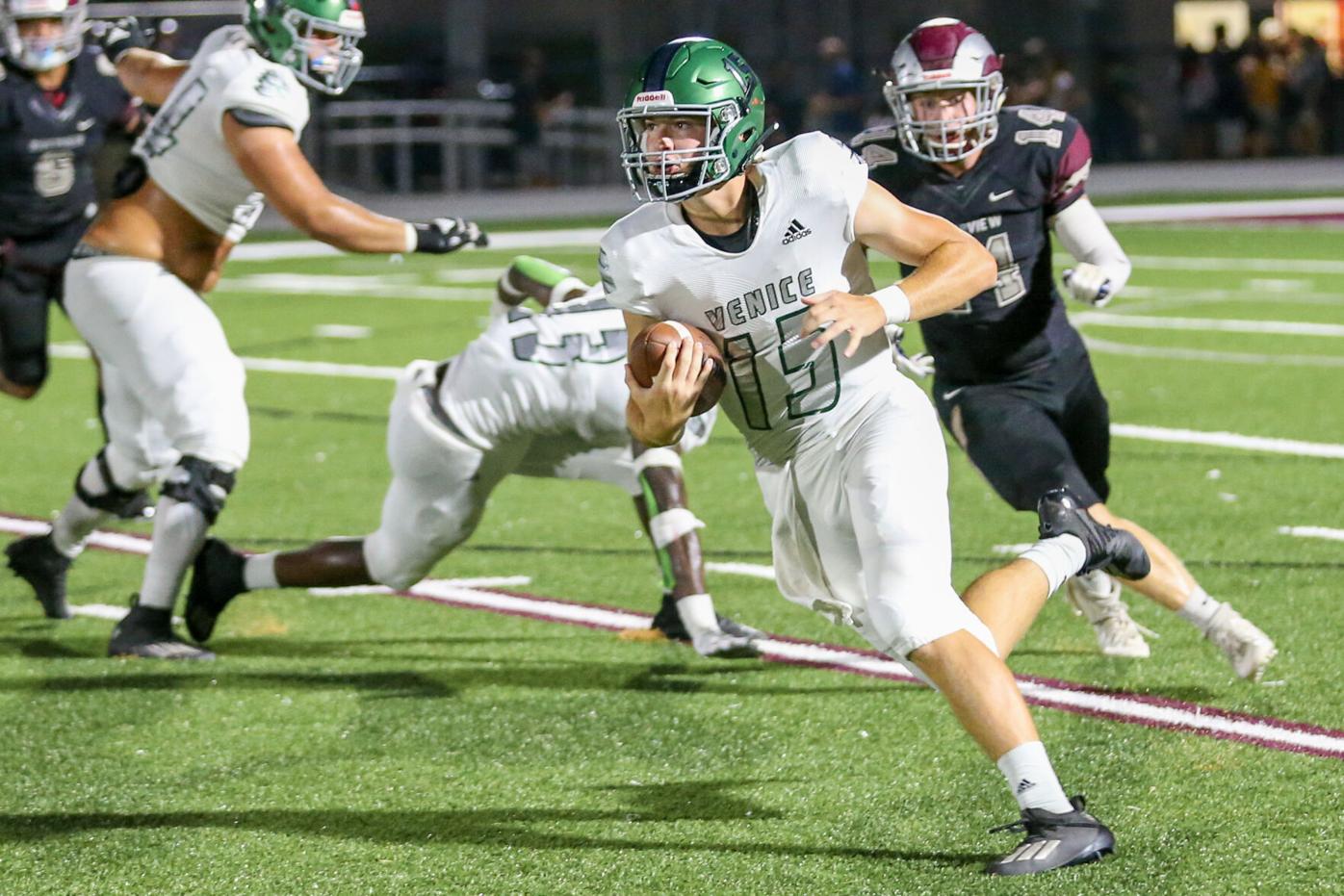 At 6-foot-2 and 195-pounds, Colin Blazek isn’t afraid to take off running with the ball if he needs to. 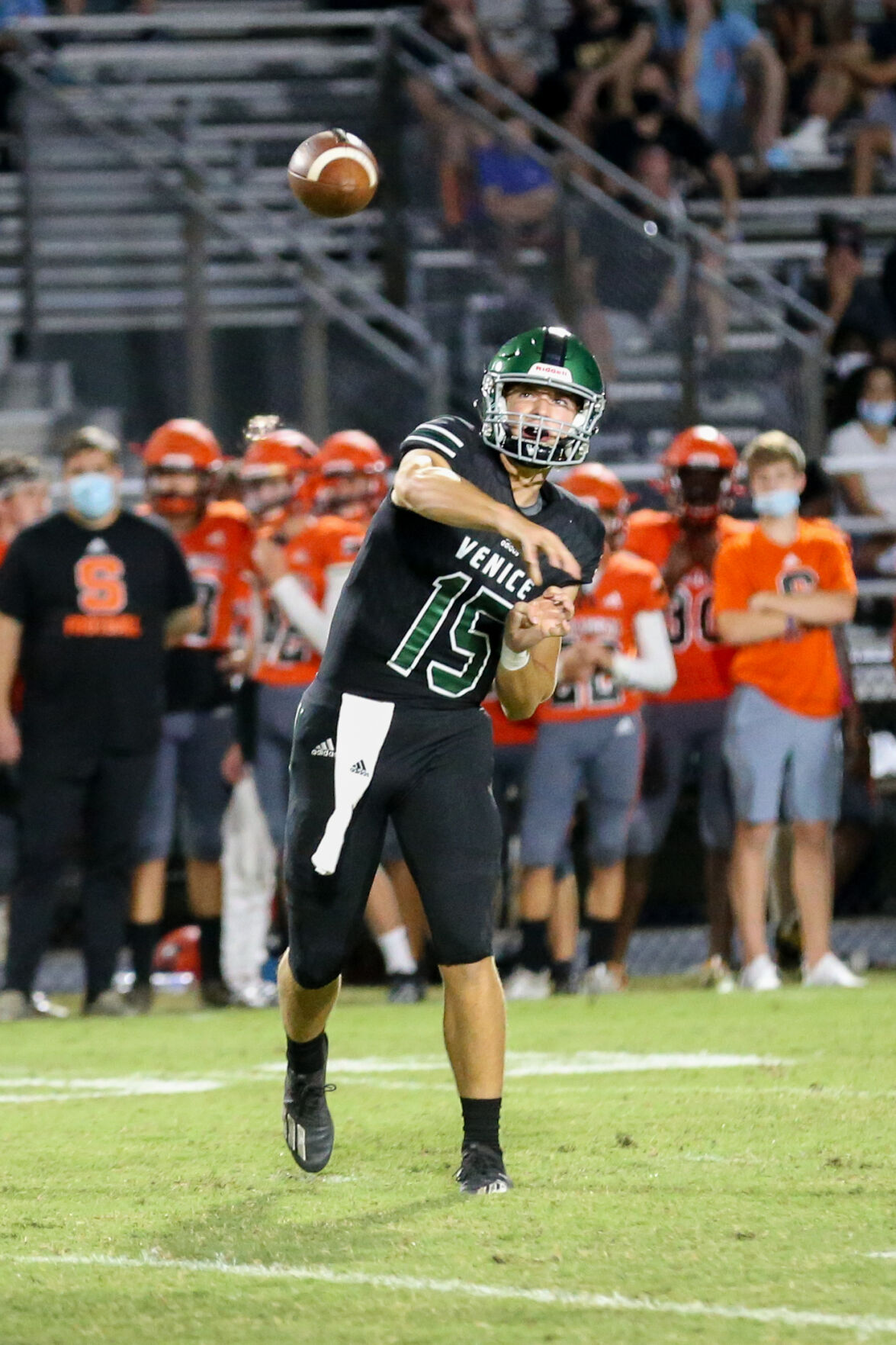 Colin Blazek has turned Venice into a team that’s ranked No. 8 in Florida by MaxPreps with legitimate state championship aspirations.

Colin Blazek fires to a wide-open Jayshon Platt. Four Indians have at least 15 receptions through six games with Blazek spreading the ball around.

At 6-foot-2 and 195-pounds, Colin Blazek isn’t afraid to take off running with the ball if he needs to.

Colin Blazek has turned Venice into a team that’s ranked No. 8 in Florida by MaxPreps with legitimate state championship aspirations.

VENICE — When Venice High quarterback Colin Blazek heard his name called as the Indians trailed against IMG Academy in Week 1, he was a little taken aback.

“I was like, ‘Wow, is this really happening? This is crazy,” Blazek, who transferred to Venice two weeks before the season, remembered thinking.

“I knew I was going to get a little time, but I wasn’t sure how it was going to go. I was a little nervous. I had trust in the (offensive) linemen to protect me and in the receivers to make plays.”

Blazek, a senior pro-style quarterback, had last played against junior varsity competition for Neuqua Valley High in Naperville, IL. He had never started a varsity game before, let alone competed against the No. 1 team in the nation.

Though he didn’t lead Venice to a comeback win, Blazek did complete 11-of-21 passes for 157 yards, 2 TDs and 1 INT — more than enough to show Venice coach John Peacock all he needed to see. Blazek has been the team’s starter since that game.

The switch from Steffan Johnson — the starter for the second-half of the 2019 season — to Blazek has paid off for the Indians. Since that Week 1 loss, the team is 5-0 and has outscored opponents, 257-33, including a 21-point win over perennial title contender Lakeland last week — earning Venice the No. 8 ranking in the state from MaxPreps.

While Blazek has made the transition seem seamless, it hasn’t been an easy road for the senior. After sitting behind an FCS Division-I quarterback in Mark Gronowski (South Dakota State) for a few years back in Naperville, this season was supposed to be Blazek’s turn as the starter.

Then, the high school football season in Illinois was postponed to the spring due to the coronavirus, and Blazek’s father received a job offer in the Venice area that he couldn’t pass up.

“I think he made a smart move, basically trying to jump start a new career at a new school in a totally new state, not knowing anything about them,” Gronowski said of Blazek.

“It’s a really tough spot. Most people would just shy away from it. It takes a lot of guts and a lot of trust in yourself to put yourself out there and gamble on yourself.”

Blazek had to leave behind lifelong friends, his football team to take a chance on this new opportunity.

And when he got here, it wasn’t as if the starting job was his to lose.

“It was tough, definitely,” Blazek said of leaving behind the only town he’d ever lived in. “But coming down here everyone accepted me and has treated me like family. It’s been great.”

The Indians were set to start the season with Johnson — who broke the single-game rushing record and took Venice to the state semifinal — as the team’s quarterback. But it didn’t take long for Peacock to realize he needed to pivot in a different direction.

“It was at that IMG game,” Peacock said of when he began thinking of making the switch. “I wasn’t sure because I hadn’t seen him against live bullets. But we were like, ‘Hey, we have IMG coming up. Let’s see what happens.’

“He played great. He drove us down the field 95 yards at the end of the second quarter and scored a touchdown. He did that with eight days of practice. If we line up against IMG now, I think it’s a totally different game.”

Johnson, who has several Division-I offers, could have bristled at the switch, but has also shined instead. The former quarterback still lines up under center from time to time, and also plays some receiver and cornerback. He’s rushed for 132 yards and 2 TDs while catching 15 passes for 197 yards and 3 TDs and throwing for 62 yards and another score.

“He’s a game-changer,” Johnson said of Blazek. “He was able to come in and fix everything. He was like the missing puzzle piece we needed.

“Some thought that I would take it badly (being replaced at quarterback), but I thought I handled it really well. I’m all over the field. Colin is making plays, too.”

With one month remaining in the regular season, Peacock is comfortable calling this passing attack the best he’s ever had “by far,” and none of this would be possible without Blazek.

However, the 6-foot-2, 195-pounder still does not have a single college offer. Of course, there was little-to-no varsity film of Blazek’s to evaluate — until now.

That’s all likely to change for a player who Peacock calls “the best in the state.”

“I can’t say enough good things about him,” Peacock said of Blazek. “It’s really unbelievable. He was a JV football player last year. In my opinion, I haven’t seen a better quarterback. He’s the best in the state.

“He’s the same guy in practice as he is in the game. He makes those throws every day. He throws kids open. He’s unshakeable. He’s just the real deal.”

Blazek isn’t the only area quarterback to help his team light up the scoreboard on Friday nights. Other area teams from Lemon Bay to Charlotte have designed their game plan around their quarterbacks and it’s worked like a charm.

Here’s a look at how the other playmakers are stacking up.

Rogers is cementing his place in the Port Charlotte history books as each season passes. The dual-threat senior passed for the most touchdowns in school history last year, beat the Tarpons for the first time in six years and has only gotten better this year.

Busha has taken the meaning of “dual-threat” to heart this year — throwing for 586 yards and 7 TDs and rushing for 408 yards and 7 TDs — as he’s powered the Tarpons’ offense.

The do-it-all senior has led his team to impressive wins over Braden River and Lehigh, and will get a chance to add on to that list when Charlotte travels across the Peace River to play the Pirates next week.

Injured for all but the final four games of the 2019 season, Andrle finished 3-1 as a starter with his only loss coming against a tough Tampa Catholic team.

The senior has picked up right where he left off this season — aided by a deeper group of skill players. With Andrle healthy, the Mantas are are 4-1 and have scored at least 27 points in every game.

It was a rough 0-3 start to the season for North Port, which couldn’t get it offense to score 10 points in each of its first three games.

However, splitting series between Silverberg, a junior, and Riley, a senior, has paid off for the Bobcats, who have won two straight over Parrish Community and Bayshore.

However, Riley is currently out with an illness, so it will be up to Silverberg for at least the next game.

It’s been a tough year for the 0-5 Bulldogs, but especially for Fullerton, the sophomore who has tried to lead the offense against nearly impossible odds.

Coach Bumper Hay called Fullerton a “gritty and tough” quarterback who isn’t afraid to take off and run.

Though Fullerton has been out for three weeks with a concussion, Hay said he’s been encouraged with his young quarterback’s progress despite the tough start.