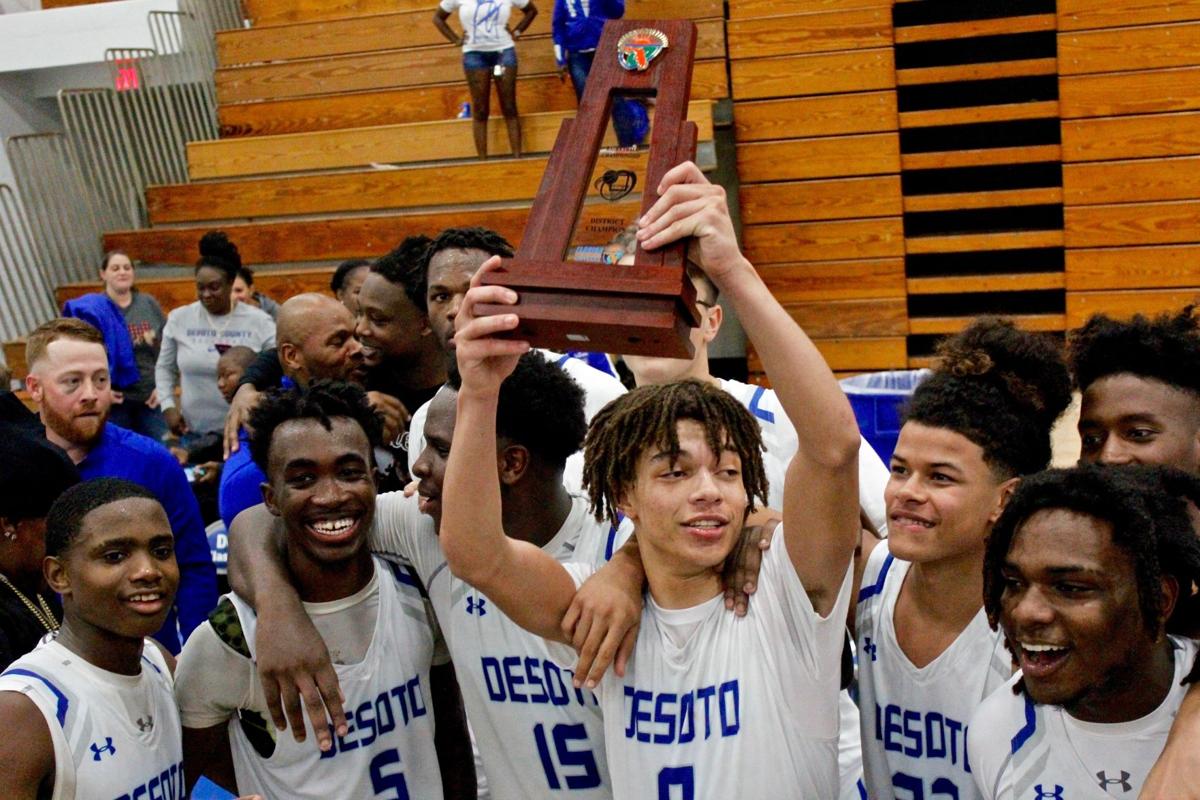 The DeSoto County players raise the district championship trophy after a 72-70 win over Teneroc on Friday. 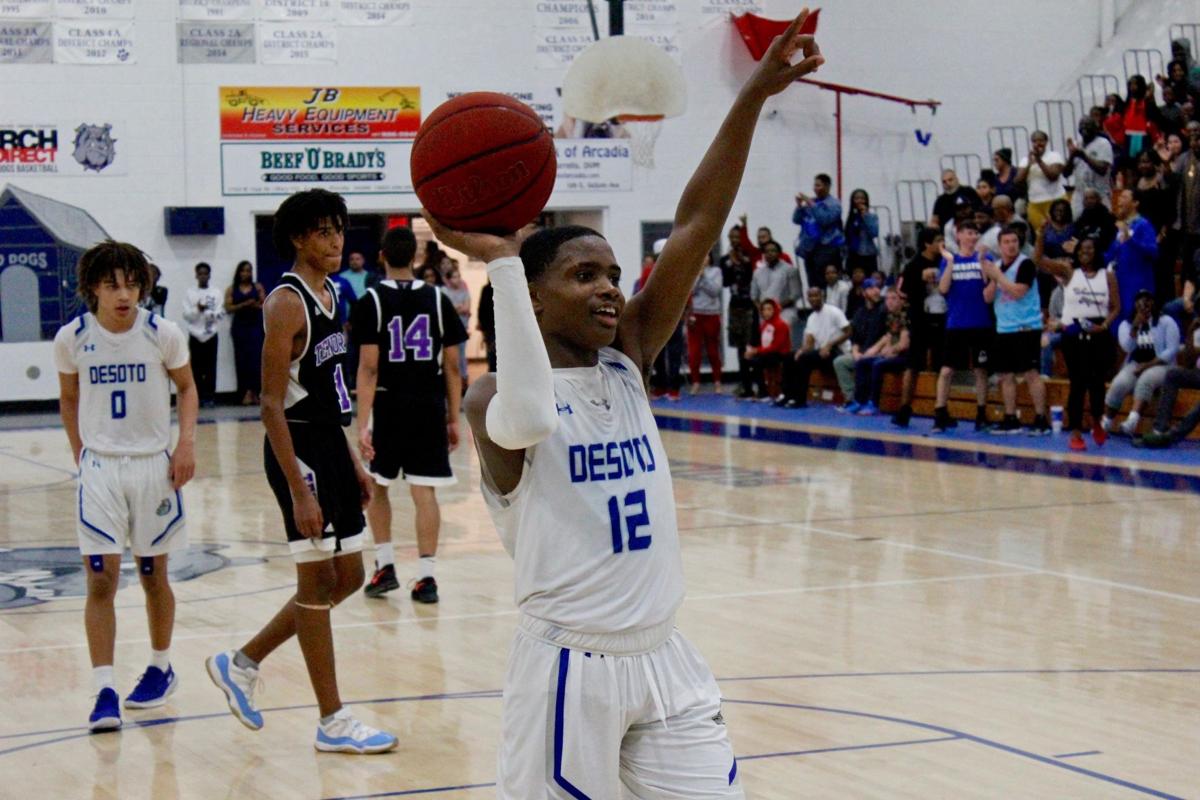 DeSoto's Nasir Gilchrist points to the area on the wall that houses district banners late in the fourth quarter. 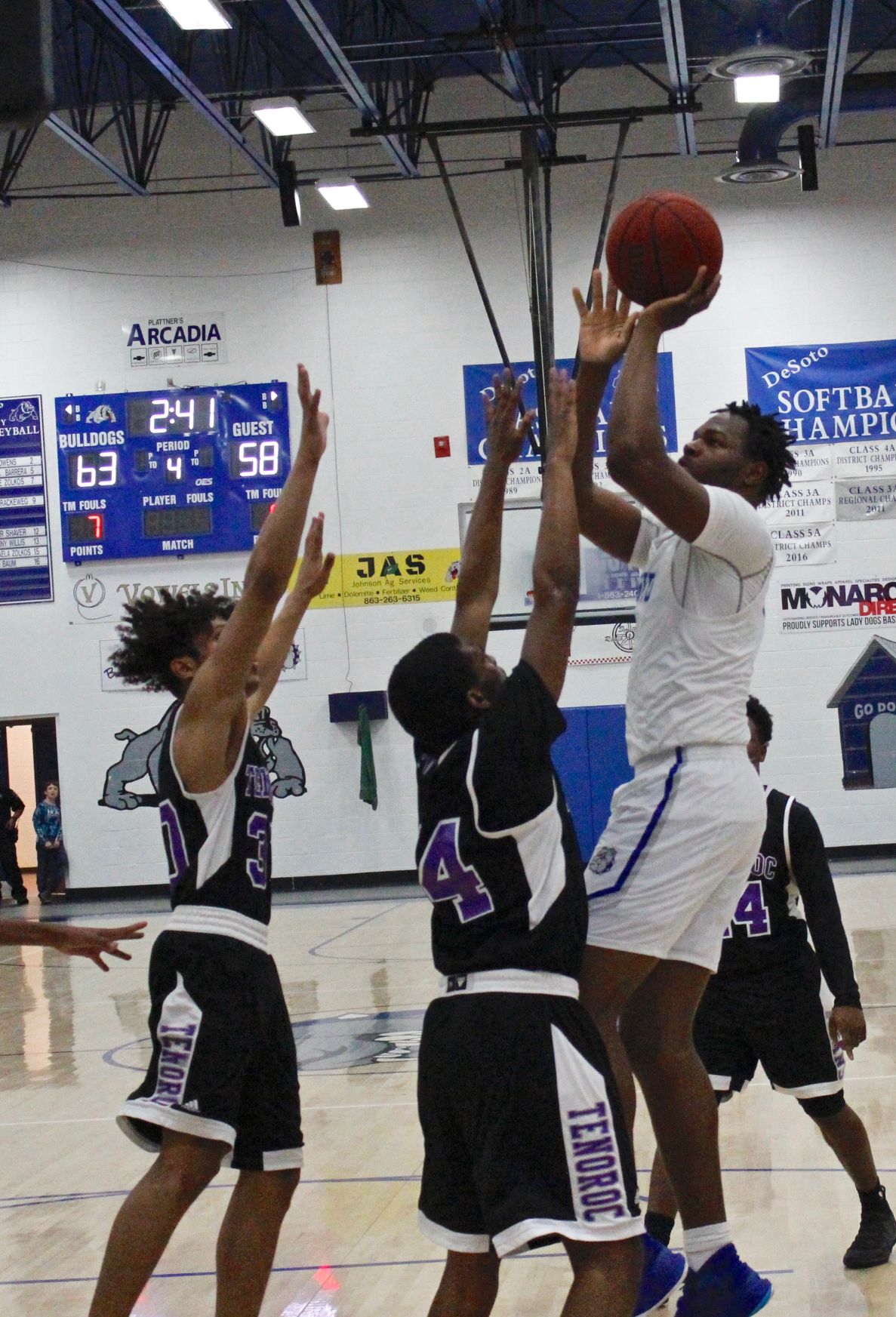 Desoto's Kiemar Richardson rises up for a jumper in the fourth quarter against Teneroc on Friday. 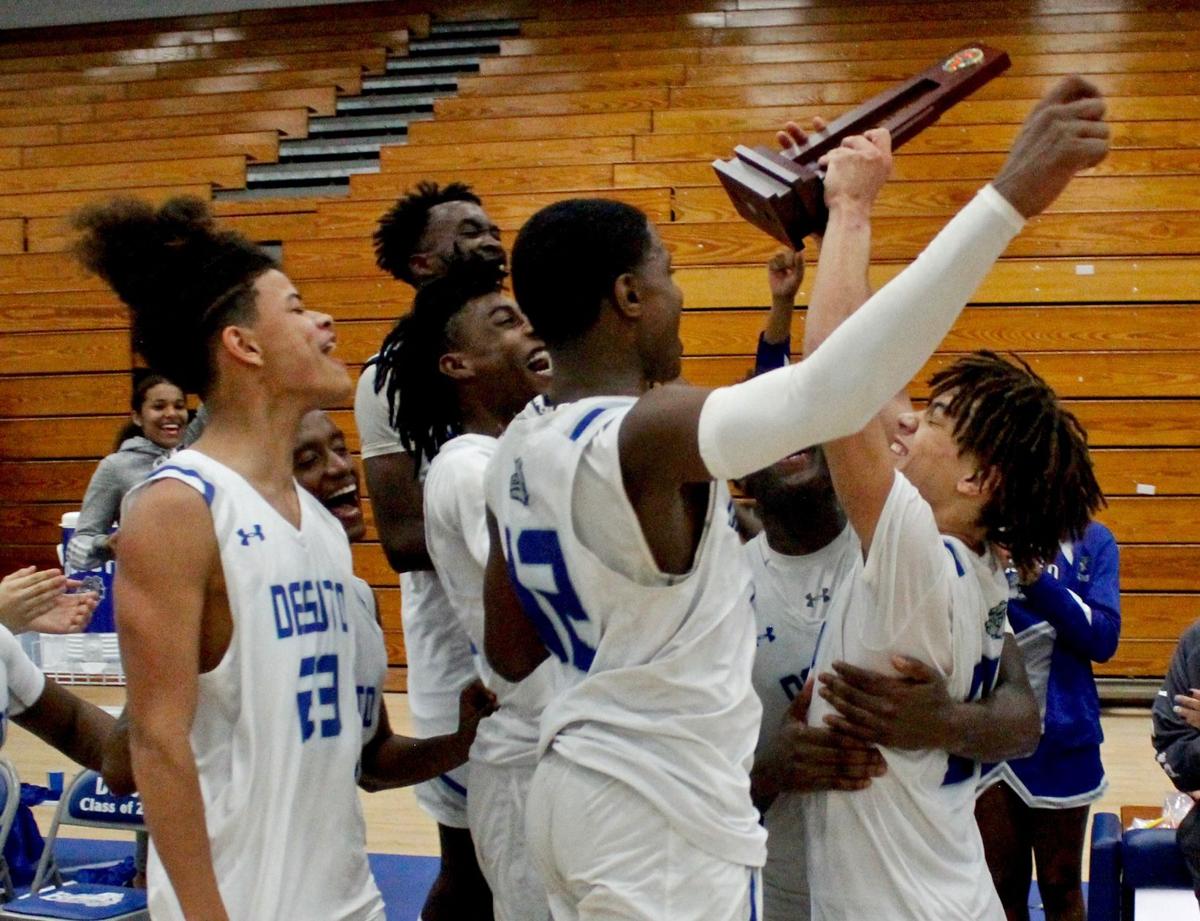 DISTRIC CHAMPS: Photos from a busy night of prep basketball

ARCADIA — As DeSoto County basketball coach Darrel Nicklow walked into his office to process the win, his team swiftly followed, gatorade bottles ablaze to shower him in celebration.

The Bulldogs held on to a late lead for a 72-70 win over Teneroc, bringing home Desoto's first district title since 2007.

"It's a big moment for DeSoto County. It's been 13 long years," a drenched Nicklow said. "It's all about the kids. They worked so hard, you just don't know. They started believing in themselves and boy it paid off tonight."

Nicklow won the district as a player and again as an assistant, but this is his first as head coach.

It was an improbable comeback for the Bulldogs (13-11), who started the year 2-8. But they finished the year 10-3, earned the No. 2 seed and battled their way through districts to earn a spot in regionals.

Not many saw this kind of run coming back in December, not even some of the players. But as a unit, their belief that it wasn't a lost season laid the groundwork for Friday's win.

"When we were 2-8, I didn't really think this was possible," said junior Ethan Redden, who led with 19 points. "But my boys turned things around and believed and now we're district champs. It means the world to be a part of this."

Desoto got down early with Teneroc (4-19) taking a quick 6-0 lead off two turnovers.

The Bulldogs responded with a 7-0 run of their own and led 20-15 by quarter's end after a banked layup from Kiemar Richardson near the buzzer. Richardson scored 14 for the game.

The plan coming in was to keep Teneroc out of the paint due to their perceived lack of outside shooting and Nicklow felt they executed that for much of the night.

The two programs stayed tight, though with DeSoto pulling away near the end of the third quarter, holding an eight-point lead. However, turnovers and missed free throws allowed the Titans to stay in the game.

Sophomore Nazir Gilchrist, who finished with 14 points, had a chance to seal the win after being fouled on a 3-pointer with just under two minutes left, but couldn't knock down the free throws.

Teneroc cut the lead to five with a layup near the one minute mark, but failed to make multiple 3-point attempts near the end to close the gap. With 4.6 second left, they were able to run up the floor and hit a 3, but at that point it didn't matter.

As the buzzer rang, the celebration commenced with players embracing, others pointing up to the part of the wall that houses district banners. Assistant coaches donned pre-made district champion shirts.

For a team that had little to play for midseason, they ended up champions.

"13 years man," Gilchrist said. "This is a special group. We feel like we can go all the way, we just need to stay dedicated."