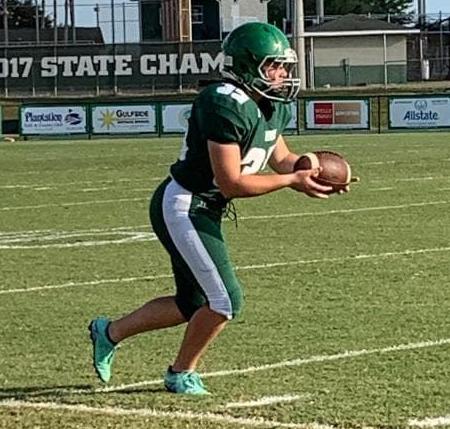 Morgan Pachter never played football before high school, but her skills as a goalkeeper have translated well to punting at Venice.

Venice junior varsity punter Morgan Pachter got to play as a defensive back last year, playing some safety and cornerback toward the end of her freshman season. 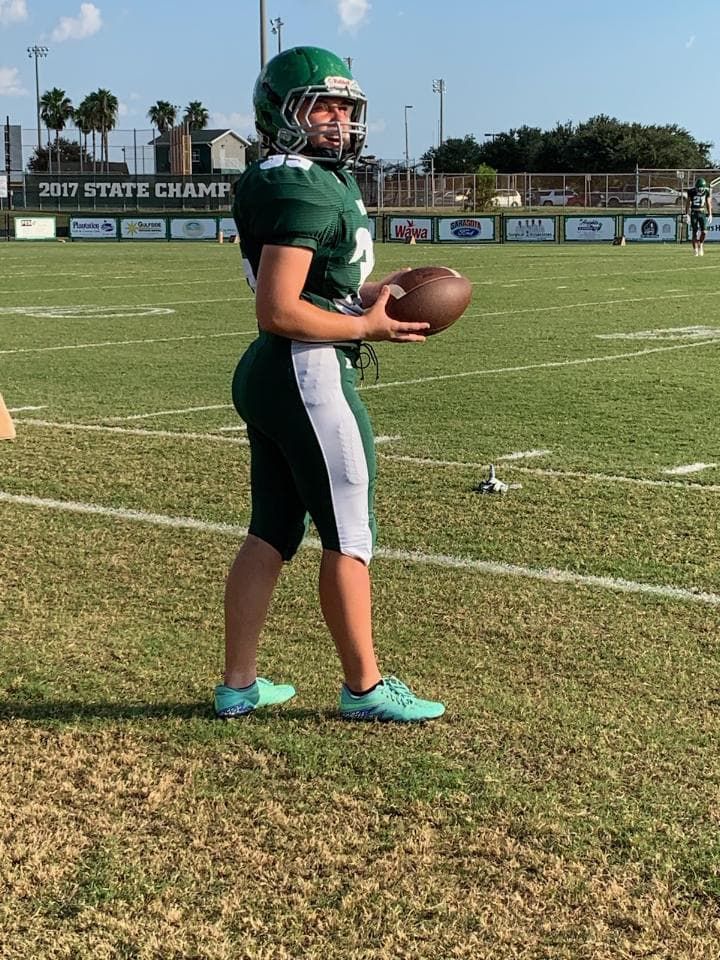 Morgan Pachter is also a goalkeeper for the Venice junior varsity soccer team, and wants to stick with soccer and football for all four years of high school.

Morgan Pachter never played football before high school, but her skills as a goalkeeper have translated well to punting at Venice.

Venice junior varsity punter Morgan Pachter got to play as a defensive back last year, playing some safety and cornerback toward the end of her freshman season.

Morgan Pachter is also a goalkeeper for the Venice junior varsity soccer team, and wants to stick with soccer and football for all four years of high school.

More often than not when Morgan Pachter takes off her helmet, she gets a reaction from the opposing team.

It ranges from stares to double-takes and sometimes even the incredulous, “That’s a girl!”

“When I punt, normally you have to yell, ‘Right, right, left, left, or middle,’” said Pachter, a Venice junior varsity punter. “And me being a girl with my voice, I screamed, ‘Middle!’ And this dude stopped running and goes, ‘Woah, what? That’s a girl.’ It’s just funny to see the reactions.

After a season on the Venice High freshman team and now halfway through her first year on junior varsity, Pachter is getting used to the looks.

She first got the idea to play football when she was playing in a 7-on-7 game for the Young Marines program at Venice Middle School. After having been an avid soccer player, Pachter figured many of the traits of being a goalkeeper — toughness, quick reactions, kicking the ball high and far — related to the game of football.

So, she tried out for the Venice High freshman football team the summer before her ninth grade year. It wasn’t an idea that everyone took to right away.

But eventually, most people around her warmed up to it.

“My mom was like, ‘OK, do what you want to do,’” she said. “My grandma hates it. My twin sister, at first she was like, ‘No, don’t do it.’ But now she’s really supportive of it. My big sister is like my No. 1 fan. She comes to all my games and makes posters and stuff, it’s really cool.”

In the second day of fall practice last year, Pachter learned just how tough she had to be to play football. She was training as a linebacker when she fell awkwardly and broke her thumb.

The injury required surgery and a screw to hold her thumb together — forcing her to sit out most of her freshman season.

But even surgery wasn’t enough to deter Pachter, who had her thumb repaired in the morning and made it to football practice that evening to be with the team.

Making every practice and putting in the same work — sometimes more — than her teammates is something she takes to heart.

“She’s only missed one practice in two years and it was due to the stomach bug where she really couldn’t leave the house,” said Nichole Pachter, Morgan’s mother. “We can’t go anywhere in the summer because she doesn’t want to miss football. They have one week off in the summer — fourth of July week — and if we don’t go somewhere then, we won’t go anywhere because she refuses to miss football.”

Pachter healed in time to play the final two games last season, punting in one and playing as a defensive back in the other. That taste of action was all she needed to stick with football into her sophomore year.

“It spoke volumes of her and her toughness just wanting to be out here,” Venice freshman coach Jason Swartz said of Pachter returning from her thumb injury. “She fit right in.”

This year she learned the rugby style of punting — a low punt that bounces around wildly — to serve as a complement to starting punter Marek Houston for the junior varsity team.

But it’s not just about football for Pachter, who didn’t allow a goal all season as the Lady Indians junior varsity goalkeeper in 2018. She also hopes to expand her athletic pursuits into water polo and girls weightlifting later this year.

She hopes to stick with soccer and football for all four years of high school, and she’s been learning other positions to try and get on the field for more than just punting.

Over a year into her decision to give football a shot, there’s nothing Pachter would take back, and it’s something she said she hopes other girls will take a chance on, too.

“I would tell another girl to stick with her dreams and don’t be afraid,” Pachter said. “Don’t let anyone tell you that you can’t do it. At the end of the day, it’s up to you.”