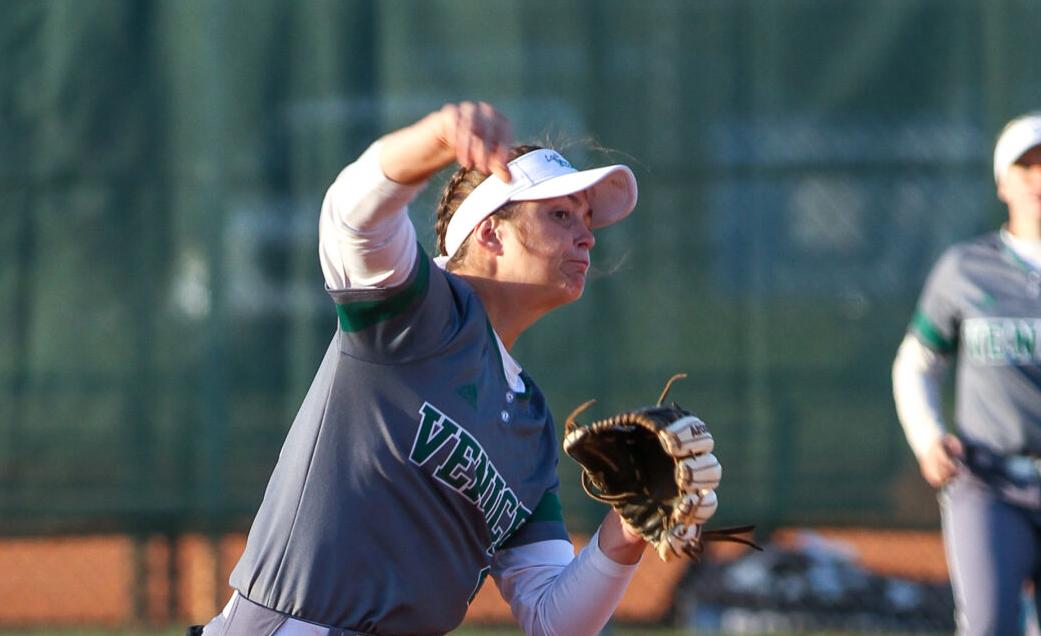 Venice’s Bri Weimer throws to first base to make a play against Lakewood Ranch Tuesday night. 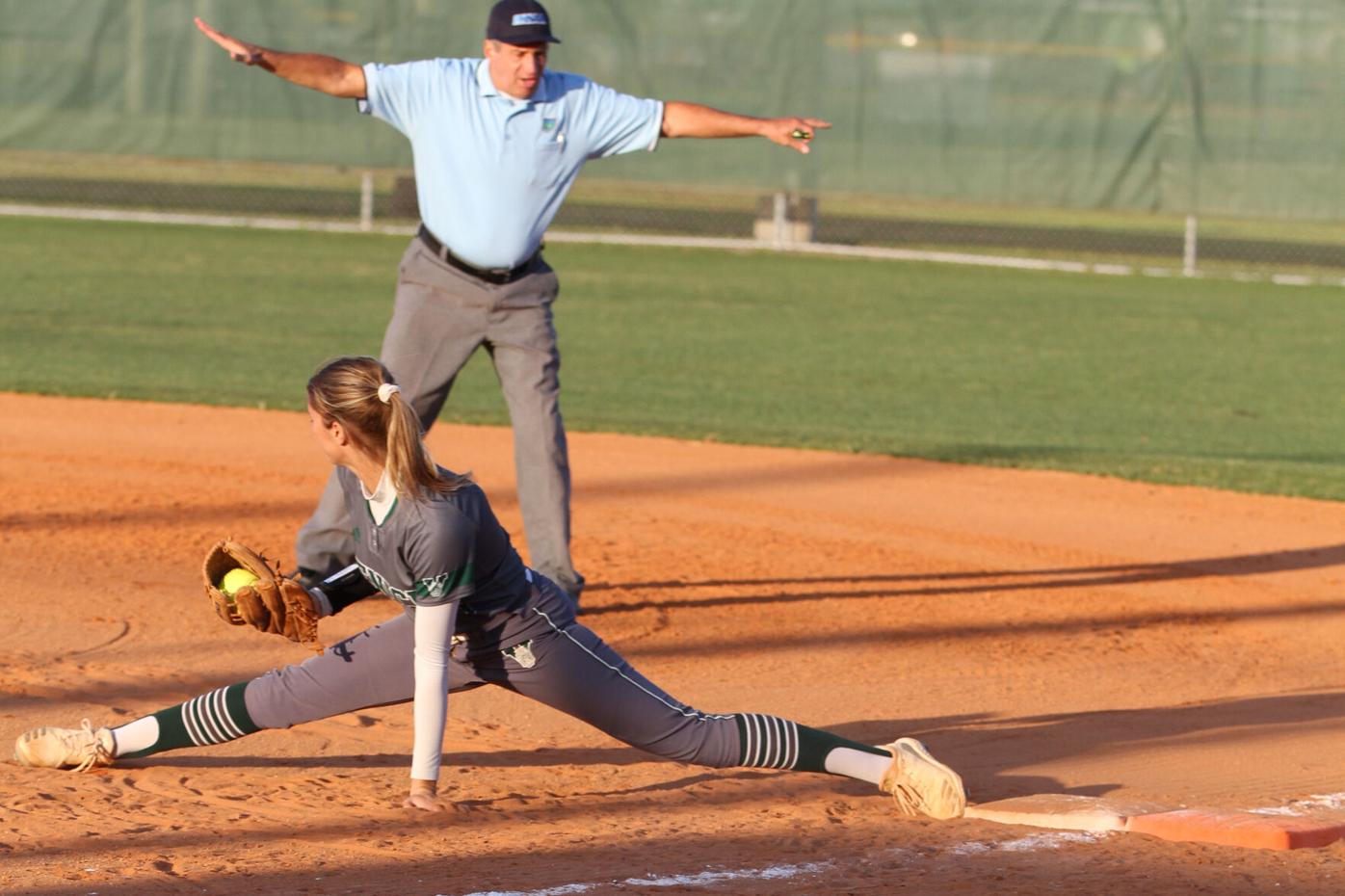 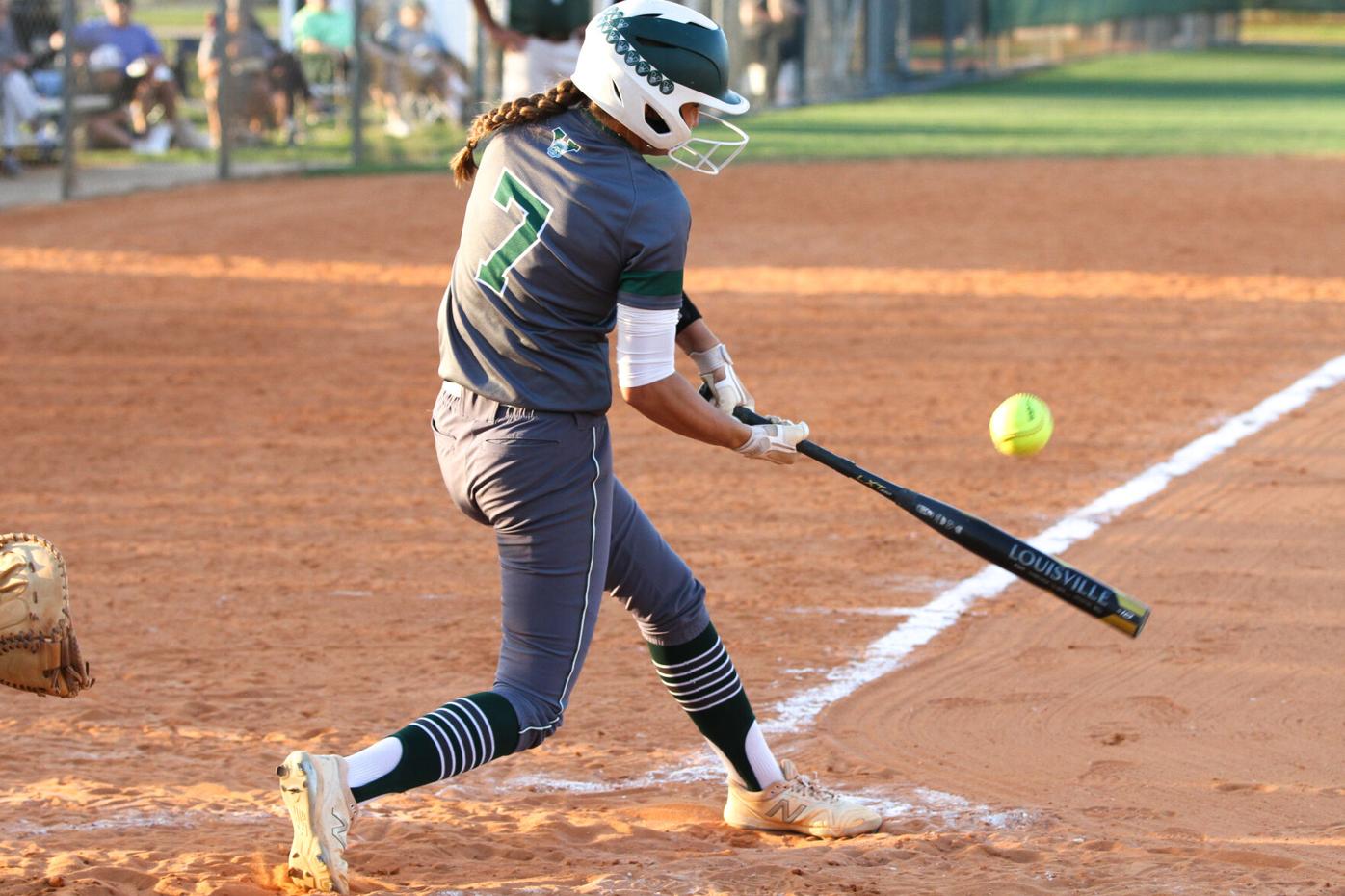 Venice’s Jordan O’Brien makes a hit against Lakewood Ranch during Tuesday’s away game.

Venice’s Bri Weimer throws to first base to make a play against Lakewood Ranch Tuesday night.

Venice’s Jordan O’Brien makes a hit against Lakewood Ranch during Tuesday’s away game.

BRADENTON — The Venice High softball team has state championship aspirations this season, and knows it won’t win a title without beating some top teams along the way.

So even though 6A Venice won’t see 7A Lakewood Ranch (16-2) in the postseason, the Lady Indians still wanted to beat the nation’s No. 2 team, especially after losing to them, 11-3, last week.

Venice did just that — holding on for a 3-2 win — as its pitching held the Mustangs to two extra base hits and scratched across a few runs on a pair of clutch hits.

“We want to win states this year,” said senior first baseman Becka Mellor, who knocked in two runs on a single to left-center in the third inning. “That’s always the goal, but this year we actually have a really good shot. We know we have to beat the best to be the best, so doing this shows us that we can do it. It’s kind of like all of our hard work coming together.

“I told my friend before the game, ‘My goal is to make it seven innings, not get run-ruled and to get a hit.’ I got to do all of that.”

Initially, it looked like Venice would be in for a long night against one of the nation’s best teams.

The Mustangs opened the home half of the first inning with two infield singles and a pair of steals — putting runners on second and third with one out.

Hartman also ran into some trouble in the second as she allowed back-to-back singles to open the inning, but induced a fly out and then a 4-6-3 double play to wiggle out of another jam.

From there on — aside from the fifth — Rutherford took over.

It was the first game back for the junior left-hander after suffering a bruised right wrist from a comebacker in the loss to Lakewood Ranch last week.

Aside from a solo home run to center field off the bat of Addyson Bruneman, the junior pitcher navigated the Mustangs lineup with ease — allowing just an infield single and a double from that point on.

“Our pitching staff is incredible,” Mellor said. “They work so hard. I know they were analyzing every batter.

“I knew we’d have a better shot this game because they’d be able to see what they had to do to improve.”

While Hartman and Rutherford did their best to quiet the Mustangs' offense, Lakewood Ranch pitcher Olivia Laney was in command of Venice’s lineup for much of the night, too.

The sophomore allowed five hits, but Venice made most of them count.

After beginning the top of the third with a groundout and a strikeout, Tatum McGrath singled, Liv Seibert reached on a fielding error and Mellor drove them both in, despite getting tagged out going for a double.

Venice added a much-needed insurance run in the fourth when a single by Bri Weimer knocked in Kayleigh Roper, who had reached base on a hit-by-pitch to start the inning, but that was about all the Indians could muster.

However, that would be all Venice would need — as Lakewood Ranch got a runner to third base in the home half of the seventh before Rutherford induced a weak pop out and struck out Olivia Ryan to end the game.

“These are the games you dream of as a kid, and as a coach, that never changes,” Venice coach Steve Constantino said. “We talked before the game, how many times do you get to play the No. 1 or No. 2 team in the country? Who gets that opportunity? It’s a chance of a lifetime.

“If you want to get any further than the district tournament you have to beat teams like this. Teams like Mitchell and Sickles and Sunlake. That’s them and we beat them tonight, so who can’t we beat?”