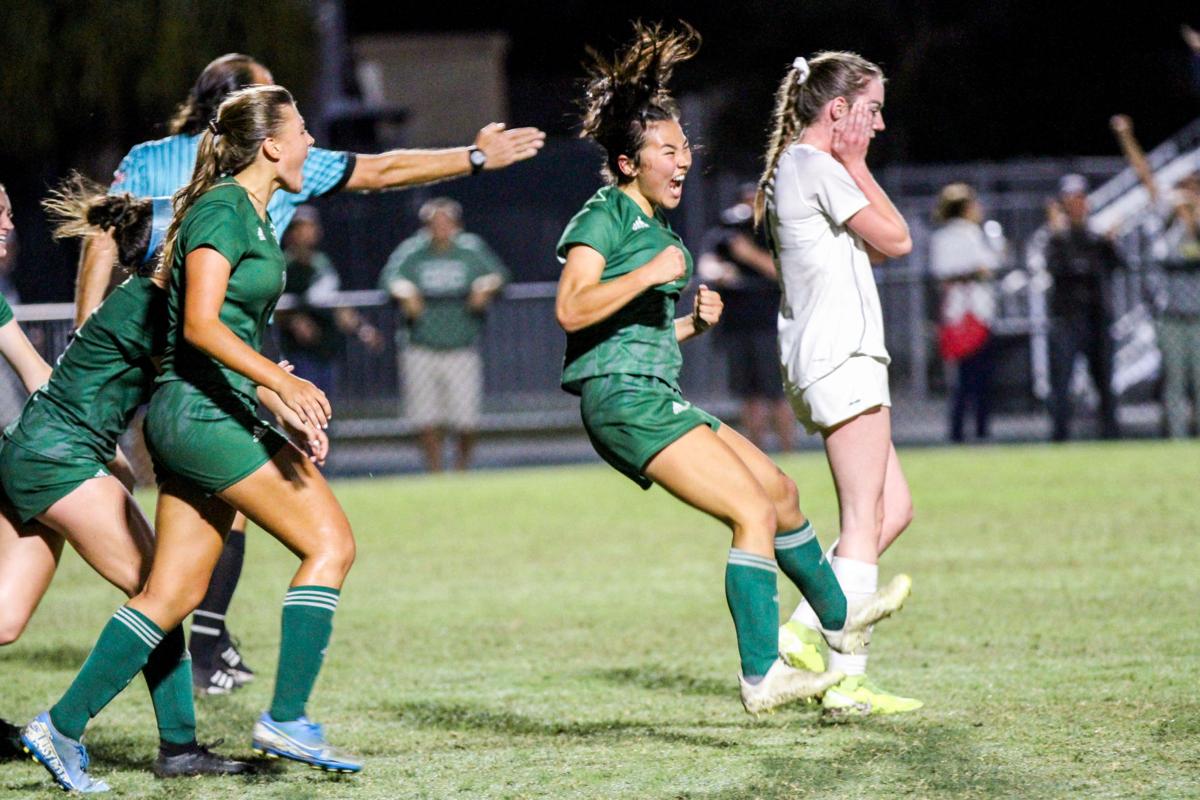 Left: Mason Schilling celebrates her last-minute goal that won Venice the regional championship against St. Petersburg. The senior forward, who led Venice in scoring, is the Sun’s Girls Soccer Player of the Year. Right: Charlotte’s Gavin Pennell holds the school records for goals allowed (1.09), saves in a season (250) and saves in a career (455). 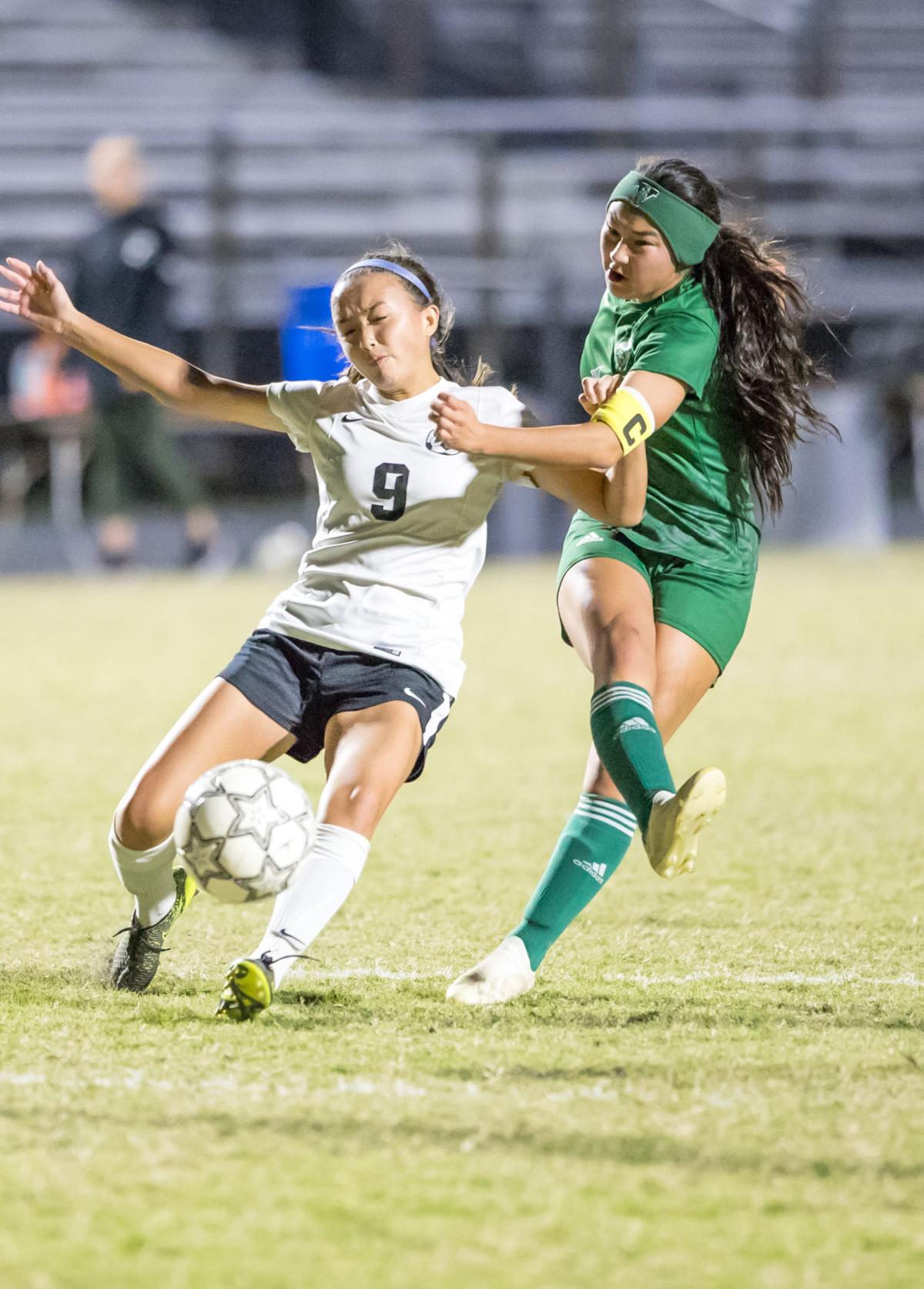 Schilling had to fight off physical defenders all season long, but still managed to score 21 goals and propel the Indians to the state title game.

Left: Mason Schilling celebrates her last-minute goal that won Venice the regional championship against St. Petersburg. The senior forward, who led Venice in scoring, is the Sun’s Girls Soccer Player of the Year. Right: Charlotte’s Gavin Pennell holds the school records for goals allowed (1.09), saves in a season (250) and saves in a career (455).

Schilling had to fight off physical defenders all season long, but still managed to score 21 goals and propel the Indians to the state title game.

There were few members of the Venice girls soccer team who took last year’s season-ending loss harder than Mason Schilling.

Schilling left the field with tears in her eyes as she watched St. Petersburg sneak past the Indians in penalty kicks of the regional championship in 2019.

For a team that entered the postseason undefeated, it was a hard ending to swallow.

“The loss to them my junior year was devastating,” Schilling, the Sun’s Girls Soccer Player of the Year, said of the regional final loss to St. Pete. “It was so upsetting. But luckily, it made the girls so much more determined this year.

“I think we all thought we would see them again. We all talked about it all season, hoping it would be them.”

Schilling and fellow seniors Kat Jordan and Jamie Gerhart-Searles wasted no time preparing for redemption, organizing captain’s practices over the summer while also playing for their club teams.

That hard work continued into the soccer season as coaches Gary Bolyard and Lynley Hilligoss created one of the most difficult high school soccer schedules in the nation.

However, the year didn’t begin as most would have hoped.

“It challenged us,” Schilling said. “We faced some adversity in the first half of the season. We started off with a losing record, and that was tough.

“When we were losing, my stats weren’t great, which was fine but it was a little discouraging. I know seeing other teams around the area, some girls were scoring 30, 40, or 50 goals and I’m over here in the teens. I think that humbled me, realizing it’s not all about scoring goals.”

After going 1-3-1 to open the year, the Indians flipped the switch heading into the winter break — going 8-0-1 to close out the regular season, including wins over top-50 teams in Florida like Bolles Academy, Ponte Vedra, Bishop Moore, McKeel Academy, Newsome and Lakewood Ranch.

That streak continued well into the postseason as Venice won its first four games by a margin of 24-4 to set up a rematch with the Green Devils in the regional championship.

For 70-plus minutes, the teams battled but couldn’t find the back of the net — until Schilling found an opening and lofted in a goal. Minutes later, the Indians were celebrating their first trip to the state tournament in years.

“It’s a great story,” she said. “I love thinking about it all the time. Our coaches set us up with a very tough schedule that prepared us for that moment, and I’d say the win was very much deserved.”

After another close win in the state semifinals over Creekside, Venice was pitted against Lourdes Academy — No. 4 in the nation — in the state championship.

Though Kiki Slattery ripped in a first-half goal to knot the score at 1-1, Schilling was man-marked from the opening whistle with little room to move, and the Indians eventually fell, 2-1.

“I think she relished it,” Bolyard said of the tough competition Schilling had to face. “In the state championship game they were all over her. They wouldn’t let her breathe. It’s unfortunate we couldn’t really take advantage of it at the other positions, but she was like, ‘Bring it on. If you’re putting that much work in to stop me, my teammates are going to make you pay.’

“That’s how she was. She wasn’t selfish. She didn’t care if she scored as long as we won games.”

Her time with Venice girls soccer is officially over, but Schilling isn’t done with the sport. This fall she’ll head up to Minnesota to play for Bemidji State University with dreams of bringing the school a national championship.

Though the Indians will certainly miss Schilling’s team-high 48 goals over the past two seasons, they’ll also miss her infectious personality and friendly nature.

“There wasn’t a player who disliked her,” Bolyard said of Schilling. “Every player looked up to her and saw her as a role model. She really took a leadership role on the field this year. There were games where she put the team on her back. With her competitiveness, she was not going to be denied. It was fun to watch.

“This season, the body of work she had, was probably one of the top seasons I’ve ever had a player have.”