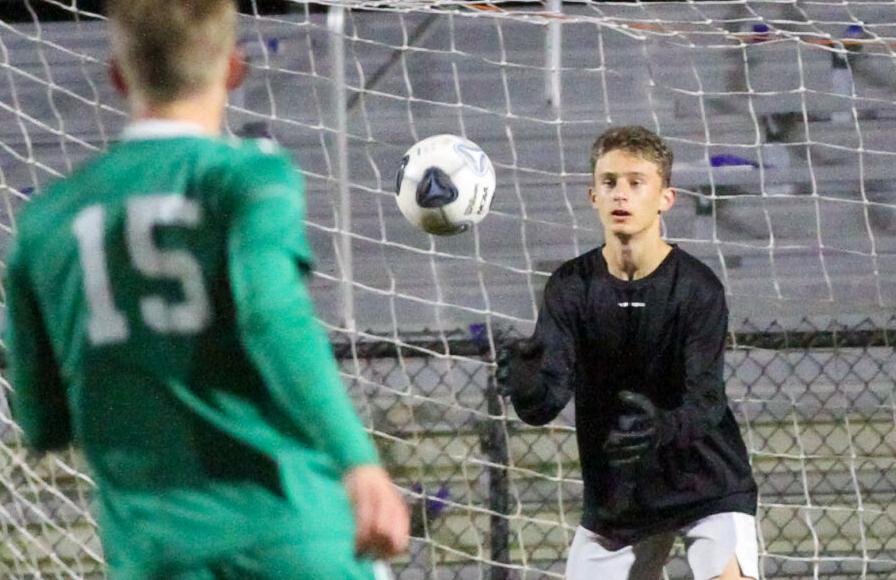 Benjamin Tary was one of several Indians players who found themselves playing a position they don’t typically play in Wednesday night’s win over the Tarpons. Tary finished with four saves in a shutout win. 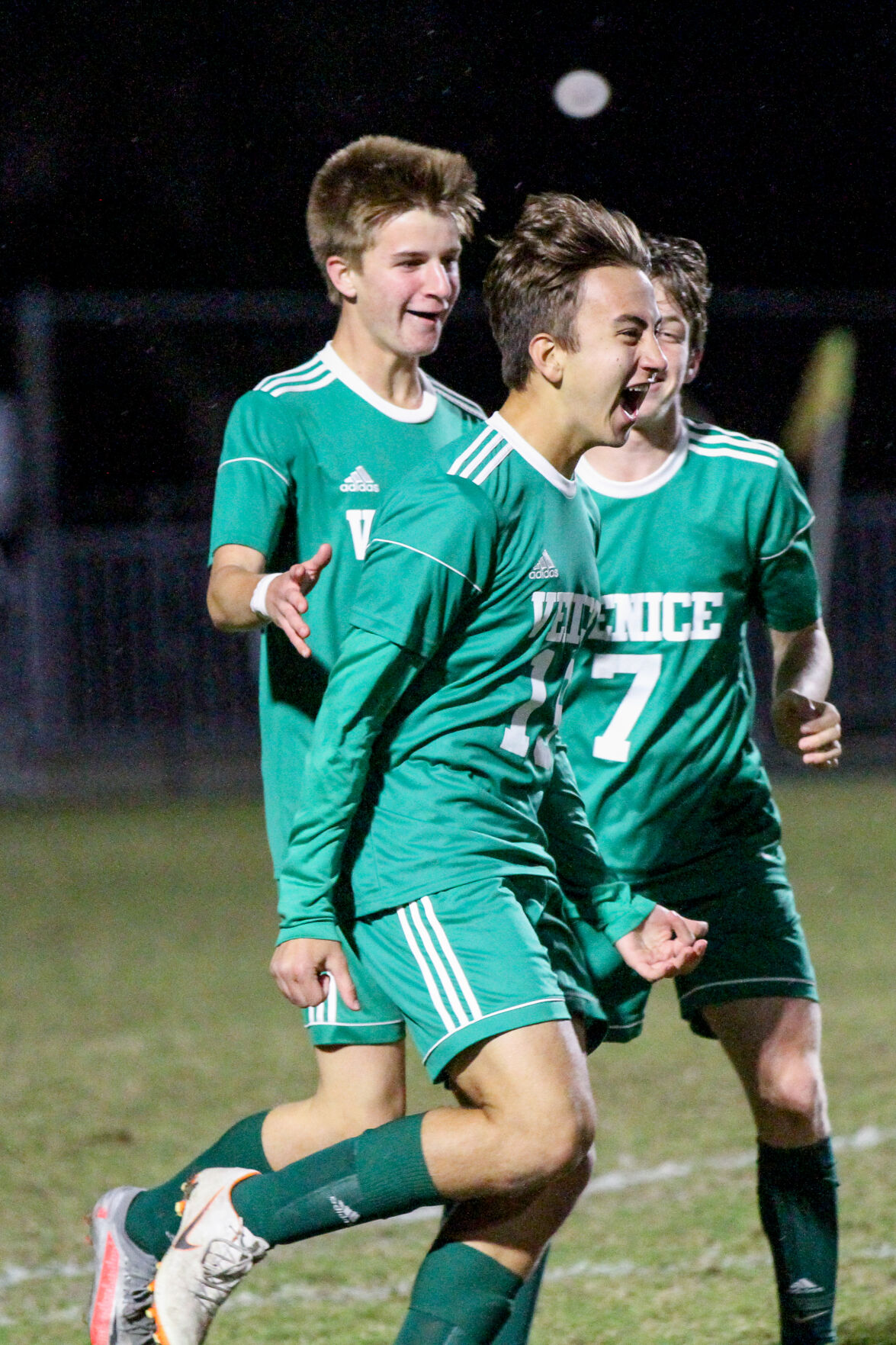 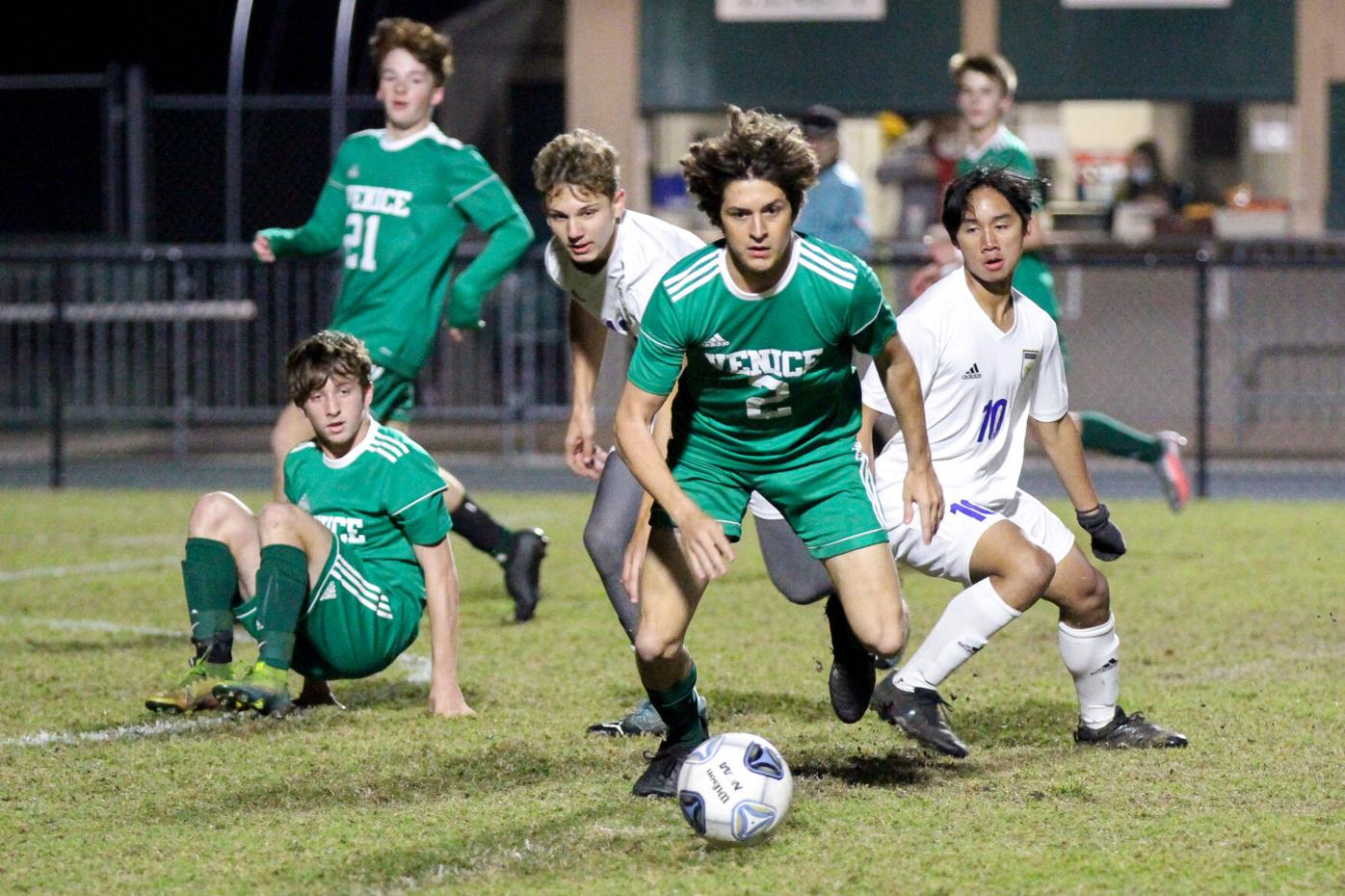 Venice striker Diego Heredia controls the ball in a skirmish close to Charlotte’s goal Wednesday night. The senior scored once in the second half before switching to play defense.

Benjamin Tary was one of several Indians players who found themselves playing a position they don’t typically play in Wednesday night’s win over the Tarpons. Tary finished with four saves in a shutout win.

Venice striker Diego Heredia controls the ball in a skirmish close to Charlotte’s goal Wednesday night. The senior scored once in the second half before switching to play defense.

VENICE — It’s rare that the Venice boys soccer team gives its coach any reason to worry, but Dave Porvaznik is nervous before each game all the same.

The first-year coach doesn’t eat at all on game days, spending the hours before a match planning and analyzing what could go wrong.

Even as Venice (9-2) was leading Charlotte for much of Wednesday night’s match en route to a 3-0 finish at Powell-Davis Stadium, Porvaznik was never at ease.

“I get nervous every game we play,” he said. “Every game. I don’t eat anything in the morning or for lunch. I just get sick to my stomach because of the nerves. I don’t think well when I’m eating, so I try to stay focused.

“So I always worry and overthink, but that’s what coaches do, I guess.”

The Indians have lost just two games all season, and after Wednesday’s win over the Tarpons, have beaten every team in their district without taking a loss.

So, why not get creative?

Porvaznik moved around several Indians players as star forward Max Mergos sat out with an illness.

“You always play your game no matter what,” Porvaznik said. “We always play our system and our style, but it doesn’t matter who we put where as long as we play together, and the boys are believing in that.

“It gives them an appreciation of, ‘Wow, this position is really hard.’ It makes them appreciate the player, not just the position.”

The moves quickly paid off for Venice as some non-starters sparked the offense.

Luca Rueda played well off the bench, scoring Venice’s first goal as he followed up a shot Tarpons’ goalkeeper Alexander Cash couldn’t handle for a score 17 minutes in.

Then, just before halftime, midfielder Connor Priede came off the bench to score in similar fashion — walking a goal into the far left corner off a shot that Cash misplayed.

The Tarpons, on the other hand, managed just two shots on goal — with neither truly threatening to find the back of the net.

“I think the first two goals we gave up were just mistakes,” Charlotte coach Greg Winkler said. “We kind of mishandled those two goals early, and I think that took the wind out of our sails.

“We haven’t played in like three weeks. We’re a little rusty.”

Venice followed up on its first-half lead with a dominant second half — out-shooting the Tarpons, 19-2, with 14 shots on goal. Venice capitalized on just one of those chances as Heredia snuck in a goal after Cash couldn’t field another shot — giving Venice more than enough of a lead to coast to the end.

Five matches remain in the regular season before the Indians play in their district tournament, but even with so much success, Porvaznik makes sure to remind his players they haven’t won anything yet.

“When things are going well and you start making changes, it doesn’t work. Don’t fix what’s not broken.”