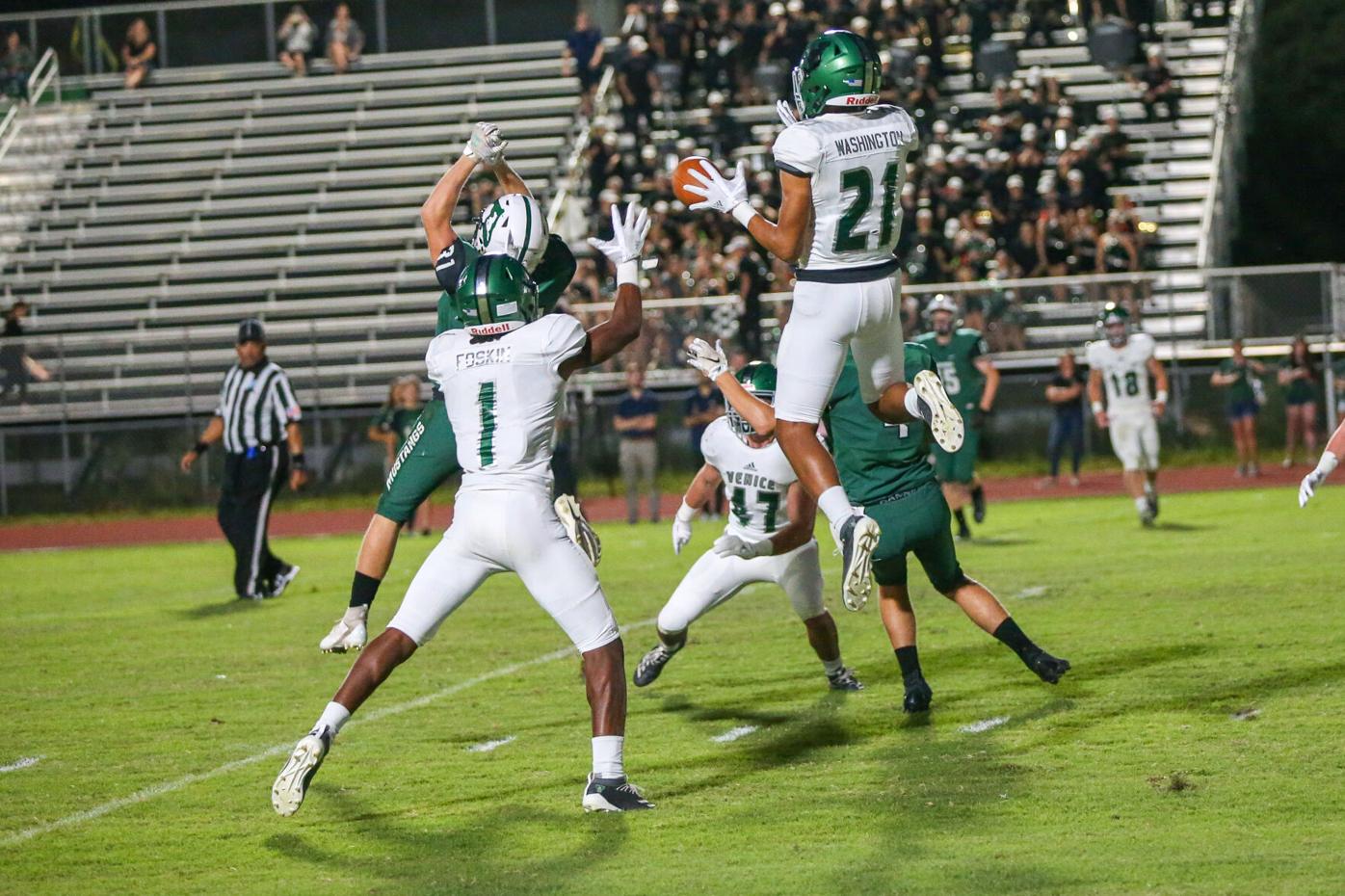 Venice defensive back Elliot Washington intercepted Lakewood Ranch last year. This year, look for him and several other sophomores to make a big impact as the Indians plan to blow out the Mustangs. 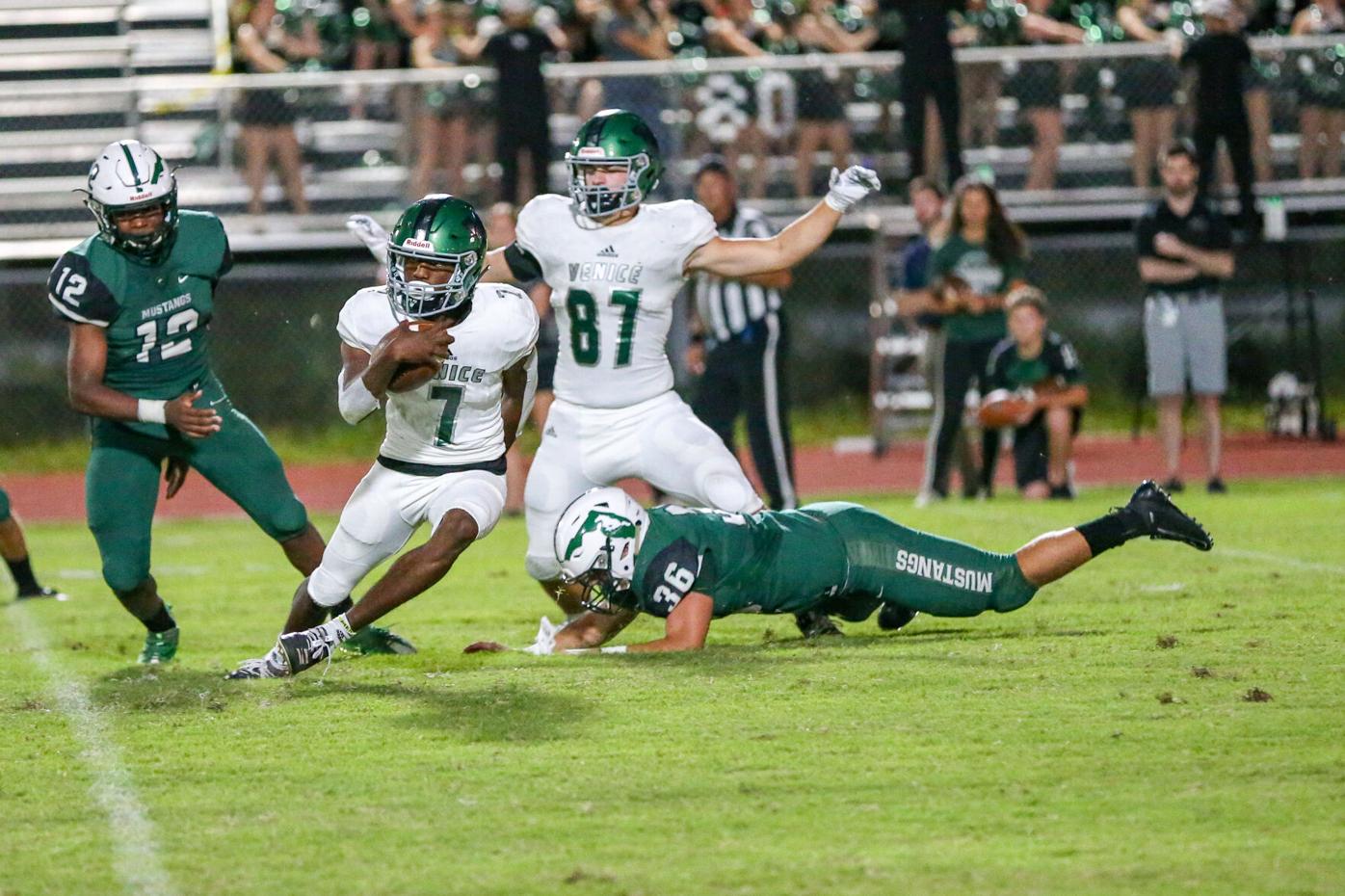 Steffan Johnson (No. 7) started his first game at quarterback against Lakewood Ranch last year. He’s been a dynamic offensive weapon for Venice ever since.

Venice defensive back Elliot Washington intercepted Lakewood Ranch last year. This year, look for him and several other sophomores to make a big impact as the Indians plan to blow out the Mustangs.

Steffan Johnson (No. 7) started his first game at quarterback against Lakewood Ranch last year. He’s been a dynamic offensive weapon for Venice ever since.

It can be easy to feel complacent after a big win.

After beating Lakeland, one of the most well-known teams in the state, by 21 points last week the Venice High football team has more than enough reasons to lose focus.

But there are no opportunities to waste for a team trying to win a state championship — especially for players who want to make more of an impact.

“I think we’ve prepared well and played well against opponents that we’re better than so far this year,” Venice coach John Peacock said. “I think the guys understand, more so this year, that they have limited opportunities and you never know when those opportunities will run out.

“I think with football being taken away from us for a little bit, they appreciate it even more. Especially on game night.”

Already with two 70-point wins under their belt, the Indians know they can steamroll through lesser opponents.

Though the Mustangs will enter Friday night at 3-1, their loss — 41-17 to Manatee — is more indicative of who they are than their three wins — over North Port, Booker and Gulf (New Port Richey).

Lakewood Ranch runs a well-balanced offense that isn’t afraid to throw the ball, but it lacks the big-play skill guys to break games open.

While this shouldn’t be much of a challenge for Venice’s first-string unit, the backups should find their way onto the field shortly after halftime.

There’s several talented up-and-coming Indians to pay attention to if and when the game gets out of hand.

“We’re always evaluating,” Peacock said of players having a chance to make an impression. “We’ve seen some kids who have earned the right to become starters through some of these games.

“(Linebacker) Logan Ballard got an opportunity against Lyman and he had a pick-six and played really well. Now, he’s finding himself on the field all the time. There’s another guy I’m kind of high on right now, George Philip. I like the way he practices and I like his effort. He’s an undersized defensive end but he’s tough.”

There will be several other players to keep an eye on, along with Ballard and Philip.

Junior quarterback Carson Smith is a likely replacement after senior starter Colin Blazek graduates this year, and he should get playing time. Sophomore receiver Keyon Sears, already a starter, could get some extra looks this game.

He already has six catches for 259 yards and 3 TDs after a big game in the win over Lakeland.

Sophomore kicker Kirill Kotov should play most if not all of the game with senior kicker Luke Wheatley sidelined with an injury.

Even though winning Friday night’s game is all but a certainty, the Indians are still working on improving — less penalties, mental errors and turnovers — with American Heritage (No. 20 team in the nation) coming to town next week.

After an ugly 0-3 start the Bobcats have turned around their offense — reeling off a 36-0 win over Parrish Community and a 37-6 win over Bayshore last week.

Bishop Verot, however, isn’t on the same level as the two winless teams that North Port has dominated. The Vikings have beaten American Heritage (Delray Beach), Lakeland Christian and Cardinal Mooney — a team that beat North Port, 42-7, earlier this year.

The Vikings have a well-balanced offense with two go-to receivers and a stable of three running backs who all get playing time.

This week will be a true test to see how much the Bobcats have grown.

The Bulldogs opened the season with a 39-0 loss at Charlotte and it hasn’t gotten much easier since. DeSoto County has yet to play a competitive football game — losing each contest by at least 39 points.

However, LaBelle might be the Bulldogs’ most beatable opponent so far. Though the Cowboys are 4-2 they’ve been exposed in their losses — losing 53-0 to Clewiston and 35-7 to Lemon Bay.

If DeSoto can find the end zone a couple of times on Friday this should be one of the better Bulldogs games of the year.

The Tarpons were undefeated and rolling through their schedule before their offense was tripped up in a 21-9 loss to Fort Myers.

Charlotte has since had a bye week to assess the loss, but it won’t be easy to get back in the win column against a tough Tigers team.

After pummeling Port Charlotte, 43-7, and Largo, 37-6, the Tigers have taken back-to-back losses to Braden River and Manatee.

The Tigers are a run-first team that relies on an athletic defense. They have star running back Sagel Hickson (357 rushing yards, 99 receiving yards, 3 total TDs) in the backfield, a handful of competent receivers and a poised senior quarterback.

Lemon Bay will get a sneak-peak at its first-round playoff opponent when it hosts the Dragons on Friday.

Lake Placid has struggled to start its year — losing three straight as it was outscored, 97-19. Though it did beat Evangelical Christian 31-17 last week, the Sentinels are 0-5.

The Mantas, on the other hand, have been blowing by their opponents. They’ve won their last two games with a combined score of 82-0 and have scored at least 27 points in all five games.

If they can keep their high-octane offense going, it should be hard for the Dragons to keep pace.