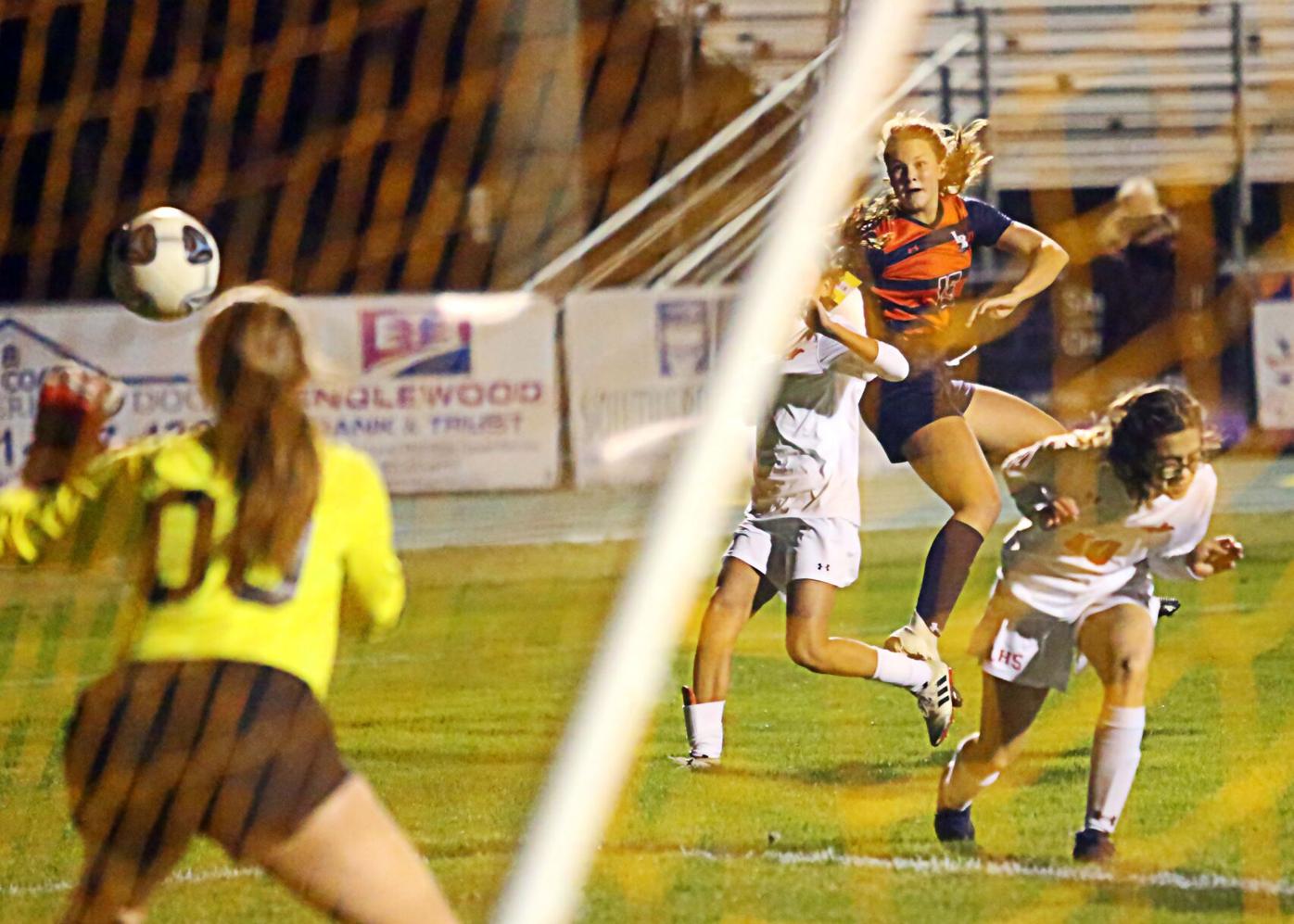 Lauren Ragazzone (orange and blue jersey) has watched a team-high 28 goals find the back of the net this year. She’ll be looking to add to that total against Cypress Creek in tonight’s regional championship game. 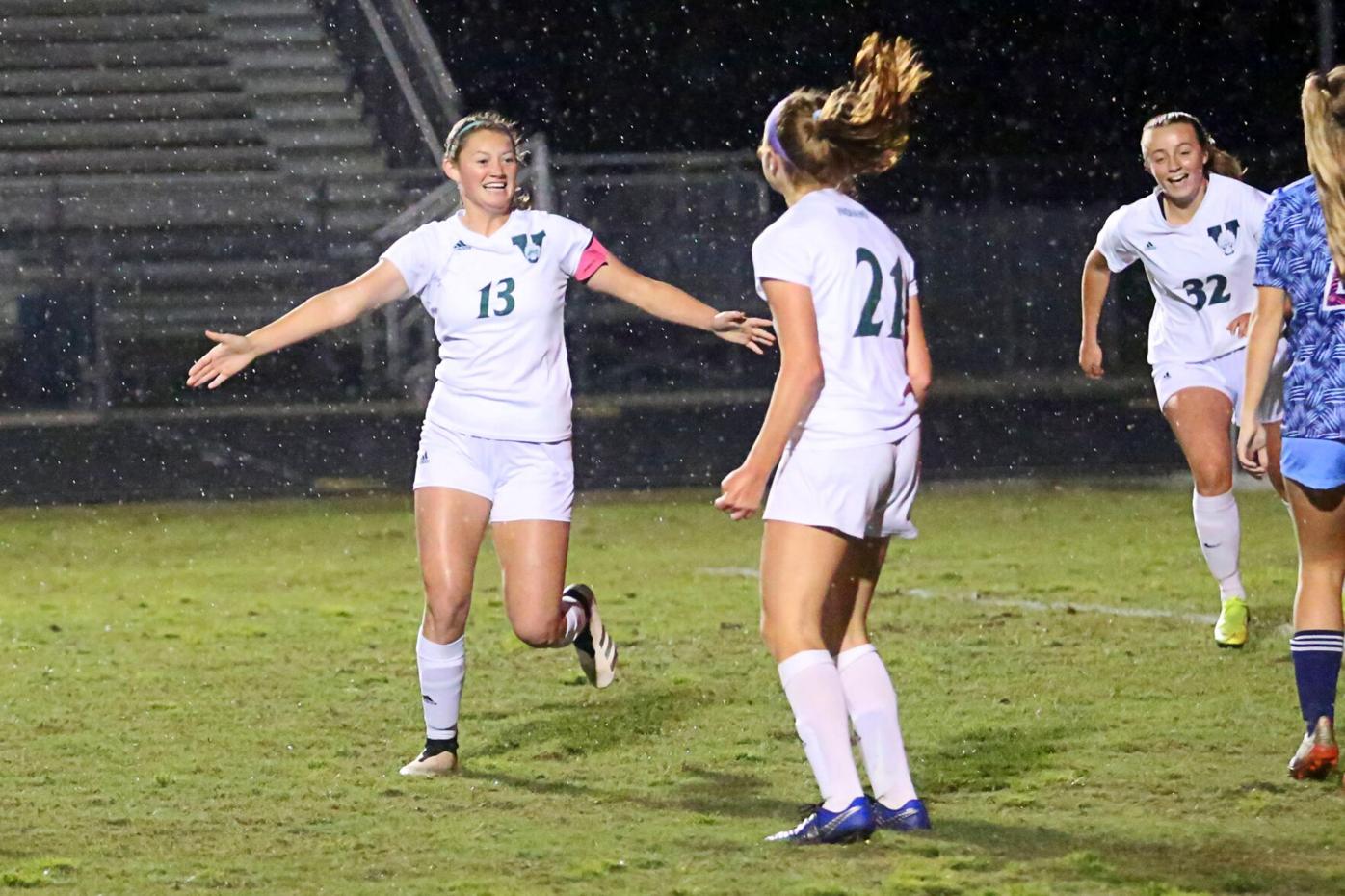 Venice forward Kiki Slattery and midfielder Eileen Solomon (No. 21) have had plenty of reasons to celebrate on the field lately, winning their last two regional playoff games, 8-1 and 8-0.

Lauren Ragazzone (orange and blue jersey) has watched a team-high 28 goals find the back of the net this year. She’ll be looking to add to that total against Cypress Creek in tonight’s regional championship game.

Venice forward Kiki Slattery and midfielder Eileen Solomon (No. 21) have had plenty of reasons to celebrate on the field lately, winning their last two regional playoff games, 8-1 and 8-0.

A year ago, both the Lemon Bay and Venice girls soccer teams won regional championships, but stumbled on their quest for a state title.

Now, both teams find themselves back in the regional final tonight as our area’s lone remaining teams.

Venice finished last year as state runners-up, winning its district and region on the way. This year, the Indians expected that to happen again, but were tripped up in the district final by North Port.

“One hundred percent that showed the girls that they cannot let their guard down,” Venice coach Gary Bolyard said of the team’s loss to the Bobcats. “They have to go out and play as if it’s their last game and be on point.”

Lemon Bay, on the other hand, didn’t make it quite as far — losing, 8-0, to Bishop Kenny in the state semifinals — but also won its district and region.

This year, though, the Mantas put together a tougher schedule that has prepared the team for this postseason run, coach Katie Cooke said.

“In a coaching career you hope to make it once, but to make it twice back-to-back is pretty exciting,” Cooke said of making it to two straight regional finals. “The road this time was a little bit harder. The girls have been playing tougher teams.

“The way that our season ended last year to Bishop Kenny, we just didn’t want to be surprised like that again. So we tested our girls and their abilities throughout the season.”

Here’s how each matchup breaks down:

Lemon Bay hasn’t seen Cypress Creek since beating them, 4-1, in last year’s regional quarterfinals. This year’s Coyotes squad has a much different look, however, with freshmen as the team’s top four goal-scorers.

“It seems like they have a really young team this year,” Cooke said of the Coyotes. “I think it definitely favors us because we’ve been to this point before and our girls know what to expect.

“We have a much older roster. We have five seniors on the field and a couple of juniors, which helps keep our younger players calm and focused.”

The defense has been solid, too, allowing just 22 goals over 14 games — including just five goals allowed over four playoff games.

Lemon Bay, on the other hand, has a much more high-powered offense.

The defense has been improved this year, too, Cooke said.

“Our defense is hands-down one of the best in the region,” she said. “They’re very tight and work well together. And, our offense communicates, we’re able to find the back of the net, and we’re quick up top.

“I think all of those things benefit us.”

If Lemon Bay wins, the Mantas will face the winer of Arnold vs. Bishop Kenny at 7 p.m. Friday.

The Indians have played well all year — losing just four times and staying ranked inside Florida’s top 100 teams all season.

However, it didn’t seem like Venice truly woke up until its district final loss to North Port.

Since then, the team has run through Riverdale and the Bobcats in the regional quarterfinals and regional semifinals — winning by a combined score of 16-1.

Venice has also already faced Wiregrass Ranch this year — winning, 1-0 — and is playing its best soccer all year at the moment.

The Bulls don’t score much — as their top three goal-scorers have combined for just 20 goals across a 22-game season.

But the defense has been tough to score against.

Wiregrass Ranch has allowed just 16 goals in 22 games thanks to an experienced group and a talented goalkeeper in Ella McGahey (121 saves and 15 goals allowed in 18 games).

“We don’t really think we’re gonna change much from what we did last time,” Bolyard said of beating the Bulls on Jan. 22. “It was a good, physical 1-0 game, and we’re not expecting anything different.

“They have a very good keeper and a very good defense. Since we changed our positioning, though, we’re more offensive-minded and our attack is so dangerous now. I don’t think they can keep up with our relentless pressure.”

If Venice wins, it will face the winner of Chiles vs. Fleming Island in the state semifinals at 7 p.m. Friday.