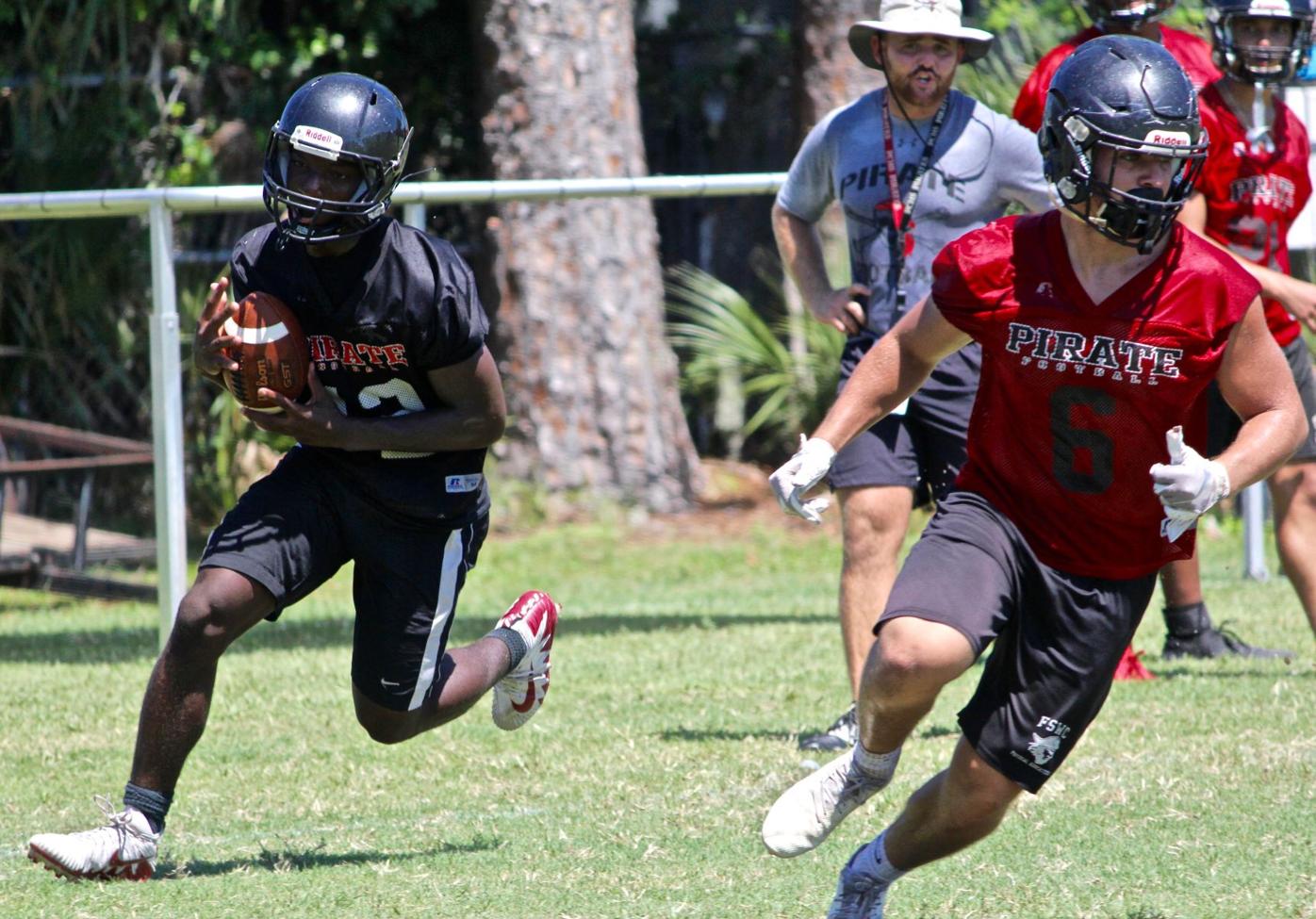 Virgil Luther (left) opened the season rushing for 77 yards and three touchdowns in a 20-point win over Hardee -- bouncing back from a tough junior year. 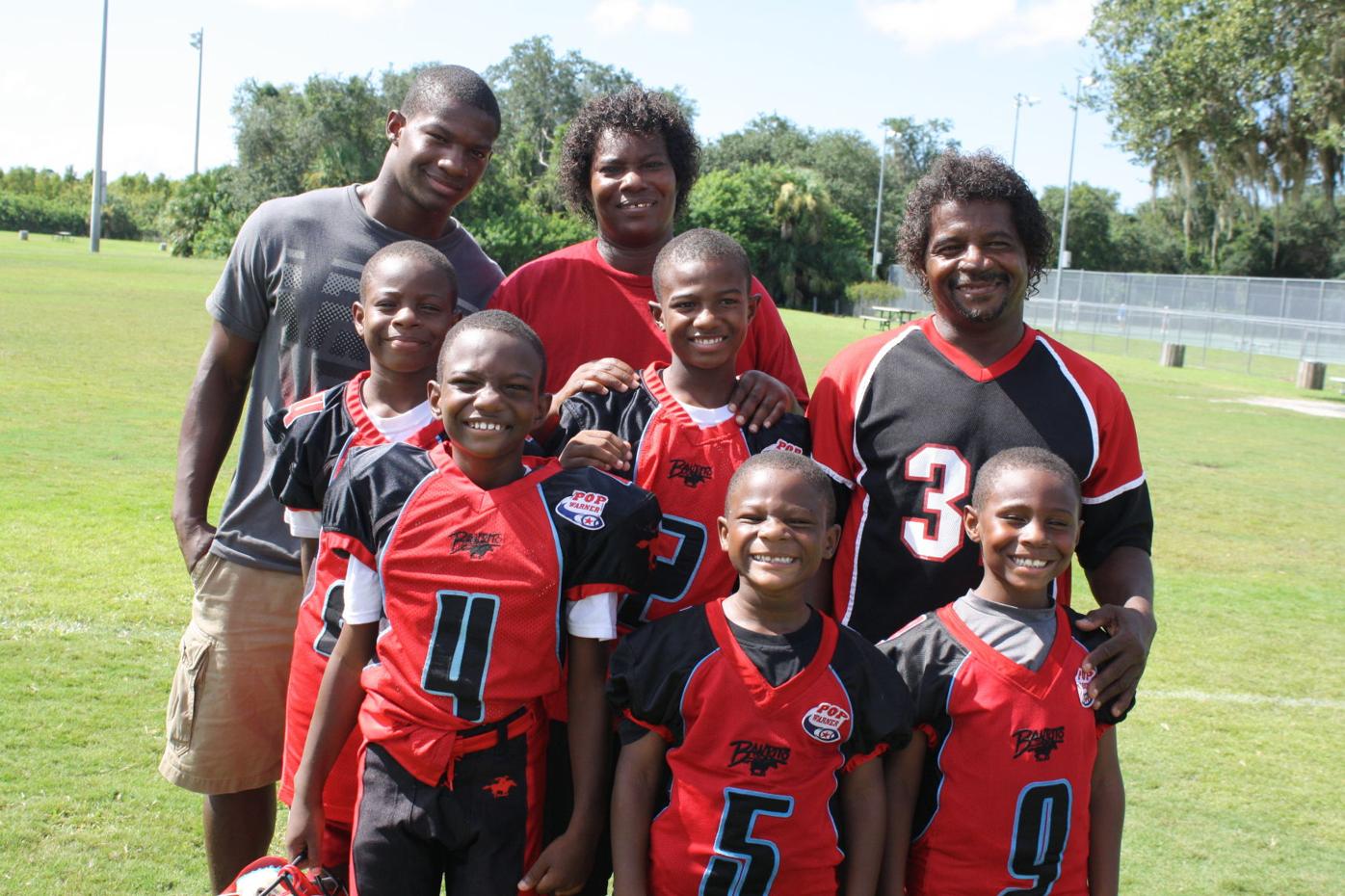 Virginia Luther has served as an inspiration to her nine children before and after her passing this December, including Virgil (No. 4), who said he plays football for her.

Virgil Luther (left) opened the season rushing for 77 yards and three touchdowns in a 20-point win over Hardee -- bouncing back from a tough junior year.

Virginia Luther has served as an inspiration to her nine children before and after her passing this December, including Virgil (No. 4), who said he plays football for her.

PORT CHARLOTTE — Virgil Luther was looking forward to finally making a name for himself on the football field last fall for the Pirates.

But just as his junior season was about to get started, a teammate fell backward into Luther and broke his ankle during the final play of the Kickoff Classic. The injury kept him out for most of his junior season.

Then, the offseason came and a much greater tragedy struck his family.

Virginia Luther, mother to Virgil and his eight siblings (seven brothers and a sister), passed away in her sleep in December.

“I’ll always have someone in my heart, and that’s my mom,” Luther said. “She’s always on my mind when I play the game. I know she’s looking down at us right now, and I do my hardest to make her proud.

“When I was younger in Pop Warner, I never liked to play football. But she would always tell me, ‘Just go out there and have fun.’ And I was like, ‘You know what? I will go have some fun.’ And what happened? I started liking football. She’s gone now, but I know she’s still watching.”

While there’s many things that Luther misses about his mother — from her unwavering support to constant presence at football games and, of course, her cooking — he doesn’t have to look far to find support. His older brother, Solomon, remained on the football team this season despite having the chance to graduate last spring. And younger brothers Samuel and Tyrell are always close by on the junior varsity field.

“Virgil handled it well,” Solomon Luther said of his mother’s death. “Working hard for her makes me proud of him, and I’m sure it makes our mom proud, too.

“Family means everything to us. Without family, I don’t think you can get somewhere in life.”

Coach Jordan Ingman recalls how Virginia made her presence felt on the field.

“She was always positive. Even if we were losing she never had a bad thing to say. That has permeated through her children as well. ... They’re the greatest people you could ever ask for.”

{div}After a season spent on the sidelines, Luther would finally get the chance to play a bigger role for Port Charlotte — he rushed 14 times for 77 yards and three touchdowns in a 46-26 Week 1 win over Hardee last Friday.{/div}

But even if his big Week 1 doesn’t turn him into the next Pirates star, he won’t be stressing over it, he said. A player that Ingman calls “unselfish,” Luther has played cornerback, safety, linebacker, a-back and b-back for the Pirates.

“He’s played five different positions for us and not once complained about any of that,” Ingman said. “Unfortunately he had an injury that set him back last year, but even through that he was nothing but positive.”

Luther spent many Friday nights at Port Charlotte High watching brothers Martin and T.J. star for the Pirates, and many Saturday afternoons at the local Bandits Pop Warner fields. He remains inspired by his family today — and hopes to be playing college football this time next year.

However, with a missed junior season and the coronavirus pandemic, there have been limited chances for Luther to put together highlight packages or visit schools or camps.

Now, with just a few games left to prove himself to college recruiters, he has as much motivation as ever.

“All of my brothers and me have always dreamed of playing in college,” Luther said.