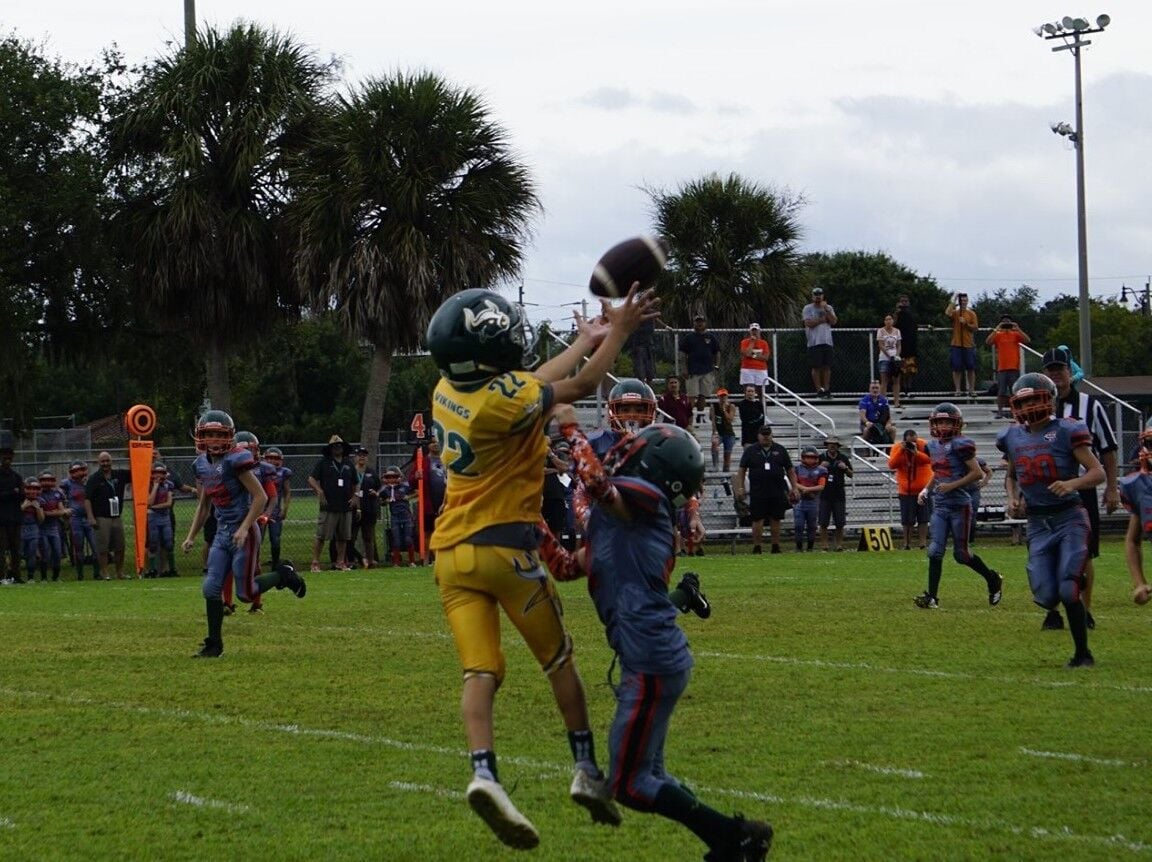 12U Crusaders player Maicen Fraser goes up for the catch to score a touchdown. 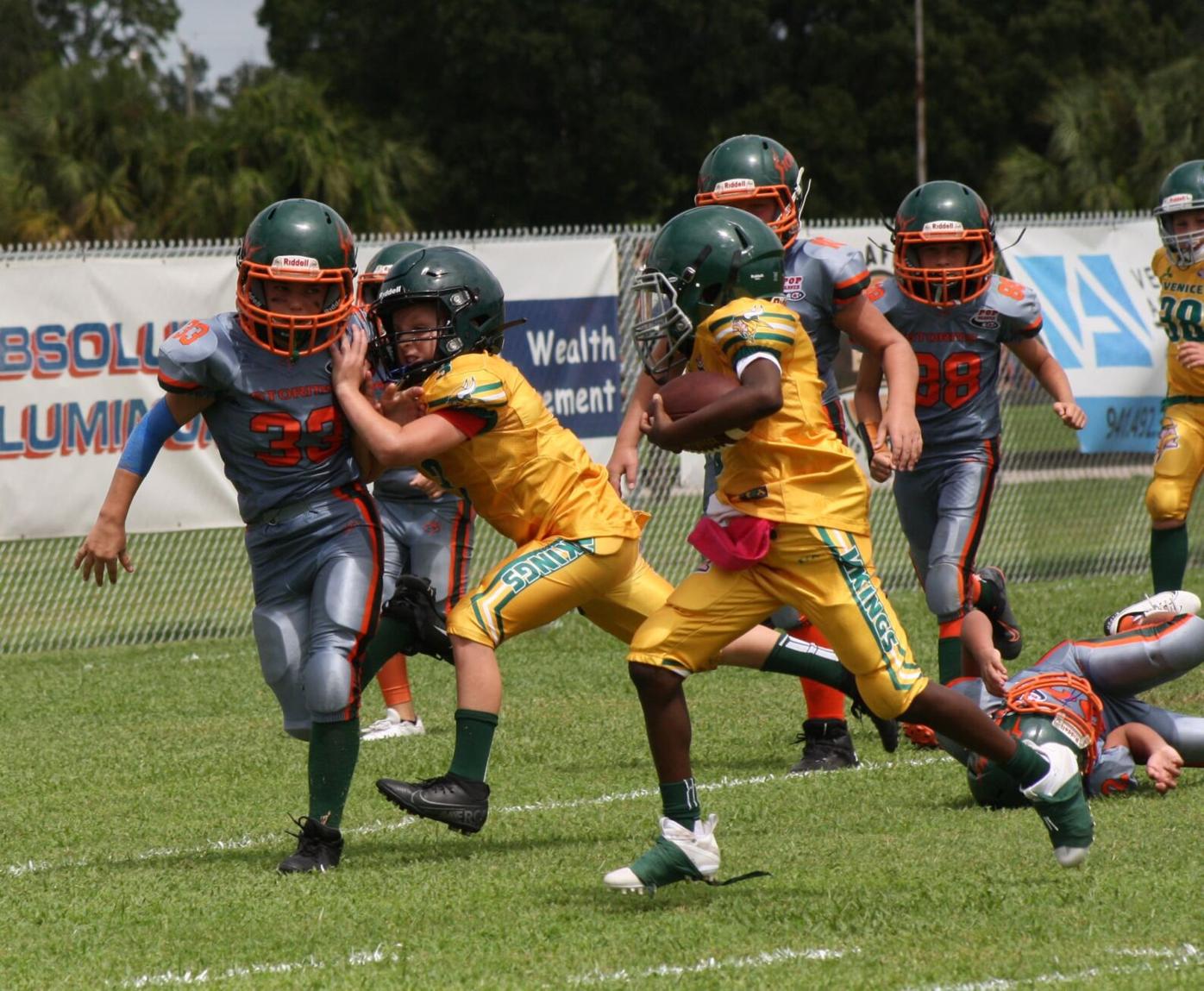 10U Lancers player Austin Bowman (No. 8) runs for touchdown with blocking from Bryce Bigelow (No. 3). 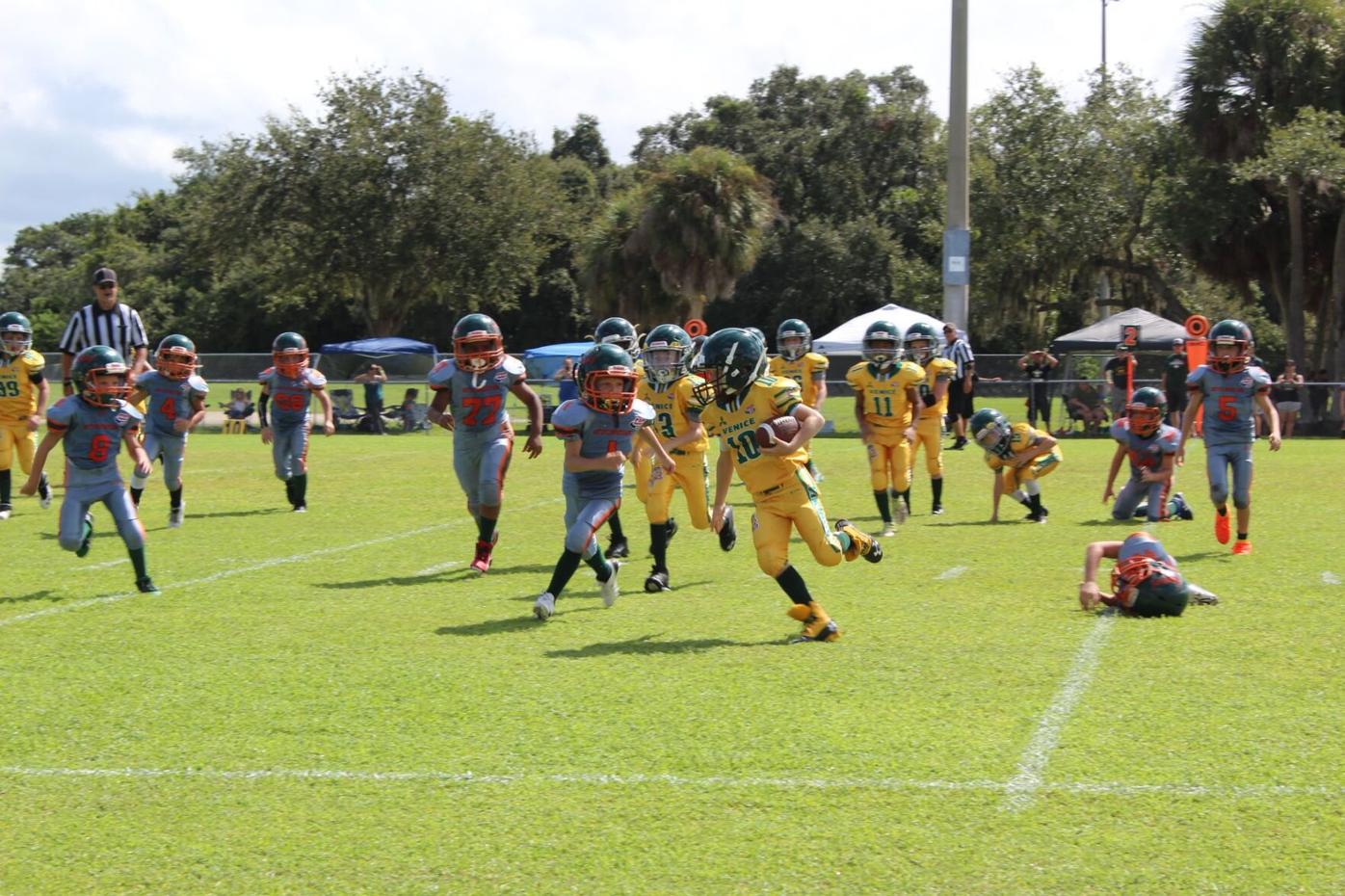 8U Knights player Levhan Alvarado (No. 10) runs the ball against Cape Youth in a 32-6 win this past Saturday.

12U Crusaders player Maicen Fraser goes up for the catch to score a touchdown.

10U Lancers player Austin Bowman (No. 8) runs for touchdown with blocking from Bryce Bigelow (No. 3).

8U Knights player Levhan Alvarado (No. 10) runs the ball against Cape Youth in a 32-6 win this past Saturday.

The Venice Vikings Pop Warner teams were back at it for Week 2 this past weekend despite some inclement weather in the area.

Still, four of the five Vikings squads took home wins including three blowouts — a 32-6 win by the Knights, a 34-6 win by the Lancers and a 34-0 shutout for the Crusaders.

The closest win of the weekend was the 14U Warriors, who were sparked by two quick touchdowns from quarterback Anthony Miller in the closing moments of the first half. They would hold on for the 21-0 win.

All Venice Vikings teams will be on a bye in Week 3, except for the Warriors, who will play the Fort Myers Firecats in Cape Coral.

The Kings were back in action on Saturday against Cape Youth.

Kyle (Kage) Rockafellow played strong on the offensive line, which led to a couple of long runs while Kash Happy stepped up early making his presence known on defense.

After a few halftime adjustments the Kings moved the ball down field at a faster pace and the defense came up with key stops led by Rhett Will at defensive tackle. In the end, the Kings came up short, but coaches commended the players on their effort and not giving up.

In nearly tropical storm conditions, the Venice Knights led the Cape Youth Storms all game on their way to a 32-6 win to improve to 2-0.

The Knights’ offense scored on the first play of the game with a 65-yard scamper from running back Nick Stough. The offense wouldn’t be stopped as seven other runners including Abel Seed, Gage Wolvington, Wyatt McCord, Colton McCord, Kade Swafford, Ayden Powell and Lev Alvarado ran all over Cape Youth — scoring another 5 touchdowns.

The defense, with big hits by Major Bell, was stiff as it allowed only one Cape Youth score. The Knights will look to continue their hard fought winning streak as they face the Naples Hurricanes in two weeks.

The Venice Lancers hosted the Cape Youth Storms on Saturday and ran all over them on the way to a 34-6 win.

The Lancers moved the ball right down the field on the first drive, ending with an Elijah Gooden 6-yard touchdown run. Gooden also scored on the next drive with a 4-yard run behind great blocks from offensive linemen Russell McCord, Brantley Gagne and Bennett Thompson.

Malachi Montgomery and Alton Cleveland had several runs in the blowout victory. Late in the third quarter Bryce Bigelow had a 65-yard touchdown run.

The defense was led by Matthew Raney, who had five tackles for loss and forced a fumble on a key third down play. Gavin Murphree, Austin Bowman and Bigelow also had several tackles.

Next week the Lancers will have a bye before they travel to LaBelle to face the Naples Hurricanes on Sept. 26.

The Venice Crusaders hosted Cape Youth on Saturday at Letson Stadium and dominated all facets of the game as it won, 34-0.

The first quarter was a wet and soggy mess. The defense came up big with two fumble recoveries and stopped Cape Youth short of the end zone on two long drives.

With three minutes to go in the first quarter, running back Makai Barnard found the end zone on a 38-yard touchdown run down the right side of the field with some outstanding blocks from Landyn Neri, Myka Akers and Daniel Crane.

In the second quarter the rain picked up and became very heavy at times. With neither team able to move the ball, the Crusaders held their 7-0 lead into halftime.

On the first offensive possession for the Crusaders out of the half, running back Tanner Ruh found some space down the left side of the field as he ran 57 yards for a touchdown behind some outstanding blocks from Troy Morgan, Aidan Milmore, Colton Vanover and Aidan Gartley. The extra point was added by tight end Zeke Settles to push the lead to 14-0.

After the Crusaders defense forced a punt, found wide receiver Maicen Fraser down the left sideline for a 43-yard pass and catch for the touchdown. The extra point was added by running back Niko Maldonado to make the lead 21-0.

After Cape Youth fumbled the kickoff, Venice took over on its own 35-yard line. On the next play, quarterback Andrew Vanderpoel had plenty of time behind some great pass blocking from Ayden Guerra, Zakarey Wendt, John Will, Dev Patel, Megh Patel, Anthony Beckom, Joseph St. Pierre, Kyle Sauer and Robert Nowlan. Vanderpoel was able to find a wide open Julius Evans for a 65-yard pass and catch touchdown. The extra point was no good, making the score 27-0.

Late in the fourth quarter, Cape Youth had the ball one last time when its running back fumbled the ball. It was scooped up by Barnard who took it for a 42-yard fumble recovery touchdown. The extra point was added by Vanderpoel to cap the scoring at 34-0.

The Crusaders are on a bye next week and will be ready to play again in two weeks in Immokalee.

The Venice Warriors used a scoring burst at the end of the first half to pull away, 21-0, over the Cape Youth Storms this past weekend.

After a scoreless first quarter the Warriors drove down the field behind strong offensive line play by Larry Dagnon, Keshawn Reid, Orion Crouch, Christian Taylor, Jameson Teuscher, Collin Carter and Ethan Hawkins. They pounded away down to the Storm 5-yard line, but couldn’t get in for the score, due to a fumbled snap.

The game remained scoreless until with just 35 seconds remaining in the first half quarterback Anthony Miller connected with Hawkins on a tremendous catch in the back of the end zone for a 19-yard touchdown. The Storms were eager to even the score before the end of the second quarter, but fumbled the ball in the backfield on their first offensive play from scrimmage after the kickoff, giving the Warriors the ball at their own 17-yard line. Two plays later and with only 11.6 seconds to spare, Miller went around the right side and scored on a 15-yard run. The two quick scores gave Venice a 15-0 advantage at the half.

In the third quarter the Warriors defense remained strong, but due to some miscues and penalties, the offense was unable to add to its lead.

With 6:07 remaining in the game, running back Tayler Akers ran the ball across the goal line on a 5-yard rush. Akers had several big runs on the scoring drive. Cornerback Brycen Fraser recorded two interceptions in the closing minutes. The Warriors advanced to 2-0 on the season with the big win.

This Saturday they will travel to Cape Coral (Cape Jr. field) to go head-to-head with the 2-0 Fort Myers Firecats.