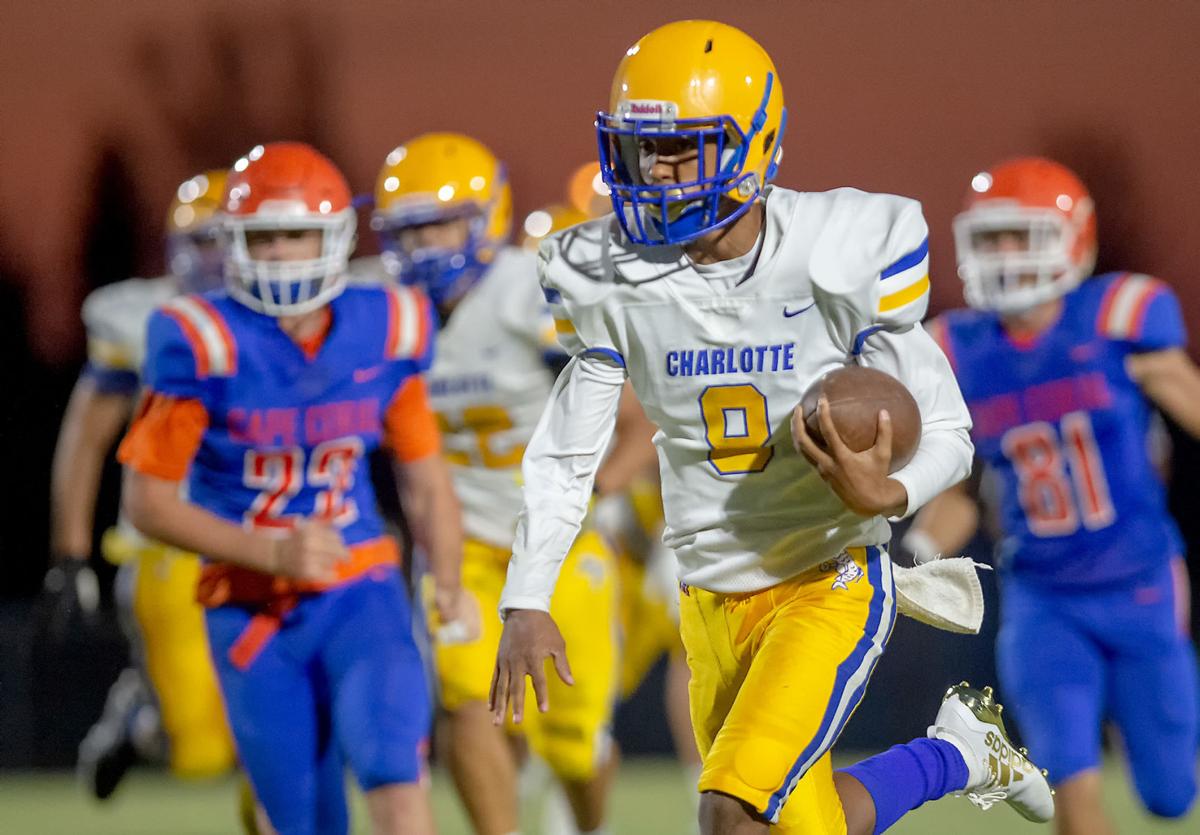 Charlotte’s Keon Jones will have a chance to take another step as a defensive playmaker for the Tarpons in 2020 — possibly replacing the ball-hawking ability of Jeremiah Harvey in the secondary. 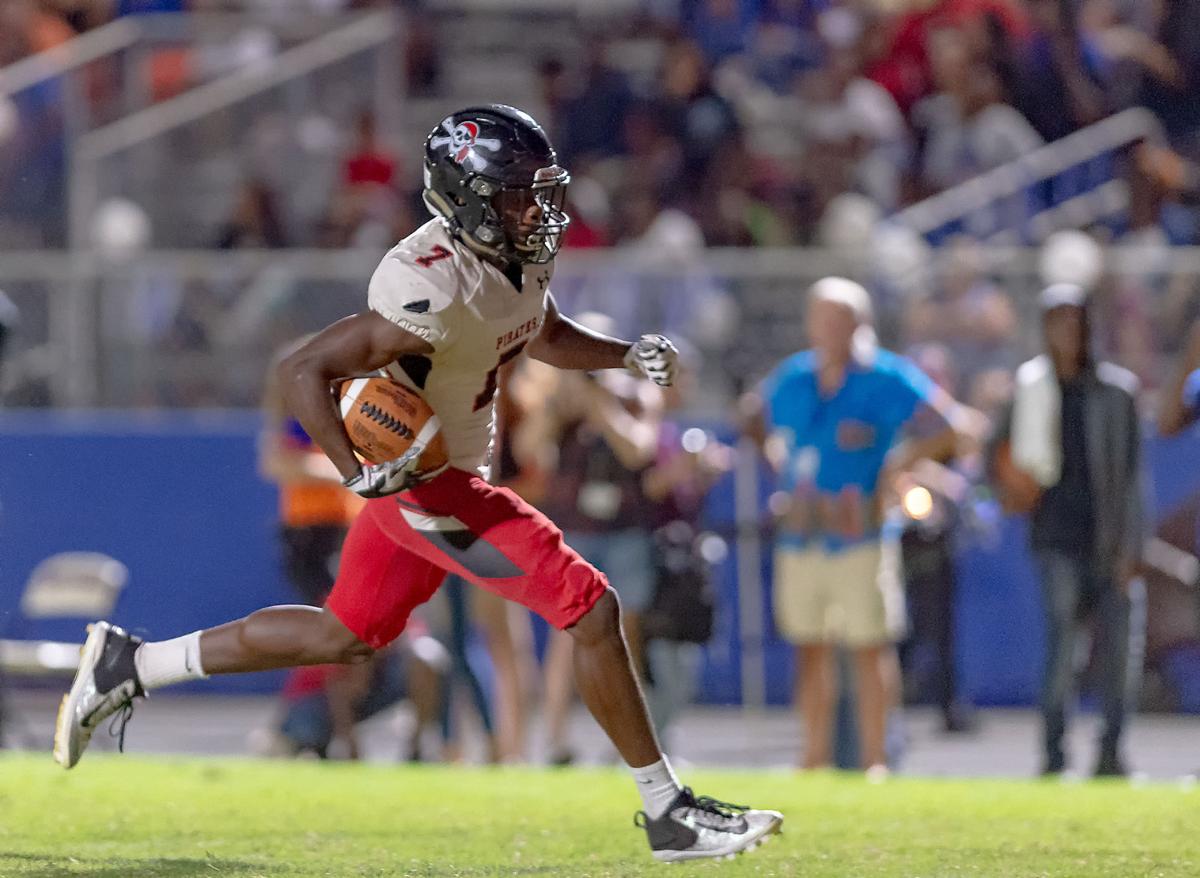 Port Charlotte’s Solomon Luther has done it all for the Pirates — playing offense, defense and special teams. This year, he’ll likely be asked to run a little more along with his brother Virgil Luther as the team looks to replace bruiser Ja’Nyrein Washington.

Charlotte’s Keon Jones will have a chance to take another step as a defensive playmaker for the Tarpons in 2020 — possibly replacing the ball-hawking ability of Jeremiah Harvey in the secondary.

Port Charlotte’s Solomon Luther has done it all for the Pirates — playing offense, defense and special teams. This year, he’ll likely be asked to run a little more along with his brother Virgil Luther as the team looks to replace bruiser Ja’Nyrein Washington.

For the first time in months, high school football players will meet as a team once again as voluntary summer workouts begin throughout southwest Florida today.

After missing several weeks of workouts, scrimmages and the annual spring game, players will finally begin working together toward the 2020 season.

Several new spots are open for the taking, as is the case every offseason, and the fight to earn playing time is about to begin.

These are some of the most influential position battles to monitor this summer:

This position isn’t defined on a depth chart, but everyone knows who that player is when they take the field on Friday nights.

In 2019, those players were Jeremiah Harvey and Malakai Menzer — two senior leaders who made big plays on both sides of the ball.

That role is now up for grabs with Harvey and Menzer no longer playing for the Tarpons.

It’s likely to be a defensive back as the Tarpons are stacked at the position — with Tavi Kelly, Keon Jones and Jaden Opalach returning.

The Pirates have a record-breaking quarterback returning under center in 2020 in Logan Rogers, but 1,000-yard rusher Ja’Nyrein Washington won’t be back.

If Port Charlotte wants to keep its offense multi-dimensional, it’ll need to find another weapon like Washington to keep pressure off Rogers.

The Luthers have supplied Port Charlotte with talent for years, and it appears one or two of them might be the answer at tailback.

Solomon Luther ran the ball, caught passes, blocked kicks on special teams and played defense for Port Charlotte last year. He might be asked to focus more on running the ball this year alongside brother Virgil Luther.

Virgil sat out much of last year with a leg injury he sustained in the preseason classic. He was primed to have a prominent role at corner before the injury, but this year looks to make the switch to offense.

If the Indians had an obvious weakness in 2019 it was its struggles in stopping the run. Venice tried to replace three All-Area defensive lineman from the past season, but didn’t find much success.

However, that could be a different story this year as promising freshmen players Trenton Kintigh and Damon Wilson Jr. will be joining the varsity team. With experienced players in Wes Piggins and Charles Bowens returning, whoever starts out of this group should make a big impact for Venice.

The Mantas struggled out of the gate as quarterback Austin Andrle suffered an injury early in the year. However, backup Jason Hogan found some success of his own in his place.

After a late rally to make the playoffs, Lemon Bay will be looking for consistency on offense with at least two good options to choose from.

In 10 games, Hogan threw for 396 yards and 3 TDs to 6 INTs, running for 486 yards. In four games, Andrle threw for 88 yards, no TDS and 1 INT, running for 293 yards. But regardless of who wins this competition, the Mantas have shown it’s good to have more than one quarterback.

William Maybell and Yarzmen Wesley were do-it-all players for the Bulldogs offense in 2019 as they were utilized in both the running and passing game.

Though they’ve both now moved on from DeSoto County, there are a few players ready to take their place.

Jakeemis Pelham flashed that ability last season as a sophomore, using a quick burst and elusive running to rush for 302 yards and 3 TDs. He only caught two passes but made the most of them — turning them into 139 yards and 2 TDs.

Along with Pelham, fellow sophomore Nelson Daniels also showed his athleticism — rushing for 84 yards and a game-winning touchdown while catching one pass for an 18-yard touchdown.

It’s almost impossible to have true success in football without a good quarterback.

Midway through last season it looked like the Bobcats had found their answer in Kevin Riley — a dual-threat option who ran for 604 yards and 3 TDs in seven games at the position.

Though Riley’s athleticism breathed some life into the North Port offense, it resulted in just one win.

With a “new” coach in Billy Huthman in charge, it’s likely that the quarterback position — which saw three players start in 2019 — will be heavily evaluated.

Along with Riley, two other juniors — Zach Kelly and Devin Prokopiak — took snaps under center last year. However, Riley was the only player at the position to score a touchdown.