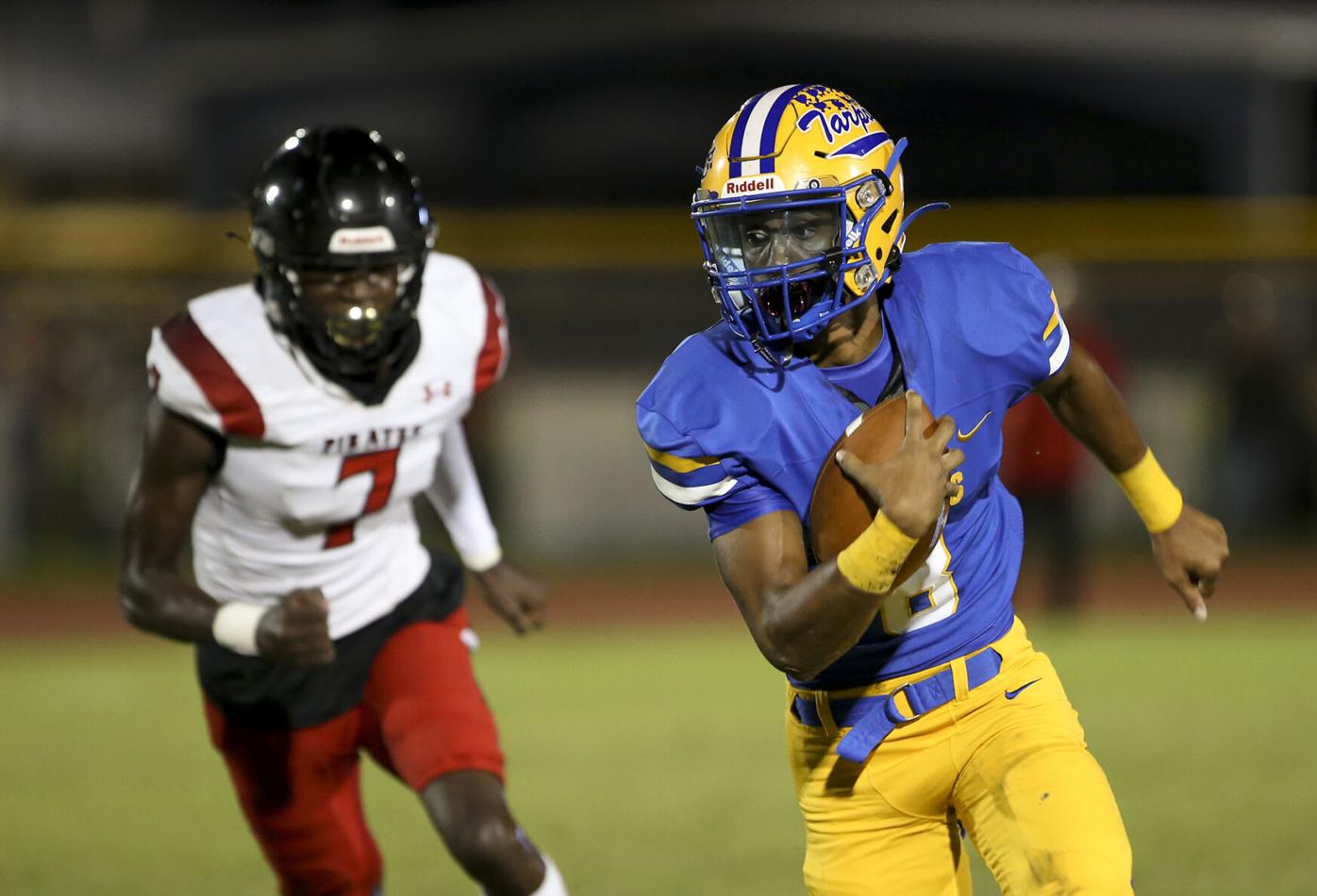 Charlotte quarterback Keon Jones was given limited reps at quarterback this offseason before being unexpectedly thrust into the starting role for Week 1. 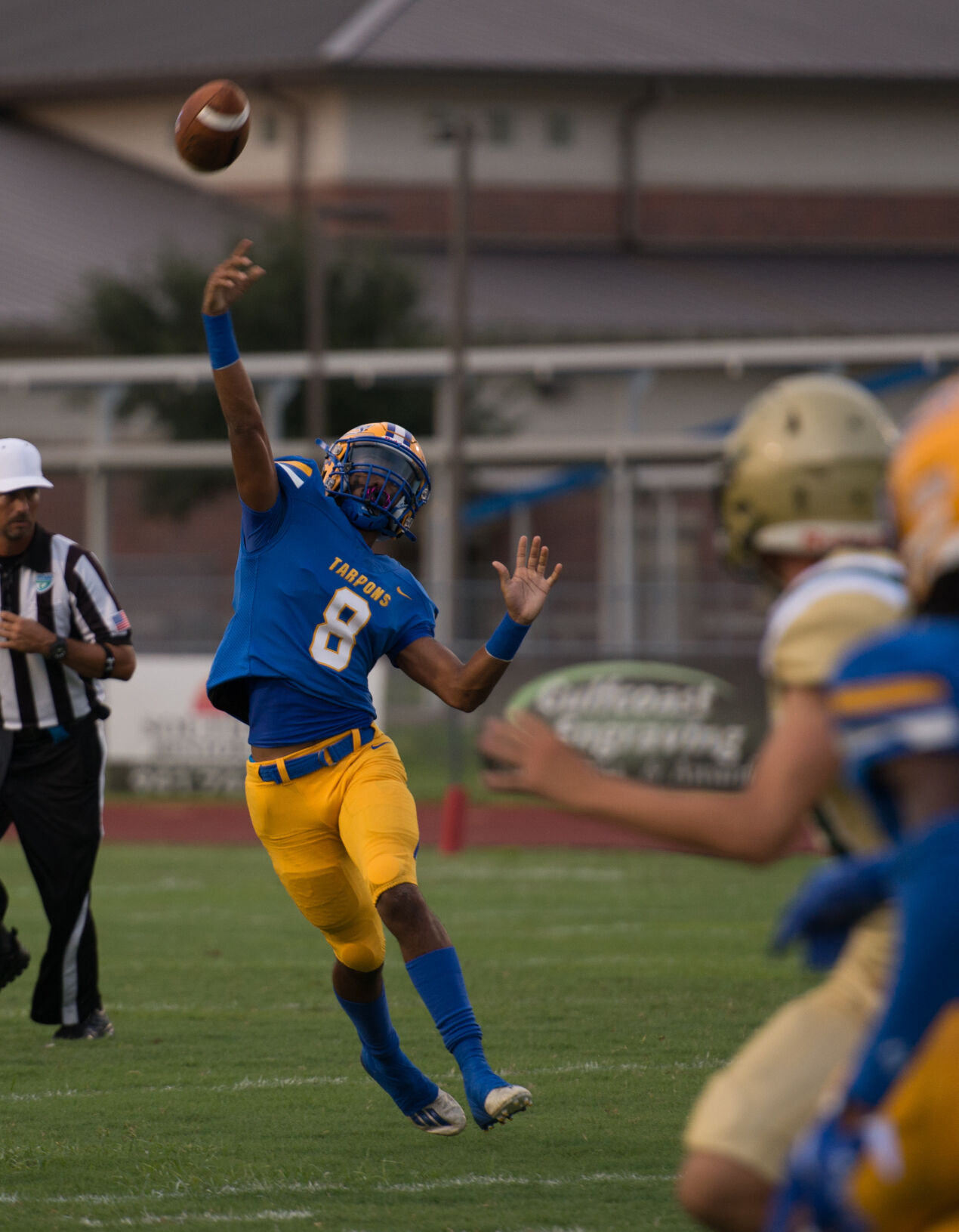 Keon Jones will look to continue Charlotte’s undefeated start when the Tarpons travel to play at Dunbar tonight in an important district matchup.

Charlotte quarterback Keon Jones was given limited reps at quarterback this offseason before being unexpectedly thrust into the starting role for Week 1.

Keon Jones will look to continue Charlotte’s undefeated start when the Tarpons travel to play at Dunbar tonight in an important district matchup.

PUNTA GORDA — A little over a month ago, the Charlotte High coaching staff thought it had its offense figured out.

Then, a pair of ugly losses in the Kickoff Classic jamboree — in which the offense did not score a touchdown — necessitated a quarterback change, with the staff pivoting from Mason Henderson, a pocket passer, to do-it-all athlete Keon Jones.

Though Jones has lived up to the challenge for Charlotte (2-0, 130 in FL), the senior and his offense will face one of their toughest tests when the Tarpons travel to play at Dunbar — a top challenger for the district title— tonight at 7 p.m.

“I was the backup behind John Busha (last season), so I was getting reps in practice and everything,” Jones said of his familiarity with the position. “I was ready to step up and do the job.

“I was confident because I’ve played quarterback before. Growing up, this was my main position. I played it my freshman year, too, before switching. So I was ready.”

Through two wins — over Island Coast and Port Charlotte — the dual-threat senior has completed 12-of-21 passes for 153 yards while also carried the ball 19 times for 134 yards and a touchdown.

Jones has a youthful array of options at receiver — including freshman Seven Bullock, sophomore Brady Hall and junior Brayan Augustin — along with a trio of running backs — Troi McClary, Connor Trim and Deven Jones — who have help share the load, too.

“Usually it is hard (to switch quarterbacks between games),” said Hall, who leads the Tarpons with five receptions for 90 yards. “Keon seemed pretty prepared, though. I have all the confidence in Keon. I’ve seen him do it all.

“He just fit right in and has handled the role pretty well.”

While the offense has been a work in progress for Charlotte, the defense has dominated thus far.

The Tarpons have recorded 13 sacks, defended eight passes and have forced three turnovers while holding both of their opponents to 10 points or less.

Dunbar, however, should be one of the Tarpons’ toughest opponents this season.

They feature a balanced offense that operates behind an offensive line full of 300-pound players, or close to it.

Though the team has also used two quarterbacks — Daveon Palmer and Landon Winterbottom — Palmer has seen the bulk of the work, completing 20-of-40 for 282 yards and three touchdowns to one interception. Neither QB has generated more than 10 yards through the ground game.

Anthony Benjamin (10 rec. for 151 yards, 2 TDs) leads a receiving corps that includes five players with at least one touchdown reception.

The Tigers are just as deep on defense.

Shawn Russ, a 4-star cornerback with offers to Florida, FSU, Arkansas, Georgia Tech and Maryland, has recorded two of the team’s four interceptions.

Dunbar has talent up front, too. Demetrie Morgan has three of the team’s 11 sacks to his name.

Neither team’s hot start, nor anyone’s stats, however, will matter much when the Tarpons travel down to Fort Myers tonight as they hope to take their first step toward a district championship.

“They know what’s expected,” Tarpons head coach Wade Taylor said. “This is our first district game, and the kids know we’re shooting for a district title. We have a pretty good football team, but we’re gonna have to be on our ‘A’ game against (Dunbar).

“The kids know what’s at stake. If we want to win a district title and we want to go to the playoffs, it’s gotta start with Dunbar.”

The Pirates have had as challenging a start to the year as anyone could have expected in Port Charlotte.

The Pirates’ Week 1 game with Dunbar was canceled due to the Tigers’ COVID-19 issues.

Then, after a lightning-heavy week of practice, the team had to play at Charlotte — its cross-county rival — to open the season.

Port Charlotte bounced back with a 17-7 win over Southeast last Friday and it might get a little easier this week.

Bishop Verot would be winless if not for a one-point win over Lely, losing in blowout fashion to Dunbar and IMG Academy (White) in the past two weeks.

A run-heavy team with a freshman quarterback in Carter Smith, Bishop Verot may give Port Charlotte opportunities to control the game early.

Indians football coach John Peacock doesn’t believe his team is looking beyond Sarasota, even if they beat the Sailors, 71-0, last year at Powell-Davis Stadium.

The cross-county opponents will open up district play Friday night in a matchup of two undefeated teams.

Running back Jarmel Holloway has given the offense balance as he’s carried the ball 23 times for 146 yards and four scores.

Sarasota has been nearly unstoppable in the last two weeks, but the wins have come over lesser competition. North Port is ranked No. 349 in FL while Booker is ranked as the 379th.

The schedule won’t get much easier for the Bobcats this week as Palmetto Ridge — the team that eliminated Charlotte and Port Charlotte in last season’s playoffs — comes to town.

The Bears are just 1-2 and will be without recently suspended head coach Chris Toukonen, but are still a formidable foe.

Palmetto Ridge has leaned heavily on running back Jaden Booker — 77 carries for 614 yards and 3 TDs through three games.

Though quarterback Hosea Booker has attempted 35 passes, he’s completed just 16 of them and has thrown two interceptions.

North Port, on the other hand, is still figuring out its best fits on both offense and defense as it tries to stop is two-loss slide.

The officials shortage continues to impact high school football in our area — moving this local matchup back a day from Friday.

When or where the game is played, however, should do little to change the on-field action.

Lemon Bay has gotten off to a red-hot start in which it has outscored its competition, 93-6, over a pair of weaker opponents in Saint Stephen’s Episcopal and Bayshore.

The Bulldogs have also won a game, beating Okeechobee in the season opener, but suffered a tough 42-39 loss to Estero last week.

Though it seems like the rebuilding Bulldogs are still at least a year or two behind the surging Mantas, all bets are off when it comes to local matchups.