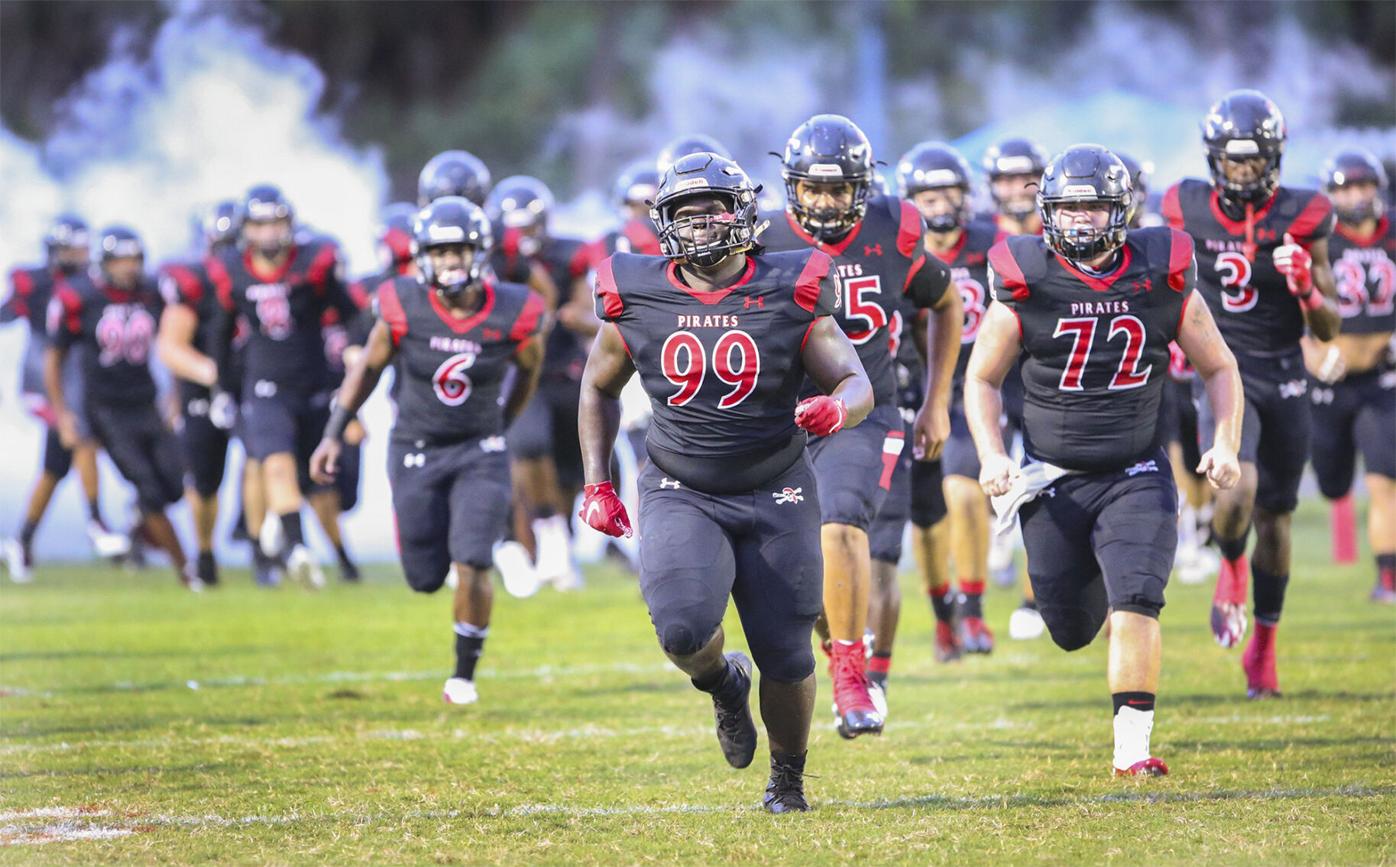 Dekwann Martin (99) leads the Port Charlotte Pirates to the field to face the DeSoto Bulldogs before last Friday’s blowout win. This week, the Pirates will be in for one of their toughest challenges of the season in the Palmetto Tigers. 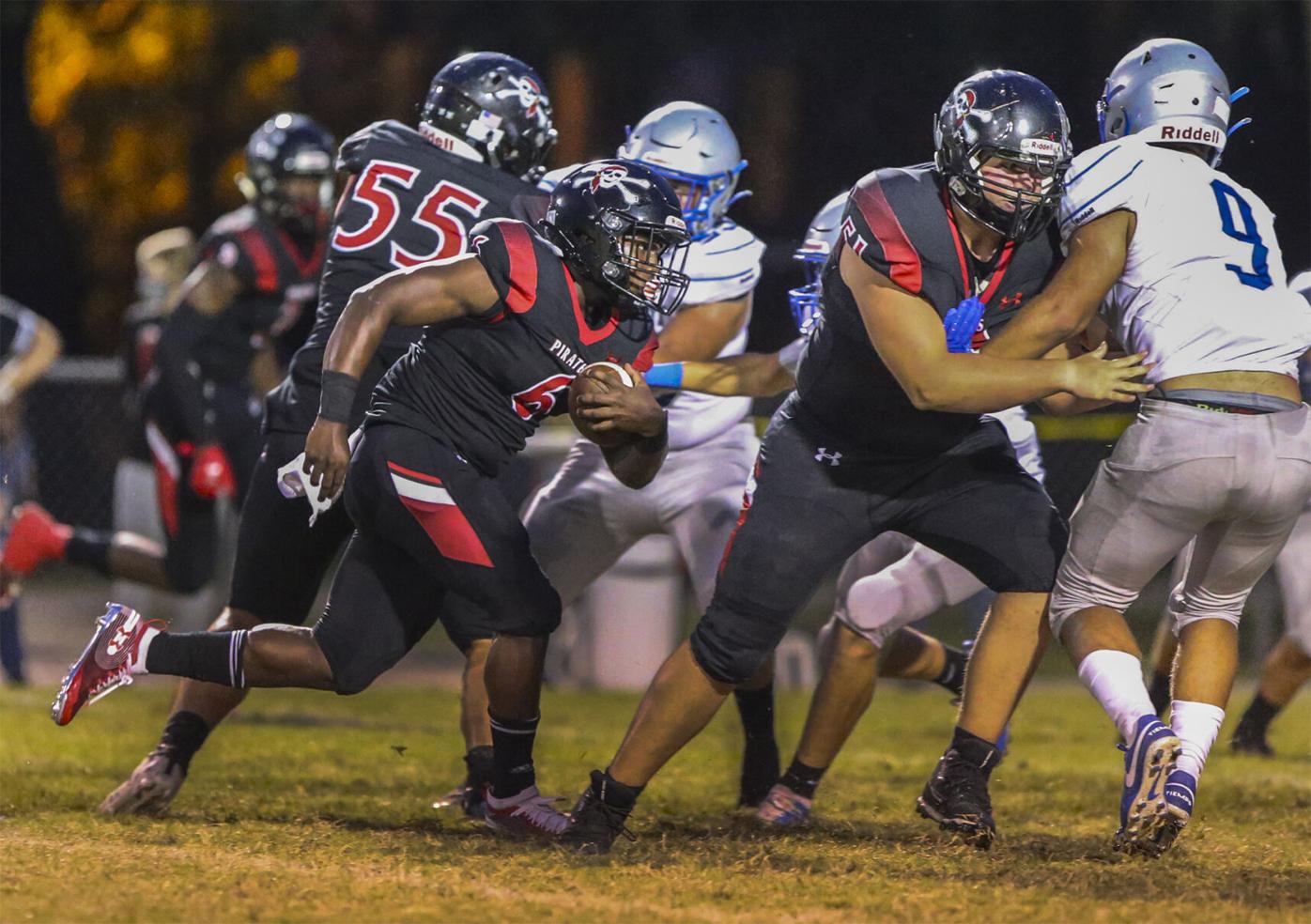 Port Charlotte running back Jakeemis Pelham (6) is one of a few newcomers that has the Pirates offense averaging over 50 points per game.

Dekwann Martin (99) leads the Port Charlotte Pirates to the field to face the DeSoto Bulldogs before last Friday’s blowout win. This week, the Pirates will be in for one of their toughest challenges of the season in the Palmetto Tigers.

Port Charlotte running back Jakeemis Pelham (6) is one of a few newcomers that has the Pirates offense averaging over 50 points per game.

Trailing Palmetto, 23-17, in the waning minutes of the regional semifinal, Port Charlotte and quarterback Logan Rogers had one last chance.

The Pirates had tried an onside kick after a late touchdown, but the kick went out of bounds. They forced a punt from the Tigers, but were left with just 35 seconds left to go for the win.

“We had a chance,” Pirates coach Jordan Ingman said. “We had the ball as time ran out. It ended in three Hail Mary’s. I would have loved to see what would have happened if we recovered that onside kick.

“It’s a game of inches. In my opinion, we were an onside kick away.”

The Pirates’ onslaught of scoring has been possible in large part due to a passing attack that features a pair of dynamic receivers in Solomon Luther (8 rec. for 174 yards and 3 TDs) and Alex Perry (7 rec. for 150 yards and 3 TDs).

When you add in two new running backs in Virgil Luther and Jakeemis Pelham along with Rogers, a third-year starter at quarterback, it’s a recipe for success.

“I think a lot of things are clicking for us,” Rogers said. “It helps when you have an O-line that’s giving you time to throw the ball, so salute to them. Our route running has been good, too, but it’s easy to score touchdowns against teams who aren’t fundamentally sound.

“We’ll see if we can do the same against Palmetto.”

“They’re still supposed to be loaded,” Ingman said. “When I talked to them at media day they said they think they have a chance to better than they were last year.

“We’ve done everything we can to try to remind them of how tough (Palmetto) is. It’s a challenge to duplicate what they’re walking into because we can’t simulate that speed they’re gonna see.”

The Indians lost, 43-19, in Week 1 to IMG Academy, but responded with a 40-6 beatdown of perennial 5A playoff team Raines (Jacksonville) last Friday.

Through two games, the Indians already have a new starting quarterback in Colin Blazek — a senior who recently transferred in from Illinois. So far he’s completed 25-of-48 passes for 379 yards and four touchdowns to one interception.

Not only has his success given the Indians a steady option under center, but it’s also freed up the coaching staff to find unique ways to use Steffan Johnson — the opening game starter at quarterback.

The Venice defense that held Raines to six points last week will have to show up again this week against an athletic Lyman team.

Though the 7A Greyhounds went 2-7 last year, they put up some impressive offensive numbers — scoring at least 28 points in over half of their games.

The Bobcats have had a rough start to the 2020 season, losing their first two games by a combined 64 points to Sarasota and Cardinal Mooney.

Last year, North Port led Lakewood Ranch late and put up 35 points on the Mustangs only to lose in overtime. However, the Bobcats have yet to display that kind of offensive firepower this year as they’ve yet to have a multi-touchdown game.

The Mustangs will open their season with this game.

The Pirates handled Charlotte in last year’s meeting despite going just 3-7 against the rest of its schedule in 2019.

It was a young group for Braden River last year, and if it returns quarterback Shawqi Itraish (2,525 passing yards, 18 TDs) and its rotation of three running backs who combined for nearly 1,200 yards and 14 TDs, it should be a formidable group to keep up with.

Charlotte, which was hardly tested in a Week 1 blowout of DeSoto, struggled to contain the running game of Sarasota quarterback Dom Bennett in a Week 2 comeback win.

However, it’s the first game of the year for Braden River and Charlotte could be hitting its stride.

The Mantas started slow in their first game against King’s Academy last week, falling behind, 19-6, at halftime.

However they were sparked by big plays of 63 and 92 yards in the second half to come within striking distance.

Though Lemon Bay was shut out against Oasis last year, quarterback Austin Andrle is healthy this time around and the team has added some playmakers around him to make the offense more potent.