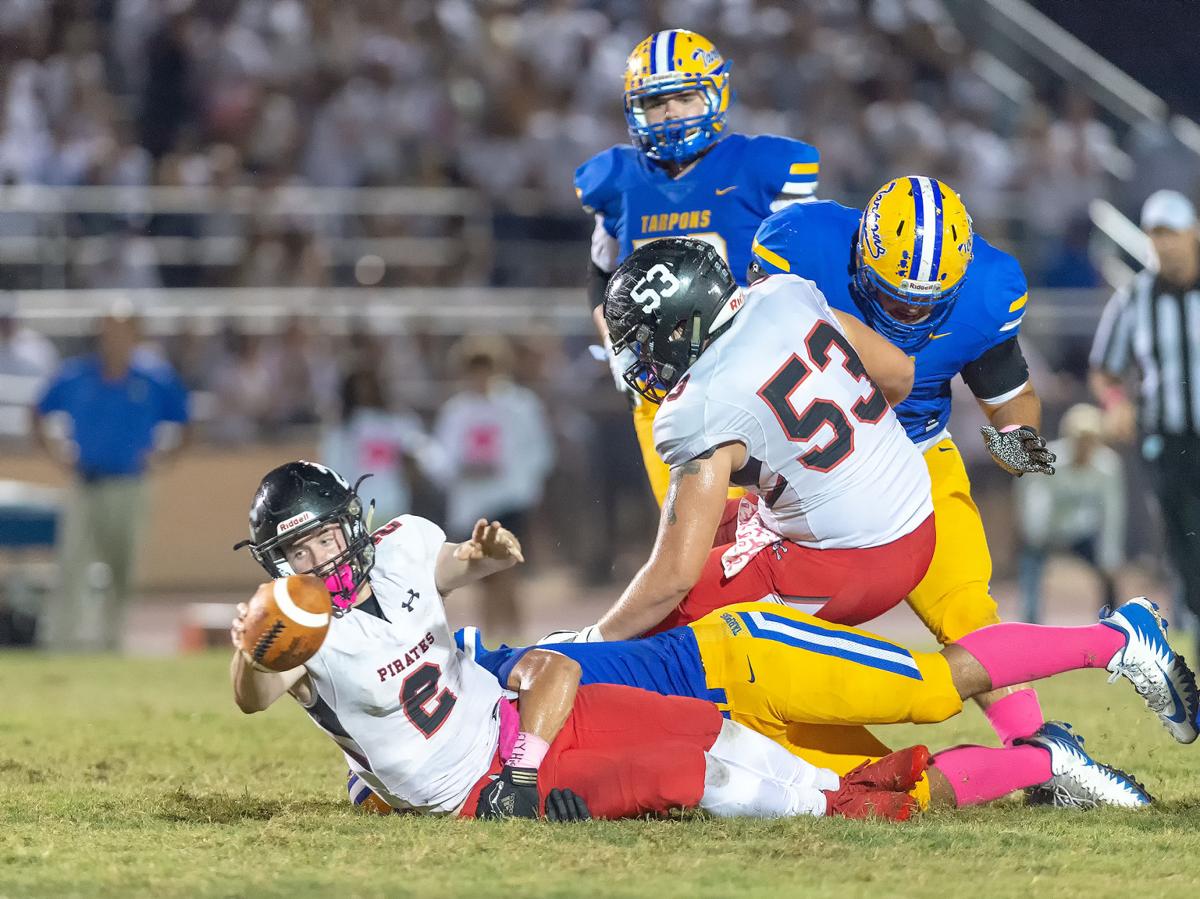 Port Charlotte’s Logan Rogers, left, stretches for the first down after getting a push from senior center Evan Smith against Charlotte. 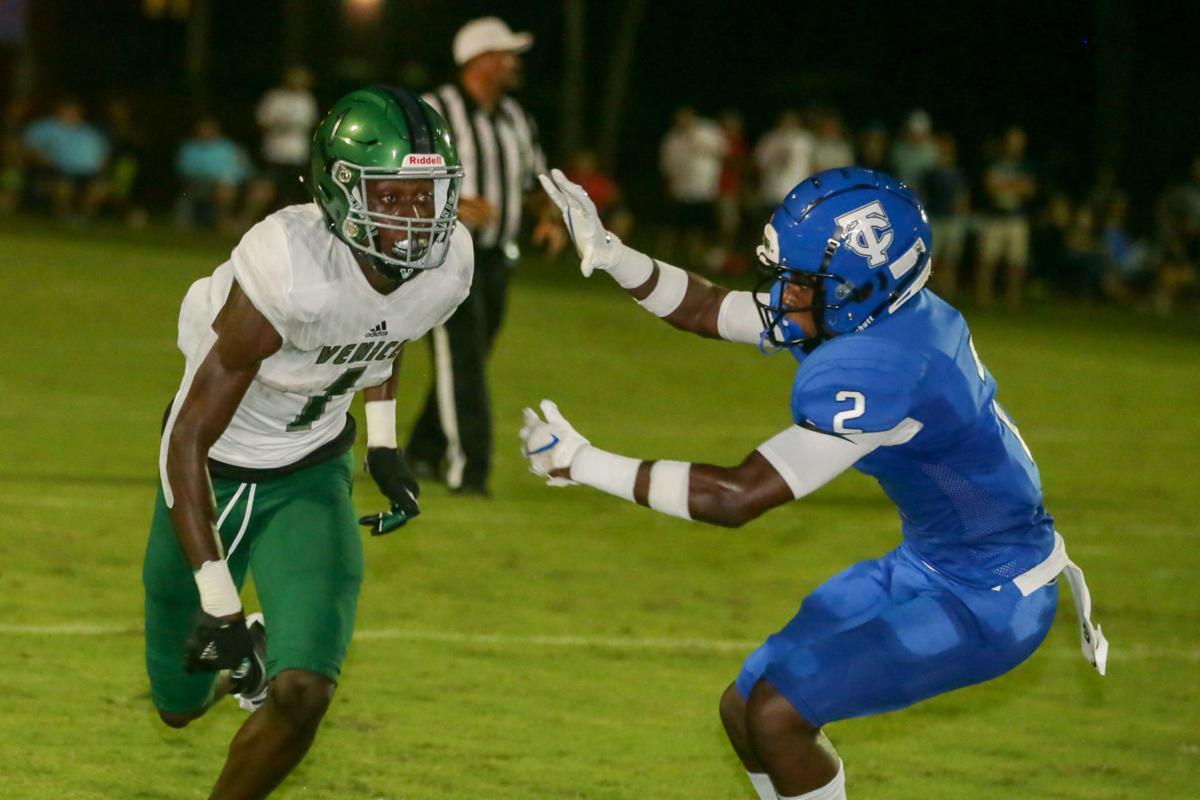 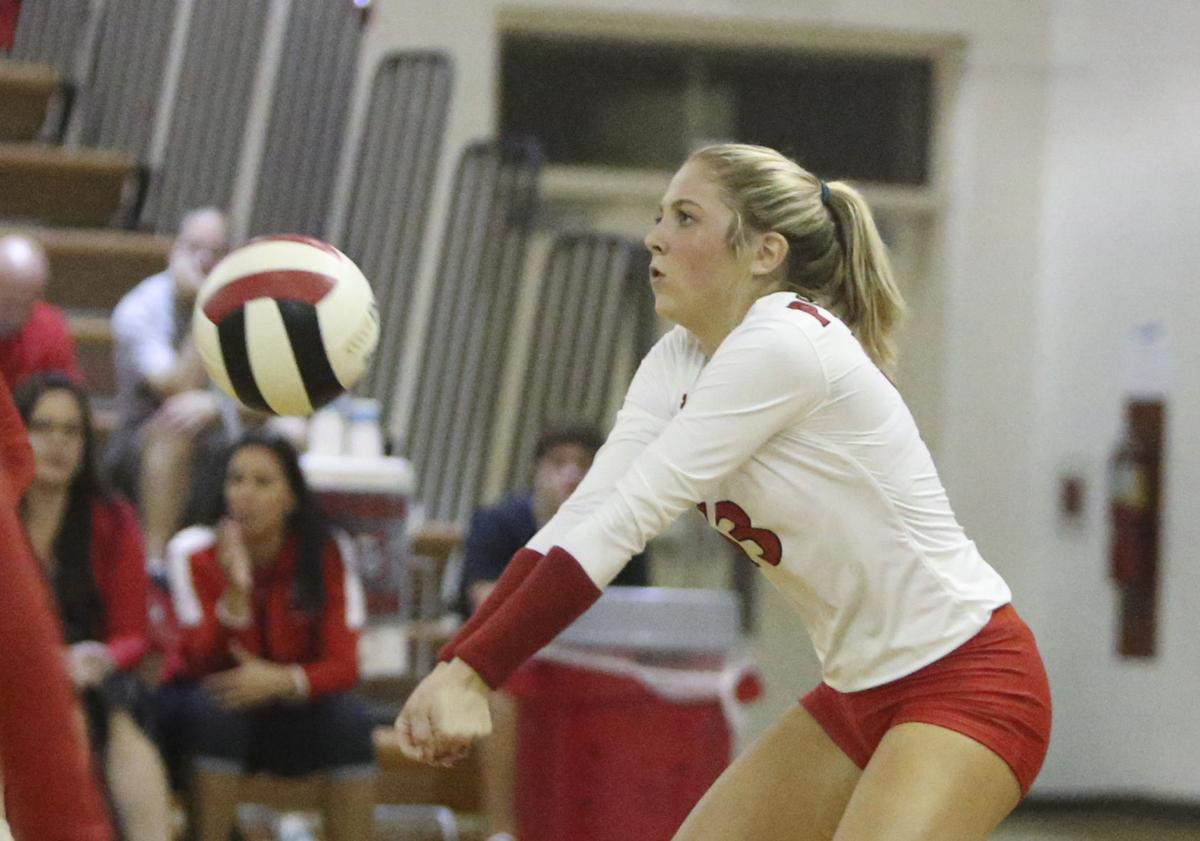 Port Charlotte’s Zoe Burkhart (13) became the second Pirate in the family to reach the Final Four. 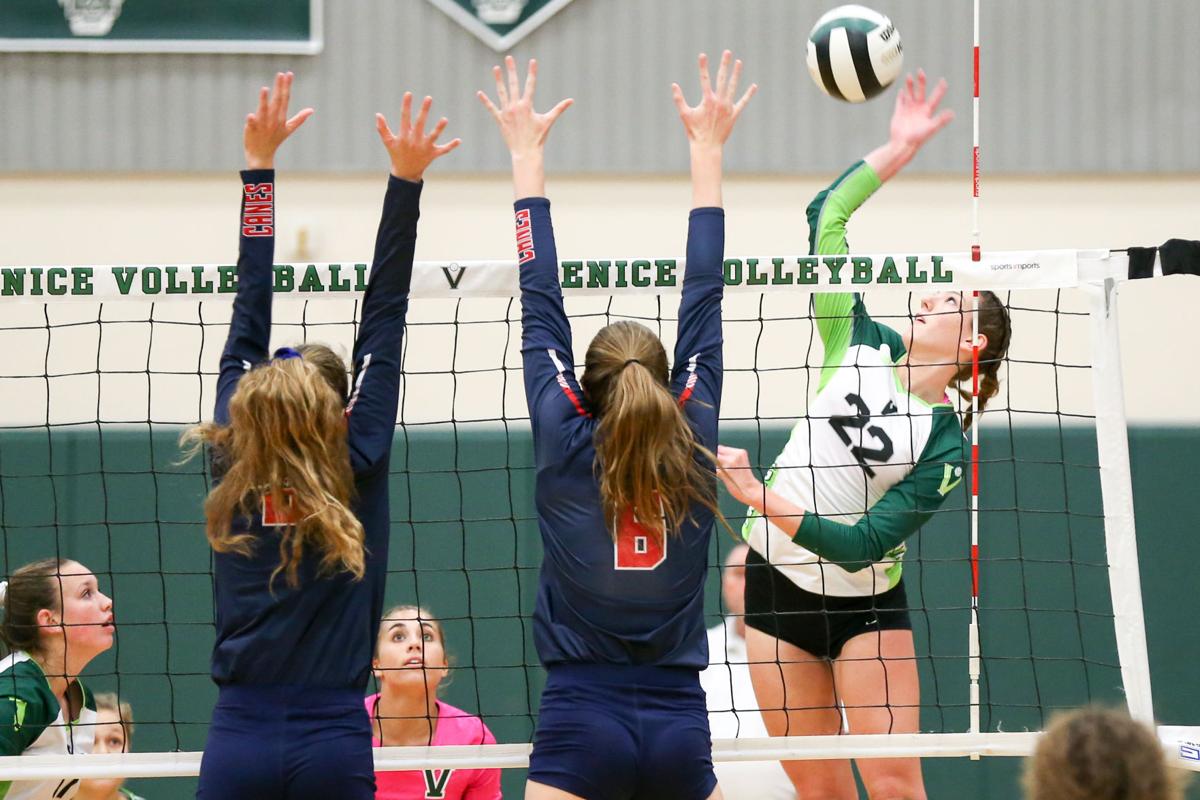 Senior outside hitter Sadie Kluner led Venice with 504 kills during her senior year. 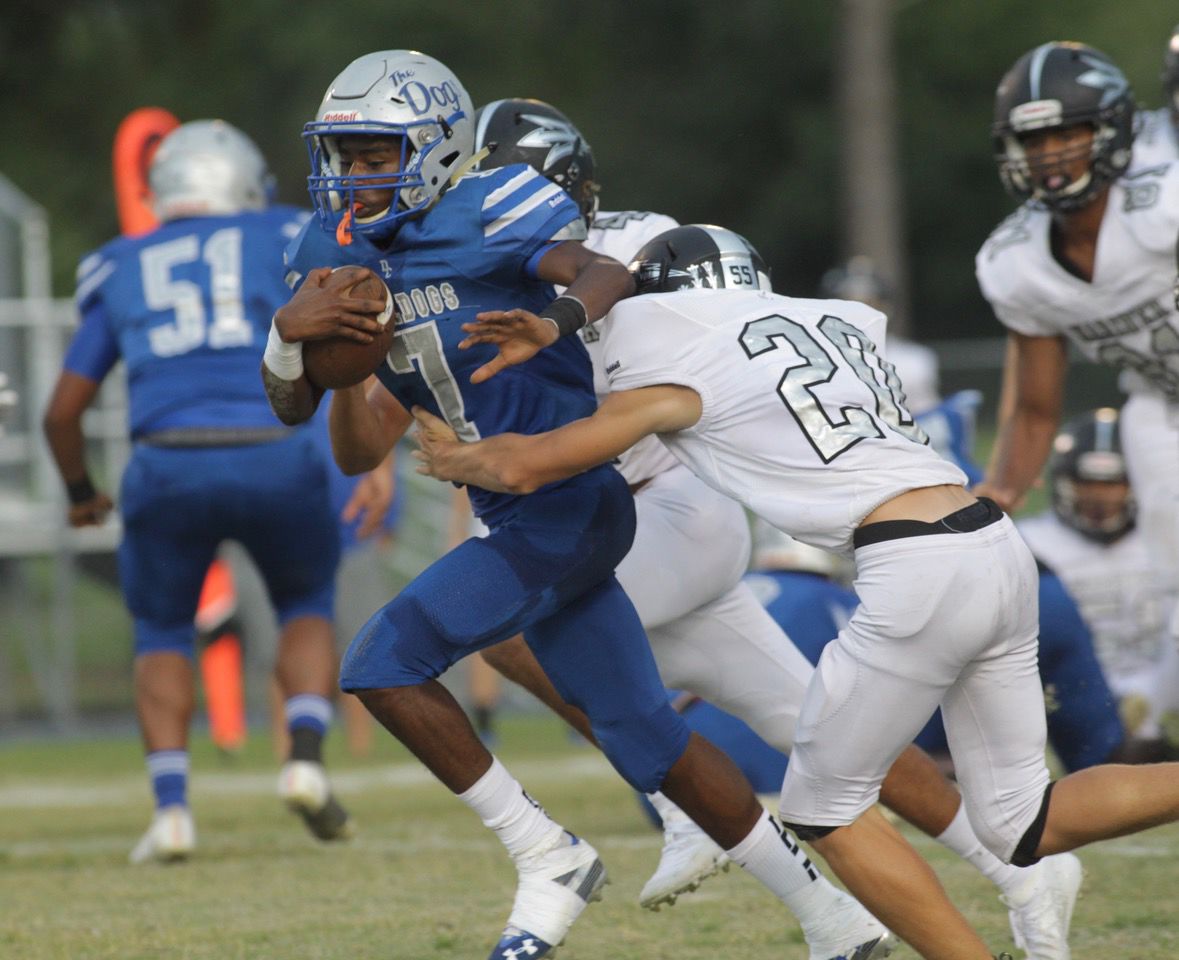 DeSoto County’s Yarzmen Wesley was a home run hitter for the Bulldogs as a senior. Against Cape Coral (not pictured), he had four carries for 118 yards.

Editor’s note: This is the first of a three-part series documenting some memorable sports moments from the Class of 2020. The series will continue with snapshots from the winter and spring seasons later this week. This is not a ranking, but simply some moments that stood out throughout the school year.

The memories made as a senior athlete are special, maybe more so than other years.

Maybe it’s that many athletes have risen to the top of the food chain by then or that there’s a greater sense of urgency knowing that it will all end soon.

Four of six area football teams reached the playoffs with a few thrillers along the way and a few athletes broke out with some impressive individual accomplishments.

So take a look back on the Class of 2020 one last time and enjoy the excitement they brought to our area with some of their best moments of the fall:

On the Port Charlotte football check list there are two main goals: 1. Make the playoffs and 2. Beat the Tarpons.

The Pirates accomplished both, finishing the year 10-2 with both losses to top-ranked Palmetto, edging out Charlotte 24-20 in a second-half thriller.

Steffan McGowan got things cooking in the first half with an early interception with the Pirates up 7-0, but the Tarpons regained the lead.

Down 20-17, the Pirates needed a few QB sneaks to get the edge. Getting the push up front was senior center Evan Smith, who drove the pile back for quarterback Logan Rogers to fall forward for the game-winning touchdown and the game-sealing third-down conversion.

“We just had to get low when we ran the sneaks,” Smith said. “I have 100 percent confidence that (Rogers) is scoring when we run it. It was our mission this year to end it with a bang.”

Kluner gets Venice past Fort Myers

There was no player more dominant on the volleyball court this season than Venice senior Sadie Kluner. A Player of the Year finalist, her 504 kills this year speak for themselves.

But one of her shining moments was a 28-kill performance against Fort Myers in the regional final.

Tied 2-2 going into the final set, Kluner took over. She had four early kills to give Venice a 9-4 lead and then helped close out the victory. The win sent the Lady Indians to their 8th Final Four this decade.

“This was awesome tonight and what a fun environment. It was one for the ages.”

A record breaking year in the water

Port Charlotte’s Oscar Marquardt did a bit of everything in the pool this year and made a little bit more history before the season was over. He holds plenty of records and broke a few more as a senior.

At North Port, Michael Sickels was also making waves. Sickels finished seventh at states in the 100 Backstroke and broke a school record in the process with a 51.6 second finish.

The Charlotte football team had struggled for much of the game, but a few seniors helped spark a late surge that sealed a 45-42 quadruple overtime win over Lake Gibson to reach the regional final.

Trailing by 8 late in the fourth quarter, two-way senior Malakai Menzer scored on a short run and then caught a swing pass for the game-tying 2-point conversion to send it to OT.

Once there, Jeremiah Harvey caught a slant for a touchdown to keep the Tarpons alive before senior long snapper Jake Sheets sent the ball back toward sophomore Tyler Amaral for the game-winning kick.

“That was incredible,” Charlotte coach Binky Waldrop said after the game. “Our kids just kept fighting. I knew coming in that we would have to play a really good game tonight. The kids kept believing. There was a couple times in a game that they could’ve given up and they kept fighting.”

Port Charlotte senior Ben Goldman needed to be 3-over par or better over his final three holes for the Pirates to have a shot at states for the second-consecutive year.

After bogeying the 16th and 17th holes, he sank a 6-foot putt for another bogey — forcing a playoff with Estero that the Pirates won to finish in third place, advancing to the state tournament.

In the playoff, Goldman stepped up again — sticking his approach shot within a few feet and draining his putt for birdie — scoring the only birdie by either team in the playoff to give his team all the cushion it needed.

After losing their quarterback and a 14-point halftime lead, Venice trailed Florida powerhouse Trinity Christian in double overtime. On fourth down with the game on the line, senior Ryan Overstreet lobbed up a fade to fellow senior Malachi Wideman in the corner of the end zone.

As he did all season, Wideman leapt for the ball and came down with the touchdown to cut the deficit to a point. Then, the Indians ran senior Brian Taylor on a draw up the middle for the game-winning two-point conversion.

The Burkharts make it back to the Final Four

The Port Charlotte volleyball team hadn’t reached the Final Four since current head coach Christine Burkhart was a sophomore. That made the Lady Pirates’ 2019 playoff run even more special as Burkhart’s daughter, Zoe, was now leading the surge.

Port Charlotte faced a difficult schedule, which helped prepare them for the postseason. They won their second straight district title and beat Osceola in the regional final to advance to the state semis. Burkhart led the team with 318 digs as a senior.

“At the end of the day, we broke a streak of not getting into the final four since 1988,” coach Burkhart said. “If you look at it as a whole, these girls made their mark on Pirate volleyball. Our girls came back and fought that entire time, that’s just the character of the girls and who they are.”

Wesley goes off on Cape Coral

Speedy DeSoto County running back Yarzmen Wesley made good use of his limited carries in a midseason game against Cape Coral.

After not playing in the first half, Wesley took four carries for 118 yards and two touchdowns in the Bulldogs’ 43-14 rout of the Seahawks. His first carry of the game went for 56 yards.

“I already knew once it was time for me to get in, it was time the show gets started,” Wesley said. “I just had the mind set every time the ball touched my hands it’s either make something special happen or get to the end zone the best way I can.”