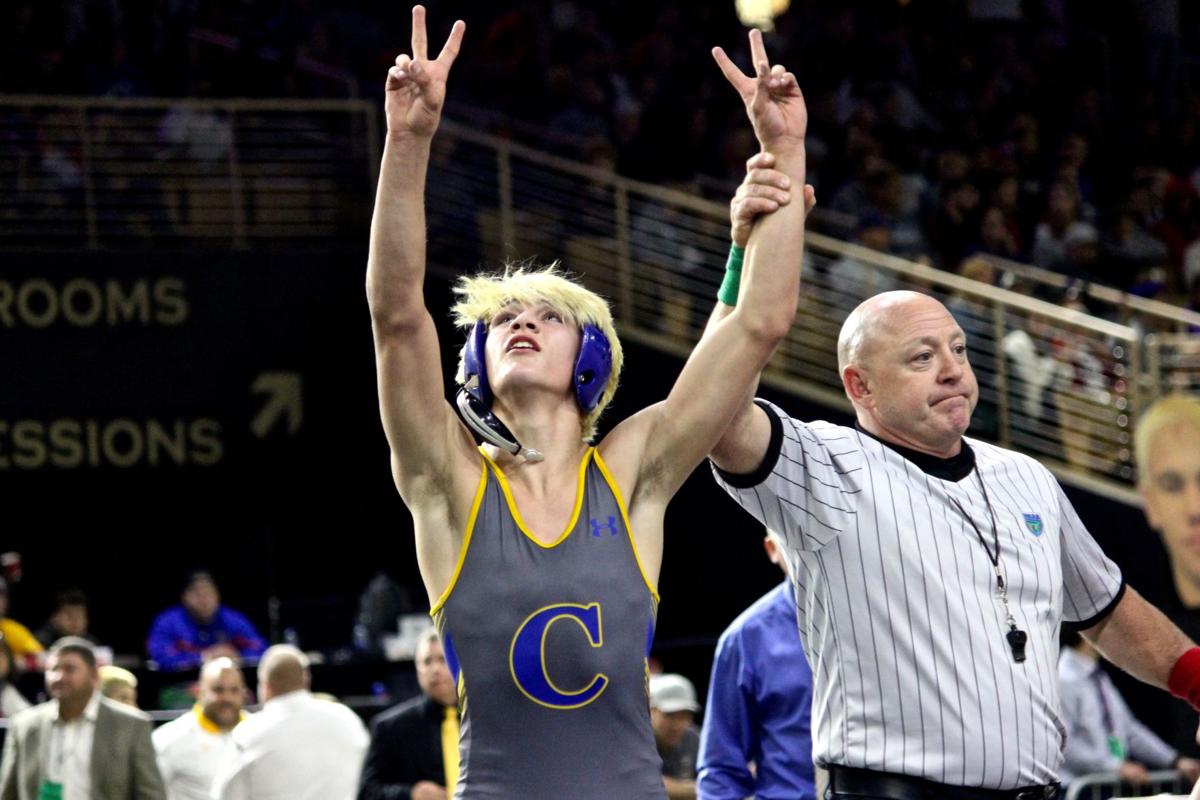 Charlotte wrestler Donovan Cataldi finished his career as the only four-time region champ at the school and added two state titles. 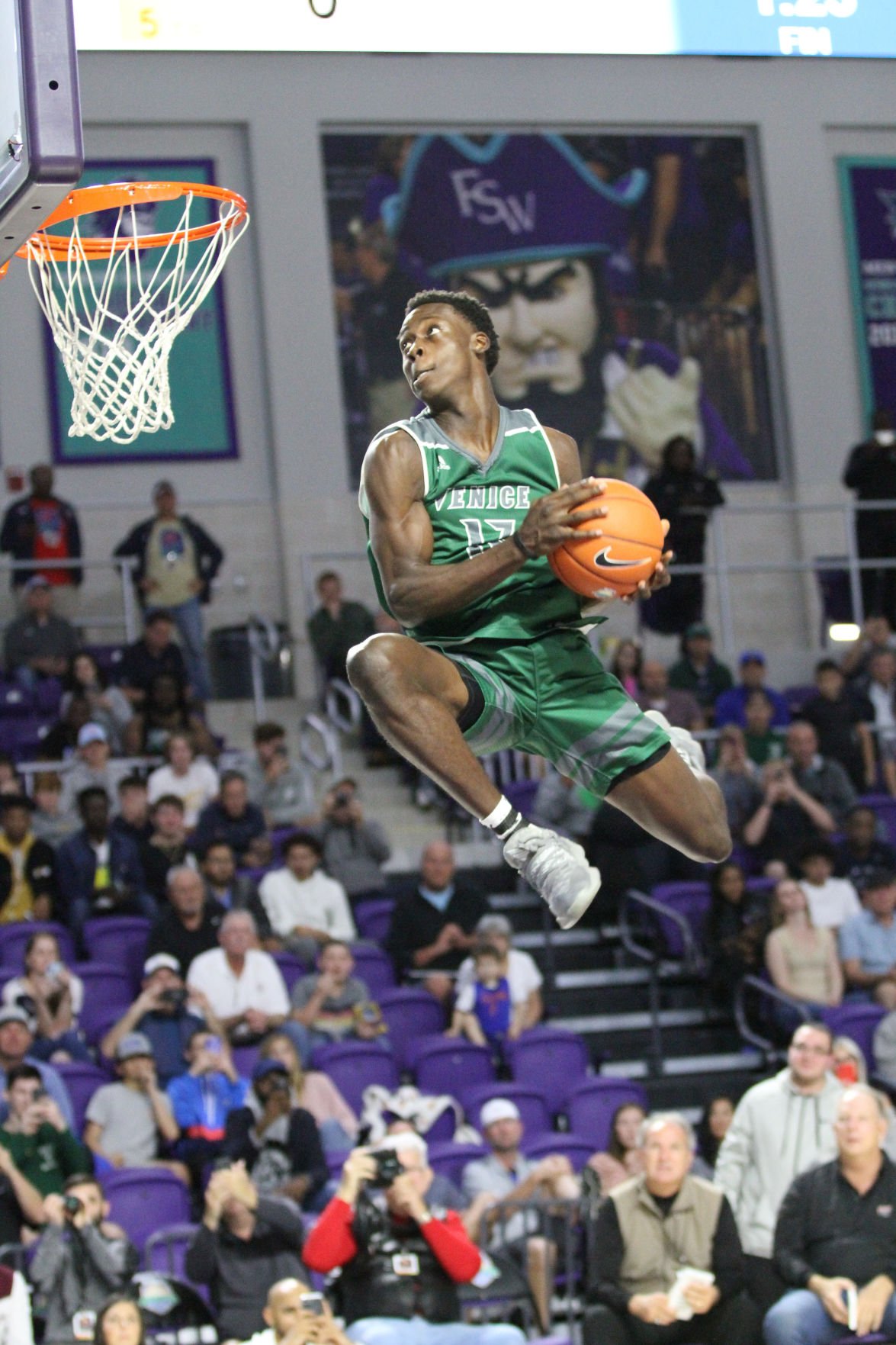 Malachi Wideman threw down five perfect-score dunks as he won December’s City of Palms dunk contest in a tiebreaker. 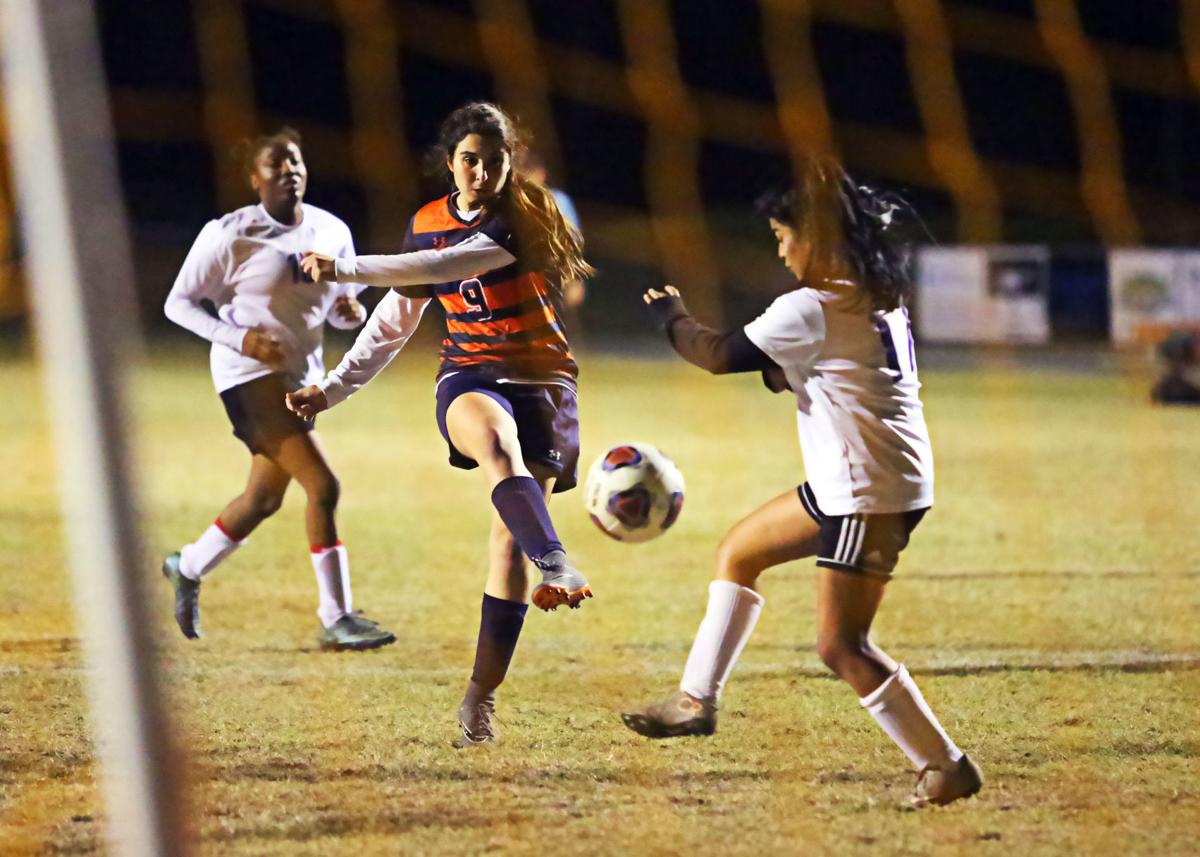 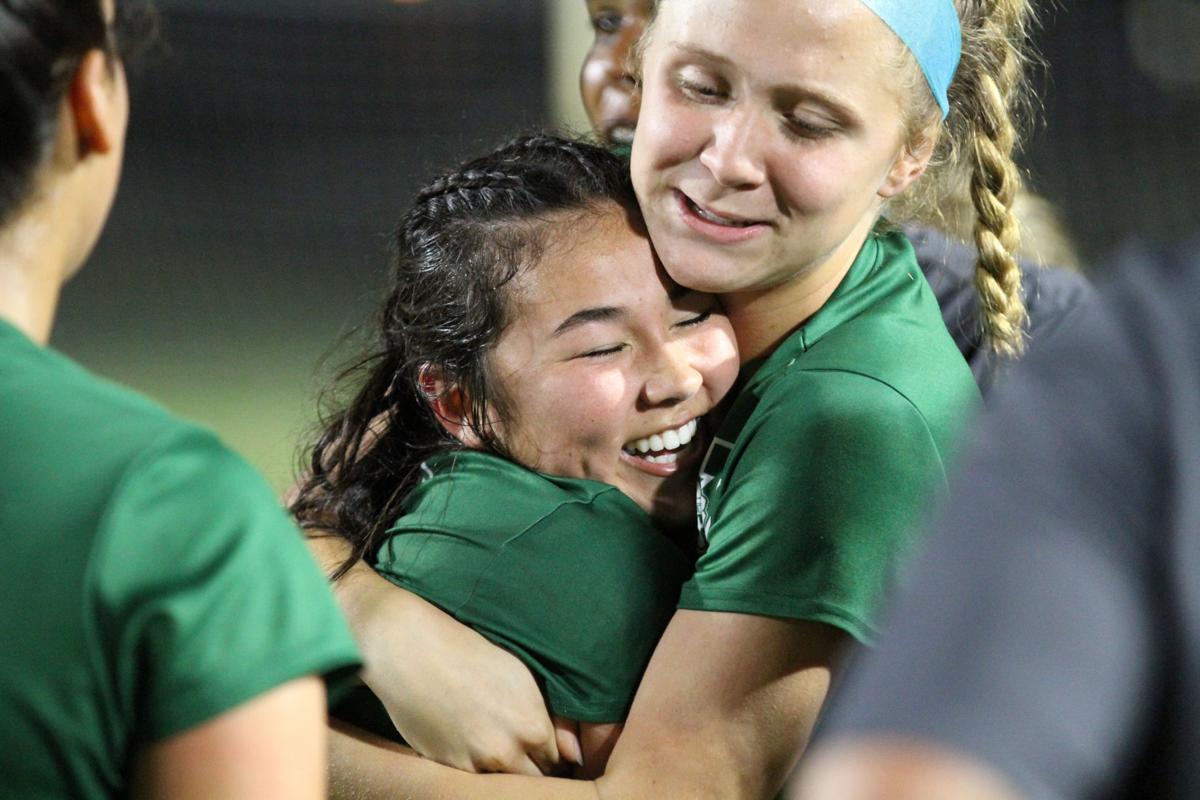 Mason Schilling basks in the moment as she’s hugged by teammate Kaya Bartlett after scoring the game-winning goal in the regional championship. 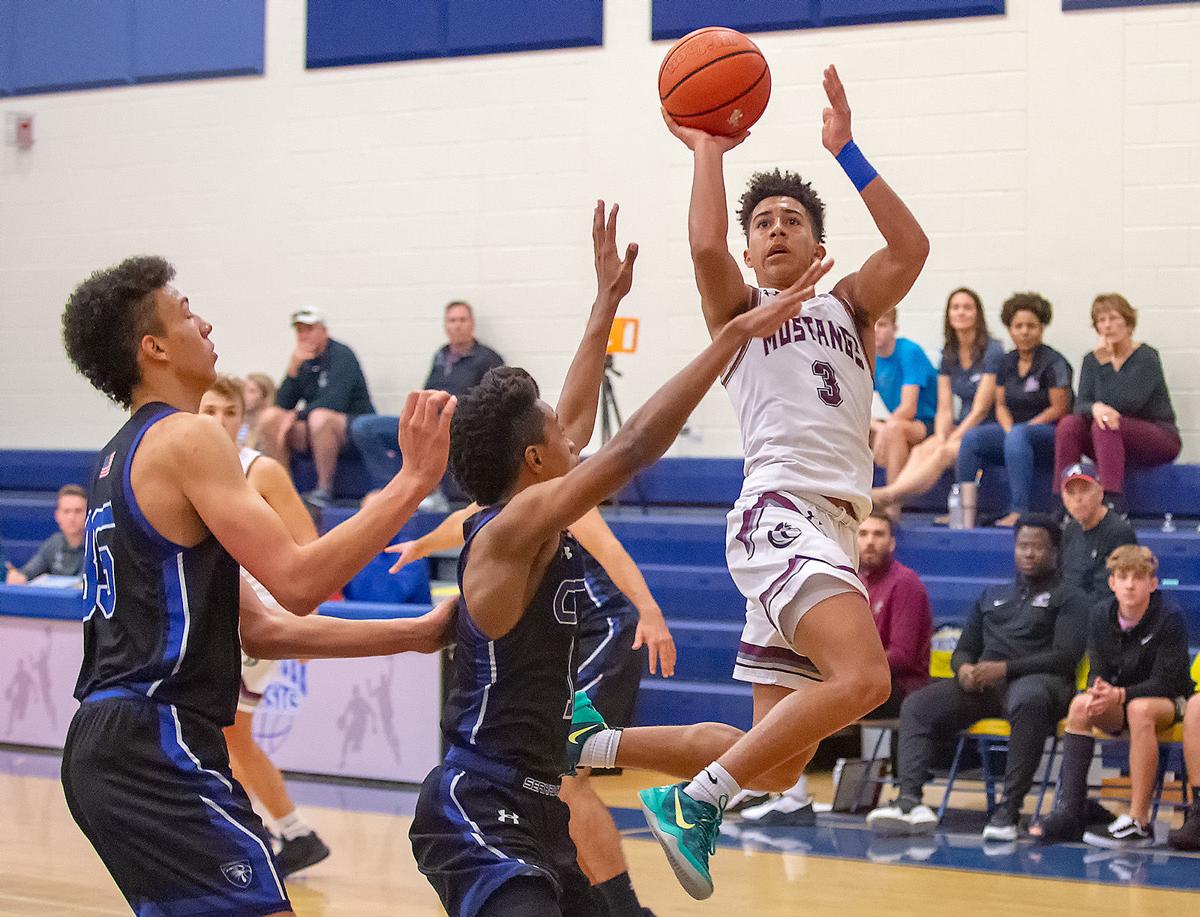 Charlotte wrestler Donovan Cataldi finished his career as the only four-time region champ at the school and added two state titles.

Malachi Wideman threw down five perfect-score dunks as he won December’s City of Palms dunk contest in a tiebreaker.

Mason Schilling basks in the moment as she’s hugged by teammate Kaya Bartlett after scoring the game-winning goal in the regional championship.

Editor’s note: This is the second of a three-part series documenting some memorable sports moments from the Class of 2020. The series will continue with snapshots from the spring season later this week. This is not a ranking, but simply some moments that stood out throughout the school year.

It's hard to say without being able to complete the spring seasons, but the winter months seemed to be the most fruitful for area teams.

Quite a few months for these athletes. For many, these were the final months of their athletic careers. Though some will carry on into college sports, others only have these memories to reflect on.

So take a look back on the Class of 2020 one last time and enjoy the excitement they brought to our area with some of their best moments of the winter:

Charlotte wrestler Donovan Cataldi has been one of the most consistent wrestlers throughout his four-year career.

He finished as the first four-time regional champ in school history and won his second state title this year. Despite battling a shoulder injury, he finished the year 40-3 and exited high school on top of the podium.

"Had a concussion, came back and have only had three takedowns since then," Cataldi said at states. "I have way too much energy when I'm out there and I hate to sit on top so I'm just going, going, going. To win a state title in my last high school match ever, there's nothing better than that."

Malachi Wideman, a two-sport athlete for Venice, has always been known for his leaping ability. That was true long before he transferred to Venice, showing off his slick dunks for LeBron James and company as a junior.

So he was always a favorite in the City of Palms dunk contest each December. He placed second as a sophomore and junior, but was able to get over the hump this year.

A windmill over fellow 6-foot-5 teammate and FSU commit Thomas Shrader and a front-flip over the row of judges made it tough to withhold the trophy this year.

The 6-foot-5 senior needed every last point from the judges as he scored a 57/60 and a 60/60 in the finals against Samson Ruzhentsev to force a one-dunk tiebreaker — winning on a 360 one-handed slam.

“I knew that I had at least one or two dunks that I could always run back to,” said Wideman of what he was thinking halfway through the final round. “That’s what I planned for if I didn’t land the first ones. I tried to land some big ones early. But if I couldn’t land any big ones, I had some that I could for-sure get.”

No record can withstand Emani Jefferson

Emani Jefferson became one of the top girls basketball players to pass through the area while at North Port. As a junior, Jefferson broke the single-game scoring record twice in a two-week span and became a 1,000-point scorer by year's end.

This past season, Jefferson continued to achieve career milestones.

Jefferson not only became the program’s first-ever Division-I commit by signing with Wright State this winter, but she also broke the school record for most points in a career (1,819). She also broke the long-jump record in the spring.

“Emani Jefferson is the best player in Southwest Florida,” North Port coach Dale Huffman said. “She is our MVP, the heart and soul of our team. How Emani goes is how we go.

“She rewrote our record books and is the best player to ever come out of North Port High School.”

Fw teams could slow down the Lemon Bay and Venice girls soccer teams as they each finished as district and regional champions.

Lemon Bay won its first district title since 2007 led by junior Lauren Ragazzone as well as Zoe Melo and Hanna Cislo, a senior duo that combined for 56 goals this year during a 21-3 Final Four run.

Triple-doubles are hard to attain for high school players unless they are just above and away the best player on the floor each night.

Well, Community Christian's Ethan Bray did it three times during his senior year and was a stat or two away from a few more. He became the first player in program history to earn one.

He averaged 16 points, 7 assists, 6 rebounds and 2 steals and was a lockdown defender for the Mustangs.

"Ethan took his game to another level his senior season," Mustangs coach Kurt Taylor said. "He was one of the best all-around players and clearly the best point guard in the area this season. He was our leader on and off the court."

It was Charlotte lifter Annabelle Anderson-Prater’s clean and jerk that helped her claim the 129-pound state title this year. Combined with a 170-pound bench press, her 185-pound lift in the clean and jerk gave her a total of 355 pounds and a first-place finish by 10 pounds.

Joining her from the area and making history were Port Charlotte's Ameijha Jones and Charlotte's Madison Shepard.

Jones was a district and regional champion and finished eighth at states while breaking the school record for total lift (340 pounds) and breaking the long-held record in the clean and jerk with a 175-pound lift.

Shepard was also a district and regional champion, finishing fifth at states. She set a state record with a 170-pound bench in the 110-pound weight class.

Seniors drive Imagine further than ever

Led by a trio of college-bound seniors, the Imagine School girls basketball team won the first playoff game of any team sport in school history, and then went on a run all the way to the regional championship.

Senior Katie Klein, a 1,000-point scorer for the Lady Sharks, along with Skyelar Woods and Arianna Andrade helped Imagine to two upsets in the regional tournament before they met their match in the finals.

For whatever reason, the area soccer scene was a high-scoring affair during the 2019-20 season. That included two seniors that broke school records.

North Port striker Aleena Purvis broke the single-season goal (33) and points (64) records, as well as both career marks for the school. Her teammate, keeper Jordan Wyatt, broke three school records with the most saves in a season (218), most saves in a career (500+) and most shutouts.