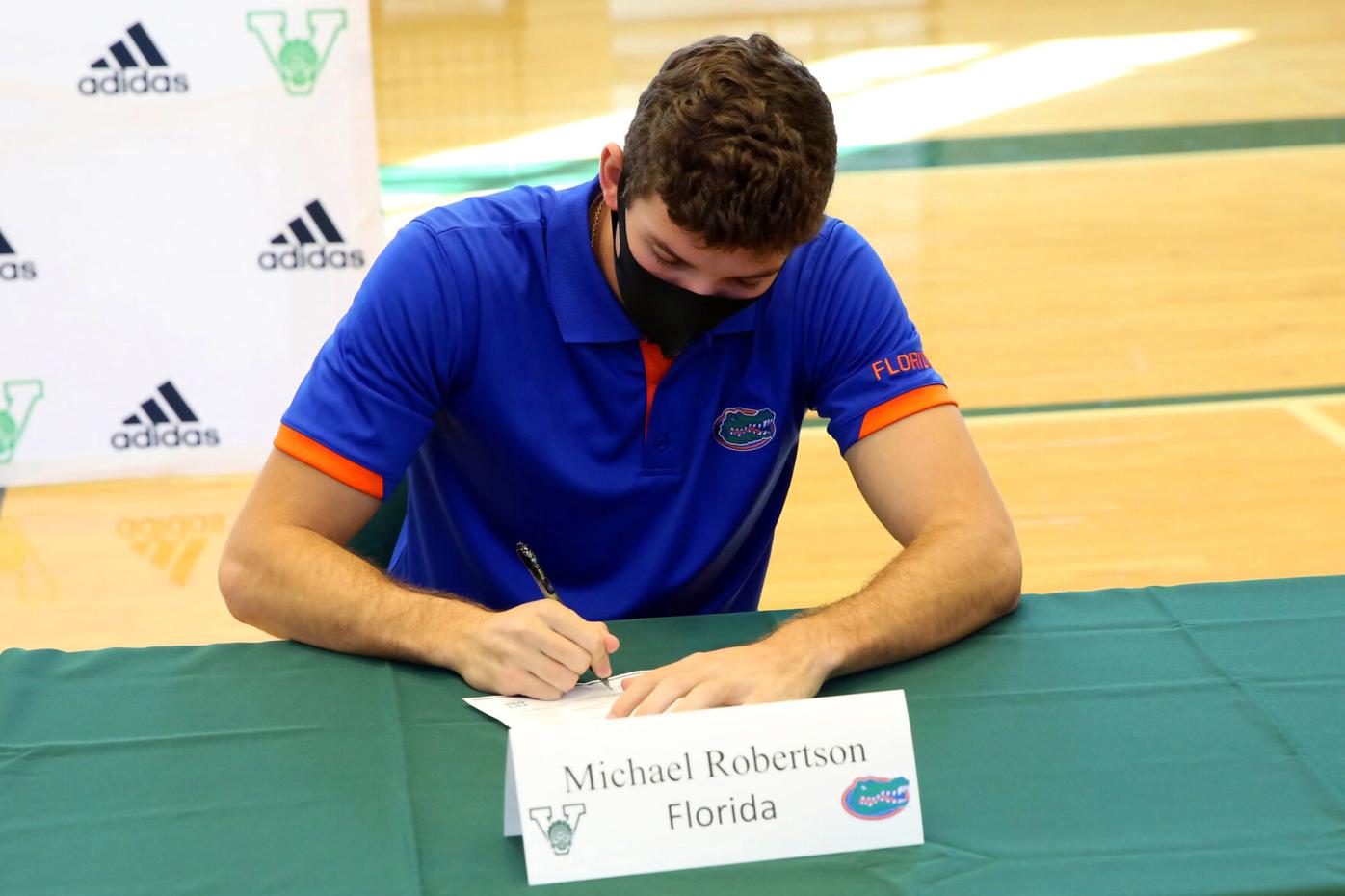 Michael Robertson has been committed to play baseball for Florida for over two years. He finally got to make that commitment official this week. 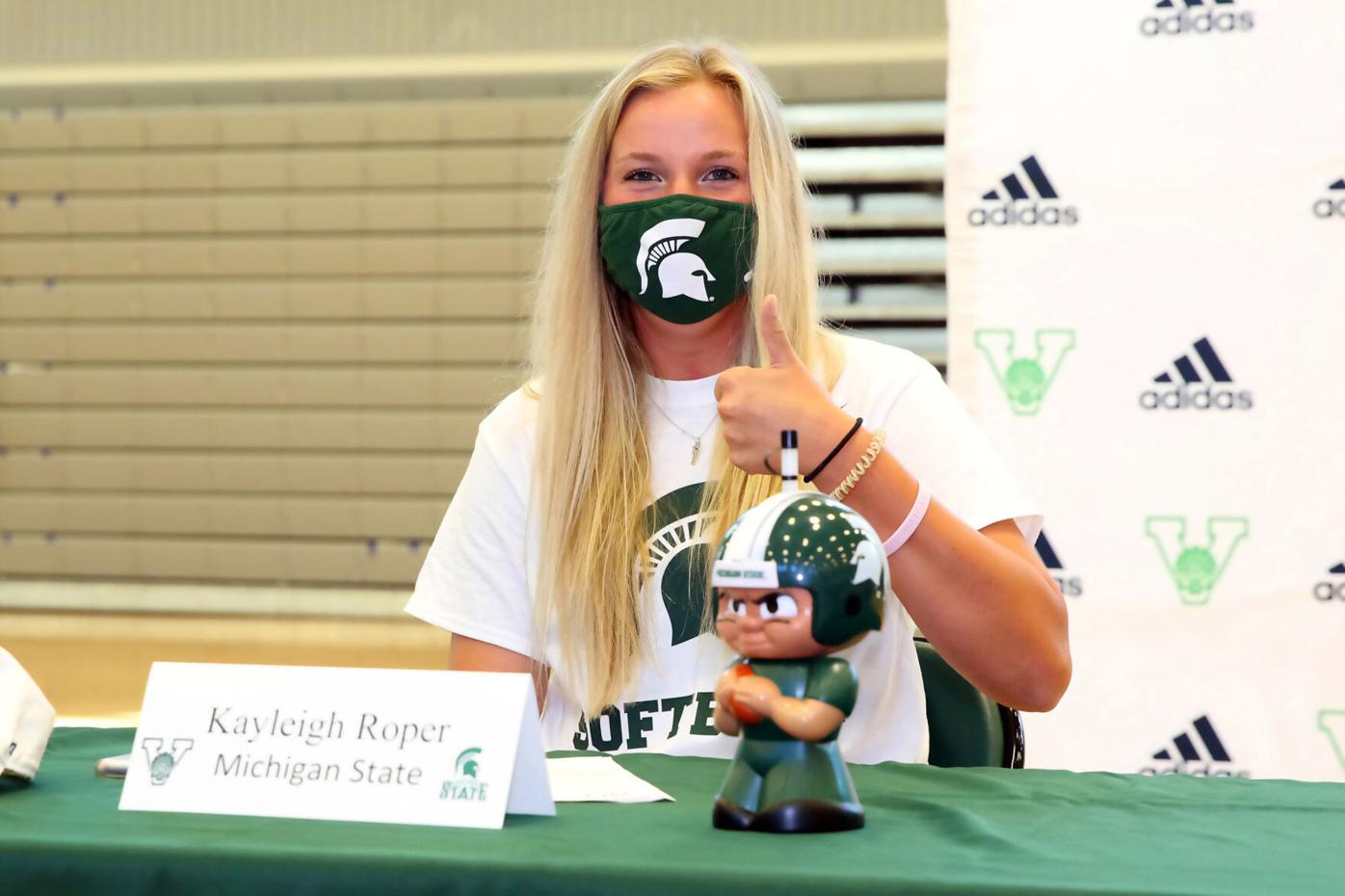 Venice High softball star Kayleigh Roper will continue to wear green and white in college when she competes for the Spartans.

Michael Robertson has been committed to play baseball for Florida for over two years. He finally got to make that commitment official this week.

Venice High softball star Kayleigh Roper will continue to wear green and white in college when she competes for the Spartans.

While many high school athletes hoping to be recruited might have been sent into a panic by the coronavirus pandemic earlier this year, Venice High baseball player Michael Robertson had little reason to worry.

He’s been committed to play for the Gators since his sophomore year, and he’s given them plenty of reason to honor that ever since.

Robertson and four other Indians athletes made their college commitments official Tuesday afternoon during an Early National Signing Day ceremony at the Venice High gym.

“It was super special,” Robertson said. “It’s great being committed, but when it’s official it’s kind of like, ‘Whoa, this is really happening.’ It’s a special day for everybody up there including myself.

“I’ve been cheering for the Gators my whole life. My mom went there. So when that opportunity arose, I jumped on that. It’s definitely my dream school.”

Growing up with three older siblings and a mother who all attended Venice High, Robertson was often around Indians athletics as a kid. When his father, Indians tennis coach Wayne Robertson, introduced him to baseball in the backyard, it stuck.

He played in Venice Little League, with the Florida Burn travel league and eventually, it was his turn to don the green and white.

Back then in 2017, Robertson was a tall and skinny freshman who had yet to fill out his now 6-foot-1, 170-pound frame. Even still, the Venice coaching staff offered him a varsity spot.

“There’s only been a few players who have done that,” Indians coach Craig Faulkner said of Robertson making varsity as a freshman. “They’ve all been really good players and he’s definitely one those.

“He was so weak when he first came out. He was just a young kid, but he was so talented, we decided we’d take a chance on him and put him on varsity and man did it pay off.”

Robertson would go on to help the Indians win back-to-back state championships as their center fielder and leadoff hitter. He hit a team-high .441 across 32 games in his sophomore season, scoring 27 runs, knocking in 19 and stealing 18 bases.

Robertson never had a chance to play for a third straight state championship as the coronavirus pandemic brought about a premature end to his junior season.

“When it got to late May, early June I was thinking, ‘Dang, this is when I’d be playing for a state championship.’”

Robertson could still have a chance to play for one more state title this spring barring any coronavirus-related cancellations. But even if he doesn’t win another ring, Robertson has secured himself more opportunities to win at the next level, and maybe even beyond that.

“There’s a lot of things that make Mike stand out,” Faulkner said. “Number one, his character and how he handles himself is off the charts. He’s a leader.

“Baseball-wise, his speed is Major League speed. That’s what excites everyone about him is how fast he is and how tall and lanky he is. He has a really strong arm. Professional scouts really like how he carries himself and how he plays the game. He has a lot of tools that everyone is looking for.”

Here’s a look at the other athletes:

Connor O’Sullivan (Stetson): A transfer from Cardinal Mooney, O’Sullivan earned the starting job at second base and was off to a hot start for the Indians last year — hitting .458 over eight games before the season was canceled.

Kayleigh Roper (Michigan State): A four-year starter for the Indians, Roper has been a mainstay in the heart of the Venice lineup. Last year she hit .424 with 14 RBIs in 10 games.

Becka Mellor (Barry): Another four-year starter for Venice, Mellor pitched and played first base and the outfield for Venice.

Halle Moore (Bryant): A four-time district champion with the Venice girls swim team, Moore competed as part of the Girls 200 free relay in the state meet this year.