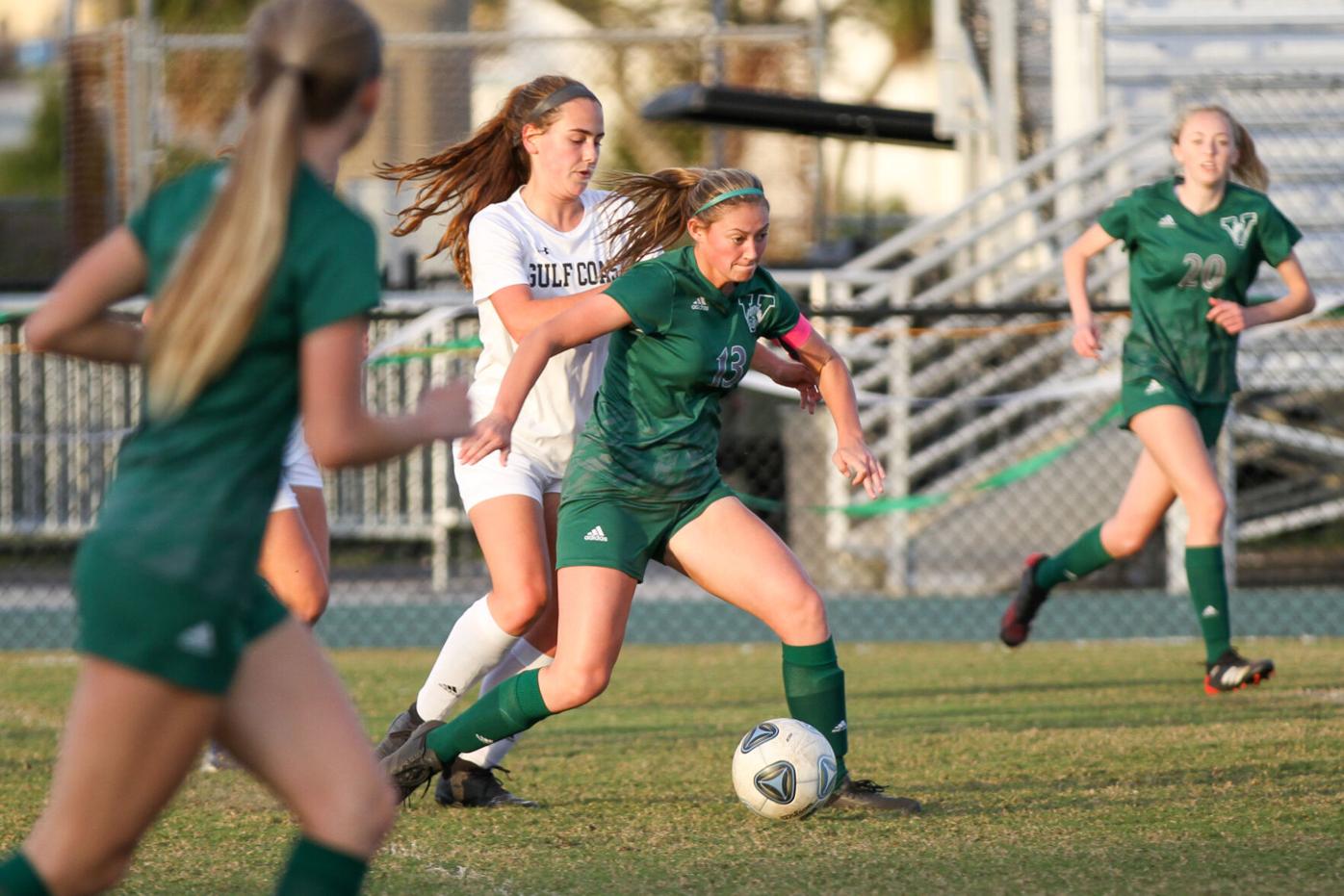 Kiki Slattery has scored 17 goals and recorded nine assists through 10 games as Venice is ranked No. 51 in Florida. 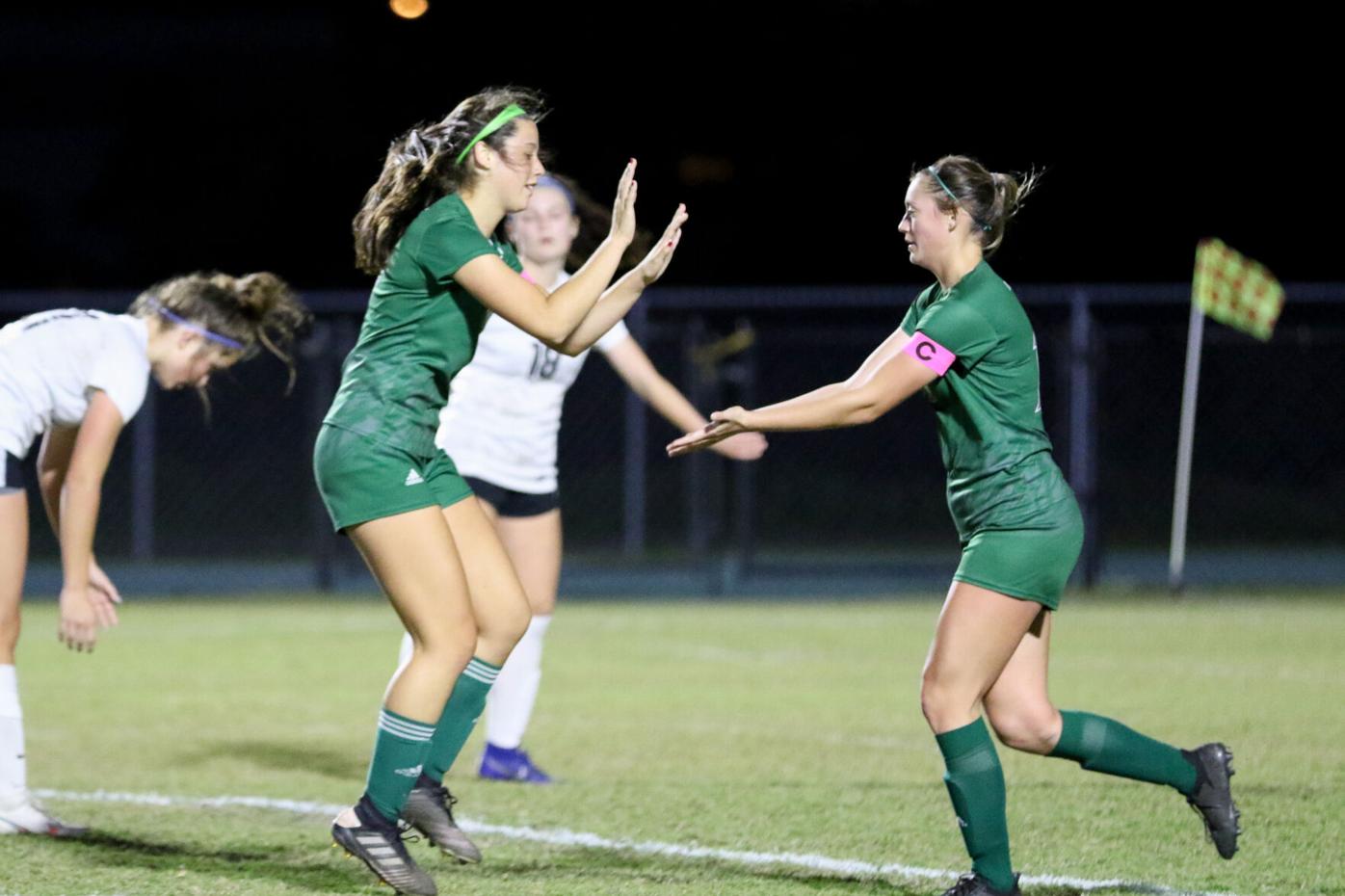 Venice midfielder Rachel Dalton (left) congratulates Kiki Slattery after scoring one of her 17 goals this year.

Kiki Slattery has scored 17 goals and recorded nine assists through 10 games as Venice is ranked No. 51 in Florida.

Venice midfielder Rachel Dalton (left) congratulates Kiki Slattery after scoring one of her 17 goals this year.

No one would have faulted Kiersten “Kiki” Slattery for feeling the pressure this year.

It may be nearly impossible to replace that duo, but Slattery isn’t fazed by the expectations.

“I feel like I’ve had less pressure, honestly,” said the senior forward, who has scored 17 goals in 10 games for Venice. “They were awesome and great assets to our team. I wouldn’t even call it pressure. I just feel like I’ve gotten the role to step up, and I’ve done it.

The four-year starter has been preparing for this pretty much as far back as she can remember. An avid soccer player and fan since she was 4 — her favorite team is the Tottenham Hotspurs — the Lady Indians senior forward has dreamed of playing at the next level for years now.

“She pushes me to get out to the field,” said Kiki’s father, Chris Slattery. “Even as a little kid she always wanted to go.

“When I coached U9 and U10, she was there an hour early and there an hour late. Even now on days off, she’s pushing me to go to the field. ‘Dad, can you go stand in goal? Can you come over and return balls for me?’ She’s always trying to get better. Constantly.”

The persistence has already started to pay off for Slattery.

Along with being named a team captain, she also carries a weighted 4.6 GPA and signed her National Letter of Intent to play D-I soccer for the University of North Florida, where she plans on pursuing a degree in the biomedical field.

“Kiki has a burning desire to be the best that she can be and that shows every time she steps on the field,” North Florida coach Eric Faulconer said in a press release. “She is willing to do the little things that makes a player successful. She is very quick, willing to track down every ball and most importantly, she produces goal-scoring opportunities.

“I am certain she is going to make a huge impact on our team and she will fit in well in our overall attacking philosophy.”

The work Slattery puts in is hard for teammates to ignore.

“Her life revolves around soccer,” senior goalkeeper Ashton Pennell said. “She’ll be at practice and she’ll be like, ‘Do you guys wanna stay late? Let’s shoot.’

“It’ll be a Saturday or Sunday when we don’t have practice and she’ll be out at the fields doing sprints with parachutes or shooting, or doing something to do with soccer. It could be juggling in her living room or weightlifting, or anything. She’s very passionate.”

It’s not just Slattery who’s reaping the rewards of her hard work, either.

Venice (6-3-1) has beaten teams such as Lakewood Ranch (twice), Braden River, Port Charlotte (twice) and Doral Academy on the way to a No. 51 ranking in the state and No. 94 ranking in the U.S.

“She speaks her mind, and she’s very confident about it,” senior midfielder Rachel Dalton said. “Especially when we have a captains’ practice and the coaches aren’t there, it’s more like a ‘Kiki’s practice.’

“She takes charge and does her own thing, and it works for us.”

A handful of games still remain on the schedule before Slattery and her teammates begin one last run together in the playoffs — with three straight district titles and last year’s regional title under their belts.

But no matter what happens in the coming weeks, it’s a safe bet that you can find Slattery and her teammates grinding out some extra practice reps on a soccer field somewhere.