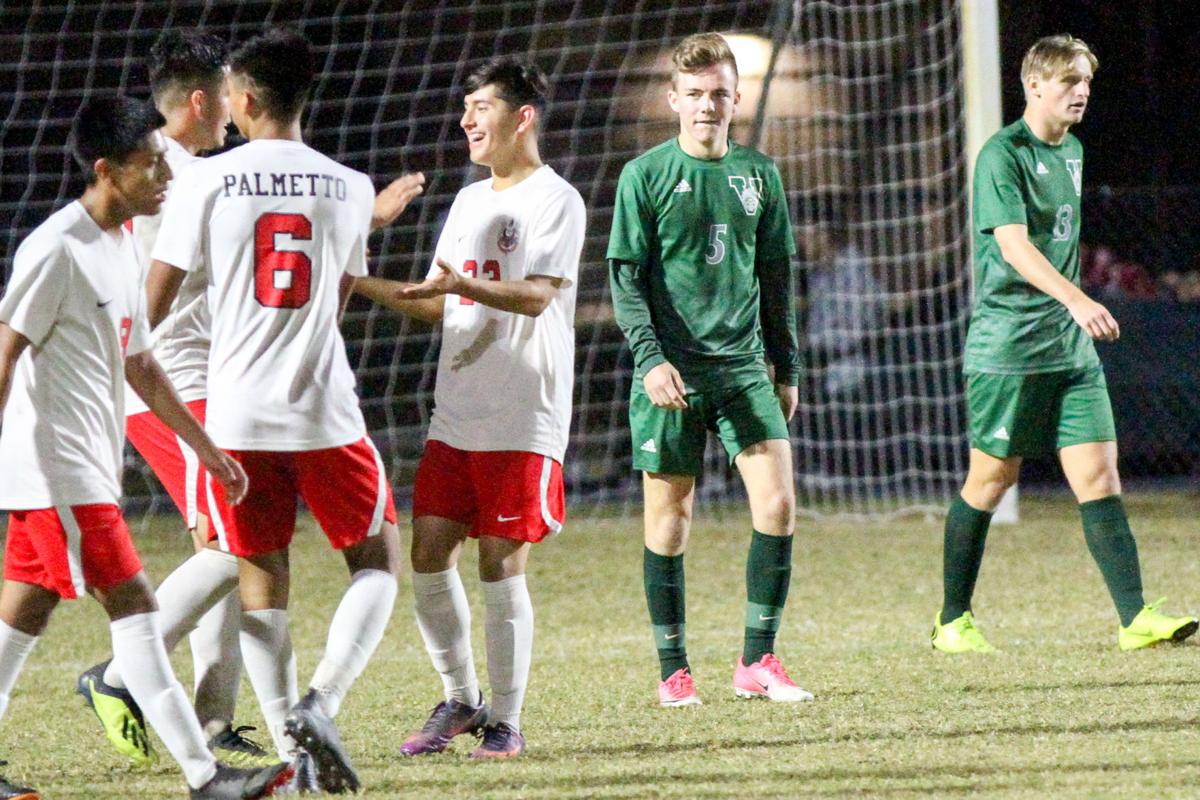 Venice players look on as the Tigers celebrate their first goal in the 48th minute to take the lead. 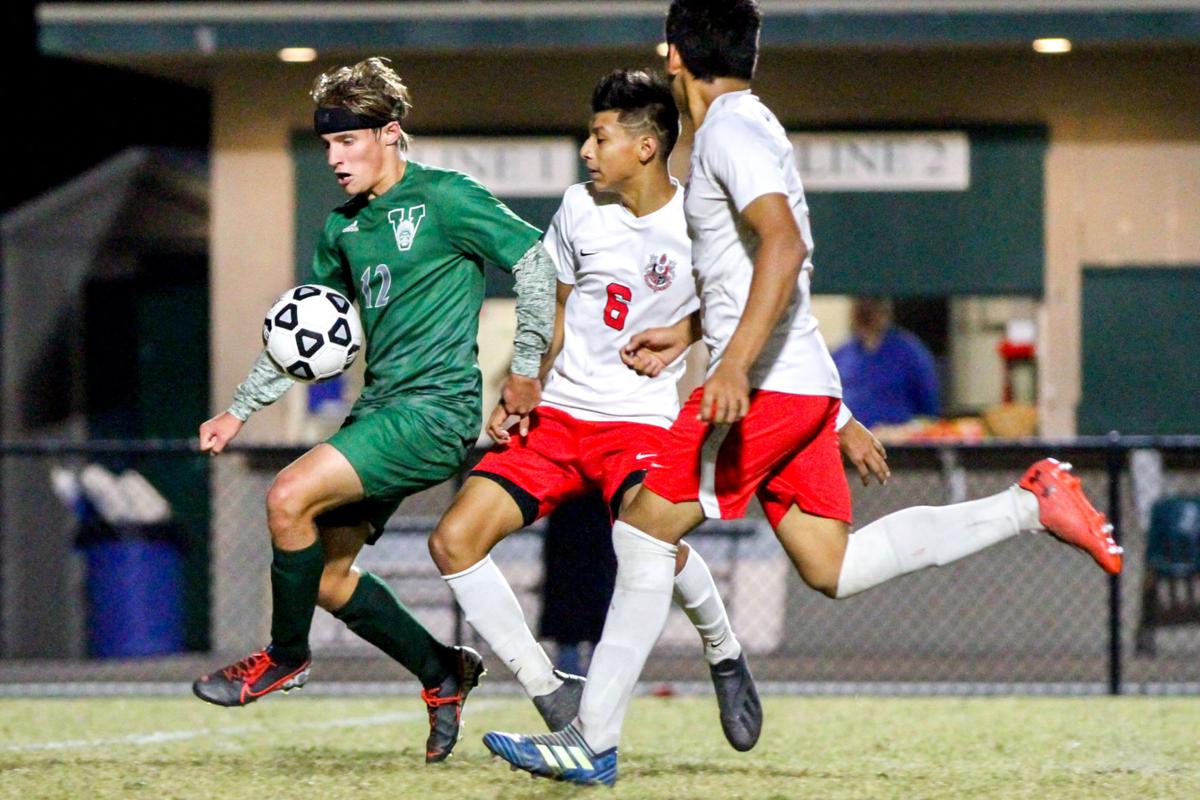 Venice junior forward Max Mergos had a couple of chances to score in the first half against Palmetto, but couldn’t finish his breakaways in a 2-0 loss. 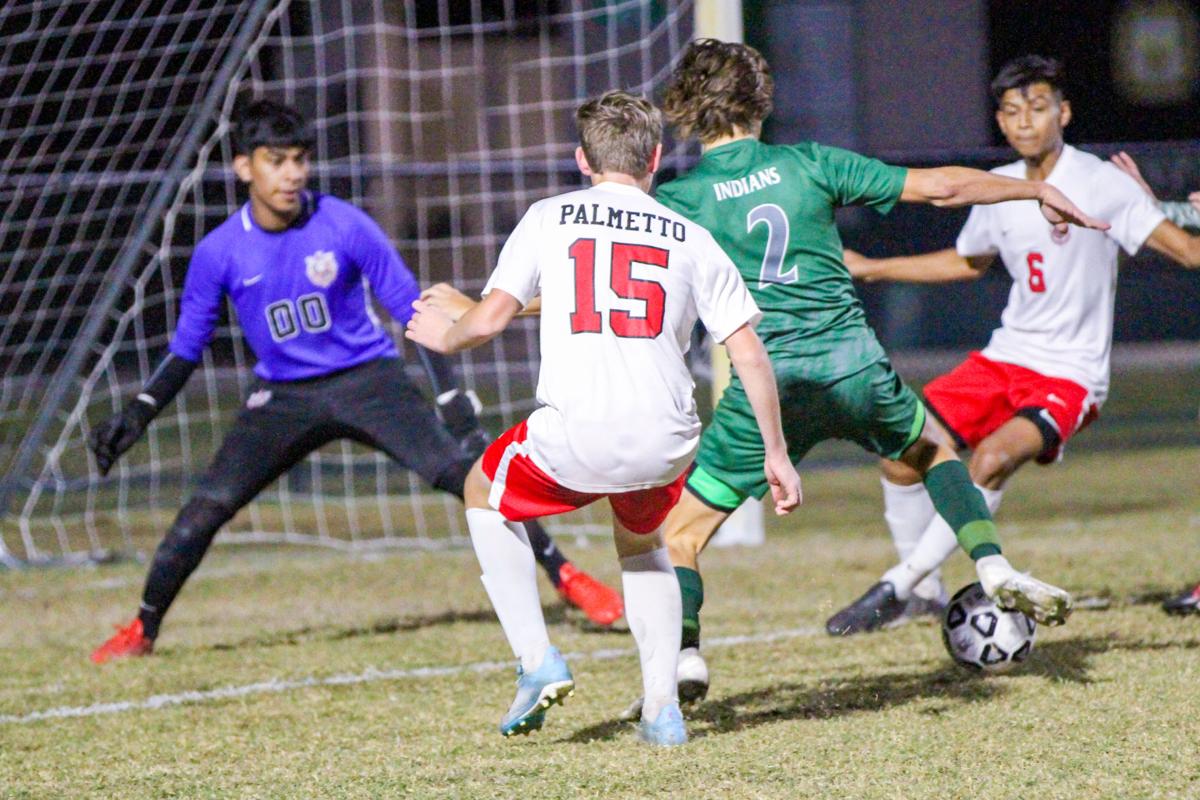 Diego Heredia has scored 3 goals this season for Venice and had a few chances to pad that total on Friday night, but was denied by Palmetto goalkeeper Alexis Ramirez on each try.

Venice players look on as the Tigers celebrate their first goal in the 48th minute to take the lead.

Venice junior forward Max Mergos had a couple of chances to score in the first half against Palmetto, but couldn’t finish his breakaways in a 2-0 loss.

Diego Heredia has scored 3 goals this season for Venice and had a few chances to pad that total on Friday night, but was denied by Palmetto goalkeeper Alexis Ramirez on each try.

The Palmetto boys soccer team got the best of Venice last season, shutting the Indians out three times, including once in the district playoffs to end their season.

Those Indians finished last season 5-14-1 but entered Friday night’s match against the Tigers at 3-3, looking to see how they would respond to the early season challenge at Powell-Davis Stadium.

Though they had some first-half opportunities by forwards Max Mergos and Diego Heredia, Venice (3-4) couldn’t capitalize in a 2-0 loss to Palmetto.

“Palmetto is always very good,” Venice coach Peter Tomich said. “They kept control of the game pretty much, but how many times did we have an opportunity to put the ball in legitimately in the first half? If we finish, the whole complexion of the game changes.

“But I’m happy with the way the boys played. It was a good test for us.”

The loss capped a three-game week for Venice in which it posted a pair of clean sheets — a 4-0 win over Lemon Bay on Monday and a 5-0 win against Cardinal Mooney on Thursday.

After scoring just 0.7 goals per match last year, Tomich has stressed a more aggressive mentality and it resulted in nine goals this past week.

However, against a physical Palmetto team, he opted to play two forwards instead of his typical three-man attack.

“As these guys go through the year, I just want them to evolve the right way and it was a little difficult in the beginning. It’s just the style of play I want them to play.

“It’s putting as much pressure on their defensive third as possible. They’re starting to adhere to it, but there’s still a few who are deviating at times.”

Mergos broke free from the Palmetto defense twice early, including once in the second minute of the match, but couldn’t finish near the net.

Despite no goals from the Indians, tough physical defense and a couple of diving saves from Stefan Slavov (10 total saves) held the Tigers off the scoreboard for the first half.

Despite the Indians playing tight defense, it didn’t hold up long into the second half as Palmetto found an open man in the middle of the box and scored on a goal just past the outstretched hands of a diving Slavov.

Venice nearly answered a minute later, but a shot in the box was deflected just before it had a chance to go in.

The physicality between both teams ramped up a little after the opening salvo by the Tigers — with Venice receiving 4 yellow cards and Palmetto earning one.

Venice’s final yellow card happened to be Julyan Ormachea’s second of the match, sending him to the bench and forcing the Indians to play a man down for the final 20 minutes.

Soon after Ormachea’s exit, Palmetto made the deficit practically insurmountable as the Tigers scored on a cross into the box from Stephenson Cedor to J.D. Reynolds.

The Indians had chances to respond as a looping shot by Donovan Milano from 20 yards out was denied at the last second and a shot by Heredia was stopped with a slide by the goalkeeper.

“It’s just a matter of putting shots away,” Tomich said. “What I’m happy about is when we’ve won all these games it hasn’t been one or two guys scoring, it’s been a lot of them chipping in.

“But it was a good test tonight. I think it could have been a different outcome if we put our chances away.”