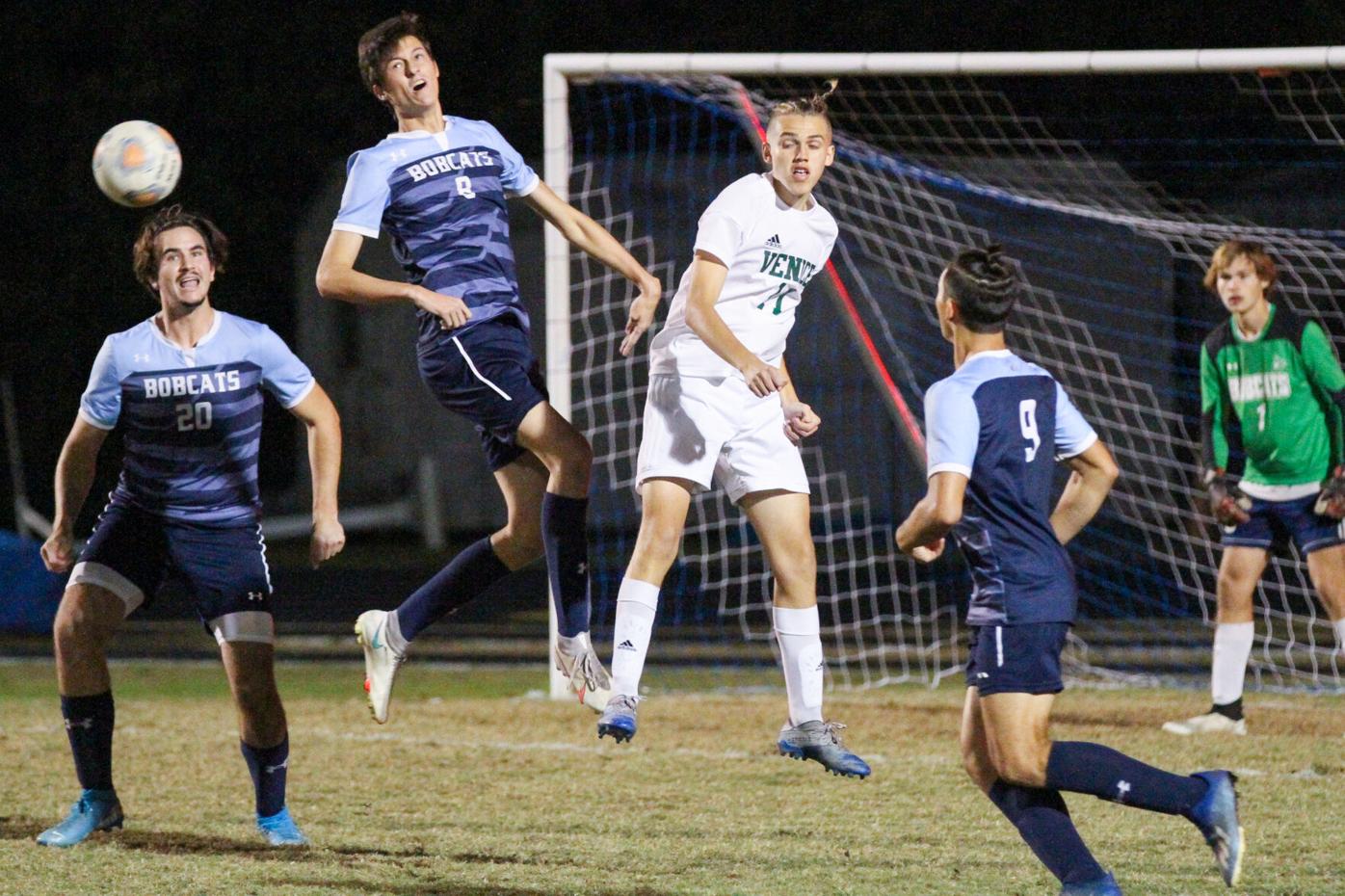 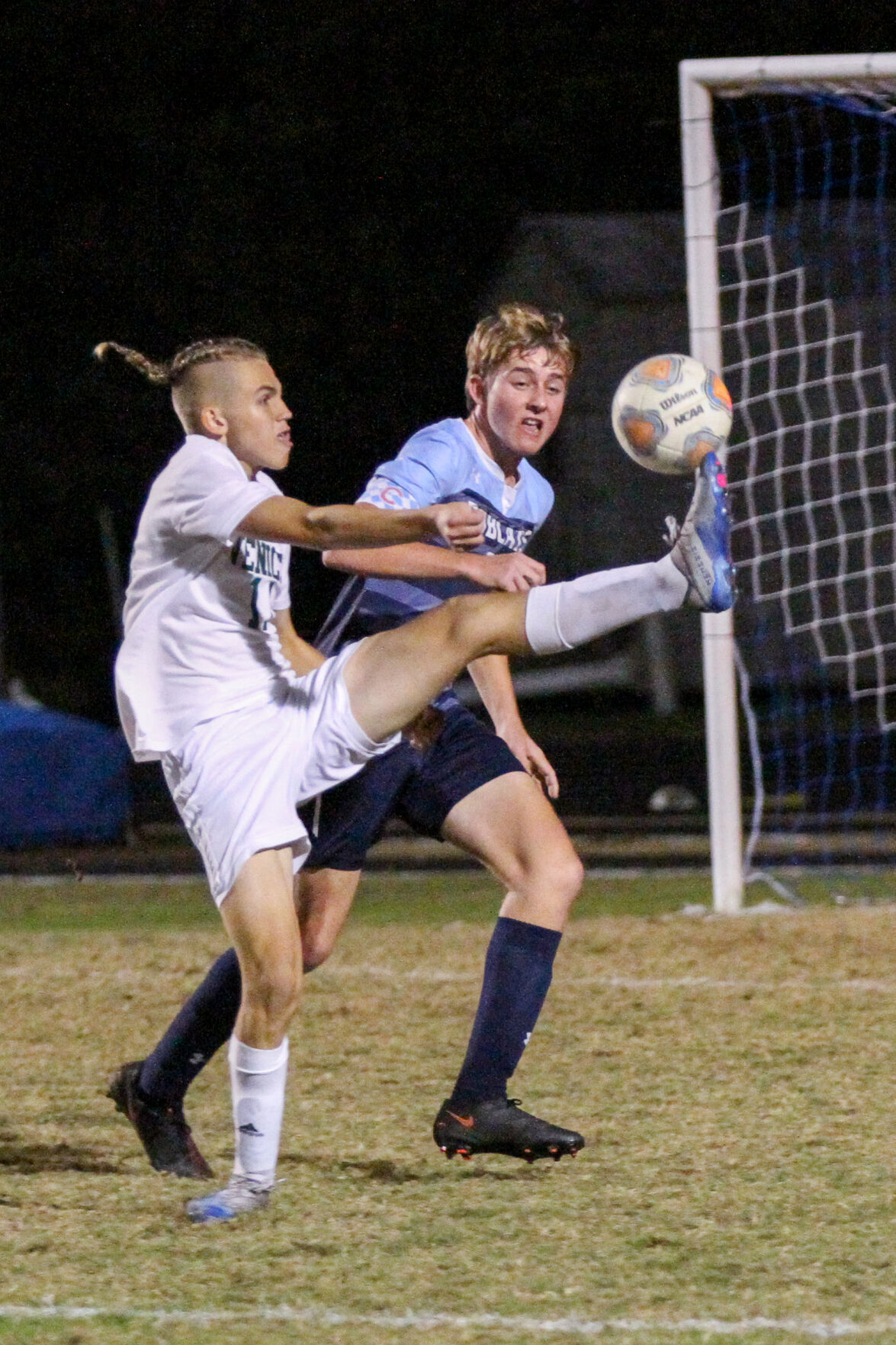 NORTH PORT — Venice scored twice in the opening eight minutes and that was enough for a 2-0 victory over North Port in a boys soccer match Monday night at the Preserve.

Diego Heredia got the Indians on the board in the third minute of the game with a shot from close in on the left side. Four minutes later, Luca Rueda got the ball in deep and beat Bobcat goalkeeper Edgar Alejo for a quick 2-0 lead.

“It was nice,” Venice coach Dave Porvaznik said. “We believe in keeping (the) pressure going and we have to stay solid from the top t-o the back. Having a lead right off the bat definitely helps in relieving some pressure. But we still move forward and we don’t stop. It’s whistle to whistle every single time.”

The early deficit proved to be too much for the Bobcats to overcome, even though North Port seemed to settle in after the rocky start.

“It’s obviously not ideal, especially in a crosstown rivalry game,” Bobcats coach Joey Sorbino said. “It was not the game plan to go down two goals early, that’s for sure. But there wasn’t much surprising there from Venice. We knew what they wanted to do and with some missed assignments from us, we weren’t ready to go at full pace off the start.

“So props to them, they capitalized on it, they finished their chances early and got the lead. It was an uphill battle, but I thought we did a good job in the second 40 minutes of finding our way into the game.”

The Bobcats barely had any chances in the first half, but were able to create some scoring opportunities in the second.

“Our guys came off halftime frustrated,” Sorbino said. “Trying to understand what they did wrong and what they needed to do to fix it. It wasn’t anything different that what we talked about at the beginning. We kind of had to hit that mental reset so that we could find our way back into the game. Looking back at it now, it’s just about finishing some chances.”

Despite a big shot advantage in the second half, North Port couldn’t put anything past Indians’ goalkeeper Stefan Sinapov.

“Stefan is an amazing keeper. We are solid top to bottom,” Porvaznik said. “Every person is equally as important as the player next to them. We check our egos at the door and we support each other and lift each other up and it’s been a huge turnaround.

“And although Stefan is an unbelievable keeper, he doesn’t let that go to his head and he tells the person next to him ‘Hey you’re just as good’ no matter what. We make the boys believe in themselves and that’s huge.”

With their first victory over the Bobcats in three years, the Indians improved to 8-2 on the season. North Port fell to 6-4-3.

“These guys play each other in club soccer and they’ve known each other for years,” Sorbino said. “Even coming up through JV and varsity the last couple of years, we’ve seen everybody that’s on the field. Their speed was not something that shocked us, but again, you give props where it’s due. They capitalized on some early mismatches and found those overlapping runs and we just weren’t prepared for it.”

The Bobcats will have a quick turnaround, hosting North Fort Myers on Tuesday night. Venice will be home against Charlotte for Senior Night on Wednesday.