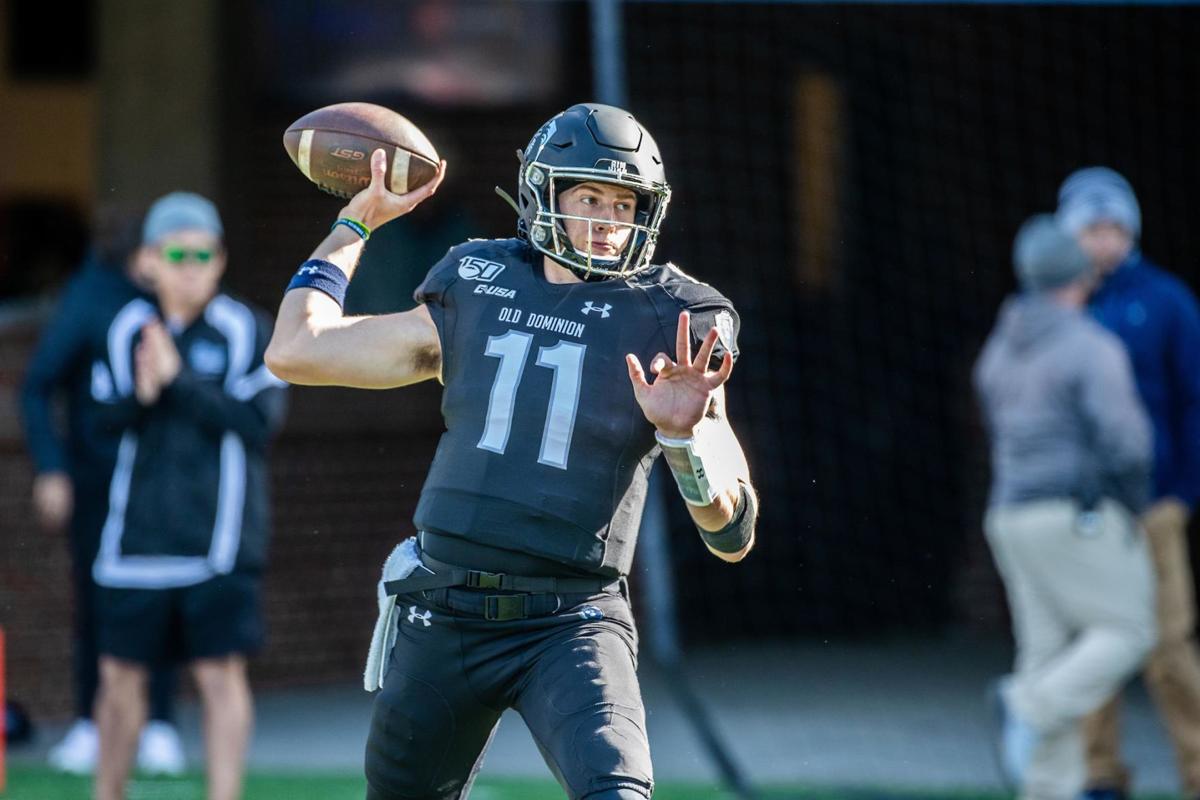 The Old Dominion coaching staff didn’t originally intend to start redshirt freshman quarterback Hayden Wolff this season but a seven-game losing streak and his excellence in practice forced their hand. 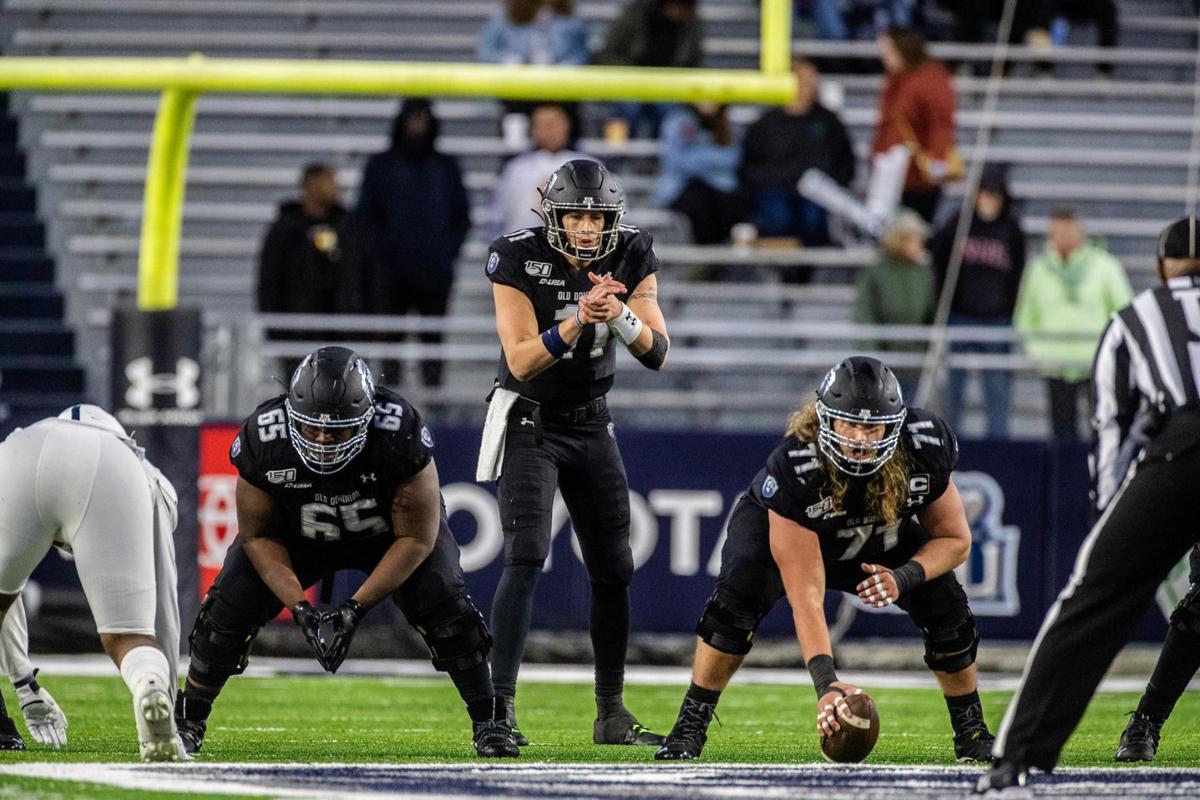 Hayden Wolff threw for 737 yards, 2 TDs and 3 INTs across three starts for Old Dominion this season as he overcame offseason surgery to repair the labrum in his throwing shoulder.

The Old Dominion coaching staff didn’t originally intend to start redshirt freshman quarterback Hayden Wolff this season but a seven-game losing streak and his excellence in practice forced their hand.

Hayden Wolff threw for 737 yards, 2 TDs and 3 INTs across three starts for Old Dominion this season as he overcame offseason surgery to repair the labrum in his throwing shoulder.

Hayden Wolff got his first taste of adversity before he even began is collegiate career.

The current Old Dominion quarterback tore the labrum in his throwing shoulder in Venice’s 28-21 win over Braden River in the second round of the high school playoffs on Nov. 16, 2018 — which added a level of uncertainty to his future as a Monarch.

Wolff gutted out the injury for the remaining two games of his high school career, winning a regional championship before losing in the state semifinals to St. Thomas Aquinas.

But the long road ahead of him was only getting started.

“I didn’t make a big deal about (tearing my labrum) because I was still planning on going to college to play,” he said. “I tore it and kept it on the low. I did a bunch of rehab, did anything I could to keep it healthy and got a cortisone shot. Then I had offseason surgery when I got to college.

“But I wasn’t going to hurt my teammates. Once it’s torn, it’s torn, and it can’t get any worse than that, so I made the decision that I was gonna finish the season and try to win a state championship.”

The 6-foot-5, 214-pound quarterback wasted no time making his way to Virginia Beach after he graduated from Venice High in December and enrolled at Old Dominion for the spring semester.

However, much of that time was devoted to his recovery as he spent two hours a day in rehabbing an injury that Monarchs quarterback coach Ron Whitcomb said “quarterbacks have a 50-50 shot of coming back from.”

“We found out about two weeks after his injury occurred,” Whitcomb said. “Obviously as a coaching staff, it’s very concerning any time a quarterback tells you he tore his labrum.

“But we felt like it was the right thing to honor the commitment and roll the dice on him.”

Along with a lengthy recovery, Wolff had to contend with the arrival of junior-college All-American quarterbacks Messiah deWeaver and Stone Smartt.

The plan was to redshirt Wolff until the final four games of the season — the NCAA allows players to maintain a redshirt if they play in four games or less — and see what the true freshman could contribute.

After Old Dominion opened the year with a 24-21 win at Norfolk State, the offense struggled. The Monarchs tumbled to last in the nation in yards per game as the team lost its next seven games.

“We started to see his intellectual and physical talents probably halfway through the season,” Whitcomb said. “In practice, he clearly was showing the gifts that he showed in high school.

“We really felt like we needed a spark at the quarterback position. We decided to give him an audition in practice and he knocked it out of the park.”

With few options left and Wolff excelling in practice, it became an easy decision for head coach Bobby Wilder and his staff. Wolff was told he’d be starting the morning of the Nov. 2 game at Florida International.

“I came out on Tuesday (of that week) and had probably the best practice I’ve had here,” he said, “and I think that opened their eyes a little bit. So the plan was that I was going to play maybe 10-15 plays, and get my feet wet. They ended up deciding right before the game that I was gonna start.”

Though the freshman threw for just 169 yards and no touchdowns, the offense scored 10 fourth-quarter points to come up just short in a 24-17 loss.

From that point on, the Monarchs tailored their offense to Wolff and the results improved each week.

In his third start, against Middle Tennessee State, the Monarchs allowed Wolff to pass 65 times — and he threw for 321 yards, 1 TD and 1 INT, by far the ODU’s biggest offensive output of the season.

But just as Wolff was finding some success, problems with his shoulder began to re-emerge.

He felt pain after taking a couple of hard hits in the loss to Middle Tennessee State and needed a shot at halftime to finish the game.

Though Wolff found out later that he had a rotator cuff contusion and no torn ligaments, the coaching staff chose to bench him for the team’s final game against the University of North Carolina at Charlotte.

To add to the quarterback’s challenges, Wilder announced his resignation after the season, leaving Wolff unsure of what the offense will look like in 2020.

“It’s tough. I committed to play for him and his staff and he’s not gonna be here anymore,” the quarterback said. “I plan on sticking it out. I’m waiting to see who they bring in, but I want to stay here.

“I was really comfortable with the offense. But it sucks that it’s not gonna be like that next year. It’s been on my mind heavily.”

Wolff still has four more years of eligibility remaining and he’s learning how to deal when things don’t go as planned.

“I took a lot of life lessons from this season more than the game of football,” Wolff said. “It taught me that no matter what, through adversity you always have to put your head down and keep working.”