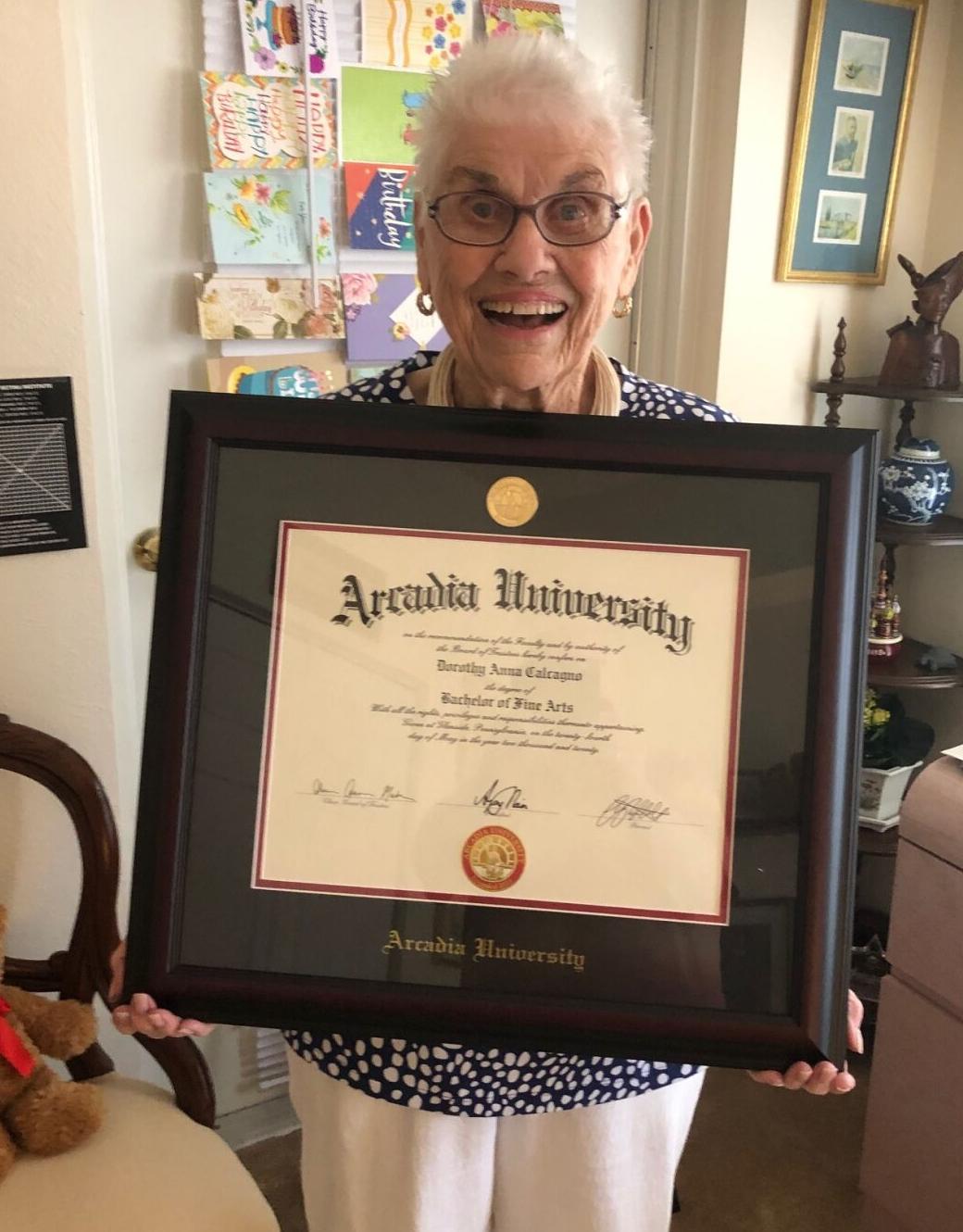 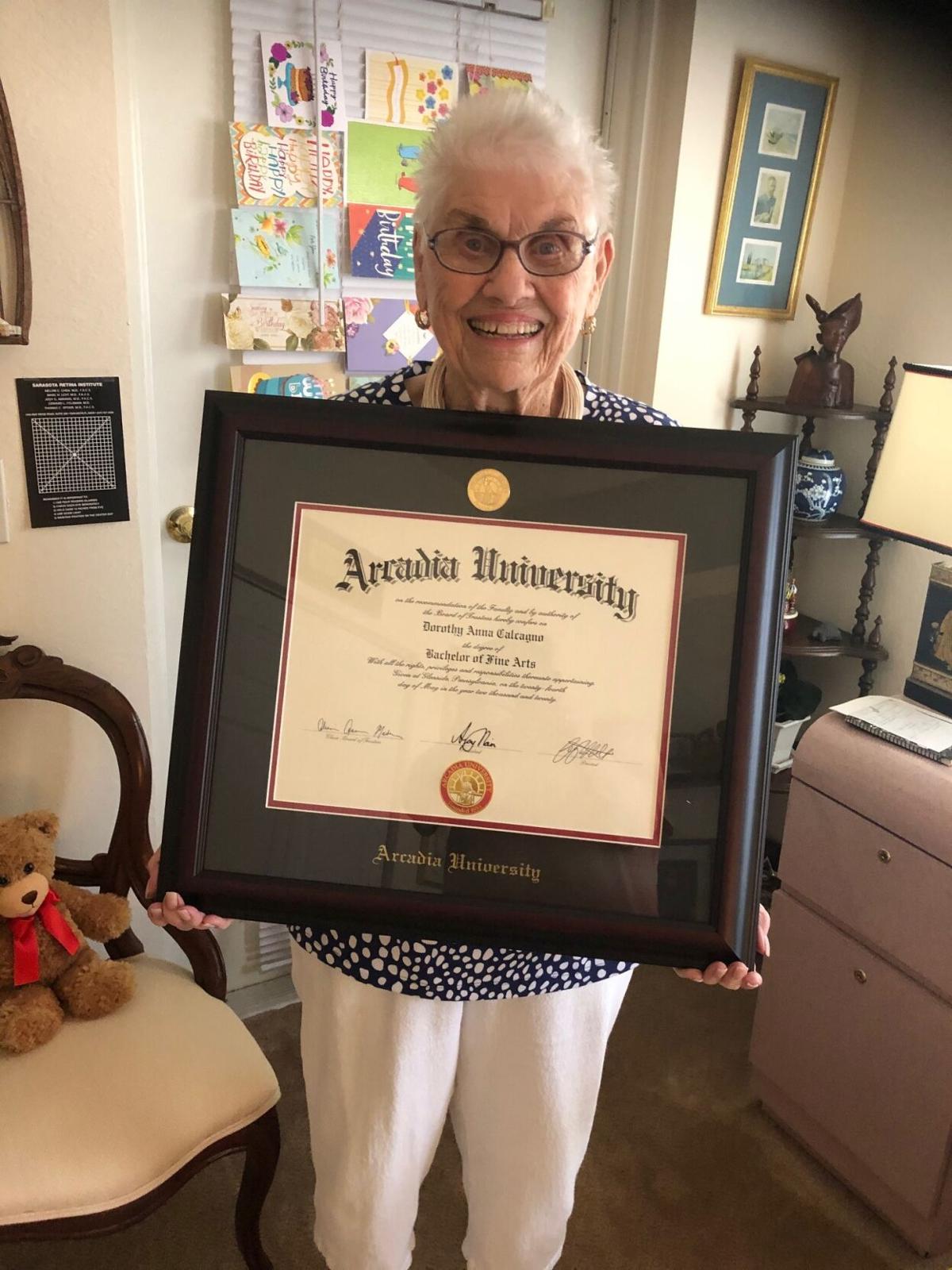 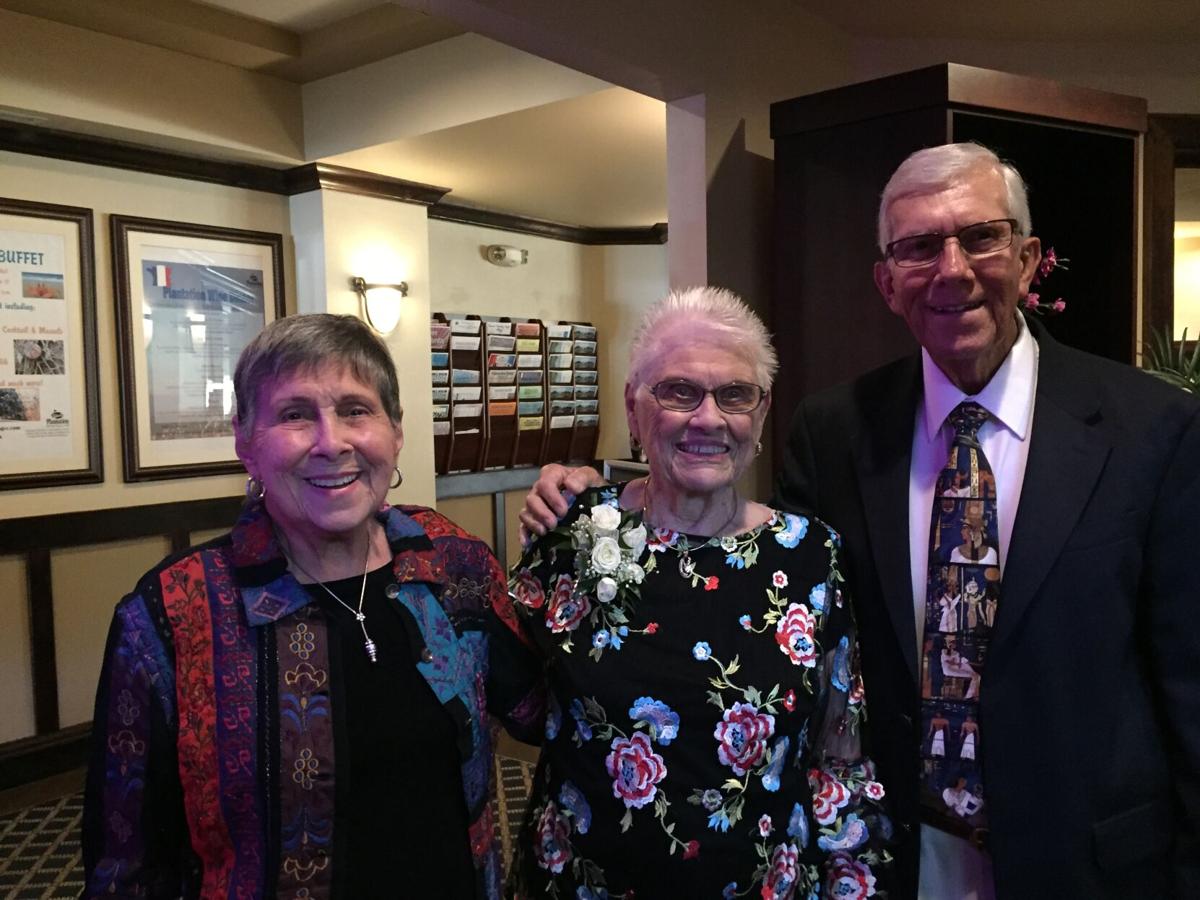 VENICE — Dorothy Caten earned credits for her college degree more than 79 years ago.

World War II had just begun and she went out to California with her future in-laws to marry her fiance. He was in the U.S. Army and being shipped overseas was a very real possibility.

After break — and her wedding vows — she called Beaver College to inquire about receiving her college degree and noted she was no longer single.

Because she was married, her degree was refused. She had a husband now, she was told. She didn’t need a degree.

“It was futile … at that time,” she said. “Can you imagine that today?”

She finally received her degree — on her 101st birthday.

It goes back to the time period, Caten said.

“At the time, because of the war, it didn’t really faze me too much. I didn’t think about it too much,” she said. “This was World War II and everybody was gung-ho …. I just waited for my husband to return and the war to be over.”

Beaver College was a Presbyterian-associated school for women in Glenside, Pennsylvania, near Philadelphia, when she was attending.

She was working toward a bachelor’s degree in fine arts and dreamed of being a fashion designer.

“The friendships were very, very important to me that I had made. It was an entirely different time,” she said.

It wasn’t until recently that she even started talking about her younger years and when her degree was refused because of the audacity of getting married.

She was talking with her son, Andrew Kuhn, about her history.

Kuhn, a Sarasota CNA for Tidewell Hospice, had no idea.

“It was never brought up. The first time I heard about it was five months ago,” Kuhn said. “It’s just something she never talked about.”

You don’t have to go back too long to find big differences in American culture.

“You have to deal with the times,” Kuhn said. “So I said to myself: Things have changed and let’s see what we can do.”

He contacted Arcadia University, which took over Beaver College and changed its name in 2001. Officials there looked into what happened, went through a process and then agreed — she had earned and deserved the degree.

Arcadia University officials were happy to provide the parchment.

“I only wish I could have been there to confer her degree and deliver the diploma to Dorothy Caten in person,” Arcadia University President Ajar Nair said in a statement. “COVID-19 disrupted those plans, but we are grateful to her son for reaching out to make sure she had this surprise for her 101st birthday. “

Caten has a new piece of fine art on display in front of her favorite chair: a bachelor’s degree in fine arts from Arcadia University.

“I have it on my wall across from my comfortable chair so I can look at it every day,” Caten said.

Kuhn presented the degree to his mother on her birthday, May 24.

She said she was “stunned” by the degree.

“I cried, of course. I was so happy about it. But I was sad about it,” Caten said.

Her regret: Her parents didn’t live to see the degree given to her.

She said she didn’t quite expect the reaction to the withholding of the degree when she started mentioning it during a meal with friends.

“These people were absolutely irate,” she said. “They were more astounded at the story, but they understood that 1940s were a different time.”

But nobody had any idea about her past.

Among them were her friends Jan and Donald Lutz, former neighbors of her at the Plantation in Venice.

“It was such an interesting story,” Jan Lutz said.

Hearing about the situation — the denial of the diploma and the eventual awarding of it — was “a very emotional experience,” Jan Lutz said.

“I started to cry and I still seem to want to cry when I talk about it,” she said.

It wasn’t uncommon in the era, Lutz said, noting what happened in her own family.

“My mother had a job and when they learned she was married, she lost her job,” Lutz said. “It’s just very sad but that’s just the way it was back then.”

Kuhn said his mother lived quite the life, divorcing and later remarrying and becoming a co-equal in her family’s cable television business in Ohio during the 1970s and 1980s.

“They did very well. She worked side-by-side. They made a wonderful business,” Kuhn said.

Kuhn said Caten adopted him and his brothers.

He said she’s always been a “loving and giving person.”

“She’s always reached out to other people to help them,” he said.

She worked even if she didn’t need to.

“She’s tough. And that’s what got her through the years. ... She always loved people and always wanted to do right for people. She’s always there for my brother and I.”

After growing up in New York, her life took her to Pennsylvania, California, Ohio and back to New York before moving to Venice in 1992. For decades, she lived in the Plantation. She moved into Aston Gardens eight years ago.

At Aston Gardens she loves bridge and trivia games along with walking and exercises — and helping others.

“Even today,” Kuhn said. “A friend at Aston Gardens might need medicine and she’ll get them.”

Gender roles have changed in the last century. And for all the ugliness of World War II, Caten notes the war was a factor in changing that — making it so women have more choices than when she was a young wife.

She wonders how many other women of her era fell into the same situation.

“I don’t know if this happened to anyone else, but maybe it did. But we’ll never know,” she said.

Her son notes even since he was a teenager, more things have changed.

“When I graduated in 1964, there were girls who were pregnant and they couldn’t graduate. Today, a girl who is pregnant can graduate,” he said.

The longer time went, the less Caten worried about the degree.

“I didn’t press it. I didn’t think too much about it. So many years had gone by that it was something in the distant past.”

Caten was brought to tears when she learned of the degree.

“She was thrilled; she could not believe that anybody would go and do something like that. That anyone would go that far … I wasn’t sure. When I told her, she started to cry.”

Lutz is also happy for her.

“She’s a lovely woman, she really is,” Jan Lutz said.

Caten said that even at 101, there are still some lessons to learn.

“Never give up. Something can occur that makes your life a little bit more happier.”

“Never give up. Something can occur that makes your life a little bit more happier.” - Dorothy Caten, college graduate at 101