You are the owner of this article.
Edit Article Add New Article
Login
I want to
Publications
Subscribe
Restaurant Directory
Homes for Sale
Cars for Sale
Jobs
Classifieds
E-Paper
News Archives
Calendar
App
Public Notices
Your Newspapers
Contact Us
1 of 3 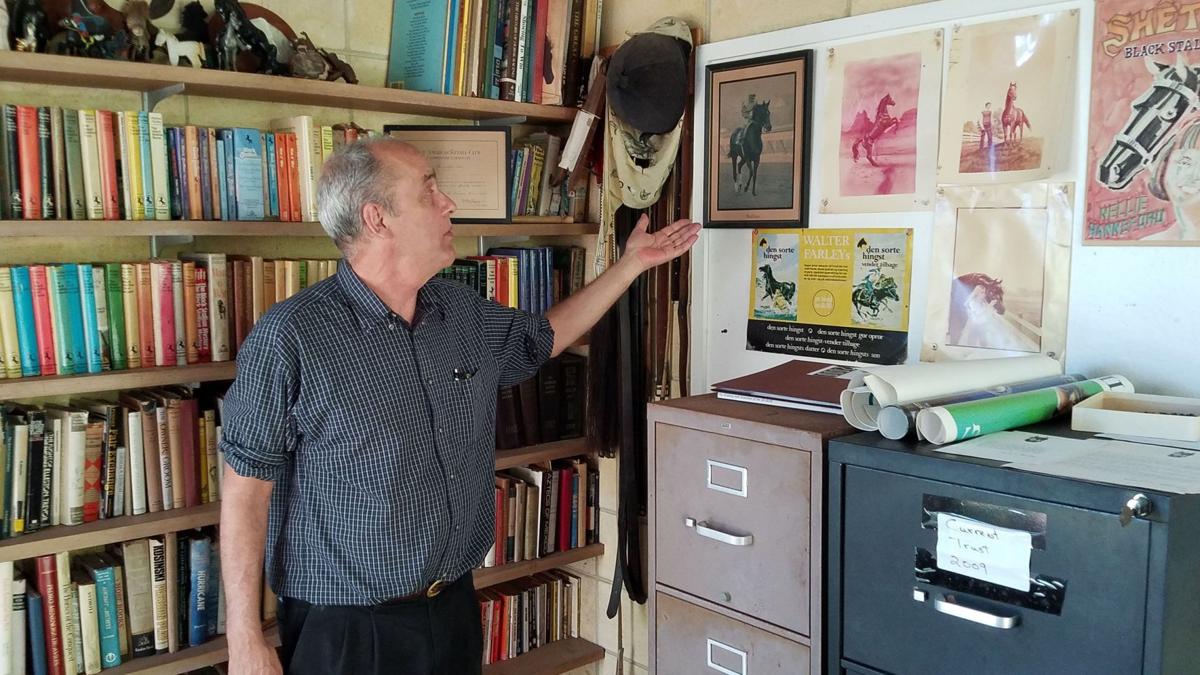 Steve Farley gestures to some of the memorabilia in father Walter Farley’s writing studio, which has remained untouched since his death more than 30 years ago. 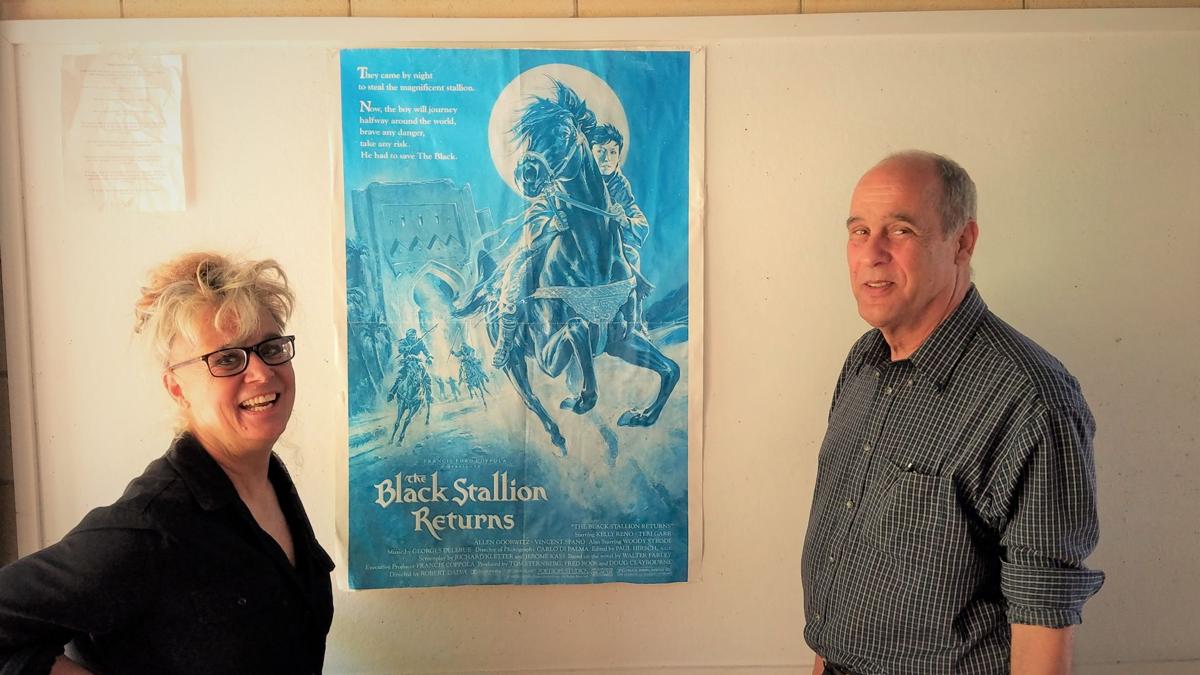 Alice and Steve Farley pose with a poster of one of their father’s book covers. Although they live in New York City, their childhood home in Venice is a wonderful reminder of growing up on the Gulf Coast. 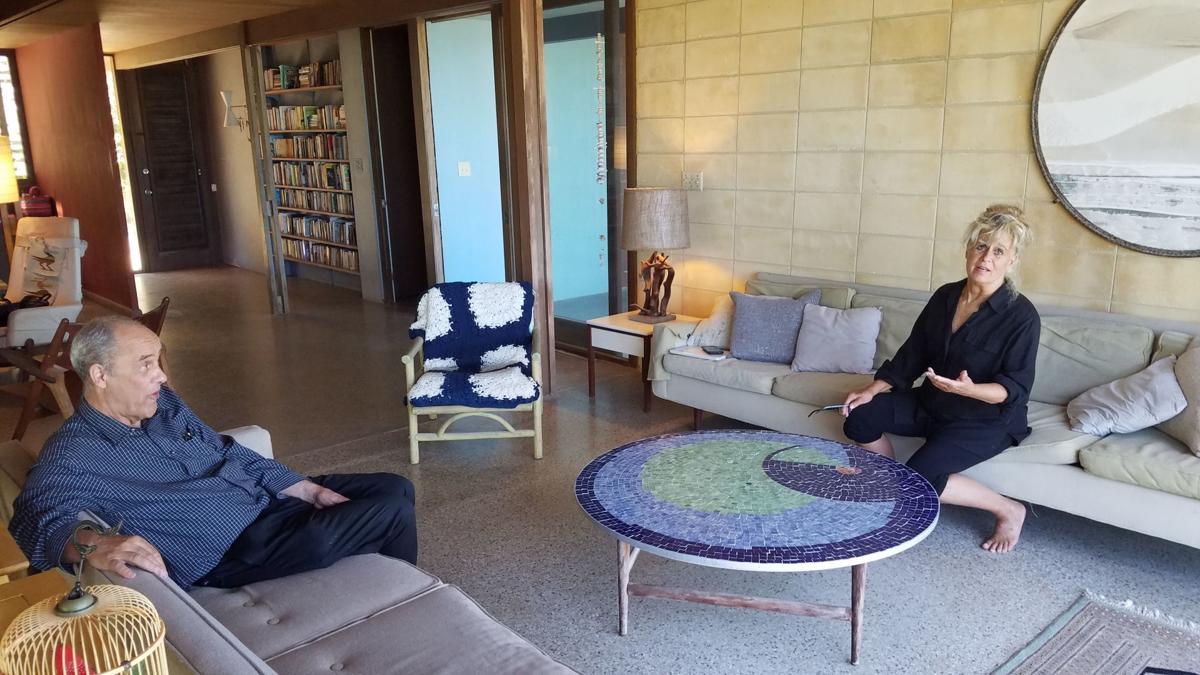 Alice Farley describes a mosaic tile coffee table designed by their mother, Rosemary. Alice said growing up in the unique beach house was great for developing their imagination as well as influencing her own sense of design. Rosemary worked with legendary architect Ralph Twitchell in designing the house in 1956.

Steve Farley gestures to some of the memorabilia in father Walter Farley’s writing studio, which has remained untouched since his death more than 30 years ago.

Alice and Steve Farley pose with a poster of one of their father’s book covers. Although they live in New York City, their childhood home in Venice is a wonderful reminder of growing up on the Gulf Coast.

Alice Farley describes a mosaic tile coffee table designed by their mother, Rosemary. Alice said growing up in the unique beach house was great for developing their imagination as well as influencing her own sense of design. Rosemary worked with legendary architect Ralph Twitchell in designing the house in 1956.

Although he has been dead for three decades, Walter Farley’s writing studio seems as if Venice’s most successful author has only momentarily stepped away.

A pair of his boots protrudes from under his desk. Shelves and surfaces are covered with books, family photos and sculptures of horses. On the walls are posters of jacket covers of some of his many popular “Black Stallion” books.

A visitor soon realizes he is standing on hallowed ground.

“Growing up, I got to see how [writing] worked,” said son Steve, who would go on to become a writer in his own right. “It’s a tough way to make a living and Dad saw that as much as anybody. He just got lucky. He would get up early and sometimes work late at night. We weren’t allowed to watch television for the longest time. There was a lot of reading going on in our house.”

Although Steve and sister Alice live in New York City, Mexico, and elsewhere, they are visiting their childhood beachfront home in Venice’s Gulf Shores subdivision and remembering what life was like on the Sun Coast in simpler times.

“There were no condos or high-rise buildings in those days,” Steve said. “Just a few homes scattered on or near the beach.”

An alligator lived in the stream adjacent to their house. A neighbor considered it a pet and fed it daily.

The first short story Steve ever sold was a fictionalized account of that alligator.

“We were pretty much beach kids,” Alice said. “There was no beach renourishment in those days. The beach was hardpan and then the white sand. We would make houses out of driftwood.”

“We’d find large fossils and sharks’ teeth and, as we grew older, we’d dive out on the reef,” added Steve.”

Their father wrote his first children’s book, “The Black Stallion,” at age 26 while working at a New York City advertising agency and taking writing courses at Columbia University.

“He grew up dreaming of horses,” Steve said. “In fact, some of the first horses he ever saw were in Central Park.

“His father managed the restaurant and bar at the Roosevelt Hotel, where they lived for a time. Dad also had an uncle who lived upstate who was a horse trainer. He would go there to visit the uncle. The first date that he went on with our mom was going horse riding through Central Park.”

Walter’s book-writing career was interrupted by World War II. He was sent to the Aleutian Islands, where he reported for the Army’s Yank Magazine, alongside fellow author Dashiell Hammett.

But during his time overseas Walter was able to begin work on his second novel, called “The Black Stallion Returns.”

In all, Walter he would write a total of 21 “Black Stallion” stories as well as more than a dozen other books. The series proved immensely popular with children everywhere and was translated into several languages, and three of the books were eventually made into movies.

The books have never gone out of print.

Walter, his wife, Rosemary, and their four children eventually settled on a 50-acre farm in Earlville, Pennsylvania. The manner in which they first learned of Venice, Steve said, was through a fan of one of Walter’s novels.

“He began each day by answering letters from his fans. One of them wrote and said her parents operated the Worthington Apartments here in Venice. That started a conversation, which led to them coming down and staying in an apartment for a period of time.”

Alice said her family originally lived in a small Higelville beach cottage. Then in 1956, Rosemary worked with Ralph Twitchell, one of the notable architects in the famed Sarasota School of Architecture, in designing their four-bedroom, four-bath beach house.

Complete with floor-to-ceiling glass windows, 8-foot doors and a fireplace designed by fellow architect Paul Rudolf, the house is no doubt one of Venice’s best examples of Sarasota School of Architecture design.

“There is so much glass in this house, it brings the outside in,” said Alice, who founded the Alice Farley Dance Theater in New York City. “At our young age, we didn’t realize how radical the design of this was. You didn’t appreciate what you had until you ended up living in an apartment in New York or L.A.

“The house is minimally invasive on both the land and on your eye. I later became a designer. I felt the whole experience of growing up here really shaped my sense of design. It was a gift as much as a great place to grow up.”

Alice said a lot of their family’s experiences growing up in Venice served as the backdrop for many of their father’s books.

Their oldest sister, Pam, for example, owned a horse named Tena that served as the fictional inspiration for the book, “The Horse that Swam Away.” Walter dedicated the book to: “Pam, who rides the beach and ‘herds’ mullet; Alice, who talks to porpoises; Steve, who dives for pirate treasure; Tim, who swims to catch a manta ray’s tail, and of course, for Tena.”

Steve said some of his favorite memories of growing up in Venice were the nearby circus, surfing and going out on the family’s boat.

“I loved being able to ride my bike all around Venice, to visit the (Dick & Meadows) Rexall Drug Store,” Alice added. “For us, we could just head out the door and experience the nature all around us.

“How imaginary for us life was on the beach! Today, in the suburbs, you have groups of friends and the ability to play games. But in terms of solitary contemplations and inventions, we had the opportunity here to be a free child. Living here was great for developing your imagination.”

Both Walter and Rosemary were active in local affairs and made many contributions to the Venice community. They were founding members of Venice’s Friends of the Library and were instrumental in supporting the city’s first library, constructed in 1965.

Walter also enjoyed visiting with students in the local schools and encouraging them to pursue their dreams.

He died in 1989 following a debilitating stroke. Steve co-wrote the last of the Stallion books, “The Young Black Stallion,” with him.

Rosemary died in 2013 in the house she had helped to design nearly six decades before.

Although much of the original Farley property was sold in recent years, the beach house on 1.85 acres is currently for sale and the children hope the eventual buyer will preserve its legacy. For more information, contact Marty Lieberman with Premier Sotheby Realty at 941-724-1118.

Larry Humes writes about local history and can be reached at: 1926venice@gmail.com.