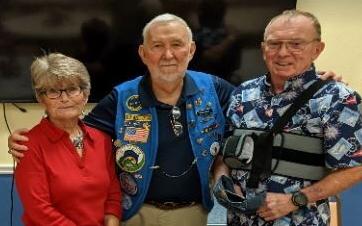 Jack McAllister, center joins Carla Gerle and Bob Gerle after their presentation about the Battle of Midway. 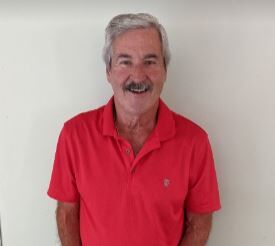 Jack McAllister, center joins Carla Gerle and Bob Gerle after their presentation about the Battle of Midway.

We were honored to have one of our members, retired Navy Chief Warrant Officer Bob Gerle, and his lovely wife, Carla (also a Navy veteran) present a very different account of the Battle of Midway.

Most accounts of the battle present the American side of the fight as a great victory won by combined Air Group assets flying from the three carriers (USS Enterprise, Hornet and Yorktown).

The bravery and sacrifice of their air crews truly made the difference, and the Japanese juggernaut was sent reeling in defeat with the loss of all four Imperial aircraft carriers.

The loss of so many trained pilots sealed their fate, marking the beginning of the end for the Japanese.

even though only the sketchiest intelligence data was available, is often cited as the

shining moment of his career.

Bob and Carla gave us a different view of the battle, introducing us to a little known fact: not all the attacking U.S. Navy planes flew from the three carriers. A contingent of crews flying the new Grumman TBF Avenger arrived in Pearl Harbor one day after Hornet sailed.

Although too late to join their carrier, six volunteer crews flew from Hawaii to Midway to join in the attack. All but one were shot down during the battle.

One of those heroic pilots was Carla’s uncle, Ensign Oswald “Ozzie” Gaynier, of Monroe, Michigan.

He regaled us with the highlights of his lengthy career spent as an engineer involved in dozens of successful programs providing hardware, software and support to the military. Most of his efforts provided products and support directly to the submarine community.

A dyed-in-the-wool submarine buff, Mr. Rock is an avid sailor who calls both Venice and Wells, Maine, home.

- George Palmer is with Submarine Veterans of USSVI Sailfish Base