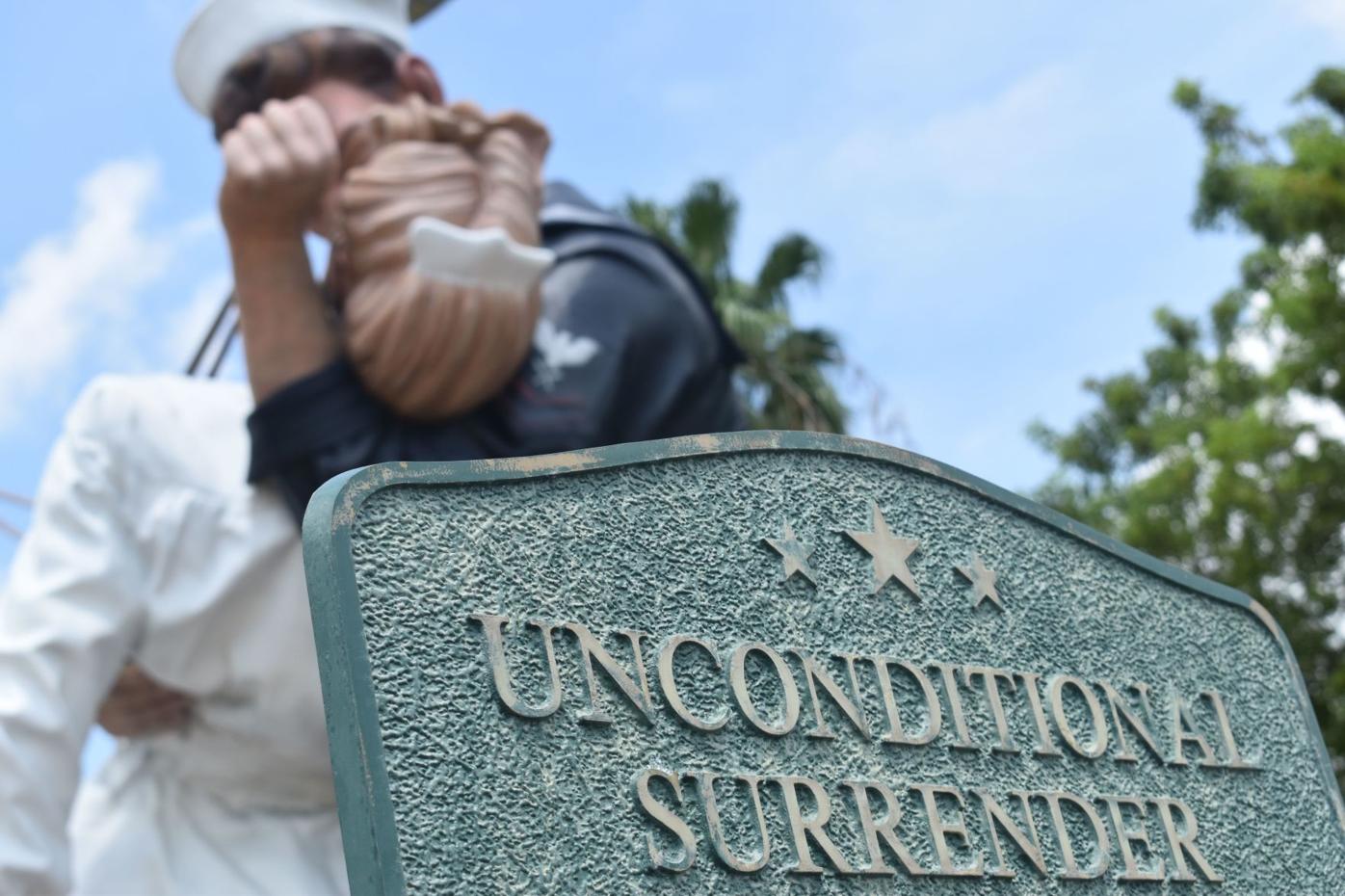 “Unconditional Surrender” is a 26-foot sculpture along U.S. 41 at Gulfstream Avenue in Sarasota. 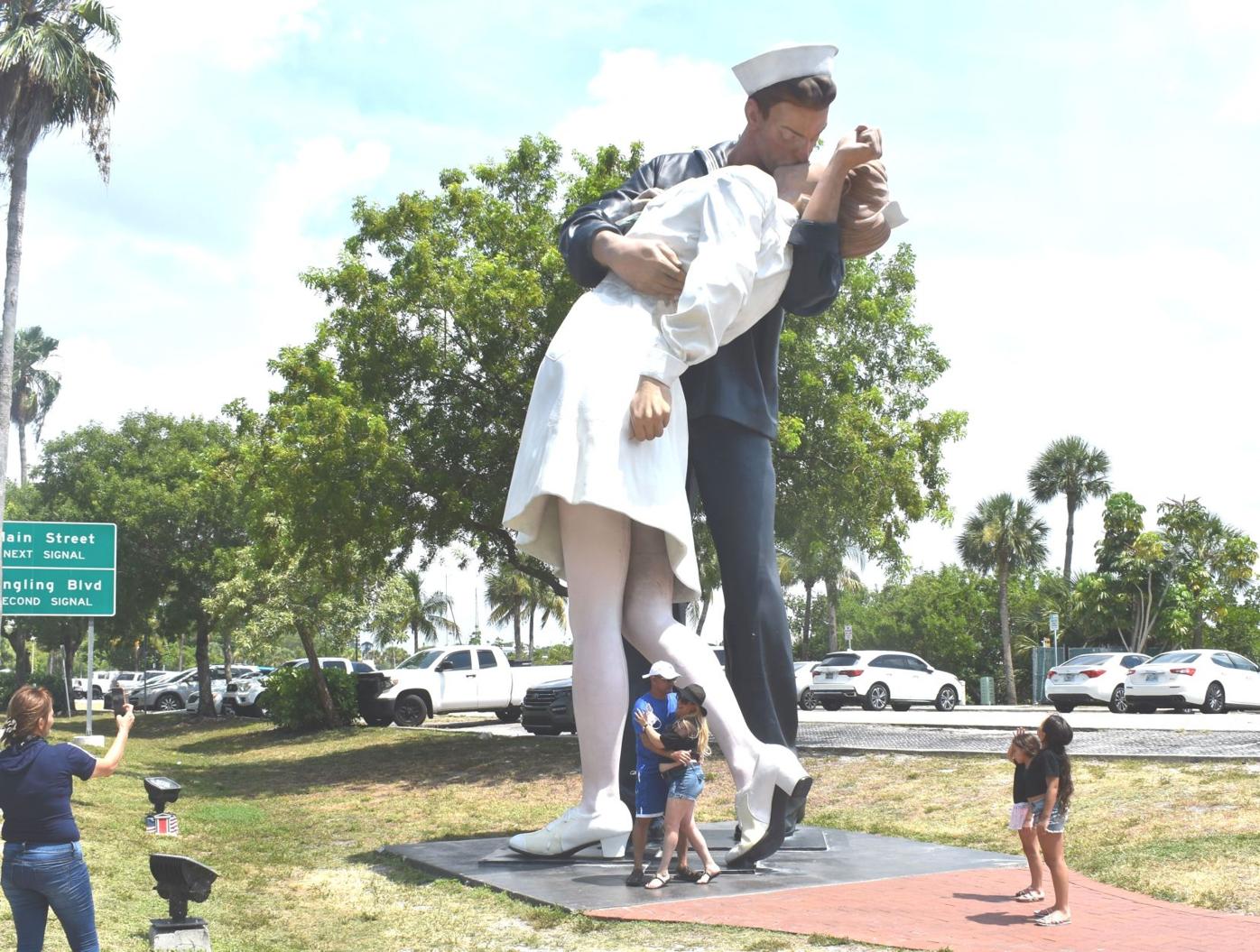 Miquel and Niuris Pujol embrace at the “Unconditional Surrender” monument in Sarasota as their daughters, Sophie and Stephanie, watch recently.

“Unconditional Surrender” is a 26-foot sculpture along U.S. 41 at Gulfstream Avenue in Sarasota.

Miquel and Niuris Pujol embrace at the “Unconditional Surrender” monument in Sarasota as their daughters, Sophie and Stephanie, watch recently.

VENICE — The decision by the city of Sarasota not to move a sometimes-controversial statue is being praised by an area congressman.

The Sarasota City Commission decided to keep “Unconditional Surrender” along the bayfront, moving it only a short distance away while road construction begins along a roundabout on U.S. 41 at Gulfstream Avenue in February.

Eventually, it will be relocated to an area between Marina Jack and O’Leary’s Tiki Bar and Grill, according to new plans.

“The statue symbolizes the end of World War II and should be celebrated, not relegated to a less prominent location,” Buchanan said.

He said the City Commission listened to “the will of the people.”

Buchanan had an online survey in August with about 90% of his constituents supporting keeping the statue in its place, he said.

“Unconditional Surrender” was created based on an iconic photograph from the day World War II ended. However, it’s noted that the woman in the original photo never wanted to be kissed.

The sculpture, which stands 26 feet tall along U.S. 41 near the Sarasota bayfront, has been criticized for representing a moment in history when a nurse was kissed by a U.S. Navy sailor in what has been since described as an unwelcomed touch.

The sculpture was based on an award-winning photo in Life magazine. The artist, Seward Johnson, died in March at the age of 89 in Key West.

After George Mendonsa, the sailor depicted, died in 2019, the sculpture was vandalized with the words: #metoo.

Mendonsa said he was coming out of a movie when people started screaming the war was over, he said. He was with the woman who would become his wife, but said he saw another girl in the street and decided to kiss her.

“I had quite a few drinks that day and I considered her one of the troops,” he said in an interview.

The woman depicted was a dental assistant. In interviews in 2005 and 2012, she said she wasn’t a willing participant in the moment.

“It wasn’t my choice to be kissed,” Greta Zimmer Friedman said in 2005. “This guy just came over and grabbed … the man was very strong. I wasn’t kissing him. He was kissing me.”

Nonetheless, many people consider it a moment showing the joy of the end of World War II.

“I heard from thousands of people in our community who strongly supported keeping the statue on prominent display at the bayfront,” Buchanan said. “The statue is also a reminder to younger residents of the sacrifices made to win a war that claimed so many lives.”