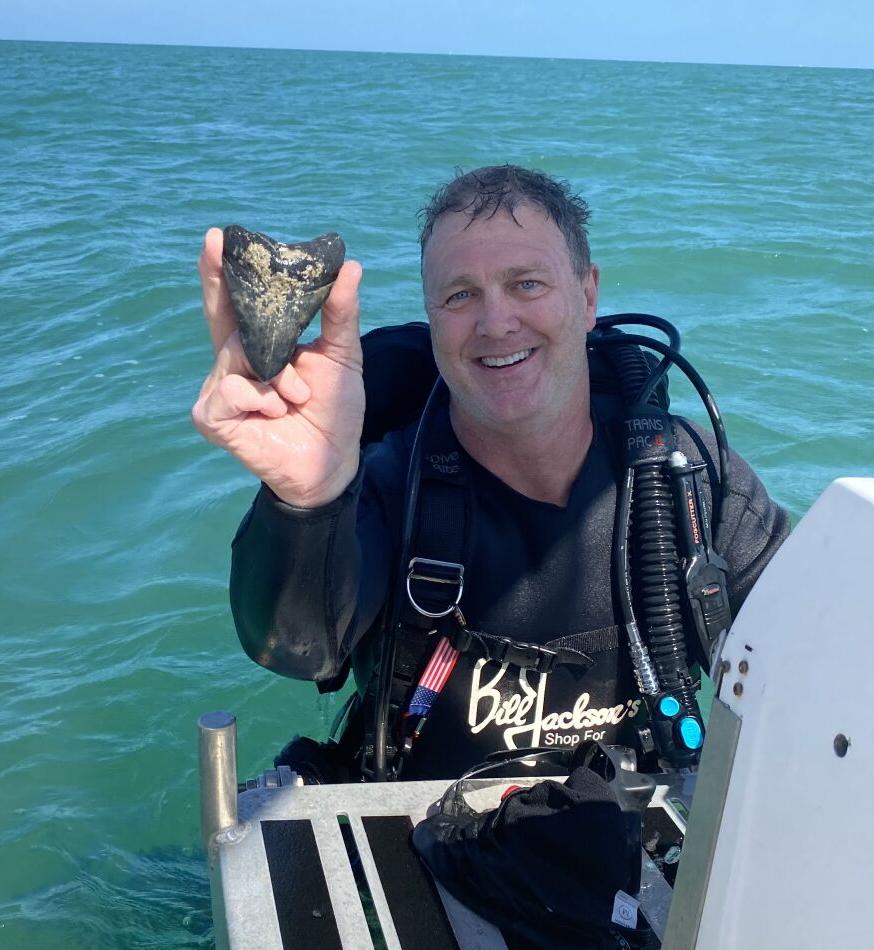 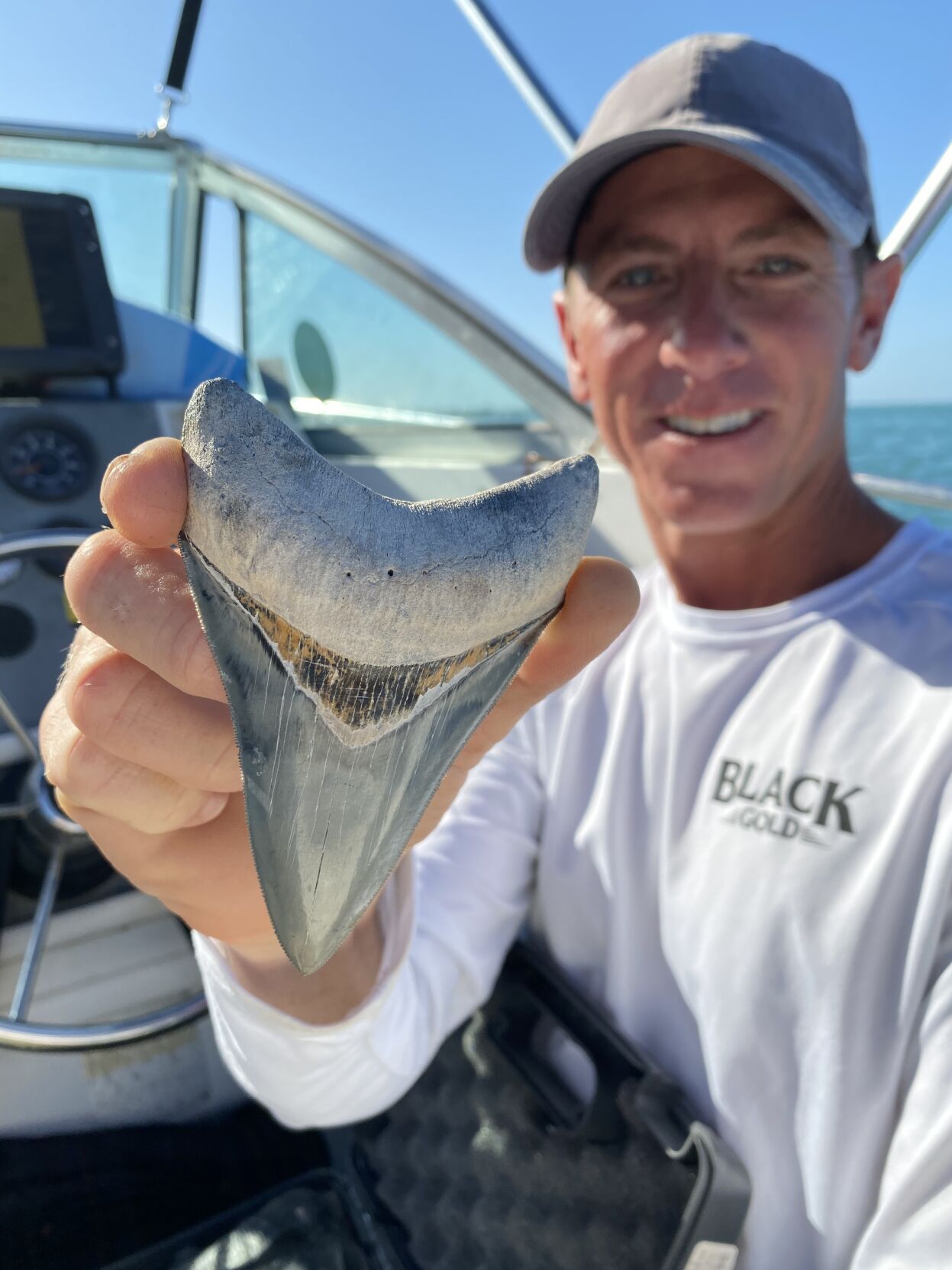 Michael Nastasio shows off one of the shark teeth in his collection. 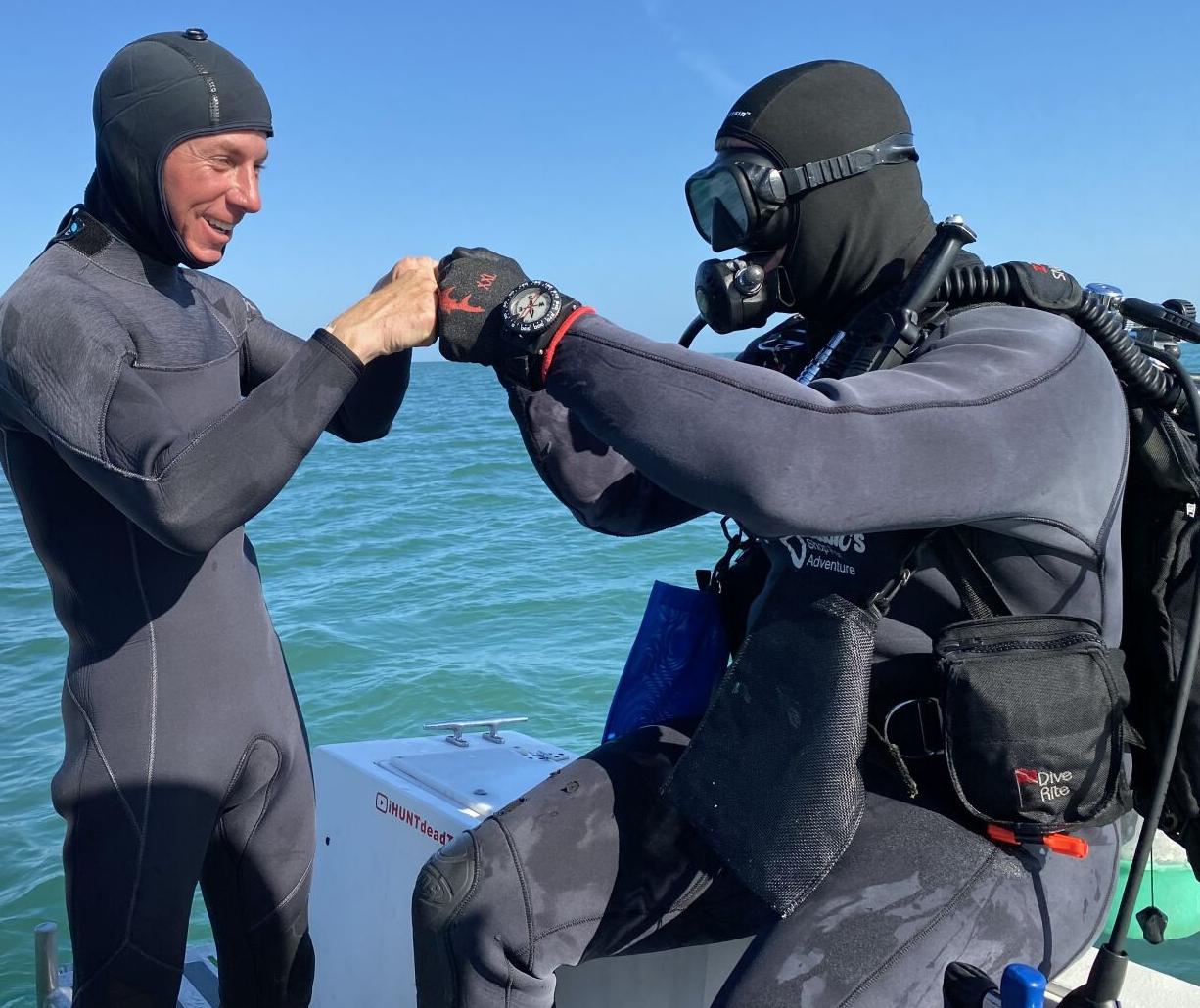 Michael Nastasio and frequent customer Mike Fleischhauer about to dive for shark teeth and other fossils. 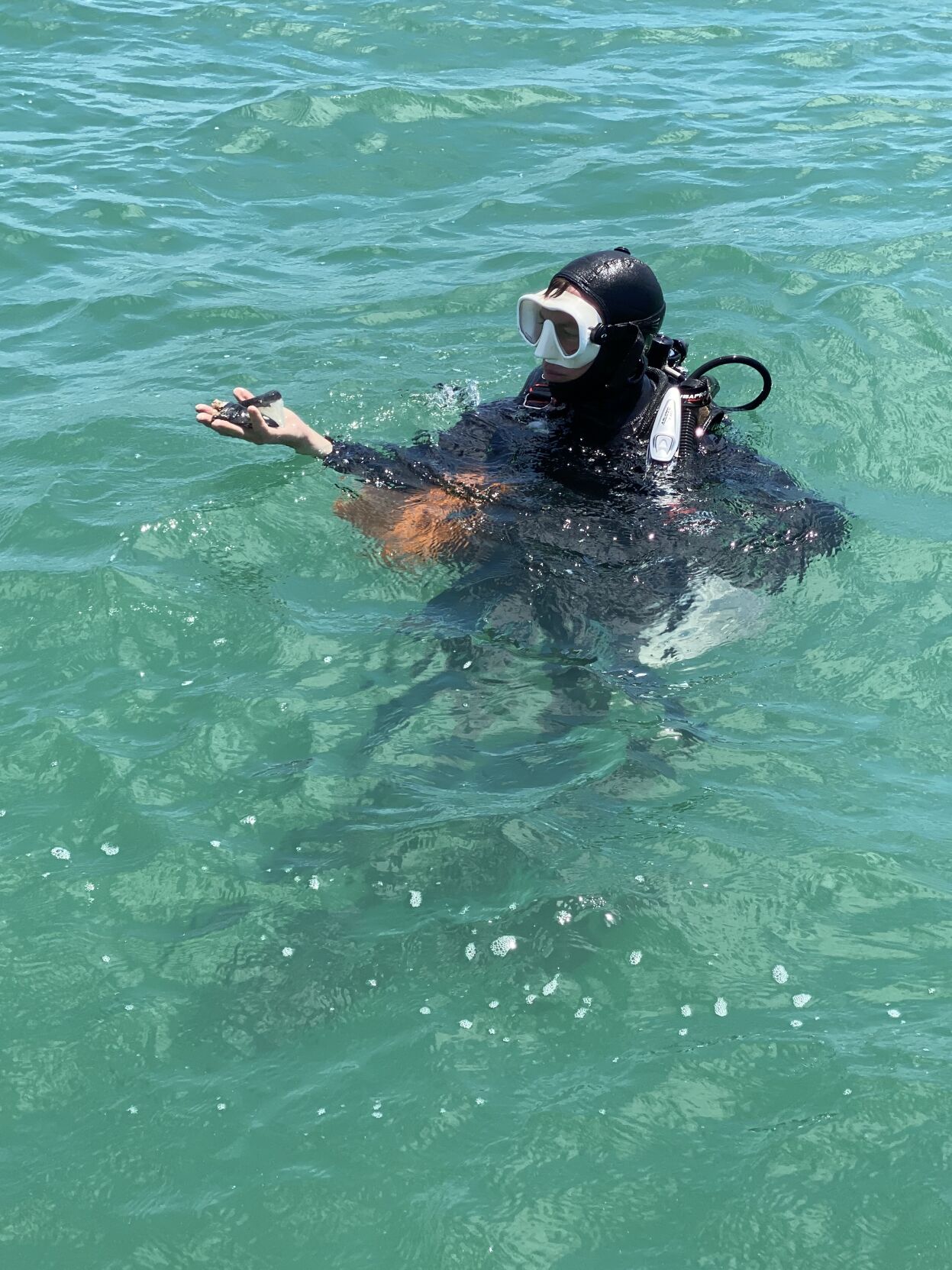 Michael Nastasio takes small groups of customers out to find shark teeth and other fossils off the coast in the Venice area. 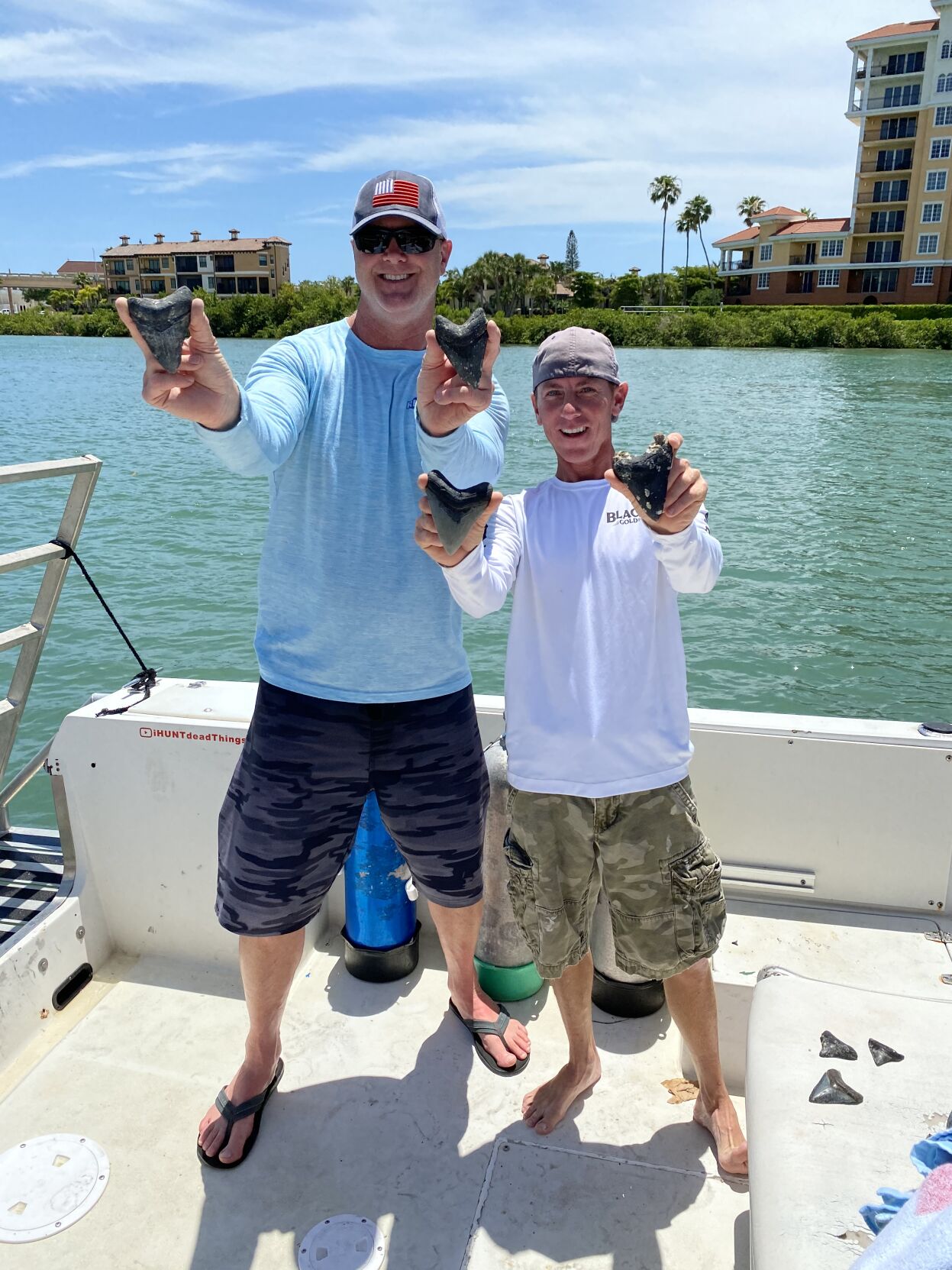 Michael Nastasio and Mike Fleischhauer holding up their finds of the day.

Michael Nastasio shows off one of the shark teeth in his collection.

Michael Nastasio and frequent customer Mike Fleischhauer about to dive for shark teeth and other fossils.

Michael Nastasio takes small groups of customers out to find shark teeth and other fossils off the coast in the Venice area.

Michael Nastasio and Mike Fleischhauer holding up their finds of the day.

VENICE — Perhaps because it’s coined the “Shark Tooth Capital of the World,” the shark tooth business has attracted many visitors to the Venice area.

From sifting for their own shark teeth at the beach to buying souvenirs to take home, visitors are curious about shark fossils.

Shops like Nord Fossils in Englewood sell shark teeth but also offer necklaces made out of the fossils as souvenirs.

Barbara Knodel, owner of Nord Fossils, said she gets some of her shark teeth from people coming into the store and when the Shark Tooth Festival is held.

Sheryl’s Shell Shop in Englewood carries a small variety of shark teeth bought from a local fossil expert. But owner Sheryl Toth said it is not a huge business for the store.

“People are pretty obsessive of finding their own (shark teeth),” Toth said.

Because of the interest in shark teeth and people finding their own, local diving charters keep busy by taking customers out diving for the shark fossils.

Michael Nastasio, owner of Black Gold Fossil Charters, said he is booked through May and has remained busy since starting his charter in August.

However, running a diving charter was not his first plan.

Originally, Nastasio just wanted to make a profit from finding the fossils and selling them to stores. He said the name “Black Gold” came from his goal of finding shark teeth to sell to local stores while making money off of the typically black teeth.

After being a “shark tooth ninja” for 10 years, Nastasio said he decided to share his secrets with customers and opened his charter business in August.

Those certified in scuba can gain the experience of possibly finding a megalodon shark tooth of up to 5 inches for themselves.

To keep the boat and diving waters from being overcrowded, Nastasio said he likes to take only three people per trip. His customers range from experienced shark tooth divers to first-time hunters.

Repeat customer, Mike Fleischhauer of Clearwater, said he has started his own collection of fossils after going out with Nastasio many times.

“I tell people a positive attitude is key,” Nastasio said.

While Nastasio doesn’t like to guarantee customers will find shark teeth, he said he tells them to expect a high probability of finding a large tooth in the areas he takes them.

The areas Nastasio finds fossils and takes customers remains his secret. He said each diving charter has their own spots to go diving and find fossils, but they never share them with each other.

By moving around from different spots he has logged, it helps to keep the areas a secret from other charters while also not completely depleting one area of good fossils, he said.

Shark teeth are also not the only fossils charters will find while diving. Nastasio said he has a collection of various mammoth, bison and alligator bones.

But shark teeth are the main attraction.

Nastasio and manager of Shark Frenzy, Brittanie Hervas, both said the holy grail for fossil finds would be a megalodon tooth over 6 inches or to find a saber tooth tiger’s tooth.

“They were around, they lived here. We can’t go back in time, but we can see what life was like with the clues they left behind,” Sadler stated on Admiral Farragut Academy’s website.