You are the owner of this article.
Edit Article Add New Article
Login
I want to
Publications
Subscribe
Homes for Sale
Cars for Sale
Jobs
Classifieds
E-Paper
News Archives
Calendar
App
Public Notices
Your Newspapers
Contact Us
1 of 4

Educators march toward the Capital Building in Tallahassee on Monday.

Hand made signs and red shirts were the order of the day at a rally sponsored by the Florida Education Association on Monday, the day before the state legislature convened. 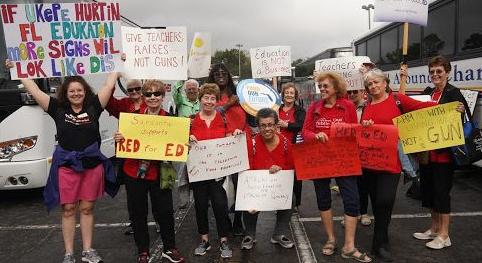 Sarasota County retired educators exit the bus to Tallahassee to march on the Capital. 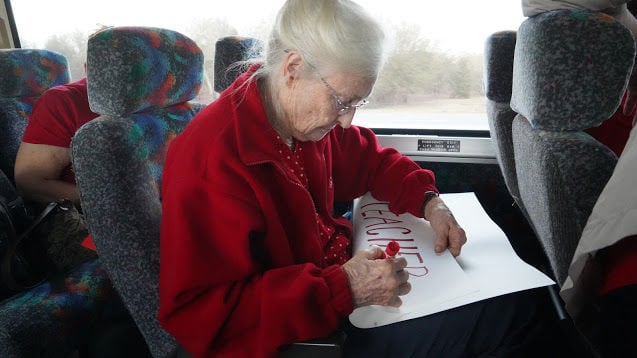 Mary Hasselbring, of Sarasota, makes a poster on the bus en route to Tallahassee. Educators attended a rally to make their case for more education funding.

Educators march toward the Capital Building in Tallahassee on Monday.

Hand made signs and red shirts were the order of the day at a rally sponsored by the Florida Education Association on Monday, the day before the state legislature convened.

Sarasota County retired educators exit the bus to Tallahassee to march on the Capital.

Mary Hasselbring, of Sarasota, makes a poster on the bus en route to Tallahassee. Educators attended a rally to make their case for more education funding.

SARASOTA — Local retired teachers headed to Tallahassee on Monday to join a rally at the Statehouse on Tuesday.

Their message: By any number of measures, Florida’s fiscal commitment to public K-12 education is lacking.

Educators aren't satisfied with the $299 million in increased education funding suggested by Gov. Ron DeSantis, but instead want a $2.2 billion investment.

Martha Karlovetz, who retired to Sarasota County in 2005 after serving nine years as the National Education Association president in Missouri, indicated she was a little disappointed in the turnout of both educators and state lawmakers.

About 25 people turned up for the bus ride to Tallahassee. Karlovetz was hoping for a full bus load of about 50.

She led a local group called Suncoast NEA-Retired educators and parents to show lawmakers they’re united in the effort to increase funding.

"But I think the march was a lot bigger than that," Karlovetz said.

She said education committees were meeting in the Statehouse that day.

"You would have thought they would be out to hear what was said at the march," she said. "Obviously, we're taking a certain point of view," but they could have at least come to hear us out, she said.

Polk County teachers were the heroes of the day, Karlovetz said, for just showing up.

Enough educators announced they were going to attend the march that the Polk County School District found they didn't have enough substitutes.

A memo from the Department of Education's top attorney said their actions constituted an illegal strike and they could be fired. None of them were, so far.

"That just gave them a cause," Karlovetz said. "They went and got some deputies to help staff the classrooms. These are good signs."

The bad news, she said, is lawmakers aren't even looking at the Florida Education Association's $2.2 billion request this year. The governor's proposed $900,000 to increase the base educator salary to $47,500 isn't sufficient, she said.

"We aren't going to achieve better education by bonuses and just raising the base salary, because that doesn't keep the experience teachers in," Karlovetz said. "All you are doing is bringing up the base for beginning teachers. That doesn’t do anything for all those experienced teachers already in the classroom. They need better pay, too.”

“The reason I’m going is because last year a lot of classrooms were manned by long-term subs, and I imagine that must be true today," Logan said. "The low salaries are making it hard to find certified teachers.”

That, she said, hurts the quality of education.

“They didn’t expect to become wealthy by teaching, but they did expect a decent salary, one that allows them to live in the county in which they teach,” she added.

DeSantis’s education agenda is an ambitious one, including higher starting teacher pay, a change in the way bonuses are given to educators, increasing funding of mental health services for students, and improving security in schools.

The bonuses are a bone of contention for educators, however, because they’re one-time funds. Advocates say they amount to a fair wage; educators say it’s another way to keep salaries from growing and allows inflation to chip away at their paychecks.

The Sarasota Classified/Teachers Association, or SC/TA, isn’t affiliated with either of the nationwide school employee associations, the NEA or American Federation of Teachers, who sponsored the rally, but they still work together when it comes to lobbying for more funds.

Longtime SC/TA President Pat Gardner and others from her office also attended the rally.

“Since 2008, they’ve been saying there has been more funding for education, which is true, but when you take into account the increase in cost of living, funding for students, it's a lot less than it was back in 2008,” Gardner said. “The money they pay is buying fewer teachers than it did before. And now we have this catastrophic national teacher shortage."

"That’s unheard of to have that many openings like that in January," she said.

The main reason, Gardner said, is low teacher pay. But the shortage is also due to the increased amount of work expected from educators and fewer colleges churning out future educators, she said.

Like Karlovetz, Gardner said the agenda to continue to push the use of vouchers and charter schools isn’t helping. Rather, it hurts by diverting funds from the regular program, she said.

“School choice only works if its very well funded and open to everyone,” Karlovetz said. “The real goal is to make all schools quality schools. It just seems like the right time to send the message that Florida needs to do a better job of funding public schools.”

“The real goal is to make all schools quality schools. It just seems like the right time to send the message that Florida needs to do a better job of funding public schools.” - Martha Karlovetz, retired educator, former National Education Association president