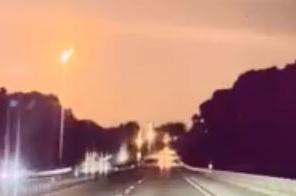 VENICE — The region witnessed a fireball that was seen from as far away as Georgia and South Abaco Island in The Bahamas, with the majority of sightings in South Florida.

More than 200 reports were listed through the American Meteor Society as of Tuesday morning.

The bright breakup of the fireball took place about 10:15 p.m. Monday night, lighting up the sky.

The meteor turned into a meteorite that likely struck the Atlantic Ocean — although what was left was not large. Even as it was lighting up the sky, experts believe it was no larger than a soccer ball.

“To see it as an individual person, it’s probably a once in a lifetime event,” Hankey said. “Most people who report to us have never seen one before.”

But it happens every day, he said. However, they can’t be seen in the daylight and most occur over oceans where humans aren’t living.

“To the Earth itself, it’s not that rare,” Hankey said.

There is early speculation that it may have been a fragment from an asteroid that passed about 12,000 miles from the Earth on Monday. In astronomical terms, that’s not that far.

Asteroid 2021 GW4 was found just a few days ago by astronomers and was being tracked by NASA as a Near Earth Object.

While the investigation is underway, experts are looking into what, if any, 2021 GW4 played into the event.

“This fireball might be a fragment of this asteroid,” Hankey said. “That makes this event a little more interesting to investigators.”

The fireball ends with an explosion after a few seconds, making it a classification of a bowlid, Hankey said — a subclass of fireball.

Hankey, based in Baltimore, was able to recover the last meteorite found in Florida. That 2016 discover was near Lakeland and is called the Osceola meteorite. There won’t be any meteorite this time, though.

“This was clearly over the middle of the Atlantic so there won’t be any recovery to be made,” he said.

Based on the videos and past experience, he said, the meteor was probably “softball to soccer-ball size.”

“It’s going so fast that what you’re seeing is basically the energy,” Hankey said.

Even a fragment of ice going through the atmosphere will leave a bright streak in the sky. It doesn’t take much to cause the phenomenon.

“A grape-size fragment would create a nice fireball,” he said.