The homes at 508 and 504 Venezia Parkway are part of the Venezia Park Historical District. 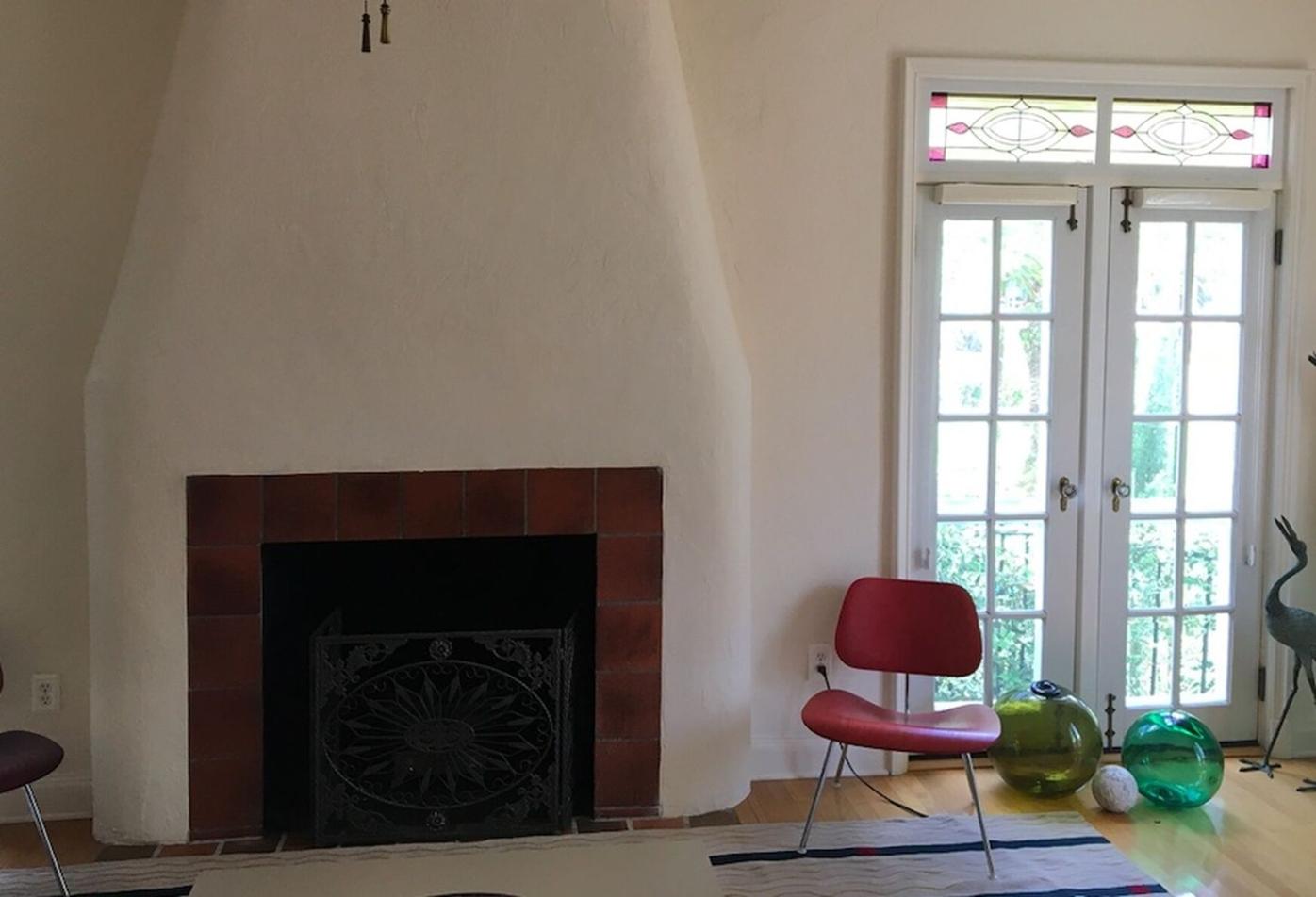 Fireplace at 504 Venezia Parkway: a good job of restoring the original structure. 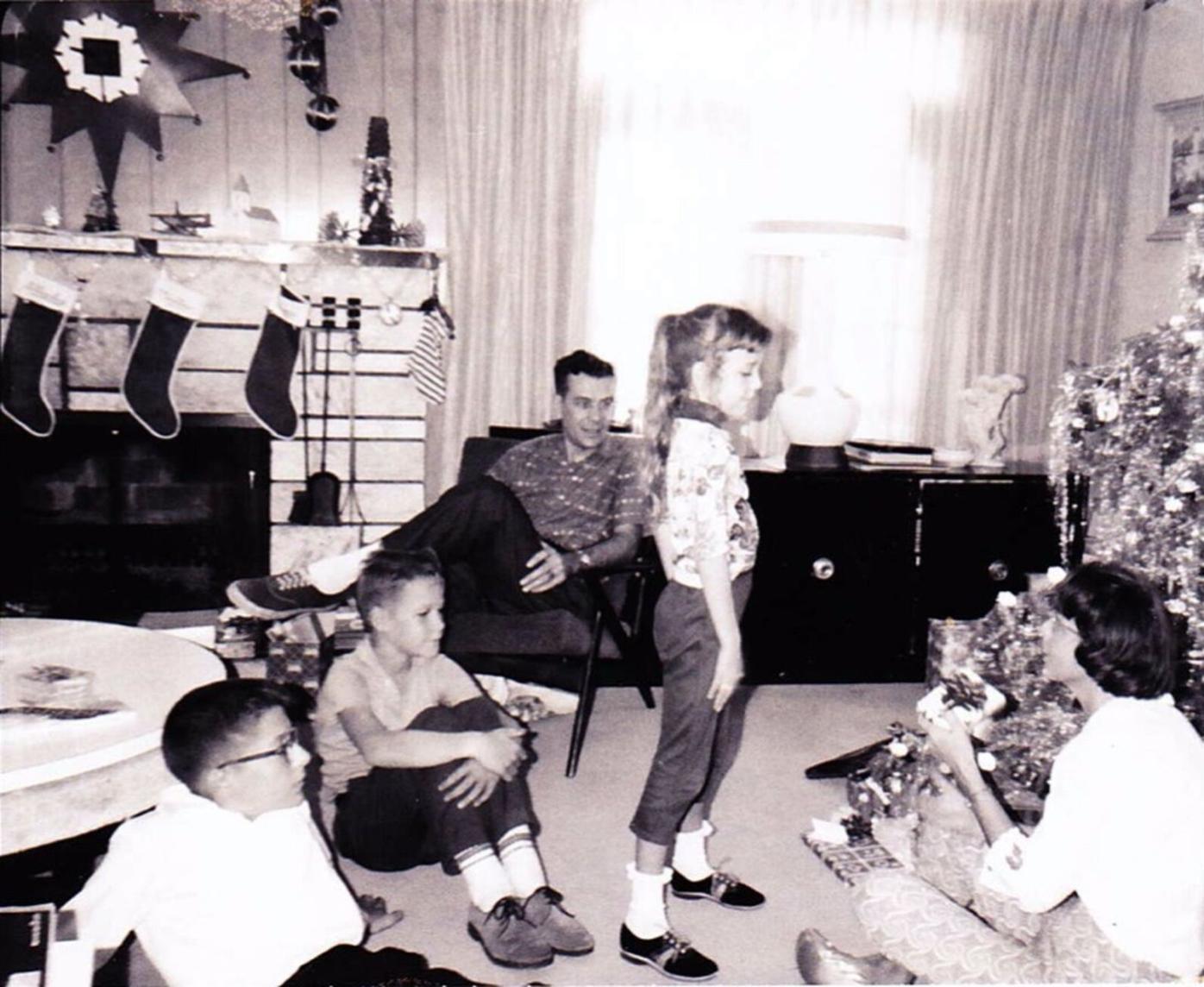 The Thompson Building, c.1947. The current building on that site today houses Patchington. 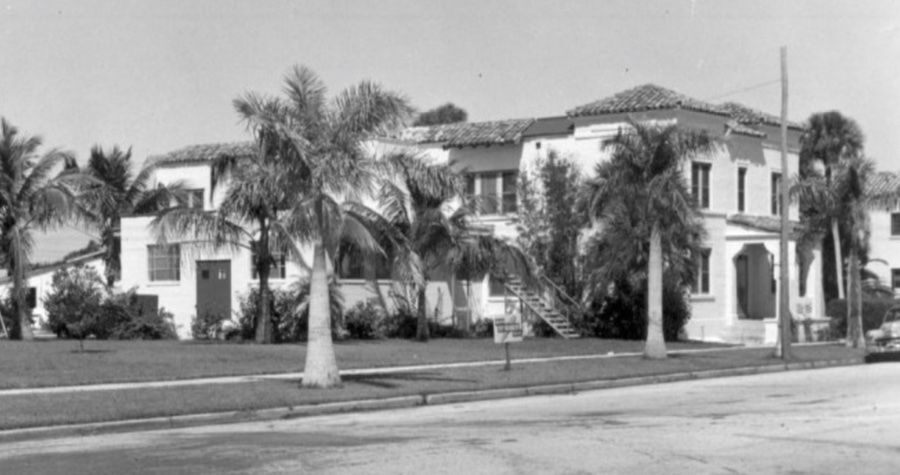 First home of the Venice Hospital, in a refitted 1926 Worrell apartment building, today’s hospital is on this site.

The homes at 508 and 504 Venezia Parkway are part of the Venezia Park Historical District.

Fireplace at 504 Venezia Parkway: a good job of restoring the original structure.

The Thompson Building, c.1947. The current building on that site today houses Patchington.

First home of the Venice Hospital, in a refitted 1926 Worrell apartment building, today’s hospital is on this site.

Architecture is often associated with love. We frequently hear, “I love that house.”

The grand cathedrals of the European Renaissance were expressions of the people’s love for their understanding of God.

An architect’s love of good design results in pleasing buildings.

Today’s column explores how a love of family and community linked four buildings — two that we pass by daily and two that are tucked into a charming historic neighborhood.

This story has its beginnings after the marriage of an enthusiastic young doctor-to-be, Talmadge Thompson, to a gracious young woman named Carolyn Seviour. Once Talmadge received his MD from the University of Maryland, the couple found its way to Venice in 1943.

With no house to yet call home permanently, they stayed in a small house on San Marco Drive the better part of a year until they found their perfect place in 1944: a majestic house at 504 Venezia Parkway. It had been built in 1926 for a member of the Brotherhood of Locomotive Engineers (BLE), the group that purchased the Nolen plan from Dr. Fred Albee with the intent to sell the future city as an ideal retirement community.\

In the opening photo of the two houses in the Venezia Park District the focal point of the larger house is a grand chimney centered on the primary façade, similar to several other stately homes in Venice including one at 320 Ponce de Leon.

As with many of the Nolen-era homes, the primary façade has mirror symmetry on either side of the chimney, with the entry as an asymmetric element to the side. In this case, the chimney narrows half-way up to give a slight asymmetry. The composition of the façade has two secondary focal points – the round tile on the upper chimney and the entry door with its finely-detailed surround. As with all good design, the architectural elements pull one’s eye gently around the façade.

A fireplace on the inside is typical of houses in the late 19th and early 20th centuries, having become the center of warmth and a gathering location for families in the evenings. (Before that, the large cooking/heating fire chamber in the kitchen had been the more functional heat source.) The prominent chimney was thus an outward sign of a warm family gathering place. I suspect that the current simple design, shown in the photo here, is close to the original. The house next door at 508 Venezia Pkwy. (which I’ll discuss shortly) has a similar fireplace structure. The stained glass in the right of the photo, over the front window, was not original to the house, but was apparently added by the Thompsons.

As an architecture fan, the background of the next photo speaks volumes to me. This was taken in the living room of 504 Venezia Parkway on Christmas 1962 or 1963. The fireplace is at the center of the family gathering, even though there isn’t a fire at this moment. Note that the fireplace has been completely re-done in a 1960’s-period fashion: a flagstone fireplace surround and wood paneling on the wall above. This was in the era of mid-century modern architecture, as represented in our area by the well-known Sarasota School of Architecture, with a few prime examples right here in Venice. It seems that the concept of modernizing enveloped a feature that really should have remained true to the original 1926 design. Subsequent owners of the larger house have returned the fireplace back to the 1926 architectural style.

The Thompsons had three children between 1949 and 1954: Stanley, Martin, and Barbara. Stanley is still living in Venice. Their family life was an interesting one, with activities such as plane trips in their Cessna with both Talmadge and Carolyn serving as pilots, Boy-Scout activities, and Christmas celebrations as shown in the photo depicting a holiday celebration.

In the opening photo, the house on the left is at 508 Venezia Parkway; it was also built for a member of the BLE. One very important feature shown in that photo is the distinct difference between the two houses. In fact, every house built in the late 1920’s in Venice is unique. Each one was architect-designed, or at least architect-approved, as all houses built in that period had to pass muster with Walker and Gillette in New York City, the supervising architects for the John Nolen plan. This makes for a much more natural environment than “cookie-cutter” developments. One house is one story and the other house is two stories. One has a visible entry and the other’s is at a right angle to the façade.

The house at 508 Venezia Parkway is in itself an excellent example of pleasing design and interesting details. The entry is introduced by a patio with low walls and rich tile inserts. The window on the wide prominent front wall has shutters to give character while other windows have no shutters. Each window does, though, have a small 4-inch extension over it to direct rainwater off the window openings. This was especially useful since houses in 1926 had no air conditioning except open windows. This feature may be found on many other houses of this era in Venice.

In the 1950’s, Warren and Mabel Seviour, the parents of Carolyn Thompson, bought 508 Venezia Parkway. When Mabel passed, their recently-retired daughter, Barbara Eicholtz, moved in to help her 92-year-old dad. The pair of houses thus comprised a family compound for many years.

These are two of the four buildings linked by love in Venice. The other two are related to Dr. Thompson’s career as the first practicing MD in post-1930s Venice: his office and the old Venice hospital.

Health care in Venice in the early days was sketchy at best. Dr. Fred Albee established a medical center in 1933 which touted the “health benefits” of ultraviolet radiation from the sun. The outbreak of WWII saw that facility become a military hospital which ceased operation in 1945 after the death of Dr. Albee. When it was finally demolished in the 1950s it was replaced by what is today the downtown Venice post office.

After 1940, the first doctor to establish a practice in Venice was Talmadge Thompson. His first office was at Venice and Nokomis Avenues which he opened in 1944. After that, his office was on the second floor of the original Venice-Nokomis Bank and Trust building at Venice and Nassau Avenues. He soon discovered that some of his patients had trouble negotiating the stairs, so he decided that he needed a dedicated, one-story building for his office.

Thompson chose the northeast corner of Venice and Nokomis Avenues. The surprise here is that the builder was Warren Seviour, Carolyn Thompson’s father, who came down from Maryland specifically to build the office. The Seviours lived with the Thompsons during the construction. The family has a photo of Warren’s taking a break from construction, drinking a milkshake that Carolyn had brought him.

The style of the building is fairly rudimentary, but there was a nod to some other Venice architecture: the southwest and southeast corners have quoins, alternating large corner stones. While the southwest quoin has now been replaced by a corner entry alcove, it’s been replicated as the alcove frame, although it has fallen prey to a non-Venice Historical Precedent (VHP) mis-step: painting such features very dark so they stand out and draw attention away from the building as a whole. The same is now true for the east quoin and other doorway frame quoins.

The glass-block windows (at the near south corner and surrounding the entry) were a popular building material in the 1930’s and 1940’s. They provided privacy and light, which were especially suitable for a doctor’s office. The east end of the building housed a barber shop and a beauty salon. Dr. Thompson moved into his new office in late 1947 and stayed there until he retired in 1982. It now houses Patchington and other stores.

By 1950, there was no functioning local hospital and the traumatic emergency trip of one of O.W. Caspersen’s grandnieces to the Sarasota Hospital convinced him to initiate a fund for a hospital in Venice. (Caspersen was an early promoter of Venice and has a beach named after him.) Although the population of Venice in 1950 was only 863, funding was successful, and in October 1950, the South Sarasota County Memorial Hospital was chartered having Dr. Talmadge Thompson as its President.

The hospital opened in the former Worrell apartment building, built in 1926, the large two-story building in the last photo. It sat right about in the center of where the hospital is currently located.

The architecture of the building was a good example of John Nolen-era apartment buildings, several of which survive today as active apartment buildings on South Armada Road and on Menendez Street. The design is simple with elegant embellishment at openings, as in the entry that can be seen in this photo. Note that arches were not de rigueur in Nolen’s Venice plan as much as was façade symmetry.

In 1957, an addition to the south of this building was added, tripling the bed capacity of the hospital. This addition still stands; the original building was eventually replaced by the current multi-story wing. Construction and design of the addition were in the heyday of the aforementioned Sarasota School of Architecture’s Bauhaus-influenced super-simple design era, and the hospital addition tried to follow suit. In hindsight, it might have been better for the overall architectural vision of the building to have continued the theme of the original Worrell apartment. In the 1950’s and 1960’s, though, a “new is better” mindset caused a cultural and architectural blindness that our community is still battling today.

A prominent part of the 1957 hospital renovation is a large rectangle of flagstone, which remains today, as the focal point of its façade. This is interesting, because as can be seen in the photo of the Thompson’s living room from the early 1960’s, this same material was used to “modernize” the 1920’s fireplace.

Hopefully, these examples can be a lesson to value the good architecture of the past and not to default to a current design fad. In addition to the physical outward appearance, a great deal of loving support has created the gracious architecture of our charming historic town.

The views expressed herein are solely the personal views of the author and are not intended to represent the views of the city of Venice or the city’s Architectural Review Board. The author may be contacted at rlmvenice@gmail.com.