Parents gather to talk about the Sarasota County School Board temporary mask mandate. 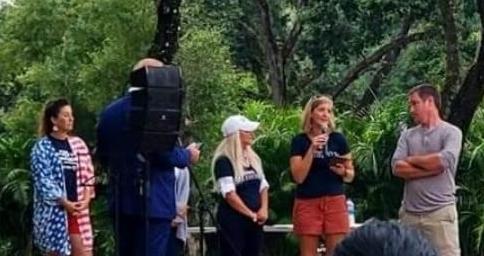 Members of Moms for Liberty talk as Englewood Elementary School father Chad Dion, at right, listens during the Saturday parent meeting in Venice.

Parents gather to talk about the Sarasota County School Board temporary mask mandate.

Members of Moms for Liberty talk as Englewood Elementary School father Chad Dion, at right, listens during the Saturday parent meeting in Venice.

"The goal is to get into the door. (They can) wear the mask until 10 o'clock. At 10 o'clock, everybody takes their masks off, it has to be mask noncompliance. If we all stick together then they (principals) can't enforce any kind of rules." - Alexis Spiegelman, Moms for Liberty

VENICE — Hundreds of parents met in Venice over the weekend to develop strategies to protest Sarasota County School Board’s temporary mandatory mask mandate on Monday — the first day the district plans to enforce the new rules.

In his ruling, Cooper said there are plenty of examples where the rights of one are balanced against the rights of a community, noting the right of adults to drink alcohol, but not drive drunk; and the right of free speech, but not to yell “fire” in a crowded theater.

“We don’t have that right, because exercising the right in that way is harmful or potentially harmful to other people,” Cooper said.

Spiegelman said despite the judge’s ruling, she’s confident it will be appealed.

“It does not change anything,” she said.

Her group plans to challenge the mandate early in the day.

“As kids go to school, they will have a mask on hand, but they aren’t going to wear a mask,” Spiegelman said. “The goal is to get into the door ... wear the mask until 10 o’clock. At 10 o’clock, everybody takes their masks off, it has to be mask noncompliance. If we all stick together, then they can’t enforce any kind of rules.”

Sarasota County Schools Superintendent Brennan Asplen sent a message late Friday to district parents, teachers and students. It was all about Monday and the ongoing fight against COVID-19.

“Any student not wearing a face mask — without a medical exception on-file — will be considered out of compliance with this policy,” he said. “If a student declines to wear a face mask, their parent/guardian will be called to pick them up from school. Our children need to be in school — please help us keep them actively engaged in their education in a constructive, supportive climate.”

He said about 3,000 students and school employees have already been out of school and work for “isolation and quarantining.”

But Spiegelman said parents should speak to their children about what’s going on in America. She said this is not a “vax versus no vax or a mask versus no mask issue.”

“There are times in our lives when it’s right to take a stand, and this is one of those times,” she said.

Spiegelman told the crowd to guide them in the “right direction” and “how to take a righteous stand.”

“You have to coach them that they need to peacefully not comply, say ‘No, I have a right to be here.’ I want an education, my parents told me I don’t have to wear that, you’re not my parents. No I don’t have to leave, and I’m not doing anything wrong. I’m not going to go anywhere.’”

An Englewood-based church is calling for prayers as, it says, “multitudes” of parents are sending their children to schools without masks on Monday to challenge those three School Board members.

The mandate can end if the positivity rate falls to 8% in the county for three days in a row. As of Thursday, it was 15.42% with a 14-day range of 15.35%, according to Sarasota County Department of Health.

“Any student not wearing a face mask — without a medical exception on-file — will be considered out of compliance with this policy...If a student declines to wear a face mask, their parent/guardian will be called to pick them up from school. Our children need to be in school — please help us keep them actively engaged in their education in a constructive, supportive climate.” -

Still, Spiegelman said, they “needed to capitalize on this moment.”

“Every student should have their cellphone on hand and just start streaming and you just stand your sacred ground,” she said. “The key for parents is to stay on public property and be unified in our message. They are going to call you and tell you need to pick up your children. Tell them we’ll be there and not go pick up your children because they need to realize this is untenable. They cannot continue this policy. We just need to overwhelm the system. This is now or never for America.”

On Sunday, Spiegelman wrote on her social media page that members of Moms For Liberty needed to “keep people with bad intentions” out of the group.

“We need to keep in mind that they will try to see what we are planning. It is to our benefit to share information with trusted individuals ONLY,” she wrote. “If someone in your group gives you a check in your spirit, please follow your instincts. Please let us know if anyone in your group begins making strange suggestions or saying things that just don’t sit right.”

She asked people to send “documentation of the event so we can look into it” to member Jimmy Cirillo.

Cirillo did not respond to questions Sunday afternoon.

Spiegelman released a statement Sunday afternoon repeating many of the concepts from the Saturday meeting.

“The bottom line is this: Peaceful noncompliance is an American tradition. The ability to voice one’s own opinion and petition the government for a redress of grievances is a God-given right protected by our First Amendment,” she said.

She compared the situation to the “sacred right to peacefully assemble and to peacefully not comply with injustice,” including “liberating moments” in human history like Rosa Parks, the American Revolution and those marching at the Selma bridge.

“The right of the individual to make governing decisions about their own lives is what makes America the greatest country on earth — Individual Liberty and representative government.”

She said parents are faced with one of the “teachable moments.”

“A hands-on lesson on civil rights, individual liberties, and what makes our Constitutional Republic superior to a straight democracy. Individual liberties matter, and asserting those rights when they are infringed is essential to preserving them,” she wrote.

She called Brown, Goodwin and Edwards “three radical leftists” that have put the administration, educators and superintendent in an “untenable situation.”

She said Moms For Liberty “stand” with teachers, administrators and Asplen.

“This is what happens when those holding public offices forget who they work for and decide to disregard our God-given and Constitutionally-protected rights,” she wrote. “Our rights come from God. Our Constitution serves to protect our inherent fundamental rights.”

It is her hope that “mass” noncompliance happens at 10 a.m.

For parents protesting, she urged them to stay on public property, not to break laws nor be rude, aggressive or make it “about masks.”

“This is about parental rights,” she wrote. “If the school calls you and asks you to pick up your kids ... go at your leisure as this mess is not the fault of families or administrators, this mess is the result of the rouge (sic) majority on board, and they need to fix it.”

They blamed the situation on the School Board members.

“They cannot continue this policy (and they cannot throw off the consequences of their actions onto everyone else — doing so will only cause division in our community),” she wrote in a statement. “Their blatant disregard for our rights has placed us in this situation. We need to overwhelm the system (with our peaceful noncompliance) until our voices are heard. This is a now or never time for America. We need to hold the line.”

She did not answer questions.

Chad Dion, an Englewood Elementary School parent, said teachers, including some in the audience on Saturday, aren’t responsible for the mask mandate.

Dion said the battle isn’t at the school level and asked parents not to become emotional over being called to pick up their child for not wearing a mask.

“When we go to these schools, Monday, Tuesday, next week, next month — however long it takes to win — we cannot get emotional and take it out on the principals, on the custodians, on the teachers, on the resource officers,” he said. “This is not their fault. They didn’t do this. And if we are fighting at that level, we can’t win the battle at the school board, county or even state level.”

Spiegelman agreed, saying “a lot of teachers” would like to protest, but have had their job threatened.

“They (teachers) are kind of in a situation that’s similar to an abusive marriage with the teachers’ unions,” she said. “We can be the catalyst for setting a lot of people free. We need to say ‘You can’t force these things on me. I deserve to do what I want to do and what I feel is best.’”

"You have to coach them that they need to peacefully, not comply, say 'no, I have a right to be here. I want an education, my parents told me I don't have to wear that, you're not my parents. No I don't have to leave and I'm not doing anything wrong. I'm not going to go anywhere."

“(Tell them) they are kicking our kids out, they are not educating our children because of a mask,” he said. “They are putting them on lists … Do not go down the political route. Do not go down the science route. This is not about that. This about a parent’s right to parent their children. That’s it, plain and simple.”

Dion said the School Board could use other means to safeguard students including temperature checks, wiping down common areas, adding the desk shields and social distancing, but haven’t done anything except a mask mandate.

“We need to pressure our School Board members to prove why this is reasonable,” he said. “If they can’t prove them, they are not reasonable. We need emails, calls — flood the system.”

The Moms for Liberty are teaching their children that they have no, responsibility to protect others. The virus is now killing more than one thousand Americans a day. Their irresponsibility is helping the virus perpetuate itself. Masks reduce the spread of the virus, so their fight to prevent them from being worn is helping the virus spread. Shame, on you for your selfishness.

I am horrified these parents are putting teachers in this no win situation. It is the beginning of the school year when students and teachers are just starting to build a relationship of trust. Encouraging your child to behave in this way will totally erode this and depending on how long the parents keep this up it could take months if ever to rebuild it.

Agreed, this is pretty sad. Do the protest on your own time.