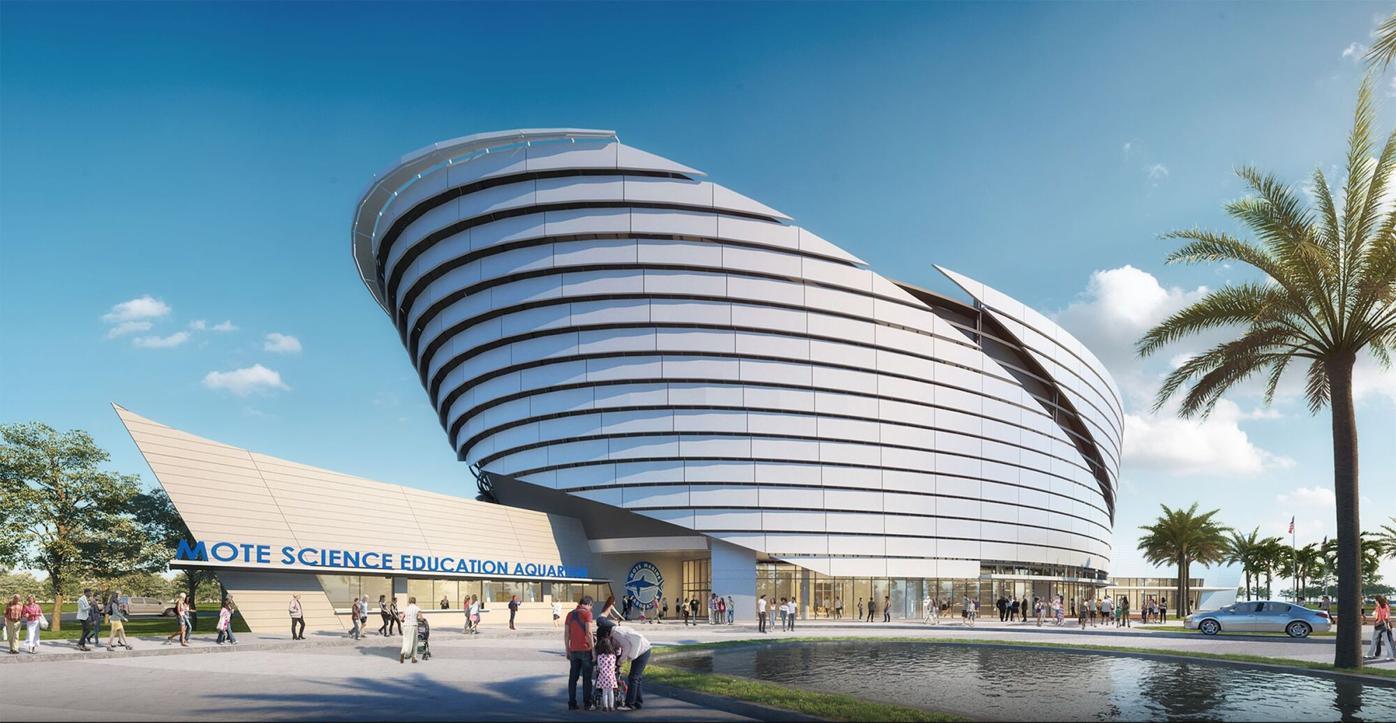 The latest architectural rendering shows Mote Marine Laboratory’s new aquarium, which will be built at Nathan Benderson Park, near the Interstate 75 interchange at University Parkway. 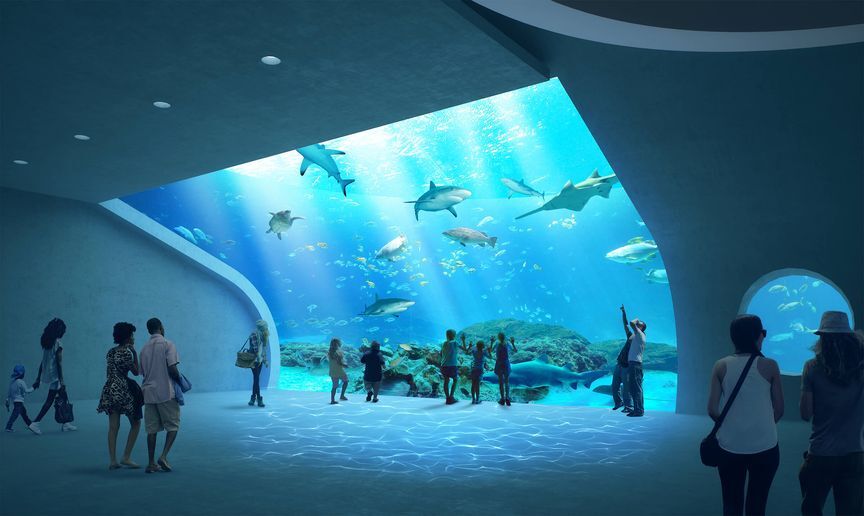 This architectural rendering shows one of the indoor spaces of Mote’s new aquarium to be built at Benderson Park in Sarasota County. 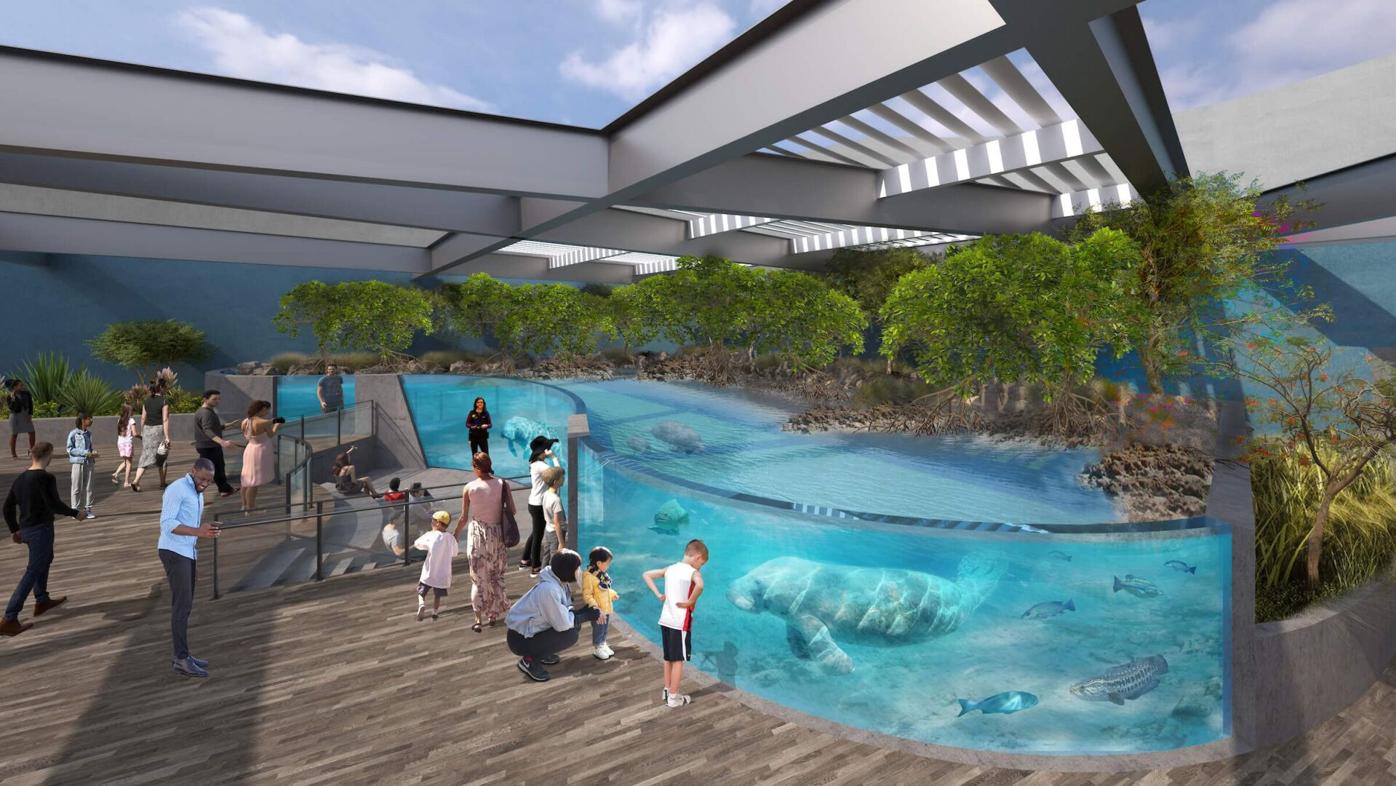 This rendering shows proposed exhibition space at the new Mote Aquarium, which will be built at Benderson Park beginning with ground-breaking in September for what is being considered a visually iconic facility.

The latest architectural rendering shows Mote Marine Laboratory’s new aquarium, which will be built at Nathan Benderson Park, near the Interstate 75 interchange at University Parkway.

This architectural rendering shows one of the indoor spaces of Mote’s new aquarium to be built at Benderson Park in Sarasota County.

This rendering shows proposed exhibition space at the new Mote Aquarium, which will be built at Benderson Park beginning with ground-breaking in September for what is being considered a visually iconic facility.

How does a building achieve icon status?

With $75 million pledged or already in hand, the new $100 million Mote Marine Laboratory and Aquarium being planned for a highly visible site at Benderson Park, just might qualify. Some have already predicted it will be as recognizable as the famed Sydney Opera House.

“Mote SEA will generate significant boost for our regional economy and further support innovative research for the sustainable use and conservation of our oceans, said Mote CEO/President Michael Crosby at a news conference to announce the immanent ground-breaking in September. “But, equally as important, Mote SEA will expand formal STEM (science, technology, engineering and math) education to each and every K-12 student in Sarasota and Manatee County public schools.”

There will be no cost to any of the students.

For those who have been following the progress of this facility, those at the press event saw remastered renderings of the proposed building and learned more about its proposed use as an educational facility for all the students of Sarasota and Manatee counties.

The building will include three STEM teaching labs valued at $21 million to serve all 70,000 K-12 students in the Sarasota and Manatee county region.

Manatee County has contributed $5 million to the public-private project. When built, the facility will support 216 jobs and provide more than $2 million in salaries.

As a tourist draw, the 110,000-square foot facility also is expected to have a major impact on tourism.

“Mote SEA will provide an annual economic impact of nearly $28 million to the state of Florida,” said Mike Moran, chairman of the Sarasota Board of County Commissioners.

Three million people live within a 60-minute drive from Mote SEA (the name of the new facility) and some 43 million cars pass the site annually. Many of those cars belong to the millions of tourists who come annually to this area from all over the world.

Visibility of the new facility compared to that of the existing facility on City Island near St. Armands Circle and Longboat Key is expected to substantially increase the number of visitors to the aquarium and marine science education center

The architect of record for the new facility is TVS Design, which has offices in Tampa, Atlanta, Los Angeles and Shanghai. Past projects have included the Georgia Aquarium and the Nanchang (China) Aquarium plus such iconic buildings as the Jacob Javits center and a recent addition to the Las Vegas Convention Center.

The firm is currently working on projects all over the world including a new multi-level shopping center that will be a first in Chile and a 5-star resort in the Caribbean.

Within the four-story building on the 12-acre site will be hands-on teaching labs, on-site diving programs, scientific demonstrations and nearly 1 million gallons of exhibits with marine life and scientific displays from around the world. The new facility is projected to double the attendance of that at the current aquarium on City Island.

Projected economic impacts to the area include $280 million to the construction industry and $28 million annually from operations.

Once the new aquarium is operational, work will begin to transform the City Island facility into an enhanced International Marine Science, Technology & Innovation Park with expanded facilities for present researchers, science and technology entrepreneurs and their international partners to address threats to the world’s oceans such as Red Tide, pollution and climate change.

“Mote SEA is a legacy project, not only for Mote, but for the region as well,” Moran added. “It will undoubtedly be a defining part of our community now and into the future.”