Patricia Coswell, left, and Leslie Edwards present Nelda Thompson with a seagrape tree. It’s a cutting from a large tree on the Hermitage property. 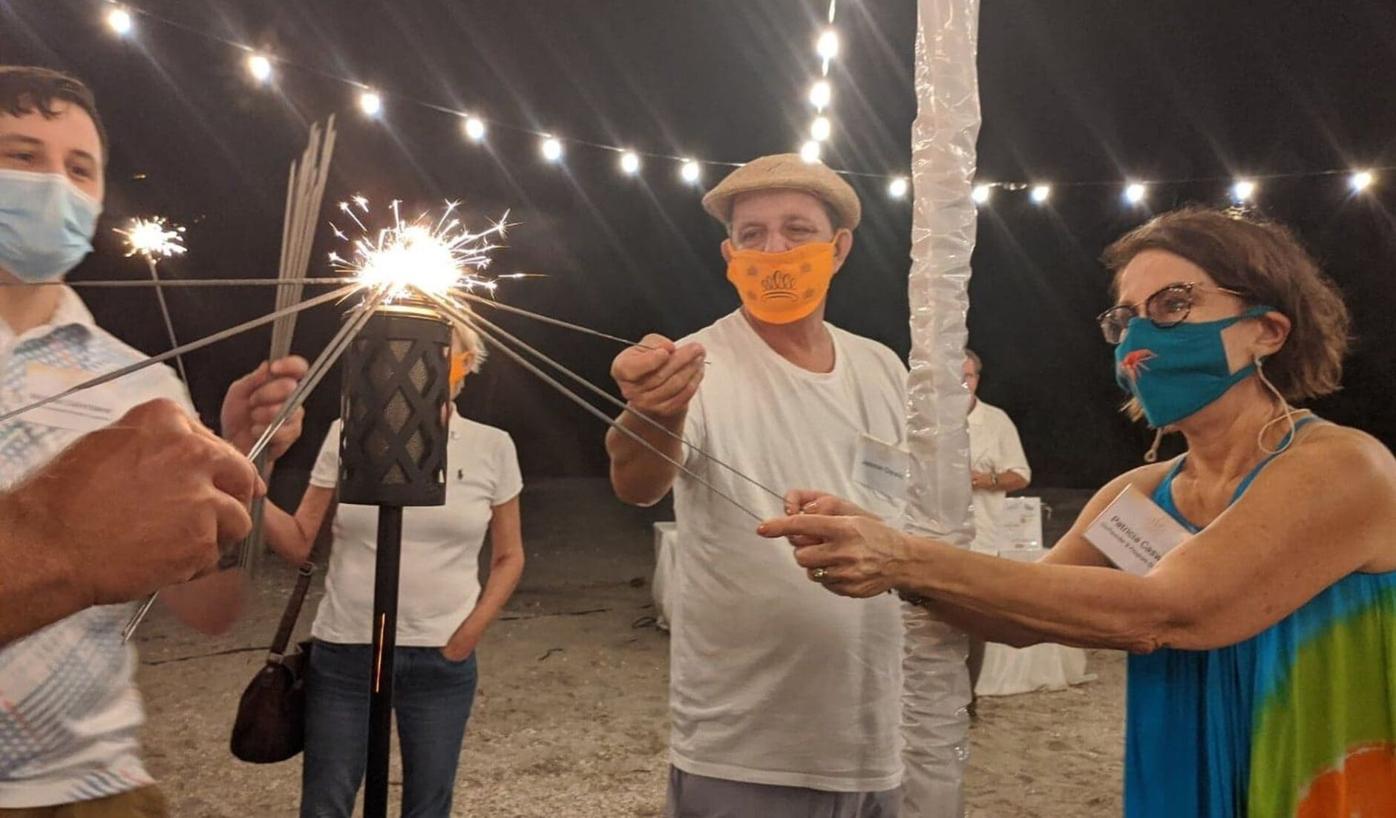 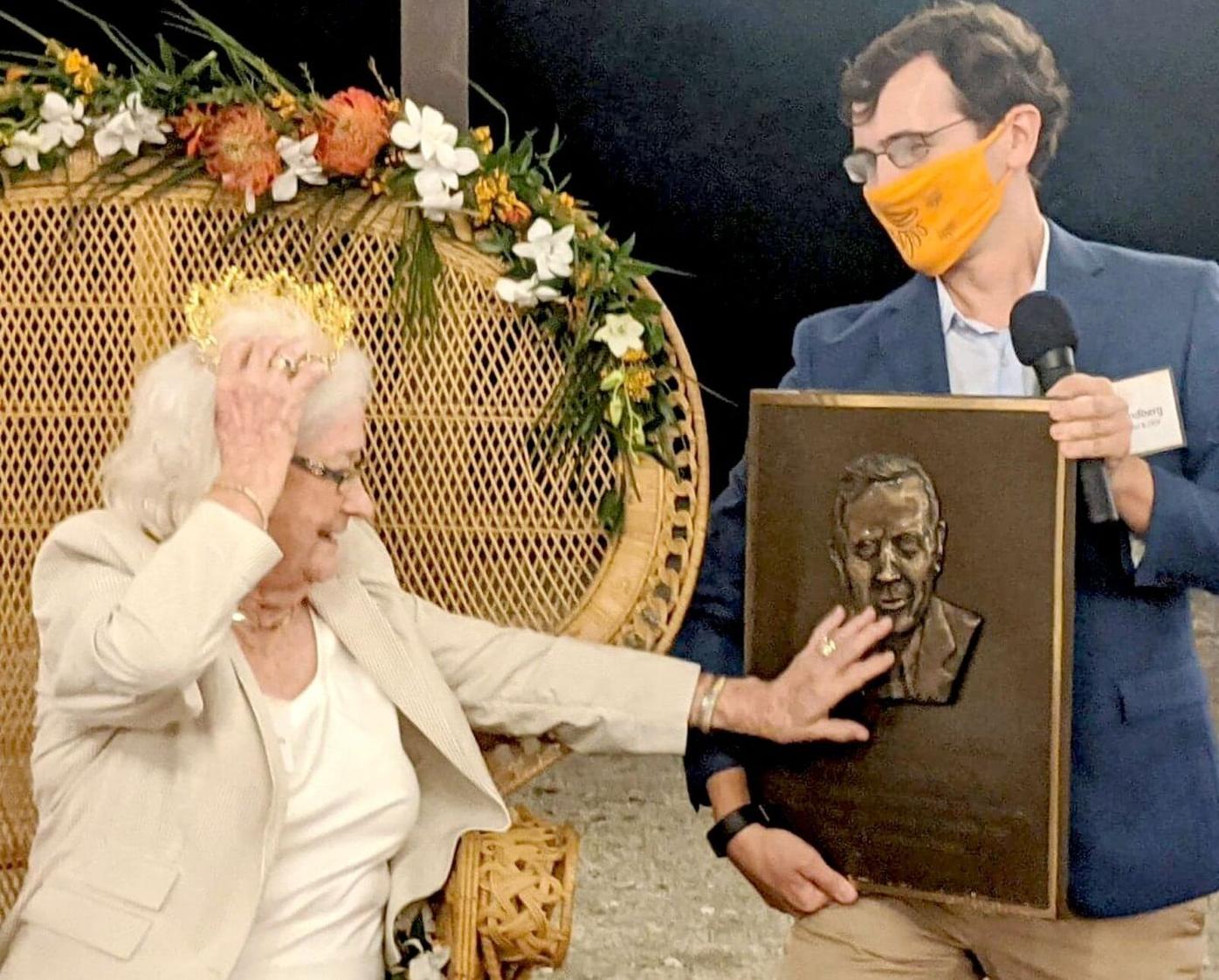 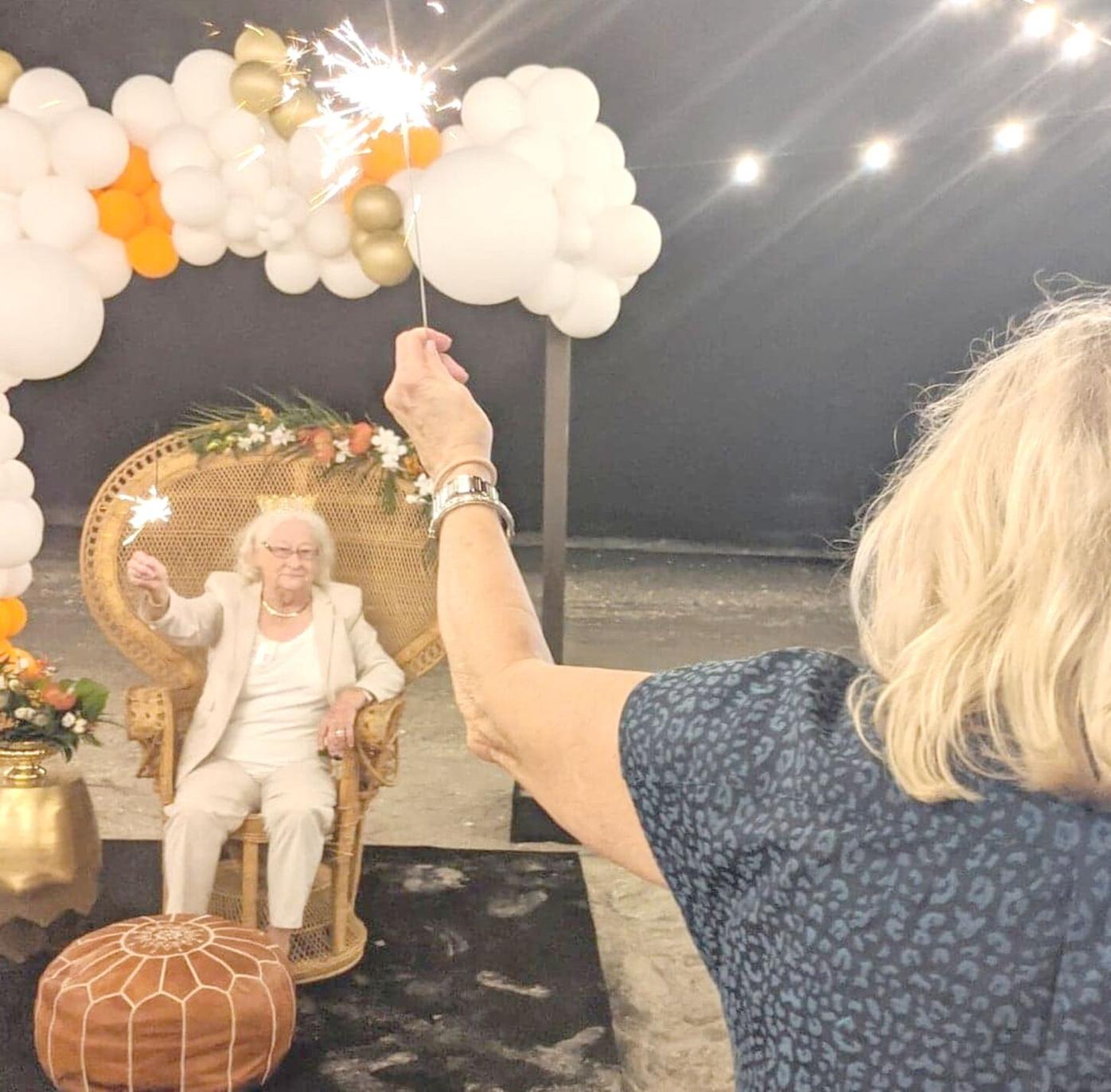 Nelda Thompson waives a sparkler along with her daughter, Jett during the ceremony on Manasota Key Beach. 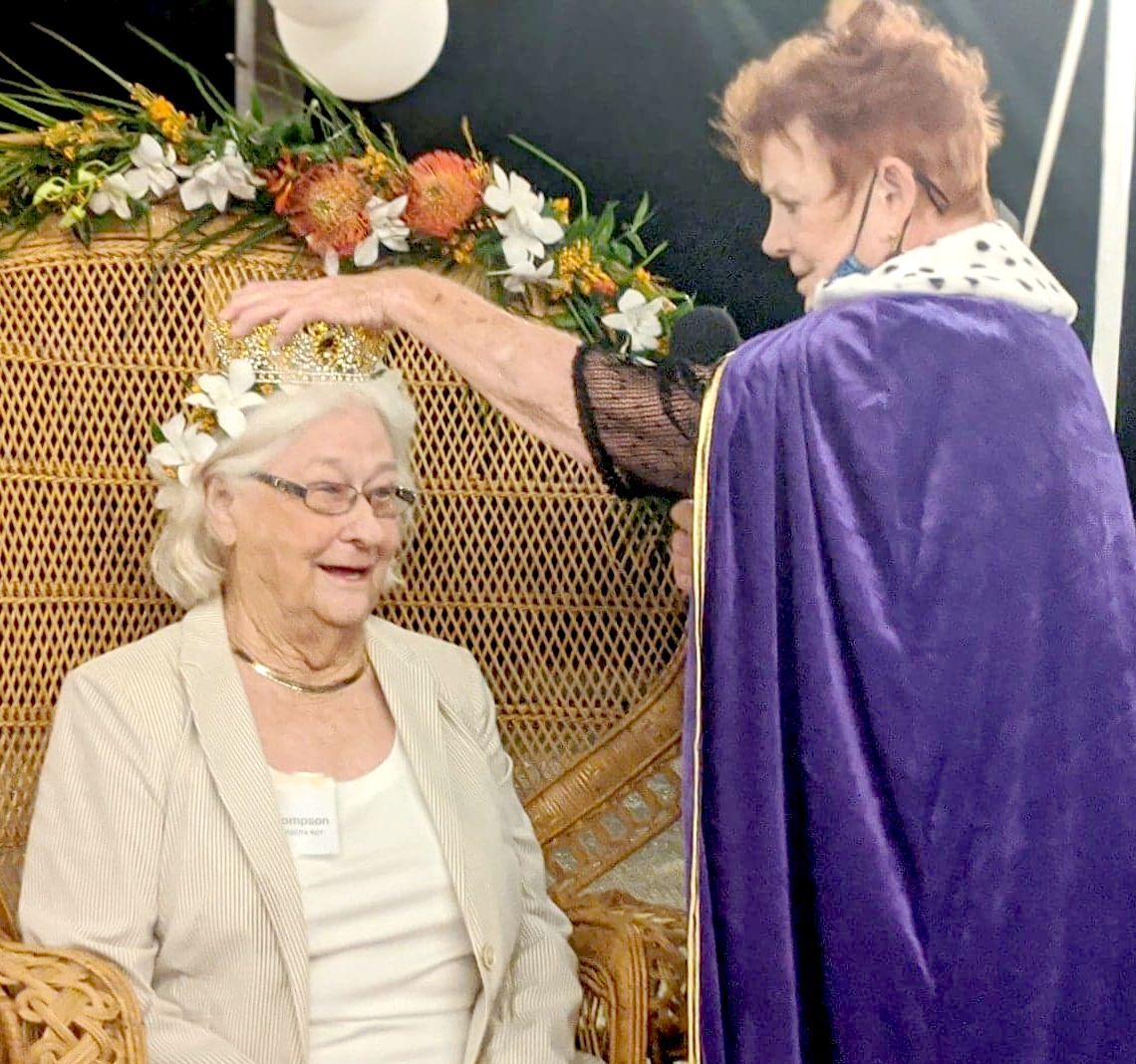 Longtime friend Maryann Casey, a trustee and celebration committee member, puts a crown on Nelda Thompson’s head to start the ceremony fit for a queen. 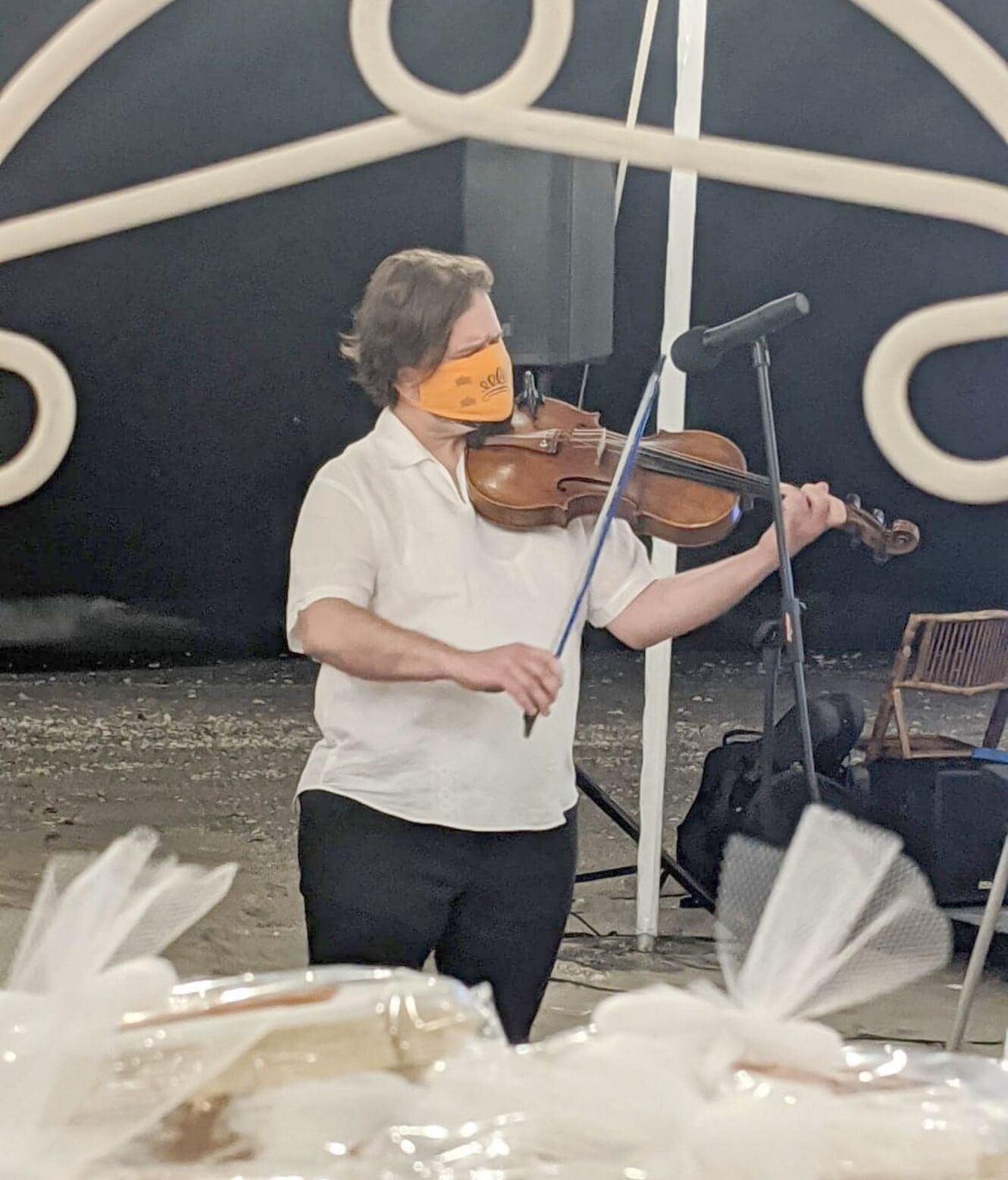 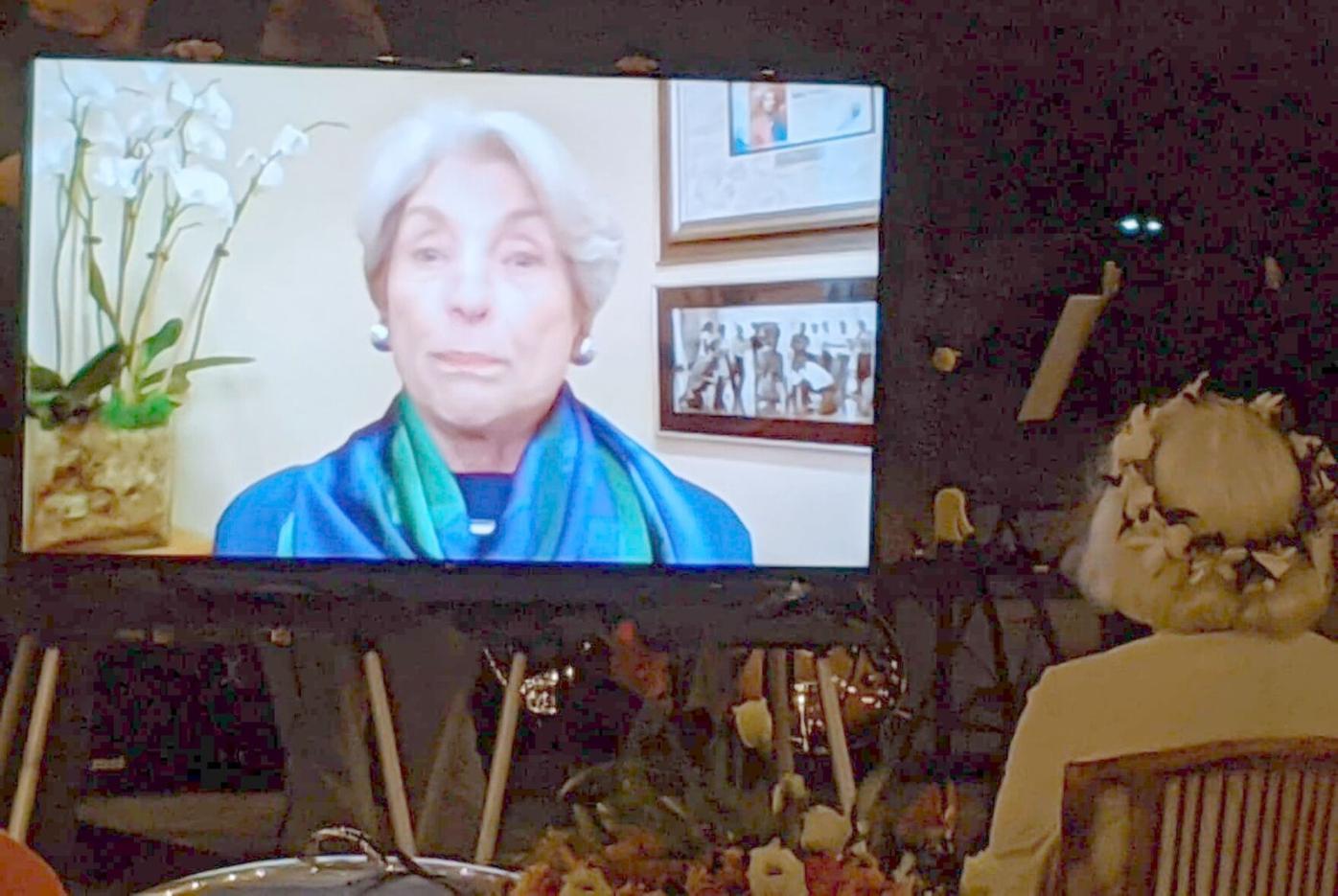 Patricia Coswell, left, and Leslie Edwards present Nelda Thompson with a seagrape tree. It’s a cutting from a large tree on the Hermitage property.

Nelda Thompson waives a sparkler along with her daughter, Jett during the ceremony on Manasota Key Beach.

Longtime friend Maryann Casey, a trustee and celebration committee member, puts a crown on Nelda Thompson’s head to start the ceremony fit for a queen.

MANASOTA KEY — They bowed, they curtsied, they hailed Queen Nelda.

Some of Nelda Thompson’s closest friends gathered outside The Hermitage Artist Retreat on Manasota Beach to honor her and her late husband, Jim.

In the 1990s, the beachfront buildings that now make up The Hermitage were abandoned and had fallen into disrepair. Erosion threatened to destroy much of the complex. Nelda and Jim were among a group of Englewood residents who helped bring the property back to its historic beauty and convert it into a county-owned artist retreat.

Friends seated Queen Nelda on a throne, put a crown upon her head and showed a video filled with loved ones sharing stories about the sometimes feisty 83-year-old.

Known as the Queen of Manasota Key, Thompson, a real estate broker, is famous for pointing her finger and passionately telling it like it is when raising money or making improvements to The Hermitage Artist Retreat.

Her longtime friend and former employer Michael Saunders spoke on the video of Thompson’s kindness, unselfishness and nobleness in saving a piece of Englewood’s history from being demolished years ago.

“When asked for a donation, my husband Jim said if the termites didn’t stop holding hands, it would be a pile of sawdust,” Thompson explained to the crowd on the beach as the Friday night sun set into the Gulf. “It was an eyesore. We helped fix it. We saved history.”

Thompson thanked Tom Dignam and his adult children David Dignam and Leslie Edwards, and others for helping raise money over the years for the Hermitage.

Edwards is the board chair. She helped organize the sold-out Artful Lobster fundraiser Saturday, November 14, 2020 the day after Nelda’s celebration. More than 200 guests, including some who just wanted to drive up, get their lobster and go, came to help raise money for the operation of The Hermitage.

Edwards said Thompson was honored at both events.

For 61-year-old New York artist, Doug Fitch, it was magical sitting on a couch on the beach, noshing on hors d’ oeuvres, while learning about Thompson’s efforts to build The Hermitage into what it is today.

“The first day I came to stay at The Hermitage there was a hurricane,” he said. “But what an experience it is turning out to be for me. I’ve never had anything like this happen to me before.”

Fitch was recommended to stay at The Hermitage by an artist. He is staying there on Manasota Key for free, while he works on his art.

Andy Sandberg, artistic director and CEO of The Hermitage Artist Retreat, introduced artist Ralph Farris, the founding violist and artistic director of the genre-bending string quartet ETHEL. He played a special song for Thompson. He was also the headliner at the 12th annual Artful Lobster Saturday.

Patricia Coswell, co-founder of The Hermitage, joined others as they lit sparklers in the couple’s honor.

Before the ceremony ended, Thompson was presented a potted cutting from the large seagrape tree that’s grown for years since the couple saved the buildings. The tree is now named in the couple’s honor.

Then after all of the pomp and circumstance was over, a mascot alligator holding a Florida Gators flag ran onto the beach and hugged and danced with Thompson. Jim was a big Gators fan and no one forgot about it. There were even custom-made Florida gator cookies in place of scones at the “queen’s” ceremony.

“I loved every minute of it,” she told her fans. “We still have work to do. We bring in top artists, continue to expand and improve the building.”

For more about The Hermitage, 6630 Manasota Key Road, visit hermitageartistretreat.org.