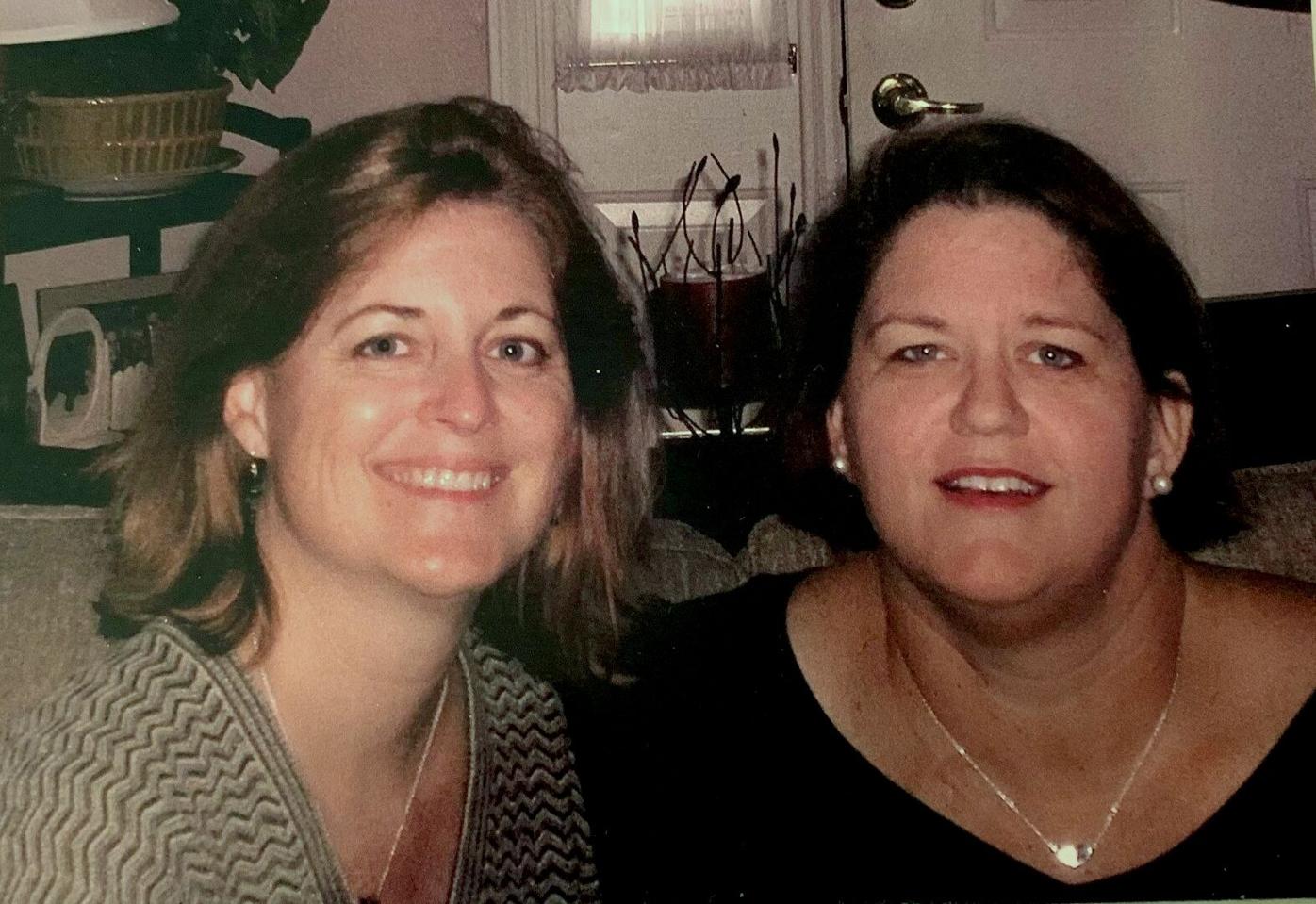 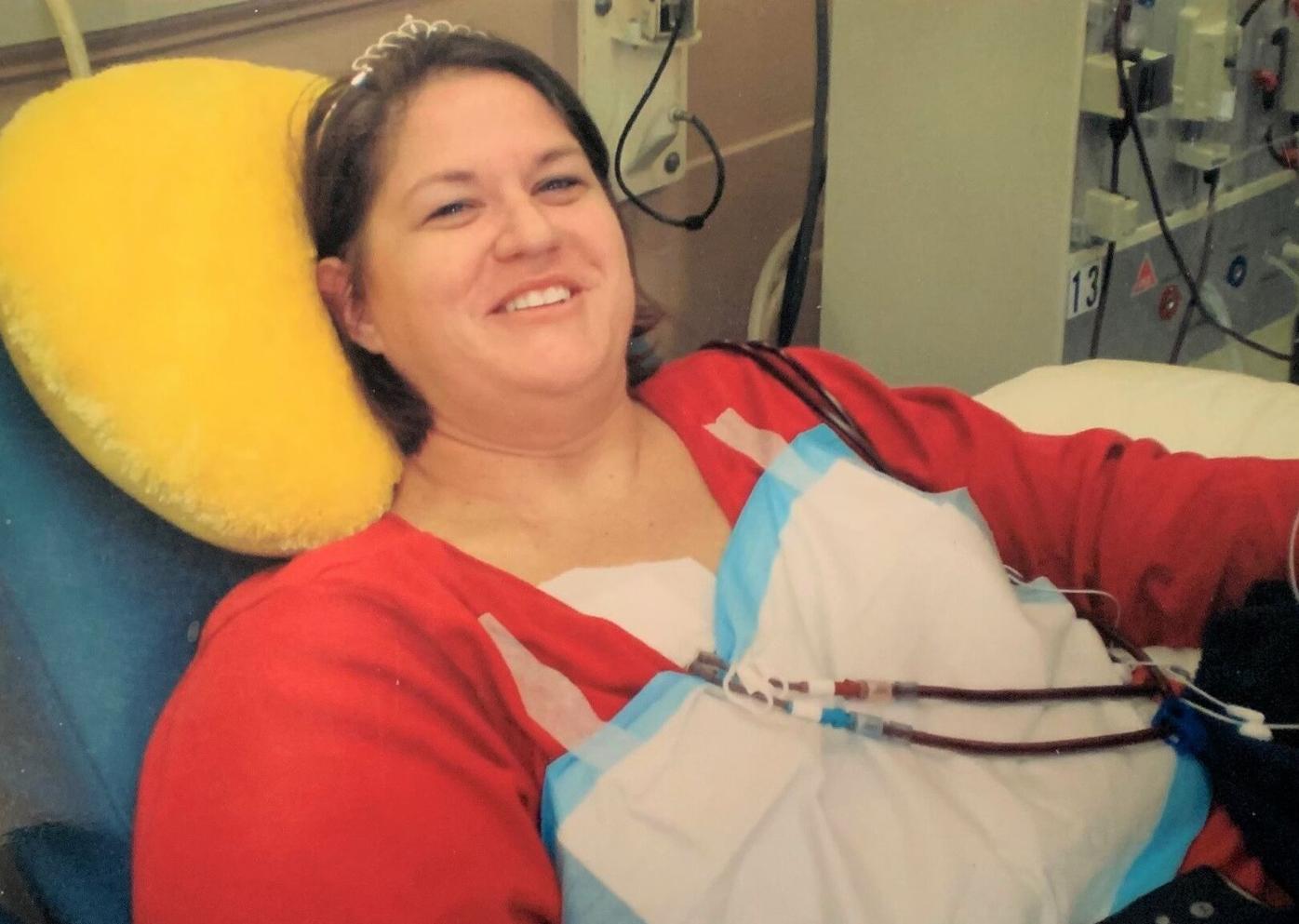 Cheryl Blackburn during dialysis. A kidney donated by a childhood friend ended her need for regular treatments. 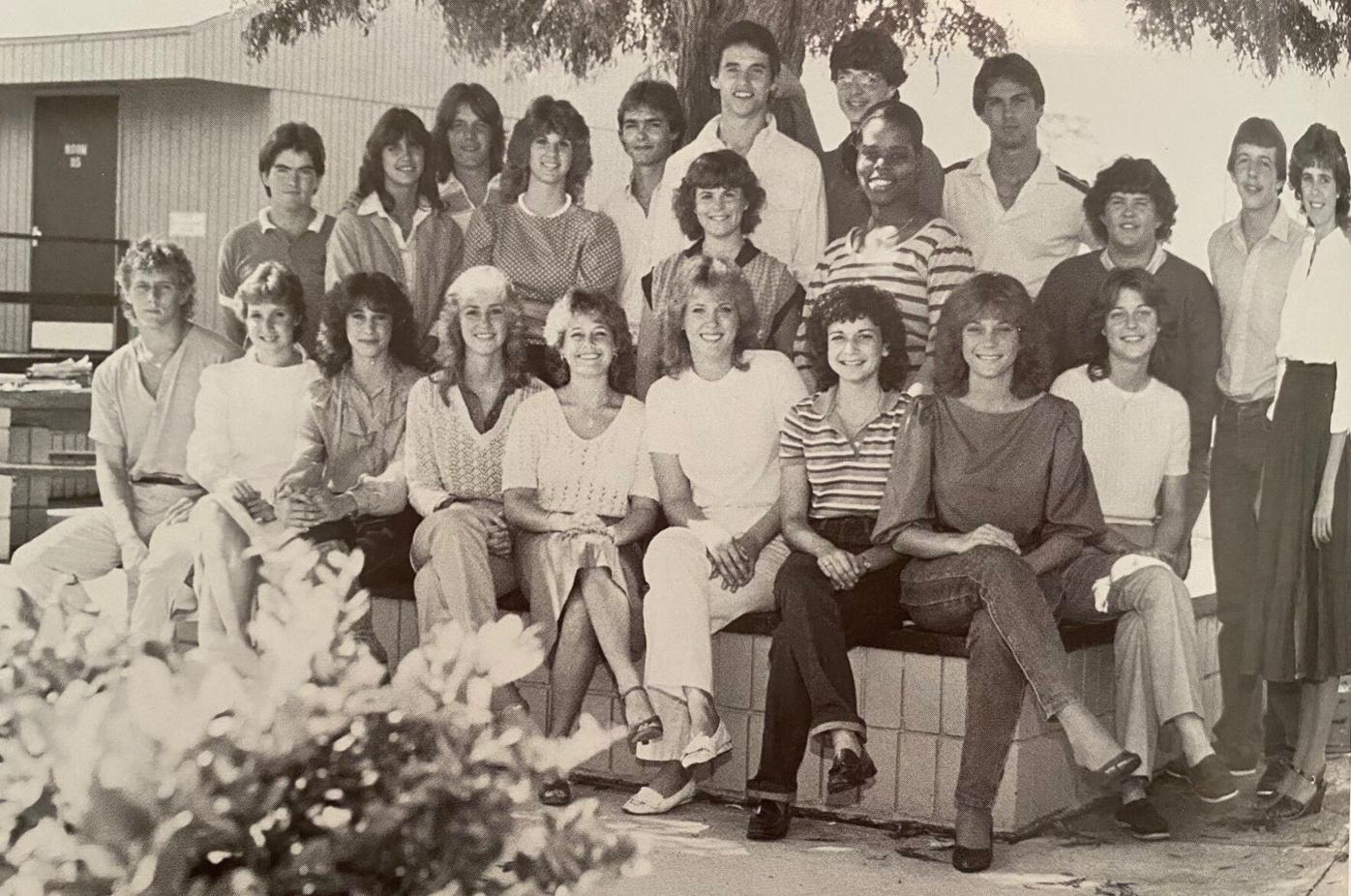 In this photo of their senior class at Venice High School, Theresa Levering is seated at far right and Cheryl Blackburn is standing behind her. 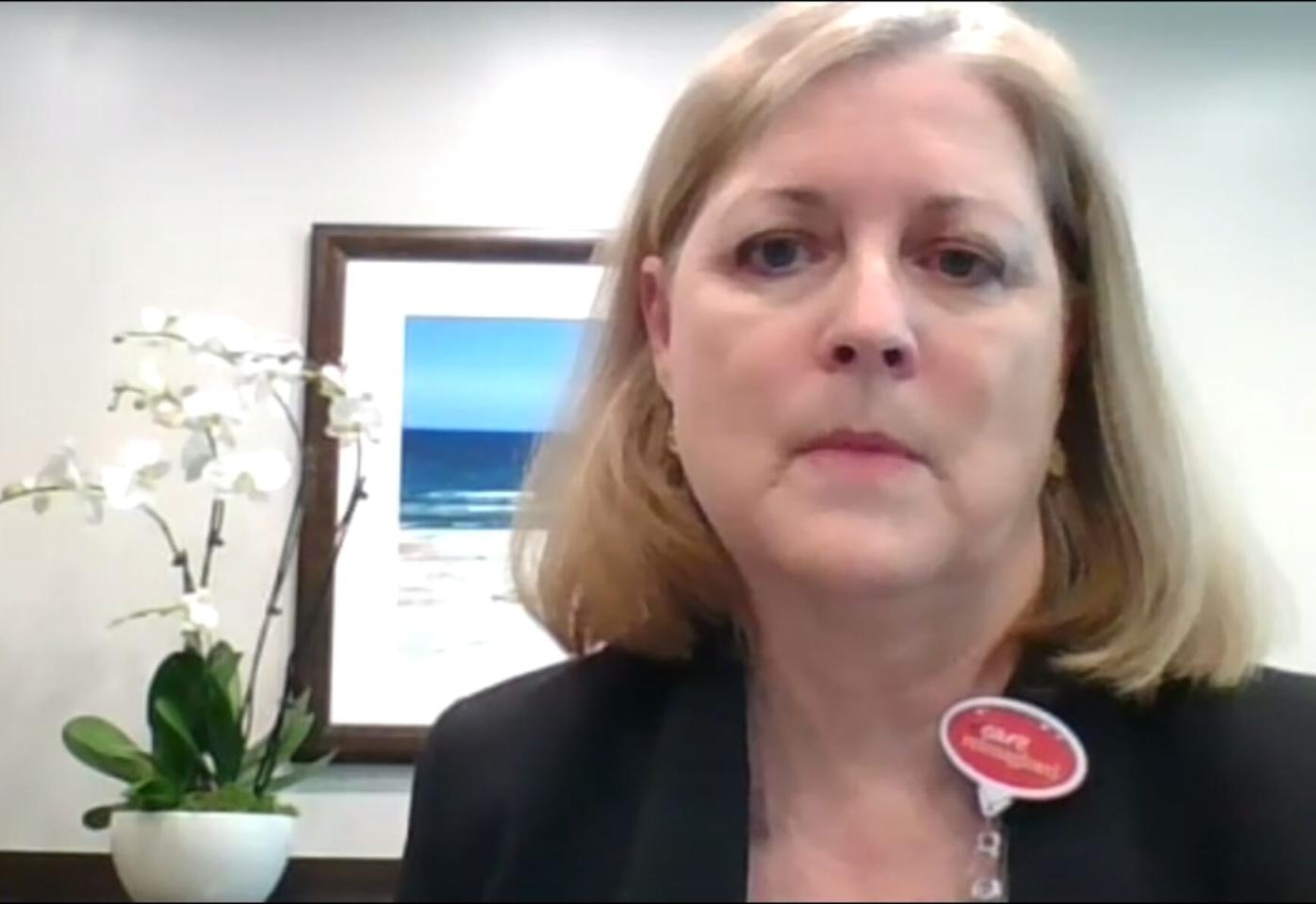 Theresa Levering asked that the story of her kidney donation to her childhood friend Cheryl Blackburn stress the need for more people to make living donations of kidneys and liver tissue. 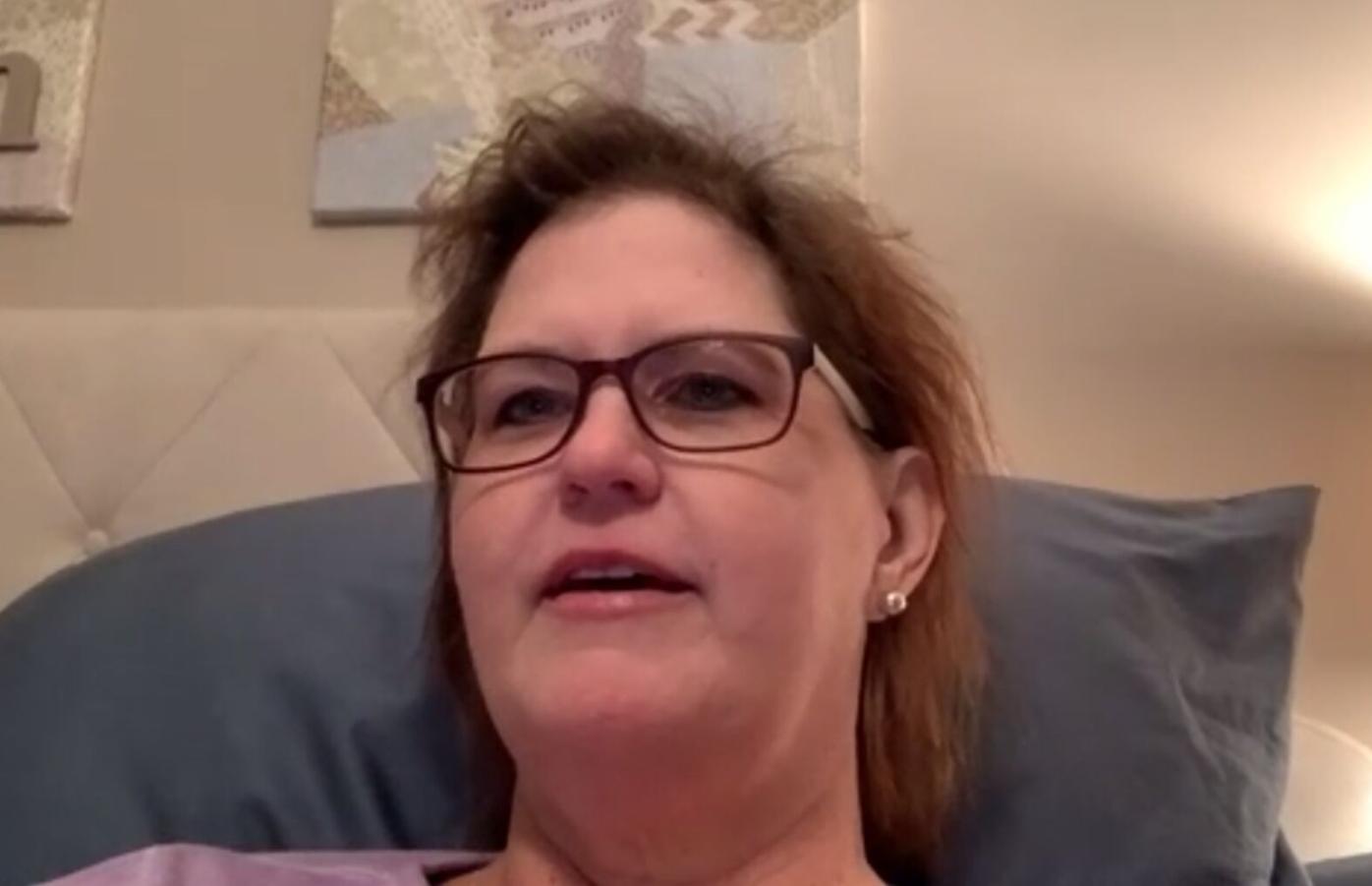 Cheryl Blackburn is recovering from a bout with COVID-19 that caused some concern about her donated kidney.

Cheryl Blackburn during dialysis. A kidney donated by a childhood friend ended her need for regular treatments.

In this photo of their senior class at Venice High School, Theresa Levering is seated at far right and Cheryl Blackburn is standing behind her.

Theresa Levering asked that the story of her kidney donation to her childhood friend Cheryl Blackburn stress the need for more people to make living donations of kidneys and liver tissue.

Cheryl Blackburn is recovering from a bout with COVID-19 that caused some concern about her donated kidney.

VENICE — How many close friends do you have? Not let-you-borrow-their-car close, but donate-a-kidney-to-you close.

Cheryl Blackburn has at least two.

A native of Nokomis, she was living in North Carolina when she was diagnosed with kidney disease about 20 years ago.

Initially, it was controllable with diet, by cutting down on potassium and protein — but after three or four years her diet wasn’t making a difference, she said.

Her brother and sister were both tested and both were a match. But neither could donate.

The testing revealed an undiagnosed condition in one of her sister’s kidneys that ruled her out. The final screening before surgery showed her brother had borderline hypertension, eliminating him.

Blackburn put transplantation on hold for several months, then had to start dialysis.

After about 10 months, she said, she had “gotten up the nerve” to tell her friends she needed a kidney.

Longtime friends Theresa Levering and Dawn Sweet, who both grew up in Nokomis, offered one of theirs, but Levering got to North Carolina for testing first. And she was a match.

Waiting to find that out was “burdensome,” she said, but as a person of faith she was confident.

Levering and Blackburn had been friends since the fifth grade at Laurel Elementary School, where they were in the same class and on the safety patrol together.

They remained close through Venice Junior High and High School. Blackburn’s father and mother, Earl and Elaine, were like a second set of parents to her, Levering said.

“She was like the third daughter,” said Blackburn, who was treated like a family member by Levering’s folks.

After high school she attended Florida Southern, in Lakeland, for a couple of years but had to quit after having surgery for ulcerative colitis, an inflammatory bowel disease that cost her her colon.

She went into retail and took classes at Manatee Community College, now State College of Florida. Then she got a job in banking, ultimately relocating to North Carolina for a corporate position with NCNB.

She ended up in Boston, where she took a job in human relations in the health care industry.

She came back to Florida after about six years because Boston “got too cold for too long.” She’s now vice president of Human Relations at Doctors Hospital of Sarasota.

Levering admitted to being anxious as the date for surgery approached, in 2008.

She wasn’t worried about the procedure. Her father had had a transplant about 20 years earlier and she had been working in health care, so she knew it was safe.

Her concern was that the operation might not happen for some reason, possibly leaving Blackburn on dialysis.

“I love my friend,” she said. “I hated to see Cheryl on dialysis.”

Levering’s surgery was first — a laparoscopic procedure to remove the kidney, which was taken to another operating room for implantation into Blackburn.

Her procedure was uneventful, she said, but the kidney didn’t “pink up” right away. She needed to undergo dialysis that night, and a couple more times during her week in the hospital before it was fully functional.

Her test numbers quickly dropped into the normal range, she said.

“That’s when you kind of have a relief point,” she said.

It would be another two months or so before she felt the full effect of the new kidney, but it was like a switch was flipped when it happened, she said.

“I hadn’t felt that good in probably 10 years,” she said.

Levering didn’t have any complications, aside from popping a stitch laughing too hard during a family gathering.

Both women have been healthy since the transplant, though Blackburn is currently dealing with another issue.

She’s recovering from COVID-19, having gotten infected on a visit to Florida in March to close her mother’s estate. It put her in the hospital for a week and is a particular threat to her because of her pre-existing health problems.

It’s been harder to deal with than the aftermath of the transplant, she said.

It threw her numbers out of the normal range for the first time since then, she said, and she’s still very weak, having just been released Saturday.

“It’s a struggle to get up to go to the bathroom,” she said.

Blackburn and Levering said their bond has deepened since the transplantation of “TC 2.”

Blackburn liked to call her “TC,” Levering said, so they decided to call the kidney TC 2.

Blackburn said she’s often spoken about the gift her friend gave her, and her mother, who had several stays in Doctors Hospital last year, was “always the pusher of Team Theresa.”

Levering, on the other hand, said she rarely brought it up over the years. But she mentioned it in a staff meeting last month and Monica Yadav, director of Communications and Community Engagement, asked if she and Blackburn would share their story in recognition of Donate Life Living Donor Day, April 7.

They agreed, Levering said, to bring attention to the need for donations of kidneys and liver tissue and the safety of doing so.

Donors are commonly family members, but anyone could be a match. And a donation from a nonfamily member might inspire someone in the recipient’s circle of family and friends to consider making a donation in a sort of “domino” effect.

Blackburn’s life would be vastly different but for that sort of donation.

Not that Levering thinks she did anything special.

“I just felt from the beginning that this was the right thing to do,” she said. “She doesn’t owe me anything.”

Maybe not, but that doesn’t keep Blackburn from expressing her gratitude as best she can.

“She’s not allowed to buy her own dinner when she’s with me,” she said.

That was her mother’s rule for Levering as well, she added.

Find out more about organ donation at  DonateLifeFlorida.org.