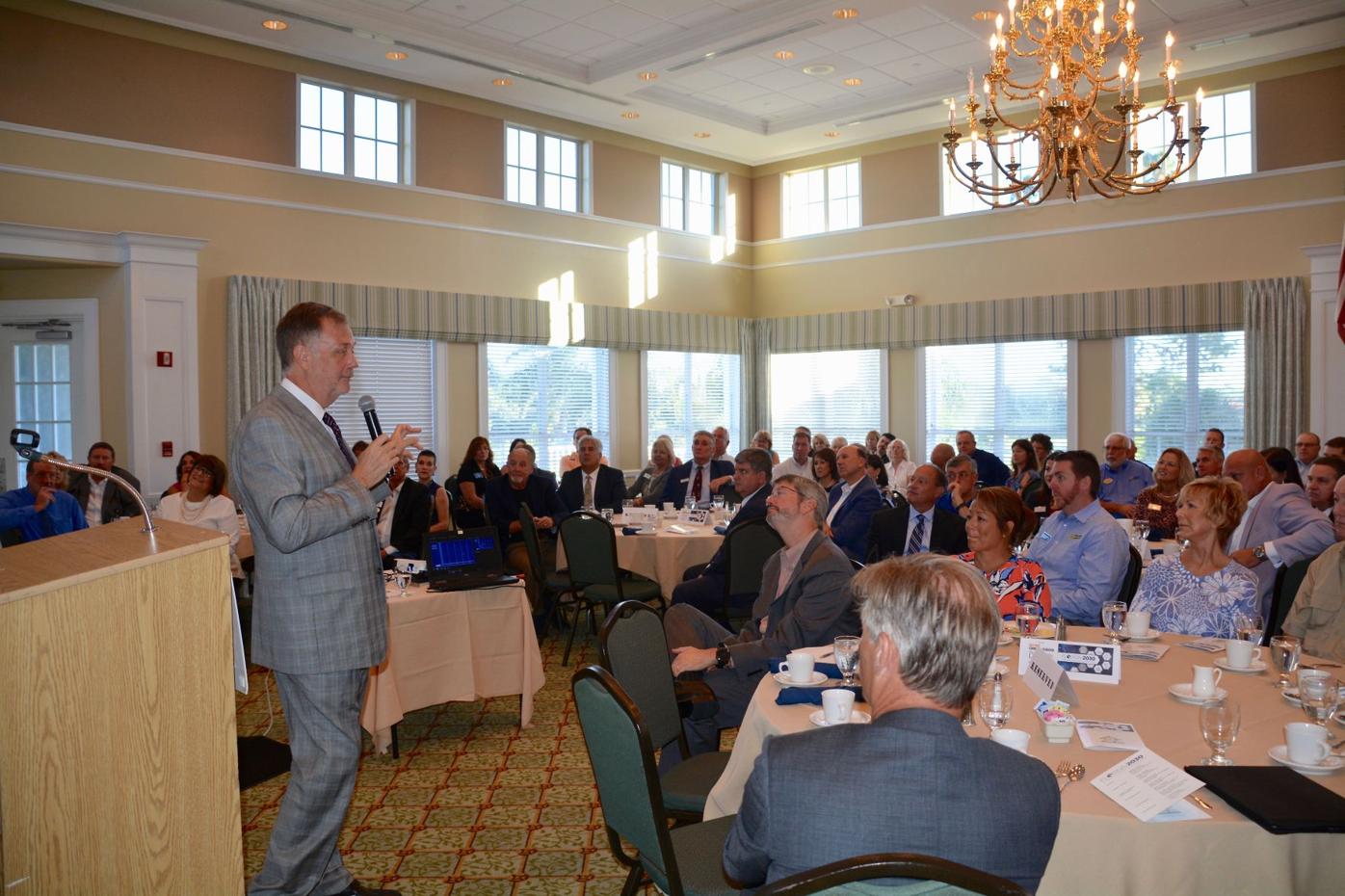 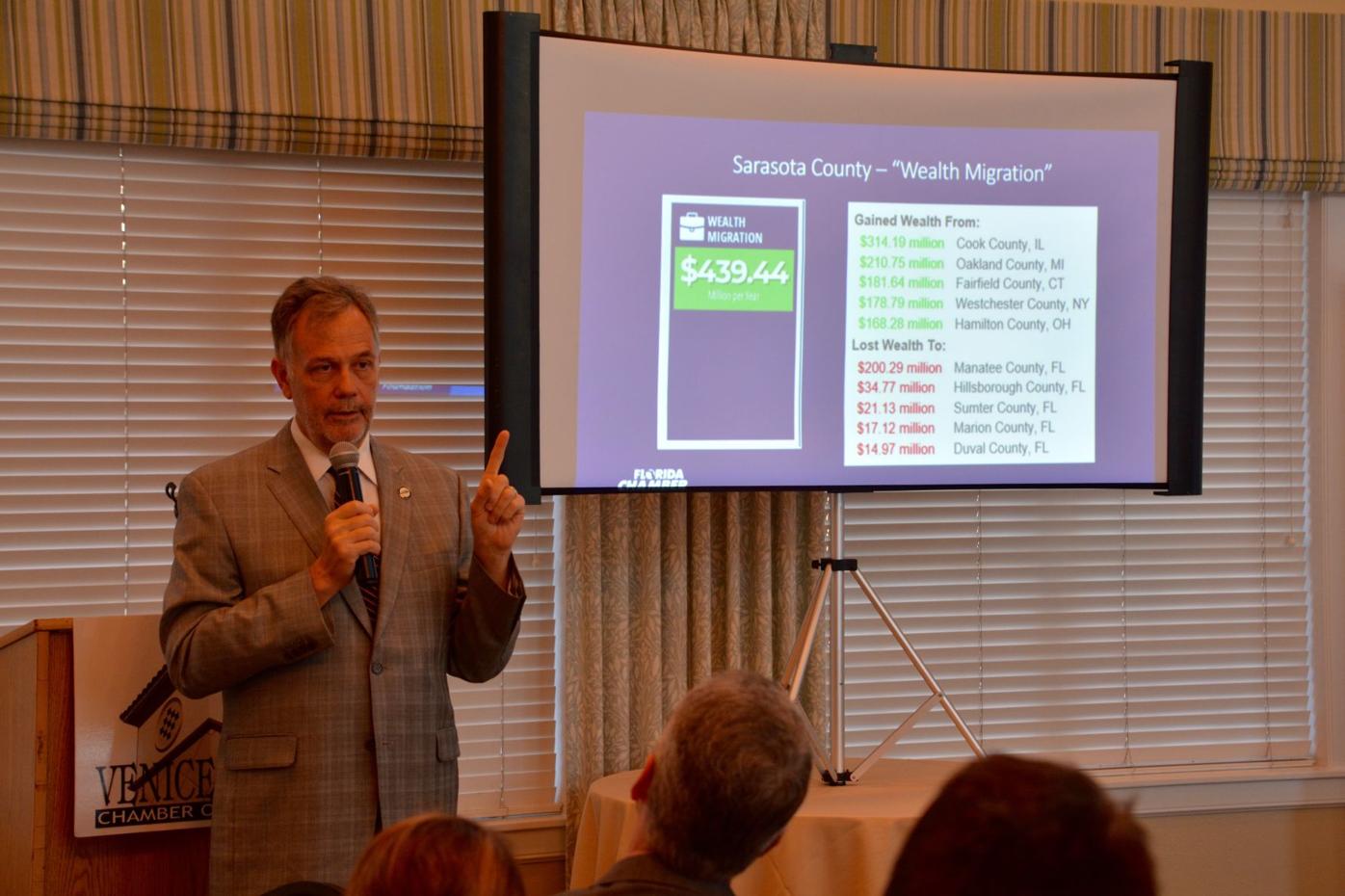 Dr. Jerry Parrish, chief economist with the Florida Chamber Foundation, said Florida’s population would go from the current 20.9 million to 26 million by 2030.

There was a full house at the Pelican Pointe Golf & Country Club in Venice on Wedneday morning for the Florida 2030 Economic Forecast Breakfast.

Dr. Jerry Parrish, chief economist with the Florida Chamber Foundation, said Florida’s population would go from the current 20.9 million to 26 million by 2030.

There was a full house at the Pelican Pointe Golf & Country Club in Venice on Wedneday morning for the Florida 2030 Economic Forecast Breakfast.

Prepare for the elder invasion.

More people than ever are moving to Florida, but if you think it’s new retirees or their families that are the fastest-growing population segment, think again. It’s those 85 or older, according to an economist.

Dr. Jerry Parrish, chief economist with the Florida Chamber Foundation, gave an enlightening presentation to members of the Venice Area Chamber of Commerce this week using statistical analysis. The presentation took place Wednesday morning at the Pelican Pointe Golf & Country Club. It was a preview of the Chamber’s Florida 2030 recommendations soon to be unveiled.

He gave kudos to Gov. Rick Scott for keeping the economy in good shape with a top credit ranking during his tenure in office, and called Florida one of the top job creators in recent years.

In fact, Parrish said, “Florida created more than 1 out of every 10 jobs in the country.”

According to Parrish, the governor’s re-election 2014 signaled the state was open for business, and the state’s balanced budget requirement meant less state debt. More people came to a state that was viewed as having less economic volatility.

Parrish urged the audience to thank a tourist whenever they get the chance.

They’re “the reason we don’t have an income tax,” Parrish said.

And they’re coming to Florida in droves.

Not only is Florida the new home for many retirees, but it’s also home of hurricane refugees from Maria and Irma. In the future, look for more “tax refugees” who like the idea of moving to a state without a statewide income tax, he said.

More than 1,000 people move to the Sunshine State each day, much of it from five counties in the Midwest.

One out of every four people will be over 65. Not only are they older, but they vote, Parrish added.

“Older people will be the next five million people to come to Florida. Eight counties from across the country will account for 57 percent of that population,” he said.

Florida has already gained over $1 billion in wealth from Cook County, Illinois; Oakland County, Michigan; Fairfield County, Connecticut; Westchester County, New York; and Hamilton County, Ohio; Parrish noted. Where did they move to? More than two-thirds of those transplants moved to the Gulf Coast in Manatee County, followed by Hillsborough County, and to a lesser degree Sumter, Marion and Duval counties.

“There is a tremendous amount of intergenerational wealth about to change hands,” Parrish said. And they’re moving to places like The Villages north of Tampa, Parrish noted.

“The dense (population) counties are going to get denser,” he said. That has tremendous implications for future infrastructure like roads.

Conversely, rural counties will see their populations continue to dwindle, straining their tax base and their resources. Rural folks will also move to the more dense areas.

“Depopulation of rural counties is a big issue … (and will) affect your state budget,” he said.

Creating job incentive programs at the county level will be important.

“As an economist, you can’t win the economics game by not doing job incentive initiatives,” he said.

Other statistics: The current statewide unemployment rate is 3.5 percent and declining; Sarasota County’s is 2.8 and declining.

Make sure to check out Dr. Parrish’s PowerPoint presentation on our website at https://www.yoursun.com/venice/.