Chief Shawn Carvey, right, and Deputy Chief Frank Giddens oversaw the takeover of emergency medical services by the department in October in the middle of the COVID-19 pandemic. 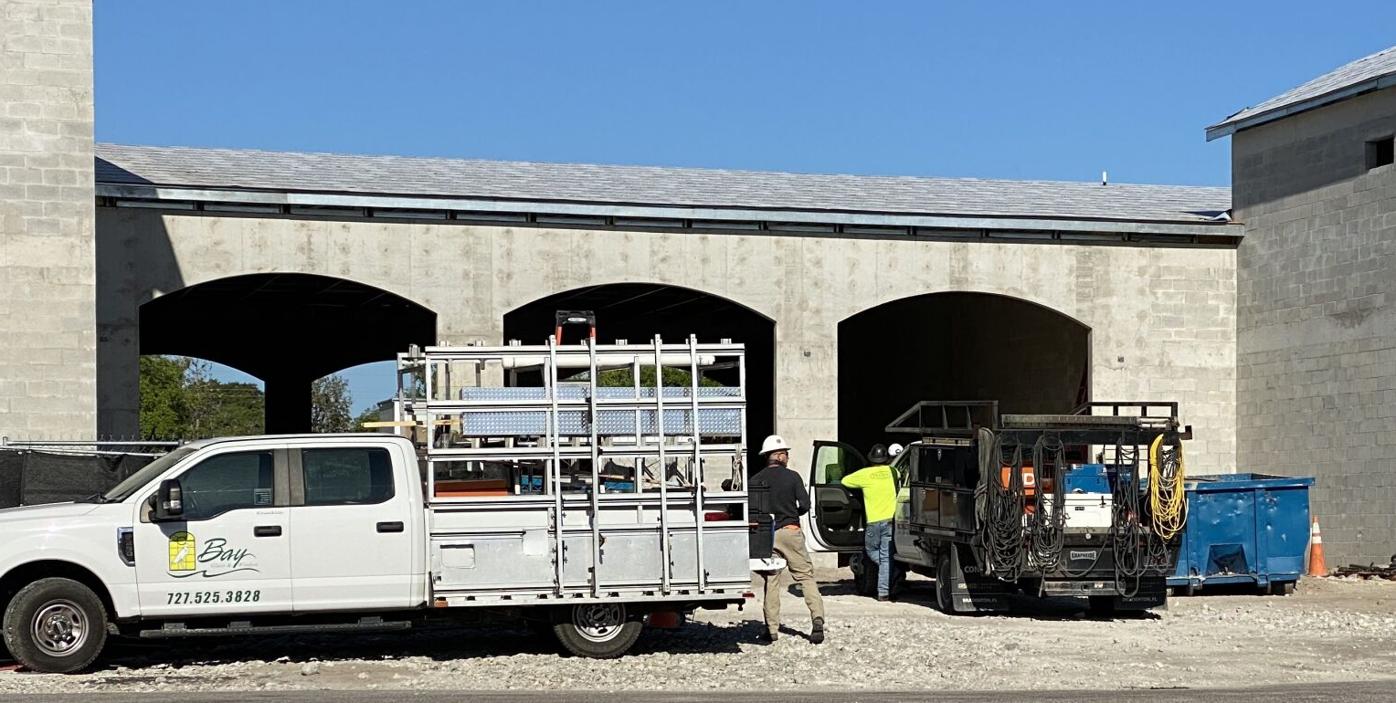 The new Fire Station 1 will have three vehicle bays — two for engines and one for an ambulance. 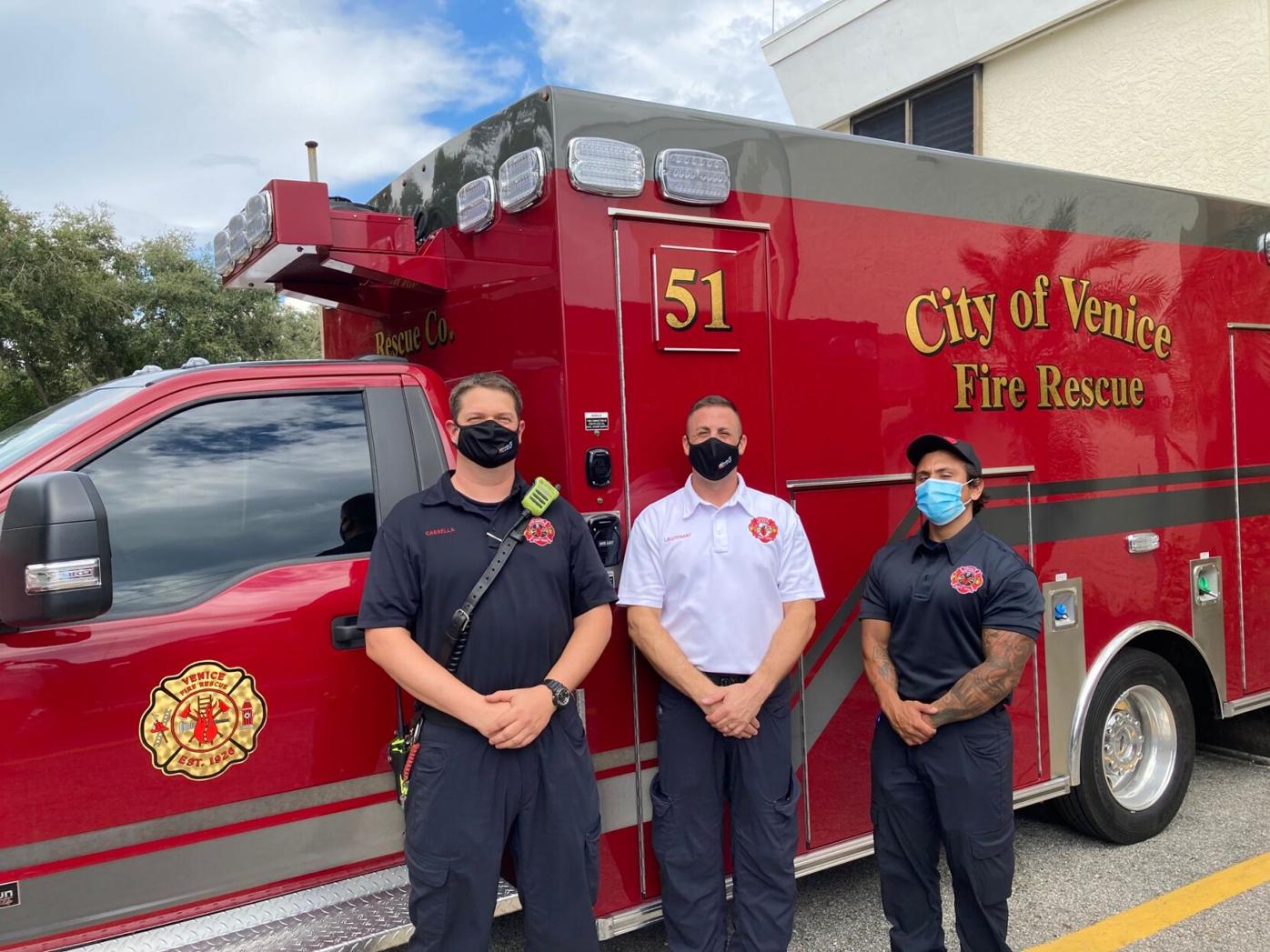 Chief Shawn Carvey, right, and Deputy Chief Frank Giddens oversaw the takeover of emergency medical services by the department in October in the middle of the COVID-19 pandemic.

The new Fire Station 1 will have three vehicle bays — two for engines and one for an ambulance.

VENICE — When Fire Chief Shawn Carvey and his team began planning to take over emergency medical services from Sarasota County, the world was months and months away from hearing about COVID-19.

That wasn’t the case when the takeover occurred, on Oct. 1.

“If you’re ever going to take over EMS and there’s a worldwide pandemic … it changes things,” Carvey said.

The basic structure of the new division was already set up when Division Chief Nathan McManus was hired, so he just needed to make some tweaks based on his experience, Carvey said.

One was working with local hospitals to ensure that arriving patients would be met promptly by appropriate personnel so the ambulance can return to service more quickly, he said.

“The beauty of the thing is we’re not reinventing the wheel,” Deputy Chief Frank Giddens said. “We just made it our own.”

The presence of the coronavirus was something else to be dealt with, though.

Dispatch, which is handled by the Sarasota County Sheriff’s Office, developed a COVID-19 checklist so crews would have a better idea of what they’d be dealing with when responding to calls.

But the policy was to wear personal protective equipment on every run anyway. Mask-wearing may even be permanent, Carvey said.

Vehicles were routed one way through the stations to reduce crew contact. Decontamination was performed on the way out and on return.

As a result, Carvey said, despite “a lot” of calls for COVID-19 complaints there hasn’t been a call-related case of it among the personnel.

There have been some people infected on their own time, though.

“That just shows you the PPE works,” he said.

Carvey didn’t have specifics on the number of COVID-19 calls the department has responded to but he said that from Jan. 1 through Wednesday there had been nearly 700 more calls this year than last year.

Although the city didn’t provide EMS coverage then, a fire engine accompanied a county ambulance on most runs to provide backup.

At the time he was hired by the department, Carvey said, he was one of the few emergency medical technicians.

When he asked for time off to get recertified he was told: “You won’t need it; we only have 500 calls a year,” he recalled.

When the decision was made to have all the firefighters trained as EMTs, the volume was 1,600 calls a year, he said.

Other than having to deal with a pandemic, everything is pretty much going according to plan, Carvey said.

The tax for EMS previously levied by the county now goes to the city, so the money is “staying home,” he said.

Six paramedics are on duty every day, including on the engines, so there’s one present on every call.

Response times are in the 4-to-5-minute range, a bit faster than the county achieved, and an ambulance is dispatched immediately for “high acuity” calls, such as a stroke or traumatic injury.

Billing for services was a little bumpy at the outset, Carvey said, but everything has been smoothed out and revenue is flowing in.

Those were the expected benefits. The takeover has had some bonuses as well.

For one thing, it has brought diversity to the department, Carvey said, as it turned out to be much easier to hire women and minority paramedics than firefighters.

And because they’ve all trained together, they’ve bonded.

“What really surprised me was how quickly it became a family,” he said.

The connection improved the working relationship between engine and ambulance crews because they’re all from the same department, they know in advance whom they’ll be working with and they all work under the same chief.

“There’s one captain steering the boat now instead of two,” Giddens said.

The working relationship with AirLife medical helicopter transport has been enhanced as well. One of the city’s paramedics is trained as a flight medic and two others are considering it, Carvey said.

He believes that growth, which generates fire service impact fees, will pay for service enhancements without tax dollars.

Eventually, that may include a training facility, which could be used by agencies around the regional, and a new Fire Station 2 in a more central location than on Grove Street.

A spot near the new public safety facility along East Venice Avenue would be ideal, Carvey said, as it would put the department within a two-mile radius of much of the city, close to main corridors.

The City Council began discussions about the topic at Tuesday’s capital improvement workshop. The rebuild of Fire Station 1, by City Hall, is still underway, with completion scheduled for August.

The department enjoys a good relationship with the Council, he said.

“Every time we told City Council we were going to do something, we’ve done it,” he said.

And that is the case of taking over EMS, he said.

“I can say it’s the best thing we’ve ever done.”

COVID-19 complicated the turnover of EMS from the county to the city, but the change brought benefits no one could have foreseen when the decision was made to do it.

The ability to provide advanced life support instead of just basic life support has gotten the department "a seat at the table" in meetings on emergency medical care with county, state and federal officials, Deputy Chief Frank Giddens said.

It also qualified the city to spend more than $840,000 of the $1.3 million CARES Act funding it's receiving on equipment fo the department that would have been paid for from 1-cent sales surtax or General Fund revenue, Carvey said.

And it enabled the department to get involved with vaccinations — vaccinating eligible city staff, assisting with local vaccination clinics and vaccinating homebound residents.

It recently received a supply of the one-shot Johnson & Johnson vaccine, so no one has to worry about getting a second shot, he said.

The crews love the response they're getting from the residents, some of whom haven't left home the entire pandemic, he said.

The person coming to give them their shot "might be the first person they've seen in a year," Carvey said.

It's the highlight of the day for both, he added.