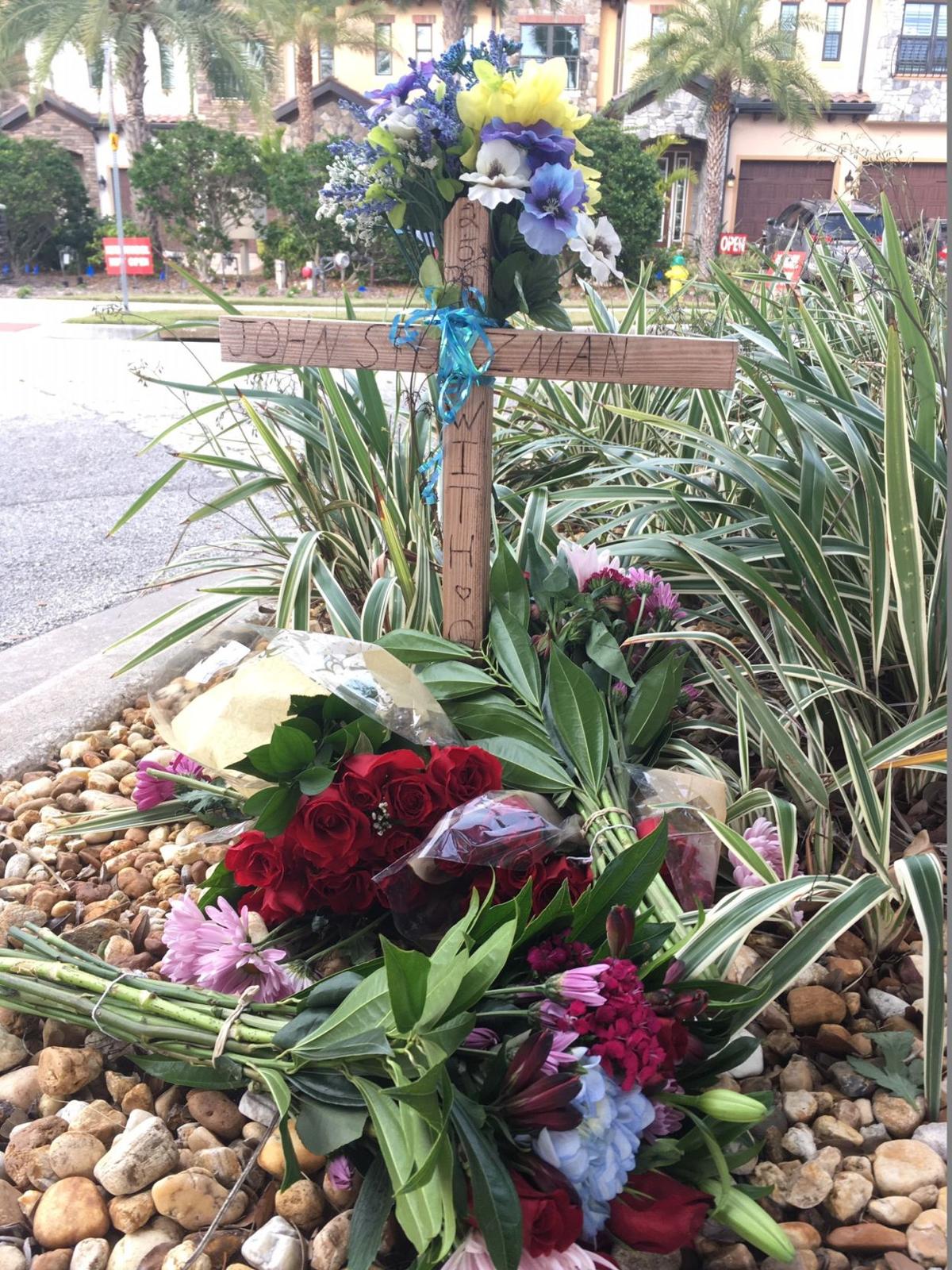 Venice High students laid flowers at a homemade memorial under the Venice Avenue bridge on Wednesday in remembrance of a bicyclist who died in a crash a year ago. 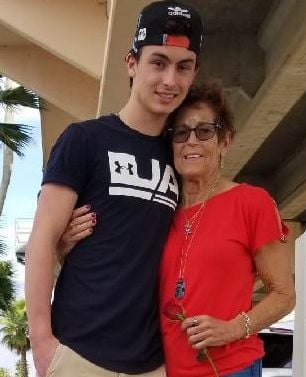 Todd DeGrasse and Sheryl Stutzman share a moment under the Venice Avenue Bridge next to a memorial to honor John Stutzman’s life. John Stutzman rode his bike into the roadway, where DeGrasse in his Jeep struck and killed him; it’s believed both were unable to see one another at the time of the tragedy. 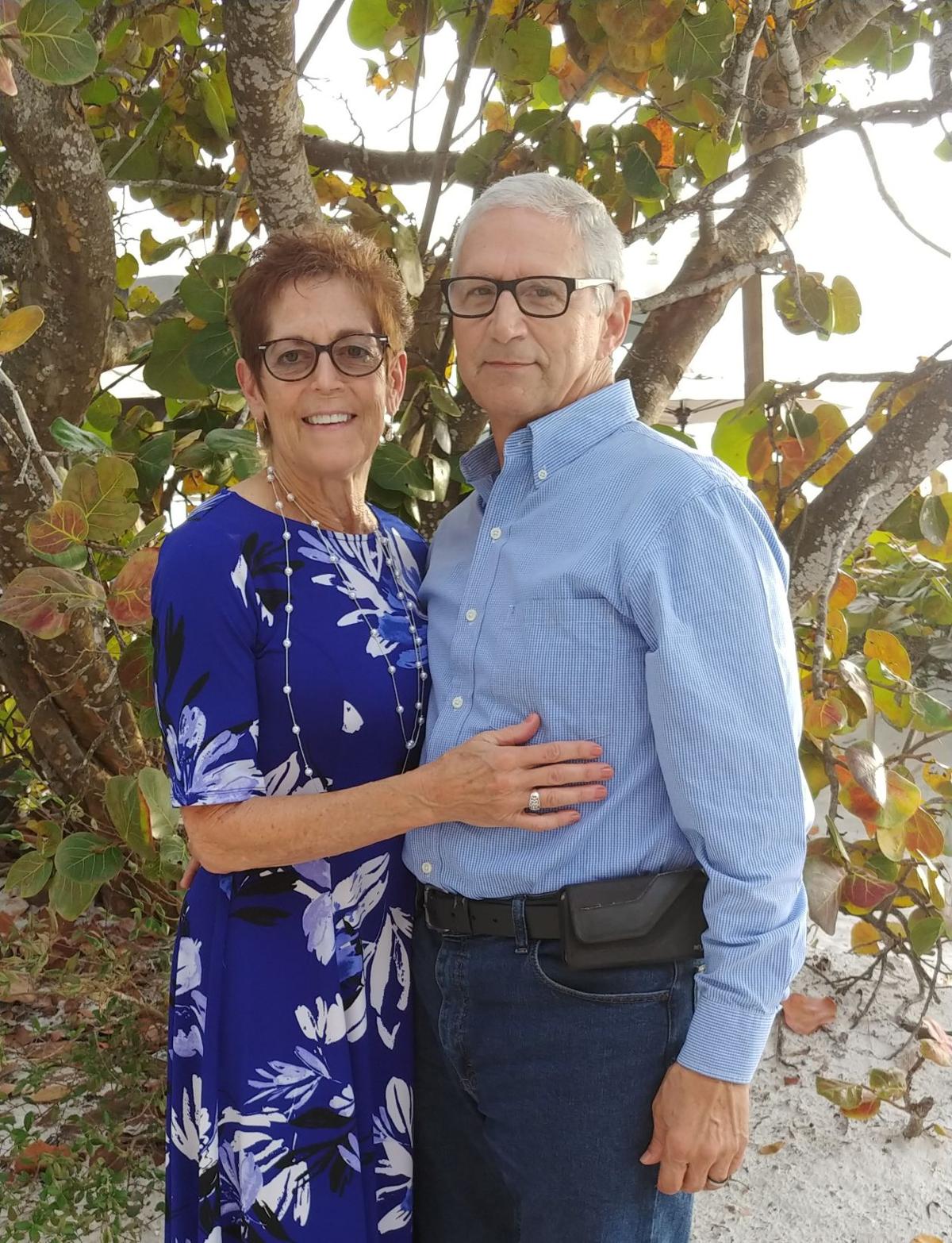 Venice High students laid flowers at a homemade memorial under the Venice Avenue bridge on Wednesday in remembrance of a bicyclist who died in a crash a year ago.

Todd DeGrasse and Sheryl Stutzman share a moment under the Venice Avenue Bridge next to a memorial to honor John Stutzman’s life. John Stutzman rode his bike into the roadway, where DeGrasse in his Jeep struck and killed him; it’s believed both were unable to see one another at the time of the tragedy.

VENICE — It was a year ago when a high school student tragically crossed paths with a bicyclist in a collision that would end one life and change the other forever.

Todd DeGrasse, then 17, was heading home after school in a red Jeep, traveling north on American Legion Way under the Venice Avenue Bridge.

John Stutzman, 66, rode his bicycle into the road.

The vision of both DeGrasse and Stutzman may have been partially blocked by a large cement pillar, one of many that support the bridge.

Stutzman, who was riding in a group of six, was struck and killed by the Jeep.

Todd DeGrasse was distraught at the scene. The teenager took a seat on the curb with his face in his hands overwhelmed by emotion.

In a moment of compassion, Stutzman’s wife Sheryl, came over to the youth and consoled him. She gave him a long hug and assured him it was not his fault.

Letters to the editor in the Gondolier Sun that followed spoke about speeding in the area by children going to and from school along with the perils of texting and driving.

That didn’t help Todd, who still struggles with the tragedy, according to his mother Joy DeGrasse. He wasn’t speeding that fateful day. He hadn’t been texting. Those were just assumptions that missed the mark.

Todd DeGraase was not cited for any violations.

Everyone involved deemed it a freak accident at a location that probably should have crosswalk markings to warn traffic there’s a well-used pathway underneath the bridge which serves as a trailhead for the Intracoastal Waterway Park.

After the crash, friends of John and Sheryl Stutzman placed a homemade wooden cross at the area where John Stutzman died.

Sheryl Stutzman has visited the site only once since that day, but she befriended Todd and speaks with him regularly.

It’s good therapy for both of them, she said.

On Thursday, at Todd’s request, family and friends, along with Venice Police Department Master Officer Paul Freeman, who investigated the crash, gathered at the site to pray for and remember John Stutzman.

Todd and his family earlier took Sheryl and her brother to lunch, then made their way with some of Todd’s friends to the bridge to lay roses at the site.

Sheryl Stutzman talked about the day of the crash.

“We parked our vehicles at the north end of Legacy Trail in Sarasota that day and made our way on bicycles with two other couples to Venice where we had lunch,” she said. “We didn’t really know the area. We were going to get back on the trail. It was devastating for both of us.”

“I feel for Todd because he was driving that way every day,” Sheryl Stutzman said. “He was just so broken and hysterical, screaming, ‘I’m so sorry.’ I knew he was a special young man, very sensitive — and I didn’t want this to ruin his life.”

“I would check to see how Todd was doing with his motorcycle races. We’re kind of like family. He’s like a son. We have this connection,” Stutzman said.

She said she realized the marking of one year would be difficult for both Todd and herself.

“I wanted to do anything I could to help. I thought, yes, let’s have lunch. You’ve got to go on with life,” she said. “There’s no way around it. He’s such a kind, compassionate young man. He made it a really nice day.”

Todd DeGrasse said what mattered most to him on Wednesday was to see a smile on the face of Sheryl Stutzman.

Her hugs and demeanor, Todd DeGrasse said, “felt like forgiveness.”

For the entire DeGrasse family, Sheryl’s compassion has been a blessing.

“Sheryl and our son Todd are true examples of healing and love. I hope others can learn from this,” Joy DeGrasse said. “People are always so quick to blame and point fingers.”

“Being involved in any act where a life is lost is traumatic for anyone, let alone a young man. He still struggles. They both do. But together, the have found strength, love and healing for one another that will last a lifetime,” Joy DeGrasse said.

Joy DeGrasse said the gathering honored “a great man who tragically lost his life to a freak accident.”

“Our message to everyone is to love a little more, because you never know when it’s your time to be called home,” Joy DeGrasse said.

"He was just so broken and hysterical, screaming, 'I'm so sorry.' I knew he was a special young man, very sensitive - and I didn't want this to ruin his life." - Sheryl Stutzman, widow of John Stutzman; friend of Todd DeGrasse