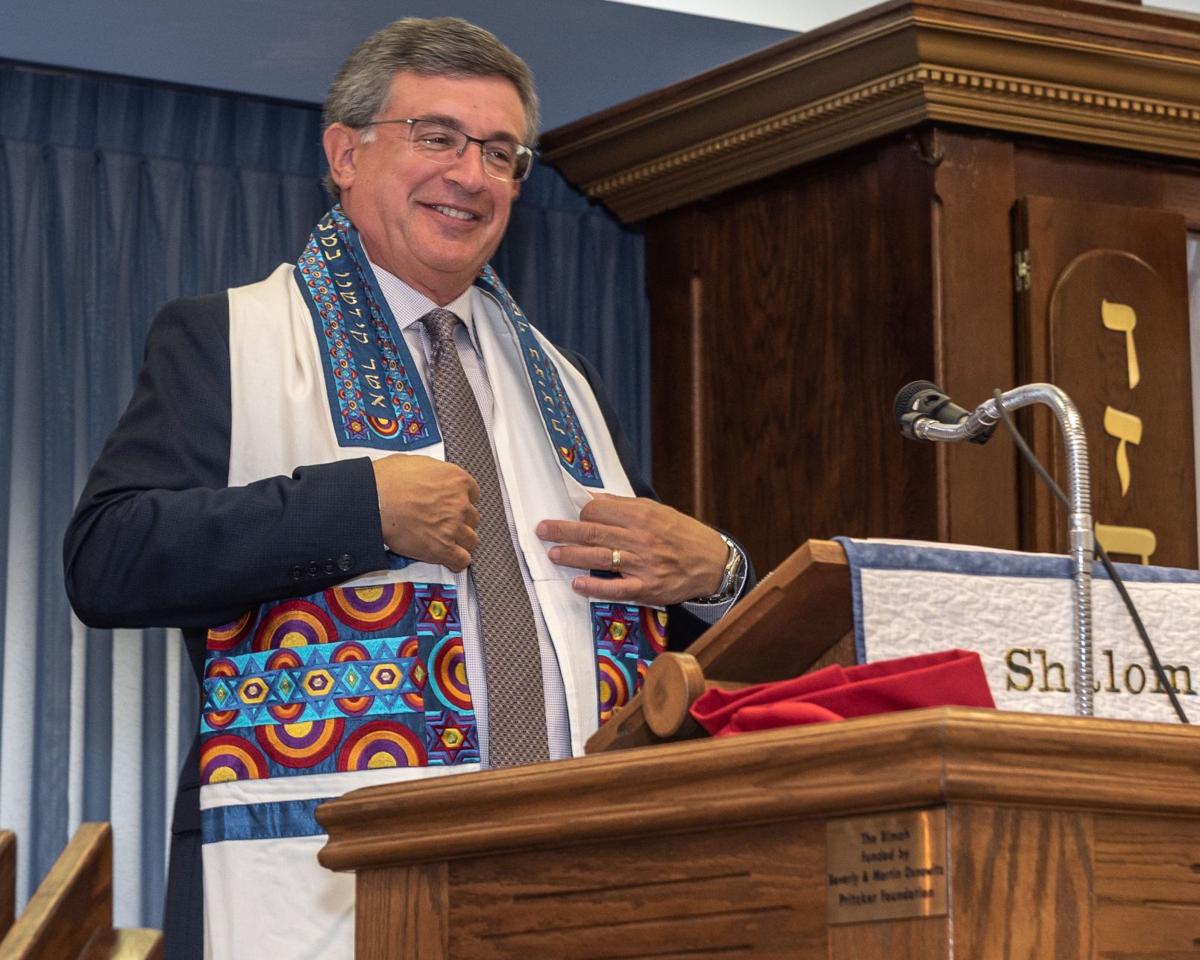 Rabbi Ben Shull is pleased with his new tallit (prayer shawl), a gift from the Jewish Congregation of Venice on the day of his installation as the congregation’s spiritual leader, Jan. 26. 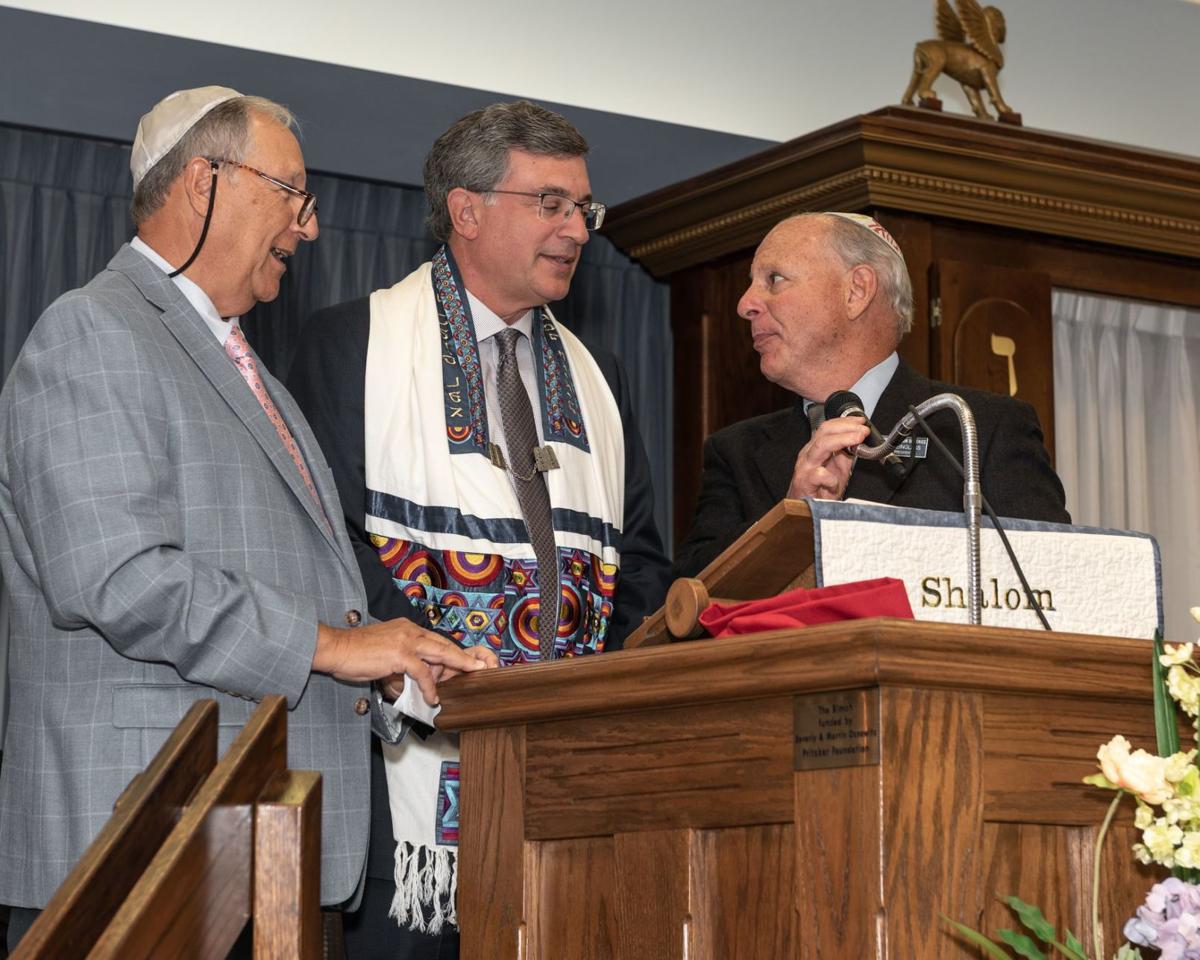 Rabbi Jonah Layman of Olney, Maryland; Rabbi Ben Shull of the Jewish Congregation of Venice and Steve Kleinglass, member of the search committee of the JCV, at the installation of Rabbi Shull as spiritual leader of the JCV on Sunday, Jan. 26.

Rabbi Ben Shull is pleased with his new tallit (prayer shawl), a gift from the Jewish Congregation of Venice on the day of his installation as the congregation’s spiritual leader, Jan. 26.

Rabbi Jonah Layman of Olney, Maryland; Rabbi Ben Shull of the Jewish Congregation of Venice and Steve Kleinglass, member of the search committee of the JCV, at the installation of Rabbi Shull as spiritual leader of the JCV on Sunday, Jan. 26.

VENICE — The sun shone on the Jewish Congregation of Venice on Jan. 26, its members, friends — and especially Rabbi Ben Shull and his family.

Shull is the new spiritual leader of the congregation and has been for months now. From his first day he has been fulfilling his duties and then some, calling on members, leading services, teaching classes and so much more but mainly endearing himself to now only the Jewish community but to his new hometown of Venice.

He and his wife, Stacy Lang, decided long ago that they would one day retire to Venice. He was working in Tampa at the time. He was a relatively new rabbi and newlywed when invited to the JCV to conduct a service for a special holiday. He and his wife remembered Venice from that day on and members of the congregation must have remembered him too.

With his great smile and charming demeanor, he has hit the ground running here in Venice. There was cause for celebration when he presided over his first service. I was there for that and of course stayed for the cake and goodies afterwards as everyone gathered around him, his wife and his college-age son.

A few weeks, later one of my friends who is a member of the congregation invited me to dinner with the rabbi and his wife and also with the JCV president Harvey Cohen and his wife. To say I was honored is an understatement.

While all those people helped make the day quite special the real icing on the cake was the gift from the JCV’s crew of ladies who quilt. The JCV is filled with incredible examples of their work from coverings on the altar and wall hangings to a hand-quilted fitted cover for the grand piano in the sanctuary.

What more perfect gift for the rabbi of the JCV than a quilted tallit, a prayer shall. He was quick to put it on as soon as the package was unwrapped and Judy was right there to capture his biggest smile yet. That it was handmade by congregation members made it all the more special.

The other thing that made it all so special had to be the presence of his longtime friend and mentor, Rabbi Jonah Layman, who came from Oleny, Maryland to participate in the service.

Everyone knows I love this town and my job but meeting people like these is the real reason. This area has people of many different religions and ethnic backgrounds but a common bond in their love of the arts — another legacy of the circus having been in Sarasota and Venice for more than 65 years, by the way.

How many towns the size of Venice have so many community and professional theaters within 45 minutes or so, plus all the art centers and of course the Ringling museums and the Ringling School of Art and Design and whatever your religion, or even lack of one, there is a place for you.

Judy Haran, who took the photos with this column said there were about 200 people at the installation, including several pastors from local churches and the Venice Police Chief Tim Mattmuller.

Thank you Judy for being my stand-in Sunday.

Coming up Feb. 16 at the JCV is my favorite event of the year — the Jewish Food Festival. It is the one time I can get really good corned beef on rye sandwiches — actually just one because they are huge. You can read the details on that event in the religious briefs in Our Town today and the next two Saturdays.