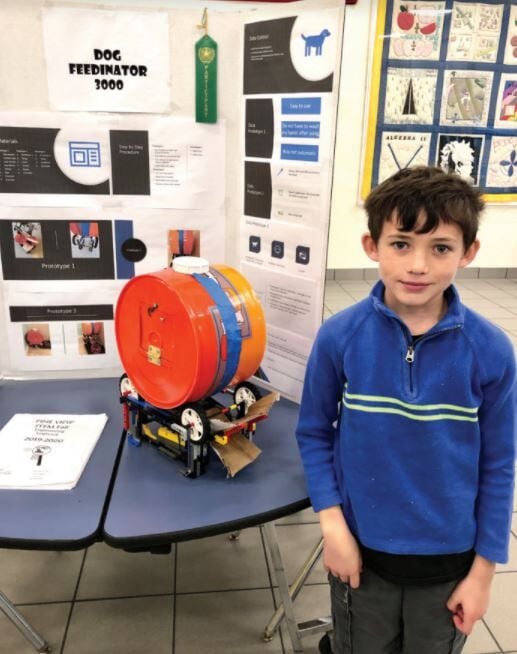 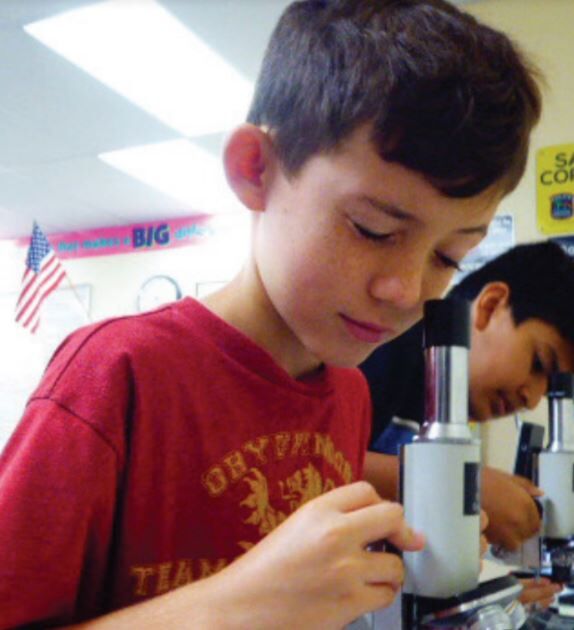 Fifth-grade teacher Peggy Barber believed that Ethan Isaacs would have done great things. “He would have either come up with an invention that hadn’t been thought of, or he would’ve saved the world in some way,” she said.

Fifth-grade teacher Peggy Barber believed that Ethan Isaacs would have done great things. “He would have either come up with an invention that hadn’t been thought of, or he would’ve saved the world in some way,” she said.

OSPREY — According to his family, sixth-grader Ethan Isaacs marched to the beat of his own drum.

He loved pranking his brother, eating whole desserts in single bites, constructing and deconstructing Lego sets, working on puzzles in the library during lunchtime, collecting rocks, mastering complex board games like Catan or Chess, and methodically approaching any problem in his way, whether it be feeding the dog or naming a go-kart.

Ethan was injured in a sailing accident Saturday, Nov. 21 and later passed at the hospital.

“He was a very happy kid, very cheerful. He was always smiling and laughing. He was strong-willed, very determined,” said Ethan’s mother, Mindy Isaacs. “I’m thankful for the joy that he brought us and the happiness and the laughter.”

Ethan’s joy was contagious everywhere he went — school, chess club, sailing, the tennis courts, the FabLab, and so on. He was happy, and he made others happy.

“We would be running and (Ethan) would start skipping all of a sudden,” Mindy Isaacs said, smiling and laughing behind her mask.

Ethan’s grandfather, Van Sudduth, interrupted to get up and demonstrate the way Ethan taught him to cross his legs while skipping. He said he still skips that way to warm up before pickleball.

Mindy Isaacs reflected on the family’s time in quarantine where they played board games, biked the Legacy Trail, hiked and tried to make every day an adventure. The family was very close already, but Ethan and his Brother, Tanner Isaacs, were inseparable.

“My neighbor told us she had never seen two brothers so close; it was actually quite abnormal,” Linda Sudduth said.

Ethan and his grandparents were very close, too. Their eyes lit up as they talked about their grandson.

Van shared another story, explaining how he taught Ethan that ‘math is money.’

“I would have five or so dollars and say, ‘If you can solve the math problems then you win,’ and he would win them. We started to call him ol’ money bags because he would save all of it,” Sudduth said.

He went on to say that sometimes Ethan would answer questions so quickly that he had to take a minute or so to do the calculations himself. After catching up to his grandson, he said Ethan was always right.

The family passed around a note Ethan wrote about how “ants have besieged the condo!” in reference to his grandparents’ house in Naples. His handwriting was big and very neat, Linda said she thought it was on the same level as “a 40-year-old.”

Ethan would often observe and write about everyday things that others might view as mundane. He would sometimes spend all day studying what was going on around him, and those nights he would shout, “Breaking news!” before letting the family know what had happened during the day.

“In first grade, Ethan’s teacher thought he had a hearing problem,” Mindy said, “because he wasn’t responding in class, but when we got him tested, we realized he was gifted. He was just a perfectionist and wasn’t going to give an answer unless he knew it was right.”

Moving from Kentucky to Sarasota two and a half years ago, Ethan started Pine View in fourth grade. Ethan’s teachers were also well-aware of his intellect.

“(Ethan) was off-the-charts-smart,” social studies teacher Liz Ballard, who had also been his PE teacher in fourth and fifth grade said. “Not only that, he skipped a grade, so he was young for his age… He was just a good, sweet boy. It’s quite a loss.”

“I really think he would have majorly contributed to the world of science in some way,” Barber said with her hand on her heart and a faint break in her voice. “He would have either come up with an invention that hadn’t been thought of, or he would’ve saved the world in some way.”

According to his family, he sometimes used his intelligence to do what all kids do — try to get out of chores — only he did it his own way.

“If he didn’t want to do what you asked him to do, he would look at you — he didn’t say ‘no,’ he didn’t throw a tantrum, he didn’t run away. He wasn’t obstinate, but you could tell he was thinking, ‘Do I really want to do this?’ and if not, ‘How do I get out of this?’” Linda Sudduth said. “You’d think he was a lawyer the way he would argue his case... it was like a monologue of all the reasons why he was right.”

Ethan’s persistence, combined with his intelligence, was a powerful force.

“Feeding the dog was Ethan’s chore and he wanted to figure out a way to get out of it. So, he created an automatic dog-feeder,” Mindy Isaacs said, while describing his STEM fair winning invention, the Dog Feedinator 3000.

Science teacher Marie Rosander was Ethan’s teacher this year, but she got to know him last year during the STEM fair.

“His friends always described him as the person who cheered them up. He had a great sense of humor, and he has one of those little personalities who you know will grow up and will do something in this world,” Rosander said.

When he wasn’t competing in the science fair, Ethan might be found dancing – just not in the fifth-grade ballroom dance unit in gym class.

“Ethan loved to dance, his Papi got him this hat...” Linda Sudduth said, referring to her husband beside her.

Van continued the thought, gesturing to his head, “I had the name ‘Dance King’ written on it, and he would put it on.”

However, when it came to an audience outside of the family, Ethan would not show off his skills.

“Ethan is the only student I ever excused from ballroom dance, because he hated it so much… I finally said to him, ‘Ethan, go to the media center and write a report on these dances.’ And he grabbed the assignment sheet from me and ran out of the gym and ran to the media center,” Ballard said.

“But in front of us,” Mindy Isaacs said, “he would dance... We have a video of him making a peanut butter and jelly sandwich to a Michael Jackson song and he was just dancing. He loved to dance – you never got to know all the sides of him unless he was comfortable.”

Ethan got comfortable with Pine View quickly. Though moving to a new state in the middle of elementary school is hard for anyone, Ethan was so perfectly fit for Pine View that his shyness soon faded after making close friends.

“He loved Pine View. He was proud to be at Pine View,” his mother said. “He loved all his classes, he loved his teachers, his friends. He just really thrived there. It was a really good environment for him.”

“He was a year younger than all of his classmates, but there was an old-soul quality or mentality about him,” Barber said, reflecting on the visibility of his thought process. “It would take a while; you would have to sit there and let him think. You could see him processing, and he would look at you for a few seconds before the first word would come out, but we knew it was going to be worth the wait, because once he spoke he always had something important to say.”

“(Ethan) was a great student... very quiet and shy, but when he came out of his shell, he had a wonderful personality and a very funny sense of humor,” said Eduardo Maron, Ethan’s fourth-grade teacher. “I remember when we did ‘Fun Friday,’ he’d opt to stay inside with his buds, and they would stack dominoes together – that was his thing. They would try to build these big domino stacks, when you’d knock one of them over, it’s a chain reaction.”

“I think Ethan really came to love Pine View and the friends he made here,” Ballard said, wiping away tears. “And I think Pine View was the perfect place for him. Being in a school for gifted kids, he kind of found his home in a sense. This is where he belonged; it may have taken him a couple of months to fit in, but once he did, he really did.”

Another of his friends, Om Patel, spoke of how he was always helping people.

“Every weekend we would go on bike rides, and… we would just bike around the community and if it was a bad week, say we got a bad grade on a test, he would always make jokes and make us laugh so that we wouldn’t feel bad about our grades,” Krish Gandhi said about his experiences with Ethan and their shared friend, sixth-grader Aadi Bhensdadia.

“He will always be remembered by everyone who knew him.” Bhensadia said.

Hearing from Ethan’s friends and teachers has helped the Isaacs family through their grieving process.

“(The Pine View community) has not hesitated to reach out. Mrs. Hazlet sent a card. She said, ‘I still remember his freckled face.’ Mrs. Barber talked about how sweet he was, and she sent pictures,” Mindy Isaacs said. “We’re grateful for the memories. It really helps us to know that he did have an impact in other people’s lives. Telling us that, that means a lot.”

“The perspective that the kids offered, too, helped us with grieving. Whether it was with pictures or with words, the students helped us more with healing than some adults. A lot of adults don’t know what to say when someone dies. They feel awkward or that they might hurt the person’s feelings. But with the students, they were just honest. They shared from the heart and it was just very, very beautiful,” Mindy said.

Mindy said that the family is starting a memorial fund in Ethan’s name and hoping to get legislation passed related to boating safety.

“We want him to be remembered,” his grandmother, Linda Sudduth, chimed in.

The family held a small private service in memory of Ethan three weeks ago but is in the process of planning a school-wide memorial service.

“Ethan really does live on,” Van said, his proud smile shining throughout the interview — an interview that was more full of laughter than it was tears, because that’s who Ethan was. That is who Ethan will always be.