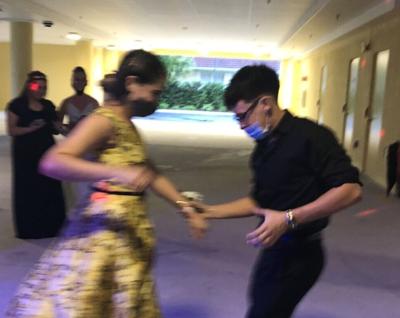 VENICE — Parents of Venice High School students took things into their own hands and planned a parent-sponsored prom for May 15.

On a Venice High School families social media page, the parents had not heard anything about the school’s plans for holding a prom at the time.

“So we decided we were going to plan a prom,” said Gail McMillan, one of the five mothers involved with planning the event. “We have to do something for the kids.”

After the parents announced their prom concept, the school came out with its own plans for a regulated prom.

For the school district’s safety measures, no dates will be allowed, masks will be required at all times and the event will be completely socially distanced.

McMillan said students like her son are tired of wearing masks all day for school, work or sports.

“Parent-sponsored prom is more fitting for me, it gives more of a sense of normality,” said Trinity Angelo, a senior at the high school and the student representative for the parent sponsored event.

The parent-sponsored prom will be held at Plantation Golf & Country Club in a room that can hold up to 1,000 people, even though McMillan hopes for about 300. This prom will look like a normal prom with a disc jockey, photo booths and even a three-course meal.

“They can be normal kids and sit with their friends and dance,” McMillan said.

However, with all of the fun comes responsibility. To attend the prom, students or their parents, for those under 18, must sign a waiver that includes a COVID-19 clause.

Other safety measures during the event will include a hired security team, temperature checks, hand sanitizer stations and students must wear a mask in the common areas of the country club.

"This year will be ingrained in their minds forever...But we are giving them something actually good to remember from their senior year." - Gail McMillan, parent

While in the event room, students can remove the masks, but once one leaves the event there will be no re-entry.

Some parents were concerned about the event but heard about the spacing of the room and the other safety measures taken and felt better, McMillan said.

However, she said there are parents who are still concerned of the risks at the event.

Along with safety measures for everyone attending, McMillan mentioned the event is covered in case of any incidents. The parents purchased liability event insurance and the venue has its own insurance.

With everything covered on the parents part and safety measures in place, students and parents alike seem happy about the event.

“There are so many grateful kids and parents right now, since everything was taken away from the students this year,” McMillan said.

While the event is limited to a senior prom, senior students can bring students from other schools, younger dates or dates under 21.

Angelo said her date goes to another school and his school does not have a prom planned at all so this is his chance to attend one. She also said some seniors are inviting the Venice graduates to come back since they missed out on their own prom in 2020.

Other than prom, the parents are scheduling other events that the students would have missed out on in their last semester. In place of the Universal Studios grad bash, the parents want to throw their own senior event in a large outdoor area.

Since the events, including prom are not funded by the school, the parents are taking donations for the events and also for the students that may not be able to afford prom attire or prom itself. Tickets for the event are $60 a piece.

They want all seniors to be able to attend if they would like since the year has been difficult on everyone.

“Not being involved has been hard this year,” said Angelo, who is taking classes on Zoom.

With activities limited and the school prom not looking the same as years past, Angelo said this year has been very different compared to other years for the senior students.

“This year will be ingrained in their minds forever,” McMillan said. “But we are giving them something actually good to remember from their senior year.”