An apparent funnel cloud or tornado comes down from the sky on Monday evening about 5:50 p.m., according to Lindsey and Jason Hutchison, who took video of the weather event while in their car at Wellfield Park in Venice. 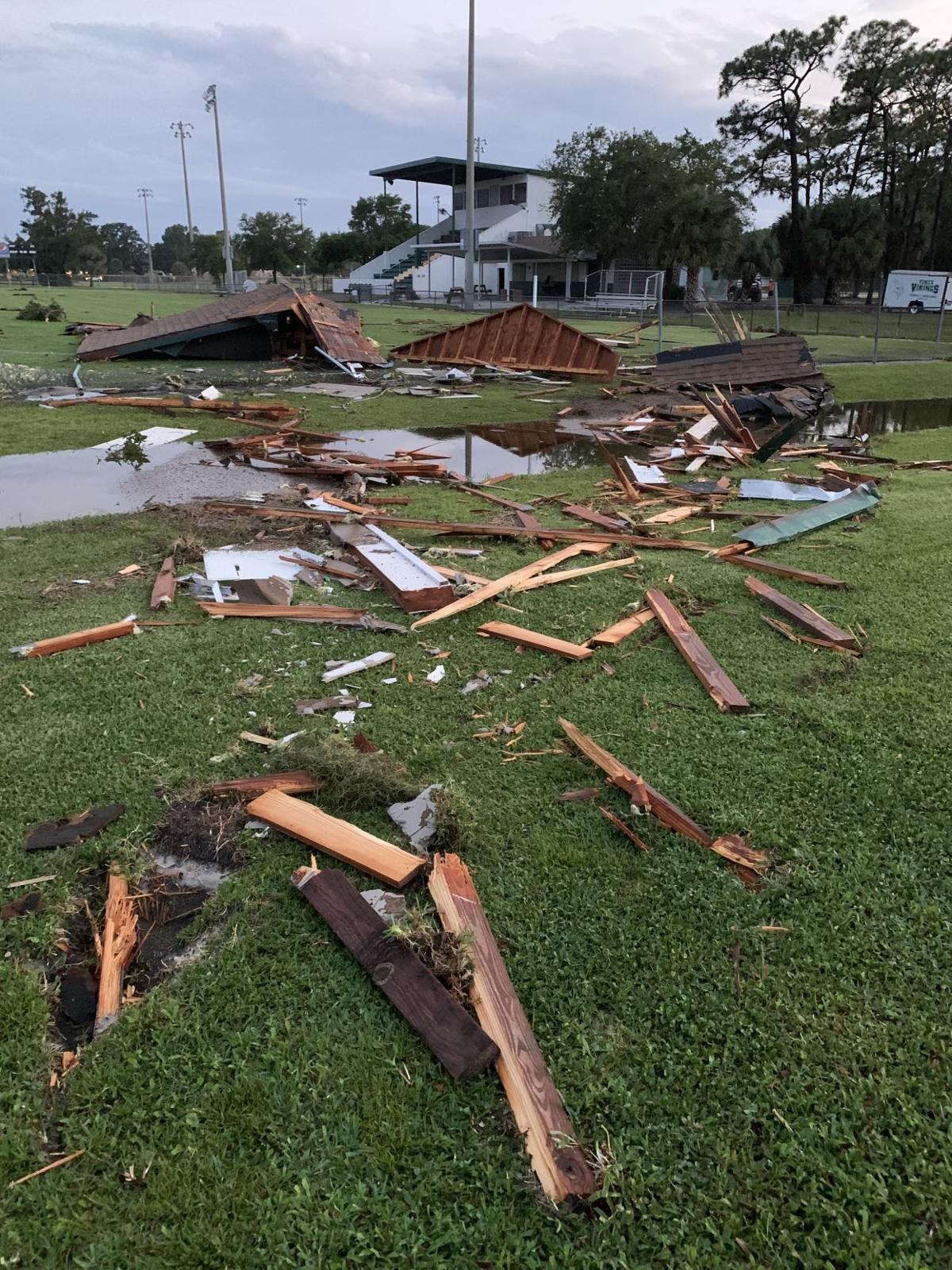 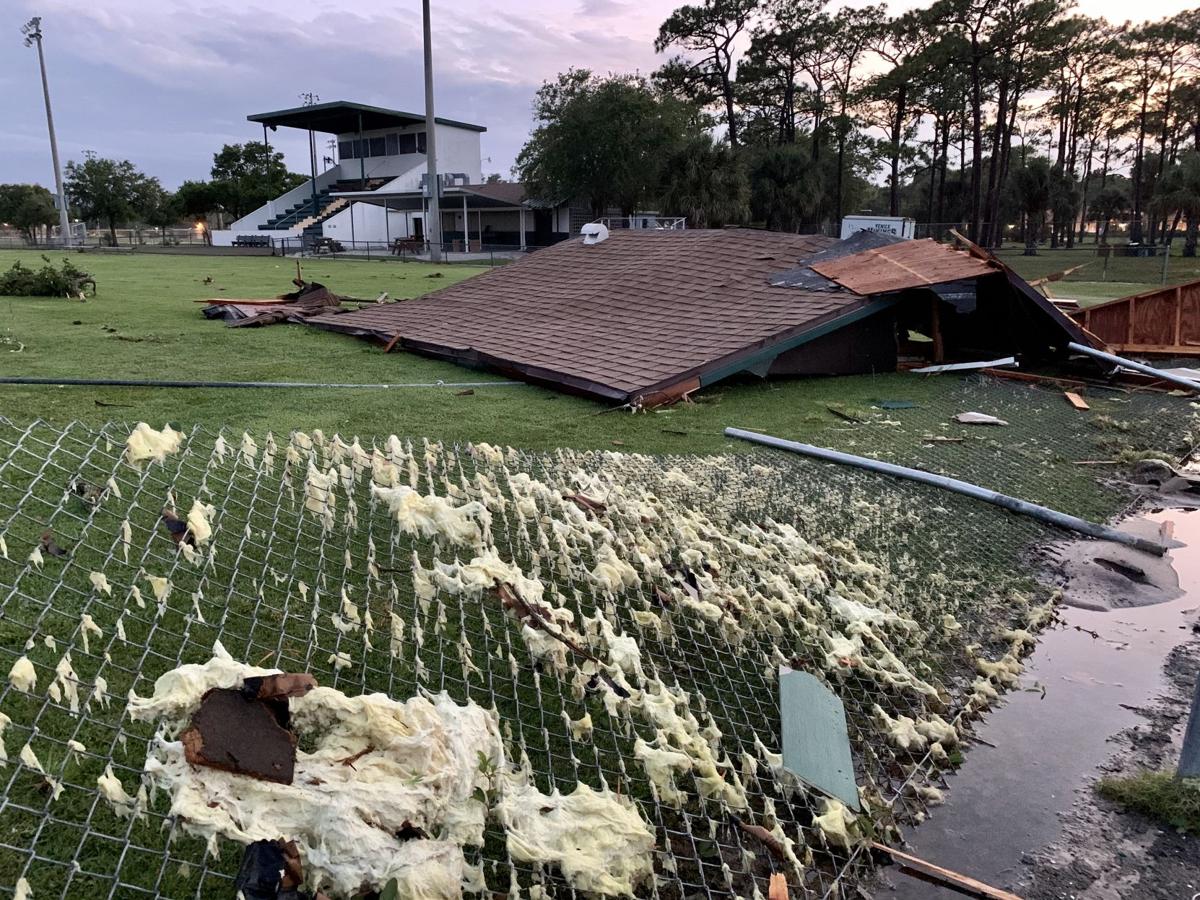 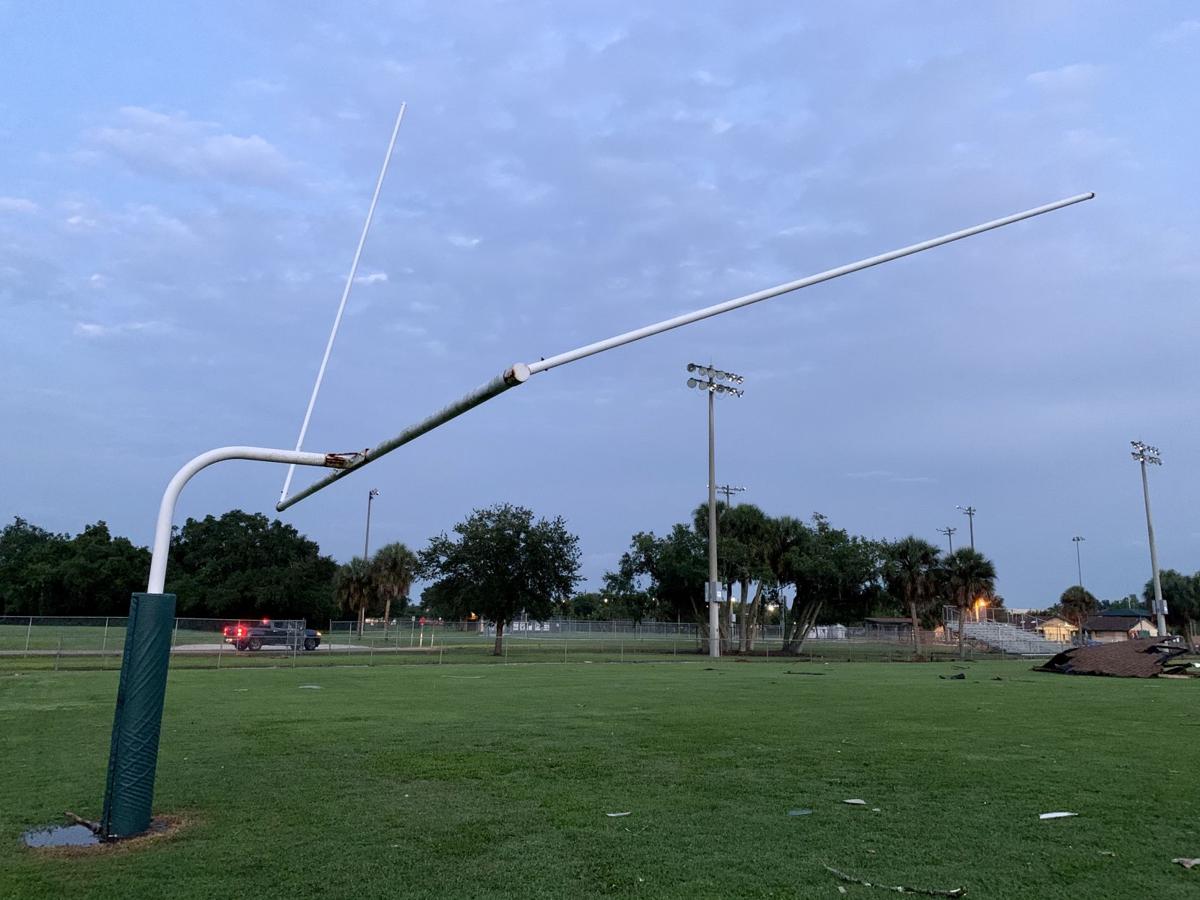 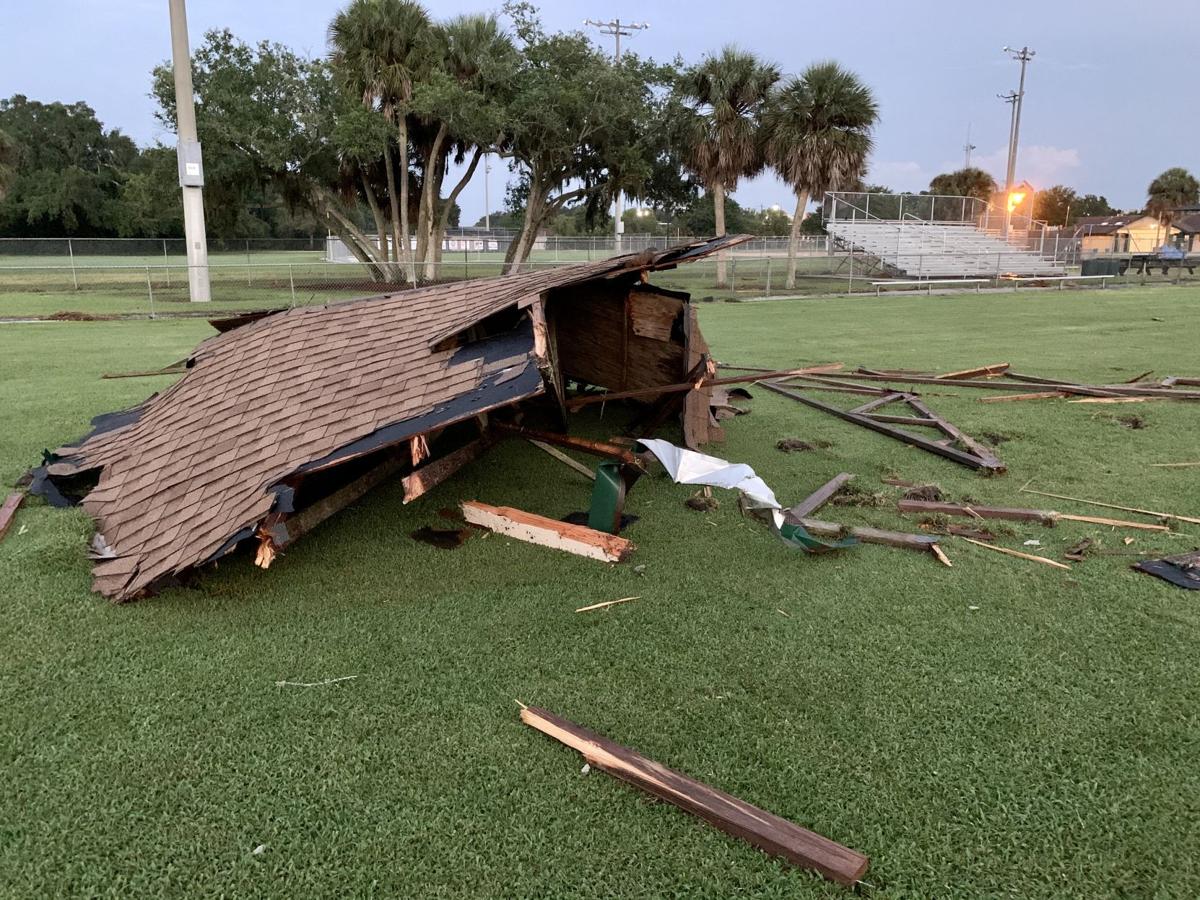 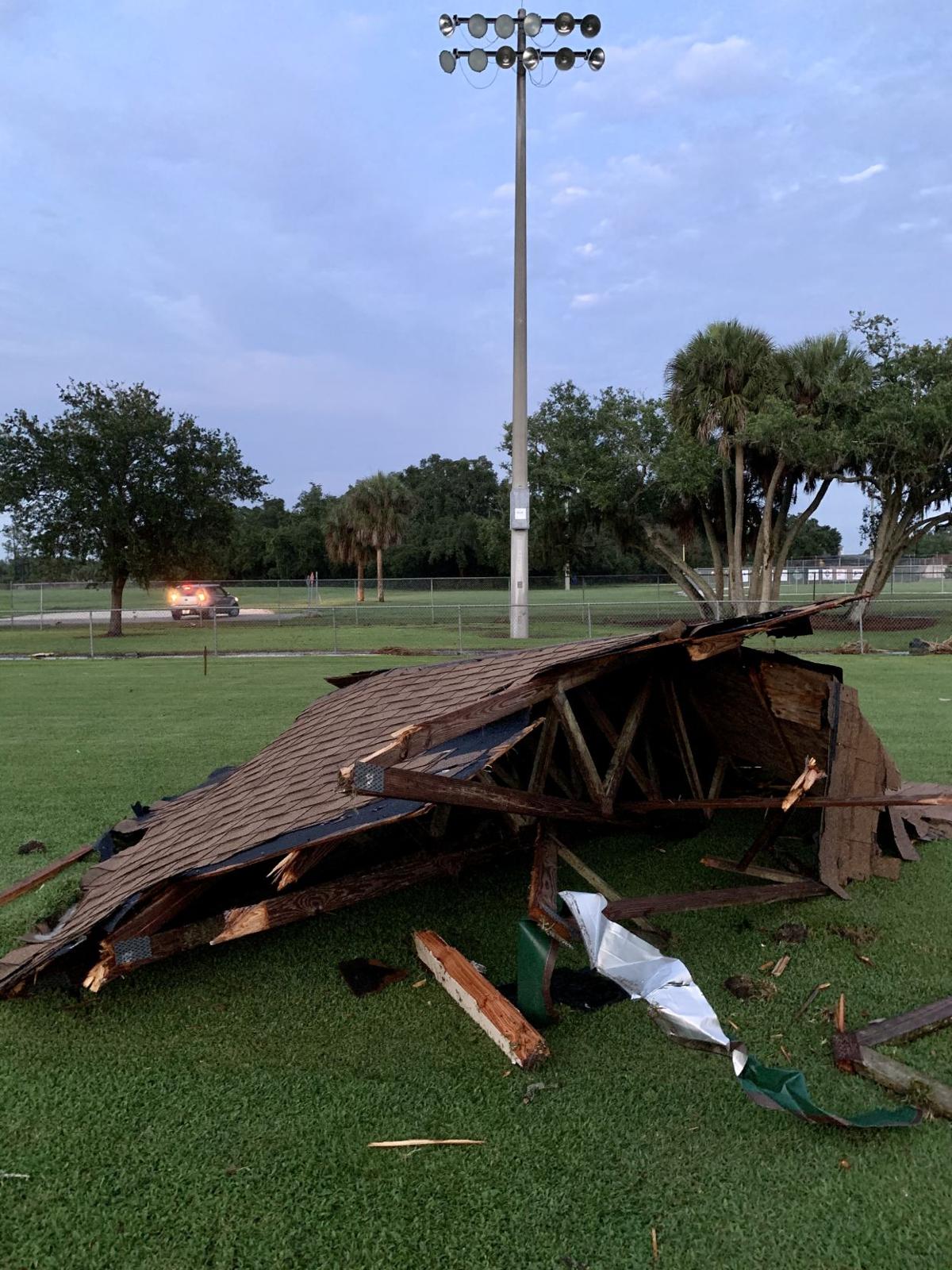 A storm that included a tornado damaged athletic fields at Wellfield Park on Monday night.

An apparent funnel cloud or tornado comes down from the sky on Monday evening about 5:50 p.m., according to Lindsey and Jason Hutchison, who took video of the weather event while in their car at Wellfield Park in Venice.

A storm that included a tornado damaged athletic fields at Wellfield Park on Monday night.

VENICE - Video taken at Wellfield Park off Pinebrook Road shows what appears to be a funnel cloud and tornado that damaged the dugout and other buildings.

Early thoughts focused on the possibility of a microburst at a nearby Publix - but the park is close to the Venice Commons supermarket.

"We started getting some video in that it was clearly a tornado," NWS meteorologist Dan Sobien said. "It was those videos - and it was very clear it was a tornado."

One of the videos, from Venice resident Lindsey Hutchison, was taken while she was in a car with her family when they witnessed what they believe was a tornado.

Nolan Hutchison, 10, told his parents about something odd in the sky.

"My son saw what he thought was a fire coming over the treetops," Lindsey Hutchison said. "It dropped right in front of us coming across the ball field."

The two-minute video shows the apparent funnel drop down close to the ground and then scrap back up. Lindsey and Jason Hutchison are heard talking about needing to call the National Weather Service, athletic coaches and, finally, her mother.

"I'm shaking so bad," she says during the video.

Moments later, several cars and trees were damaged by a windstorm at the Venice Publix at Venice Commons.

No injuries were reported Monday night.

Lindsey Hutchison said her family noticed a strange shift in the weather prior to the tornado. But there was no "loud noise" that often is said to accompany a tornado.

"My husband literally said 'It looks like a wall of rain coming toward us,'" she said.

Jason Hutchison said everything seemed "pretty calm" prior to it. But it was odd.

"When the storm was coming in, I told my friends it looked pretty crazy. The sky was real green in some spots. There was a lot of turbulence in the air up there," Jason Hutchison said.

When he saw it, he said he knew what it was.

"This was definitely a tornado," Jason Hutchison said. "We all couldn't believe how quick it happened."

He said it went south by southwest — toward Venice Publix.

"I threw the car in reverse very quickly," she said.

Along with dugouts, the soccer fields and football field were damaged.

There wasn't a loud noise, she said.

As of late Monday, a full report on the weather event hadn't been released.