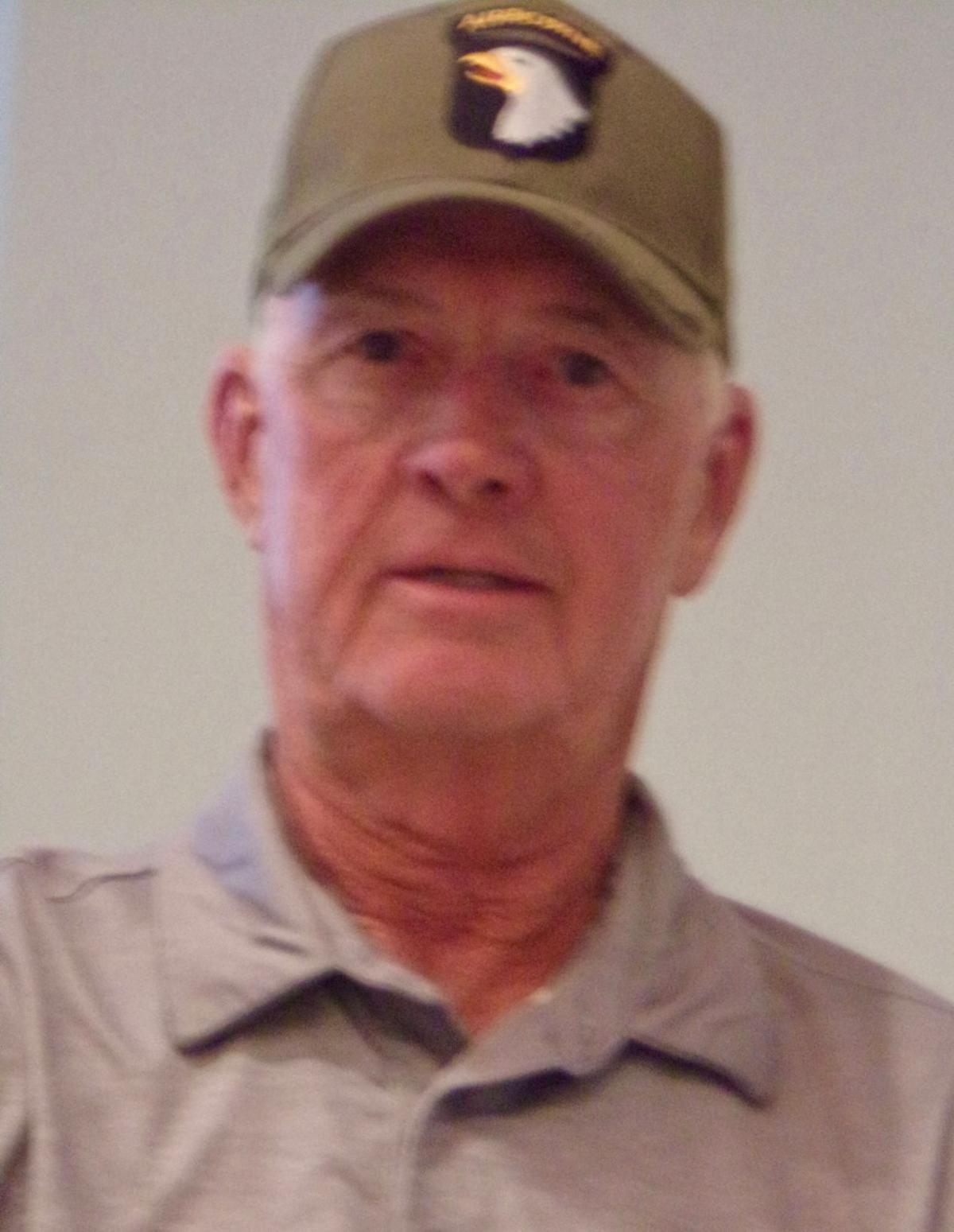 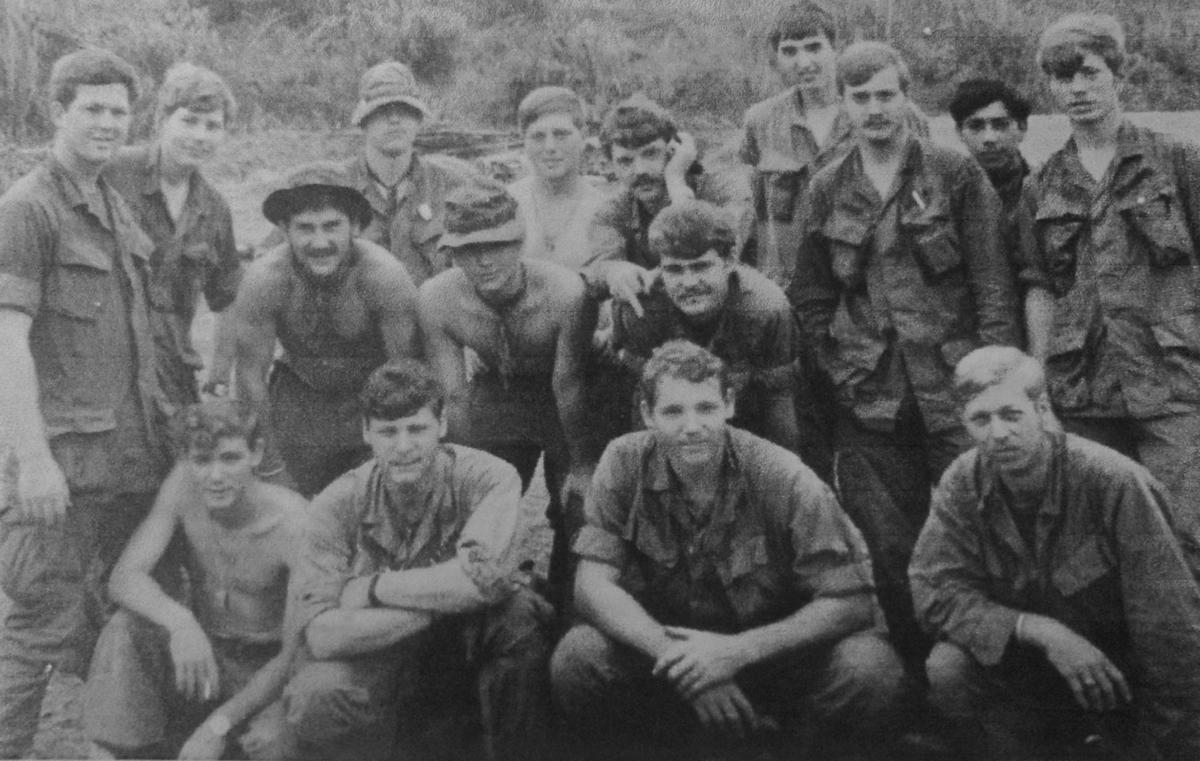 This is Howard Catley’s platoon in Vietnam. These are the men of the 101st Airborne Division he fought with during the war. He has remained close with a half dozen or so of them over the decades. Catley is furthest to the left toward the back with dark hair.

This is Howard Catley’s platoon in Vietnam. These are the men of the 101st Airborne Division he fought with during the war. He has remained close with a half dozen or so of them over the decades. Catley is furthest to the left toward the back with dark hair.

Shortly after graduating from the University of Rhode Island in ’69 with an education degree in hand and second lieutenant bars on his shoulders, Howard Catley was sent to Vietnam with the 101st Airborne Division — the fabled Screaming Eagles.

Catley is now a Venice resident.

“I flew into Biên Hòa in October, and we were trucked to Camp Evans in I-Corps. We were to be two-year replacement soldiers,” he recalled almost 50 years later. “I was with the 3rd Battalion, 187th Regiment of the 101st Airborne Division. We were air mobile.

“I was put in a mortar platoon as my first assignment. Three days later, 3rd Platoon needed a replacement and I was it,” Catley said. “We went out on patrol in triple canopy jungle. One of the regulations were: ‘Don’t shoot unless you’re shot at.’

“The first shooting instance that comes to mind: We set up a base camp one night in the jungle. In the middle of the night, I woke up and the enemy had compromised our perimeter. Shots were coming from inside our perimeter.

“Their sackers came through our lines and headed for the command post. They didn’t make it. We ran them out.

“Fortunately my platoon held its position. The enemy had broken through our lines at the platoon next to ours,” Catley said. “The next morning, we loaded seven body bags into a chopper and they were flown out.

“Three days later, I was given the job as a scout and I was sent out with my radio operator to lead my platoon. We were out in the jungle about 150 yards in front of my platoon. I was checking out some little foxholes when we started receiving fire from the brush in front of us.

“All of a sudden I felt a sharp pain in my head and I dove into one of the fox holes and got stuck in it head first. I couldn’t pull myself out of the hole and I had no idea where my radio man was. Because of the enemy fire, our platoon moved up to our area and found me still stuck in the foxhole. Our first sergeant, with a lot more front line experience than I had, pulled me out.

“The first sergeant found an unexploded enemy grenade beside the foxhole I was in. He pulled the pin and tossed it in the hole and it exploded.

“My helmet had a hole in the side where an enemy bullet entered, then circled between my steel helmet and helmet liner and came out the front. I only had a small wound on one side of my head. They bandaged me up in the field, put me on a helicopter and sent me back to base camp for further treatment.

“The helicopter I was on was diverted to another landing zone to pick up a badly wounded infantryman. He was a young black soldier with one leg blown off and the other one was badly damaged. When we landed and picked him up, he was in shock but talking to me. He told me when he got home he was going to play professional basketball. I assured him he was going to be just fine.

“At this point, let’s fast forward 20 years. I’m watching a TV show with my future wife, Robyn. By this time I was a teacher and football coach at Lincoln High School in Lincoln, R.I. A picture of this black guy comes on the screen showing him with two prosthetic legs and feet. Speaking for DuPont, he talks about his artificial legs which they made. He told his story of how he lost them in a firefight in Vietnam 20 years earlier.

“I realized he was the black infantryman they picked up from the battlefield and put in the helicopter with me. By then he was working for DuPont selling their new prosthetic legs on TV and promoting the fact they changed his life.

“I called the TV station and caught him before he left. His name, I never knew until I saw him on TV, was Bill Demby. I told him who I was and asked him to come to our high school and talk to our student body. He agreed to come.”

Before Bill went on stage at Lincoln High, he told Catley his story. Demby carried business cards with a photo of himself as a basketball star on the front and his story on the flip side. The way Demby explained it to Catley, “He was standing on the street corner with a beer in his hand being a bum when a black limousine drove up, someone rolled down the window and yelled out: ‘Bill you’re better than this.’ The window went up and off the big black car went.” From that point on I stopped feeling sorry for myself and moved on with my life.”

Demby’s story on the back side of the card was a little different. It reads, “I lost both of my legs when my truck was hit by a rocket in the Vietnam War. At first I was overwhelmed by my loss. Then I decided to take on the challenge of showing people I was not handicapped. I worked with experts in prosthetics to design a pair of legs and feet that would let me do anything I wanted to do. Today, I play basketball, ski and show the world what determination and an understanding of science and technology can do.”

“After he spoke to our student body, I had to get him on another plane to meet another speaking engagement somewhere in the country.”

Getting back to Vietnam, Catley said, “The toughest day I had in Vietnam was the helicopter ride I took back to my platoon where I spent another five months in the field on the front lines waiting to go home.”

When he got back to Rhode Island, it was a year before he found the job at Lincoln High teaching all levels of accounting and coaching football. He spent the next 31 years teaching and 27 years as head football coach at the school.

He and his wife Robyn moved to Venice several years ago and love it.

“All of a sudden I felt a sharp pain in my head and I dove into one of the fox holes and got stuck in it head first...My helmet had a hole in the side where an enemy bullet entered, then circled between my steel helmet and helmet liner and came out the front. I only had a small wound on one side of my head." - Howard Catley, Vietnam veteran

Visit www.donmooreswartales.com for more than 1,000 stories of veterans who grew up or moved to Southwest Florida.

Don Moore's stories are submitted to the Library of Congress and are available online through its official website.