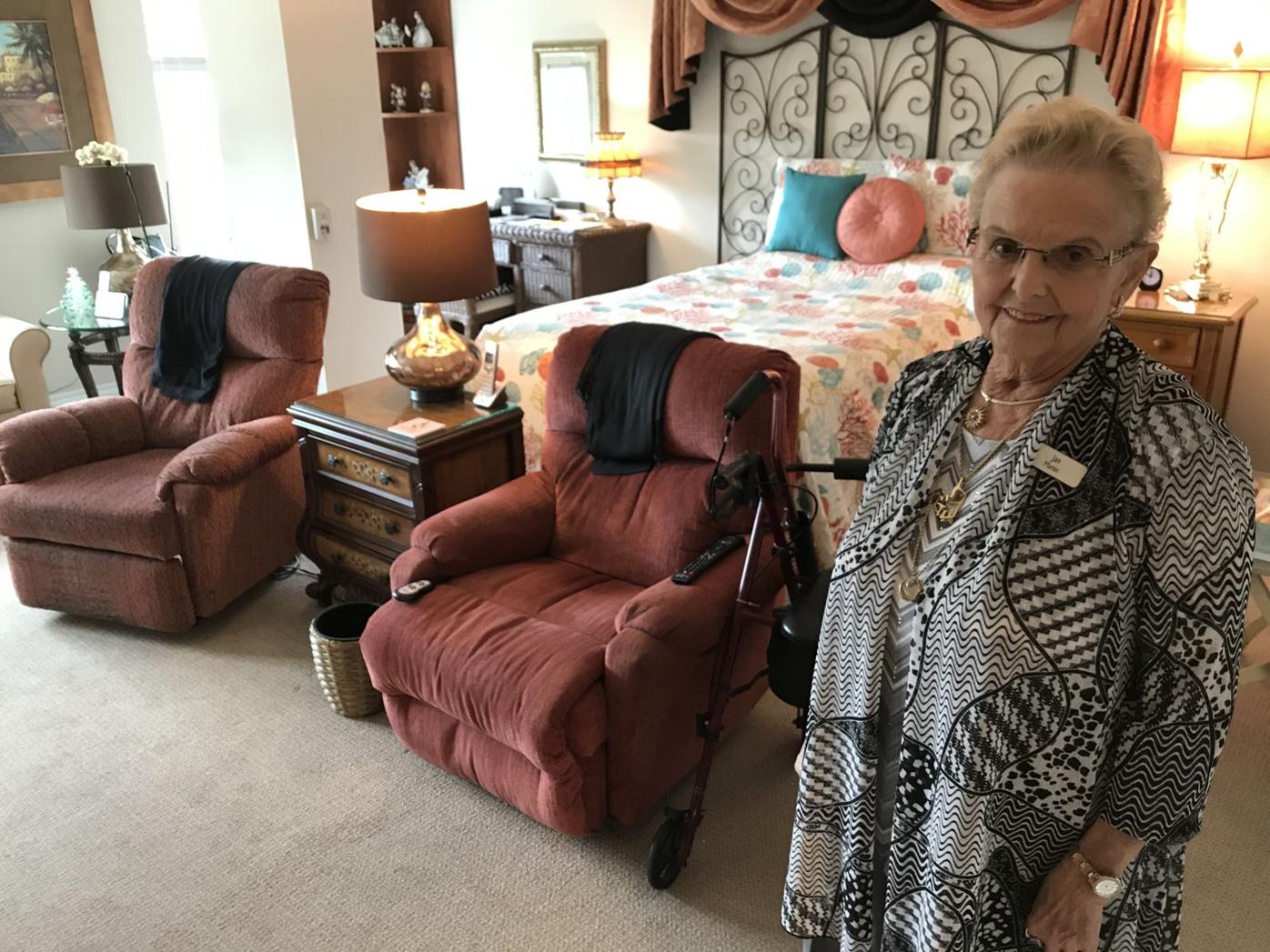 Village On The Isle resident Jan Martin, in her unit in The Lofts, the community’s assisted living facility. She gets her bed made, her laundry done and three meals a day in her unit or communally, with friends. 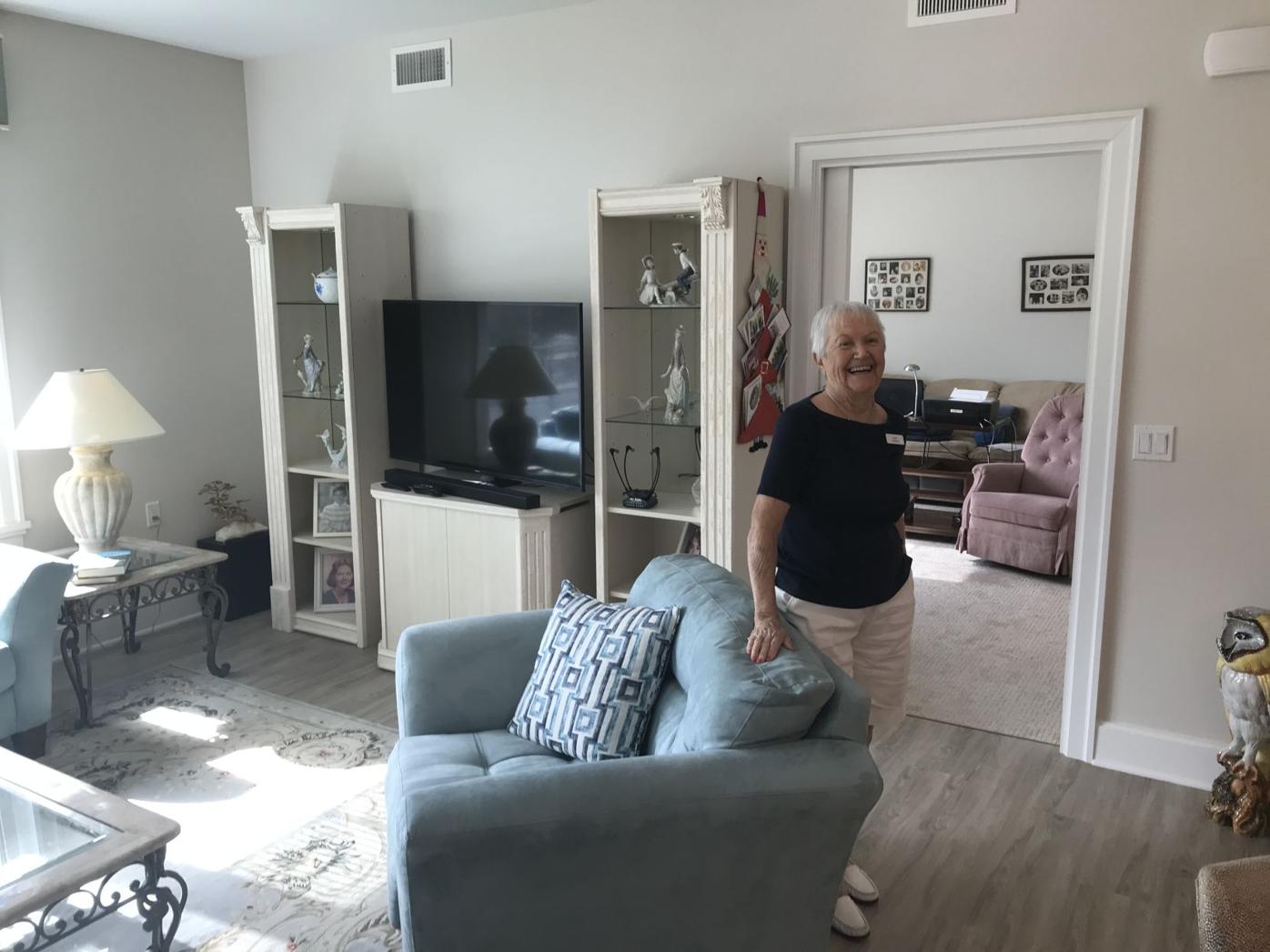 Laura Noschese in the unit in the Emerald Terraces where she and husband, Vic, live. They use their second bedroom behind her as an office but it has a complete bathroom. 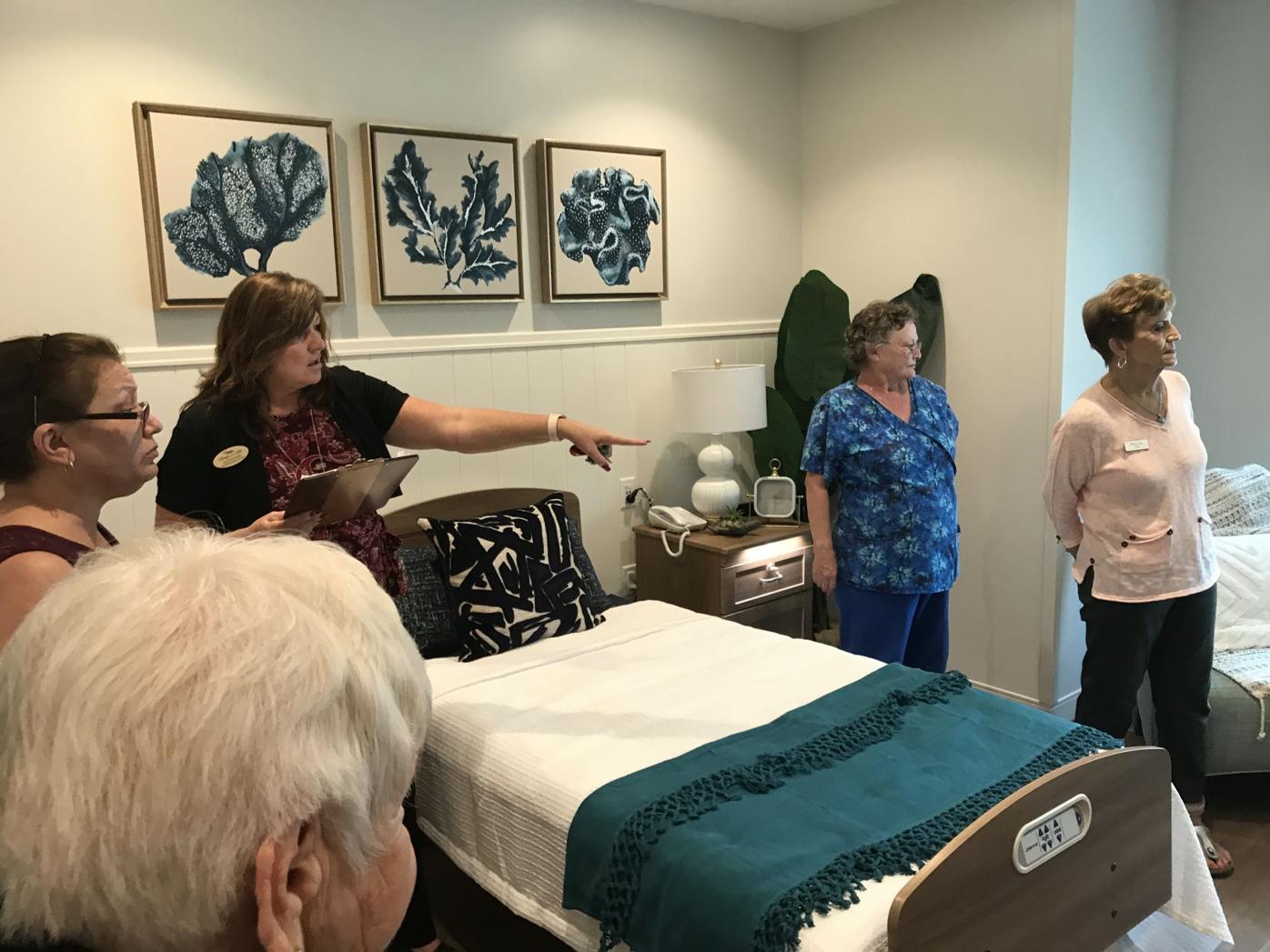 Village On The Isle Director of Sales & Marketing Kristen Myers points out some of the features of a room in the community’s new Health Center to residents on a preopening tour.

Village On The Isle resident Jan Martin, in her unit in The Lofts, the community’s assisted living facility. She gets her bed made, her laundry done and three meals a day in her unit or communally, with friends.

Laura Noschese in the unit in the Emerald Terraces where she and husband, Vic, live. They use their second bedroom behind her as an office but it has a complete bathroom.

Village On The Isle Director of Sales & Marketing Kristen Myers points out some of the features of a room in the community’s new Health Center to residents on a preopening tour.

VENICE — Almost two and a half years ago, Village On The Isle CEO Joel Anderson announced ambitious plans for a nearly complete makeover of the continuing care retirement community’s campus.

Two new independent-living towers would be built. Its assisted-living facility would be remodeled. Its nursing home would be replaced.

And entering 2020, that’s exactly what has happened, with more to come.

The makeover is part of an overall project involving about $100 million in improvements.

Jan Martin, a retired nurse practitioner who moved to VOTI about 10 years ago with her husband, said she was “overwhelmed” by how beautiful it is — especially the natural light let in by large windows.

Picking VOTI was “the best adult decision we ever made,” she said, as it allowed her to remain in independent living after her husband died, then transition to assisted living last June.

Now, she said, she has the new Health Center awaiting her if she needs it.

She had a 100-day stay in Luke Haven, the former nursing home, a few years ago following surgery and had to share a room and a bath with a long-term care resident in declining health.

When it opens later this month, residents in the new Health Center will have their own rooms and baths — and more privacy.

When the door is open someone passing by can see into the room but not see the bed.

The changes reflect that the focus is now being put on what the residents want, Martin said.

“My family won’t ever have to worry about me,” she said.

The Health Center carries over the new design of the assisted-living facility, now known as The Lofts: units arranged like little neighborhoods instead of the hospital-style appearance many think of as the stereotypical nursing home.

There are two 16-unit neighborhoods on both the second and third floors, with some common areas on each.

Meals will be provided from the main kitchen on the ground floor, though there are kitchens on the resident floors as well.

“I could kick some serious culinary butt in this kitchen,” one visitor to the third floor was overheard to say.

The Health Center also has a fitness room and a beauty salon, though residents can use the facilities elsewhere on the campus as well.

In addition, the Center shares interior design elements with both The Lofts and the Emerald Terraces, the new independent-living buildings, so transitioning to higher levels of care will be easier, said Kristen Myers, director of Sales & Marketing.

The new 46 independent-living units in the Emerald Terraces towers opened to residents in June and August and are 100% sold and 93% occupied, Myers said.

Vic and Laura Noschese have a two-bedroom, two-bath Coral Residence of 1,460 square feet — several hundred square feet larger than the original independent-living units, Myers said, and in the middle of the new options, which range from 1,200 to 1,620 square feet.

The Noscheses sleep in one bedroom — the one that has the full-size washer and dryer in it — and use the other for their office. It could be a separate suite, however, depending on the residents’ preferences.

Each unit has a terrace and both towers have under-building parking with a private entrance and community space, a fitness center and an open terrace on the top floor.

The original independent-living units in Matthew and Trinity halls are being upgraded and the exterior will be painted to match the Emerald Towers.

Anderson said that bringing all these projects to fruition at practically the same time has been “a journey” for the community, which is an affiliate of the Evangelical Lutheran Church in America.

At the outset, he said, the journey involved some resident opposition to the scope of the changes that were to be made on the campus.

VOTI’s board of trustees might not have been so bold if the community weren’t landlocked, he said, with land elsewhere on the island available only at a price the nonprofit couldn’t justify paying.

The groundbreaking for the Health Center was the game changer, he said, bringing the skeptics around.

More work is planned, he said, but on a smaller scale. The Renaissance and Hibiscus dining rooms are going to be upgraded and there are the plans for the older independent-living units to be carried out.

Luke Haven is in for some changes as well, he said.

Part of the building will likely be demolished to make room for more parking, while the part that remains may be destined to become a clubhouse of sorts.

A resident already has the equipment for an expanded woodworking shop, he said, and there’s interest in a larger art studio and a crafting area.

There might also be space for a multipurpose room for programs and classes, he said. And the building’s garden needs to be preserved, he added.

That’s fitting, since Anderson sees his staff’s job as cultivating VOTI’s mission of “sharing God’s love by promoting individual growth and dignity, enhancing the quality of life and meeting the spiritual needs of our residents, staff and community.”

Residents have differing needs and wants, he said, but there’s one thing VOTI can provide all of them.

"My family won't ever have to worry about me." - Jan Martin, VOTI resident