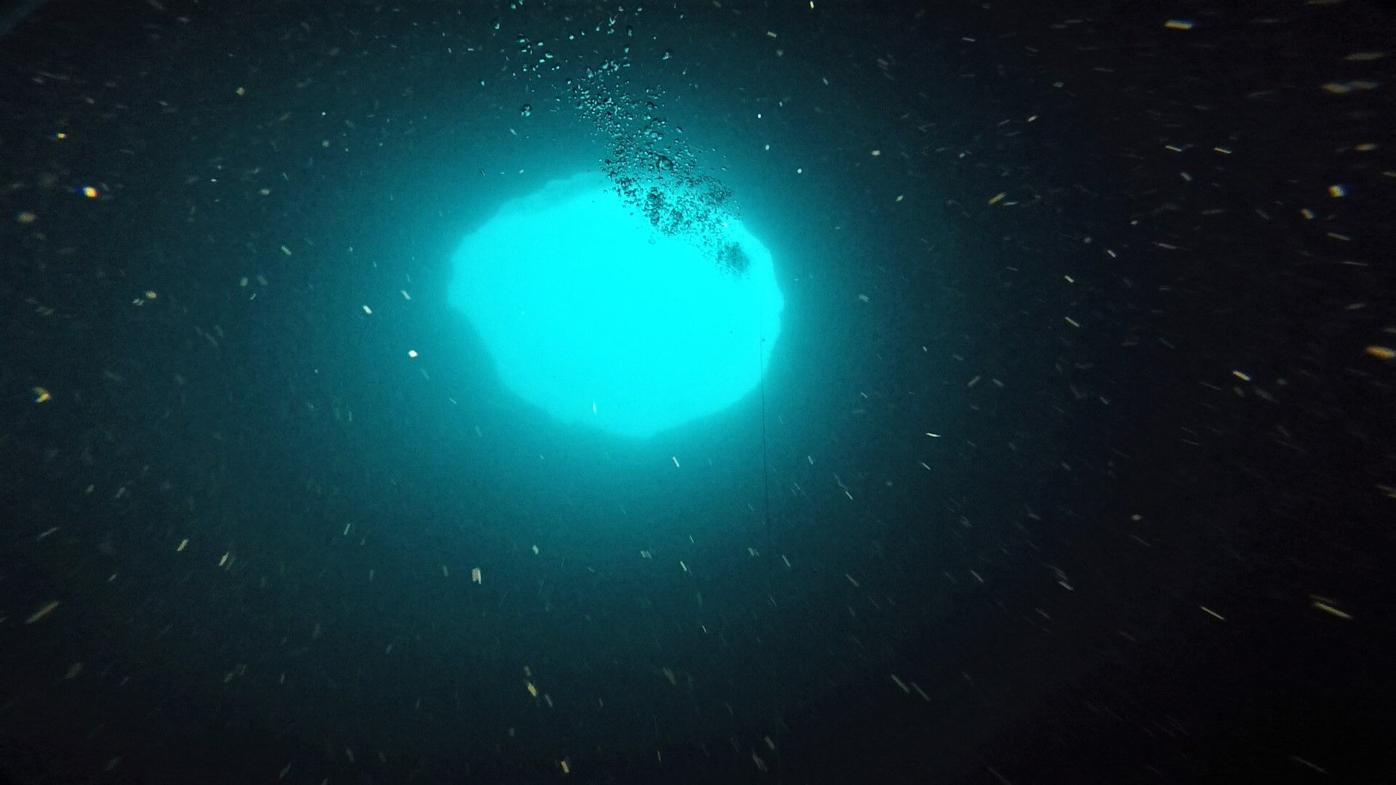 A diver’s view looking up to the opening of Amberjack Hole. 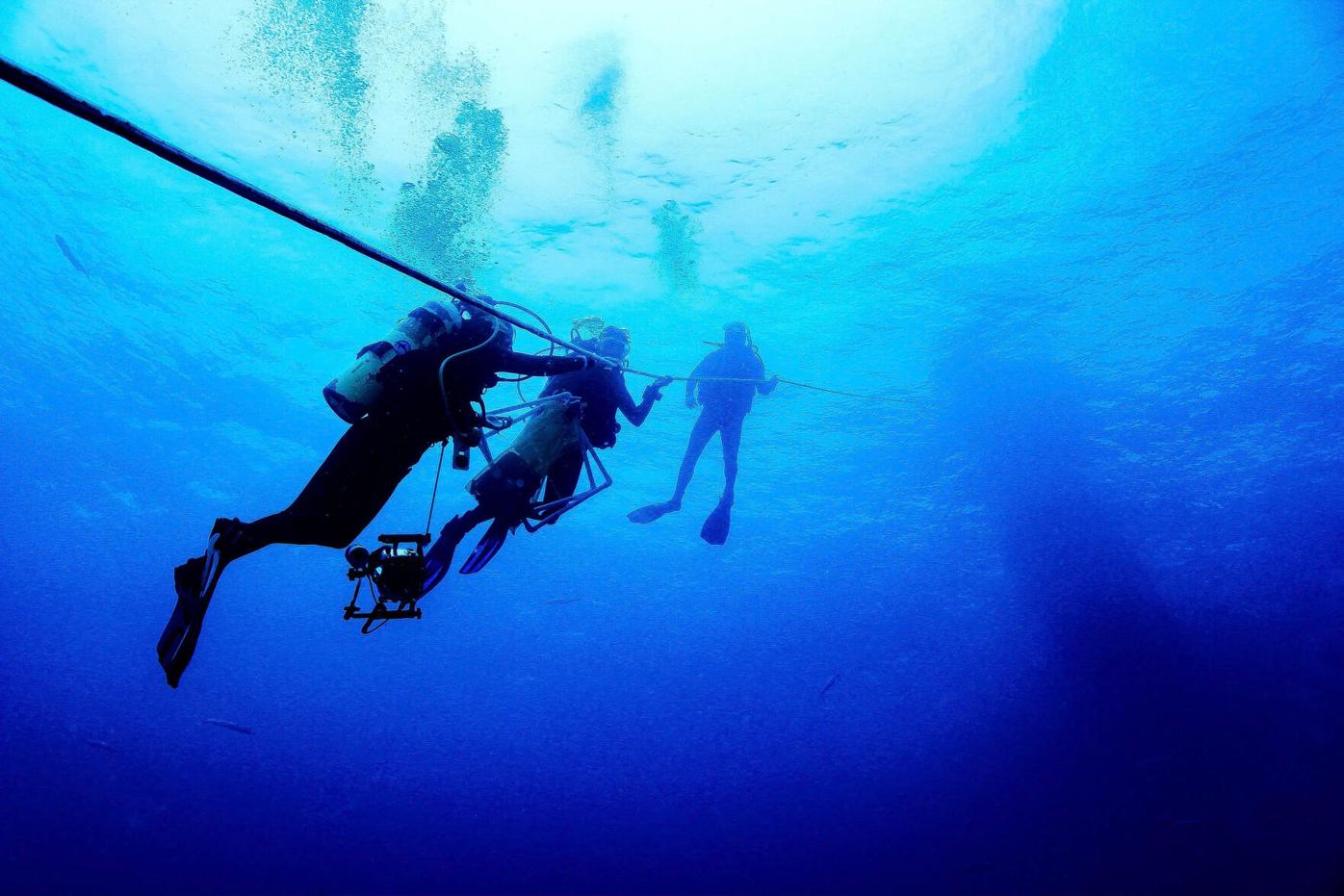 Above: Mote Marine scientists dive to a blue hole in 2016 off the coast of Captiva Island. 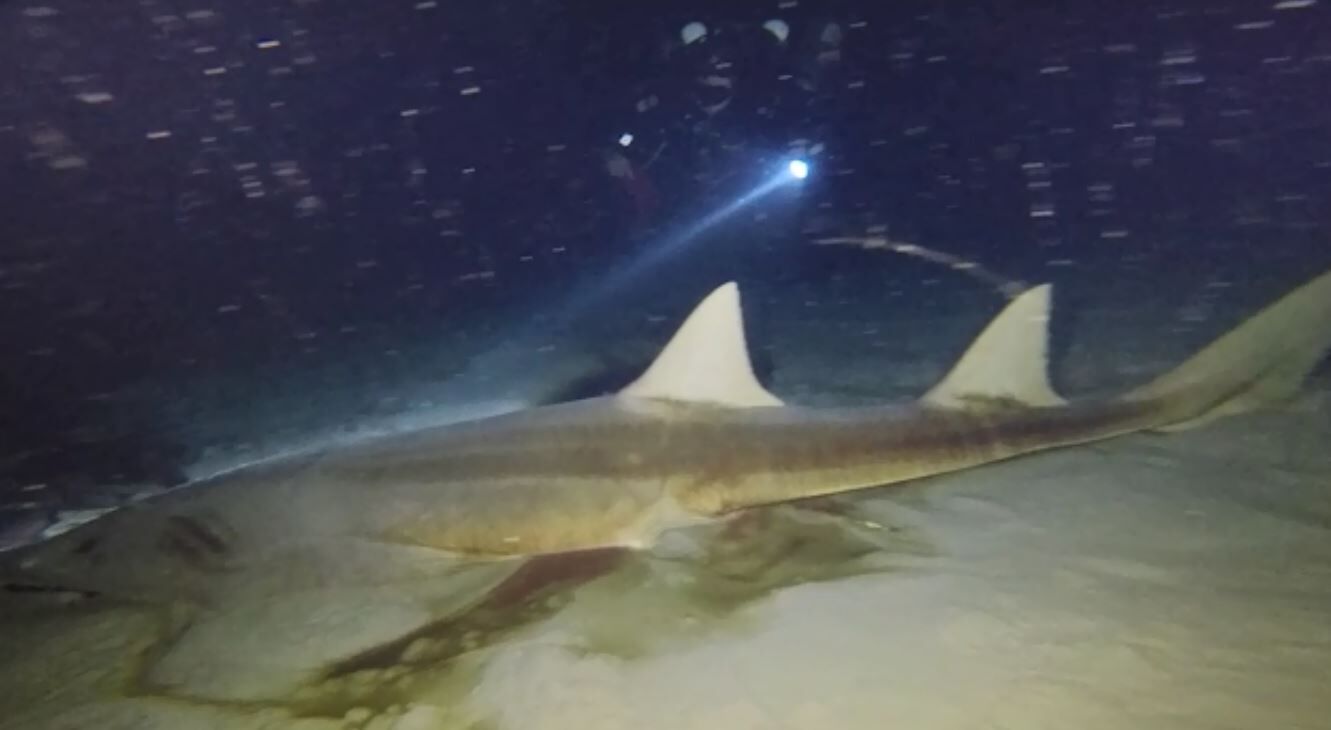 Right: A diver looks at an endangered smalltooth sawfish dead but intact after it was pulled from the bottom of what is called the Amberjack Hole in 2019 about 30 miles west of Sarasota. A deeper hole, the Green Banana, is set to be explored in August and then again in May 2021. 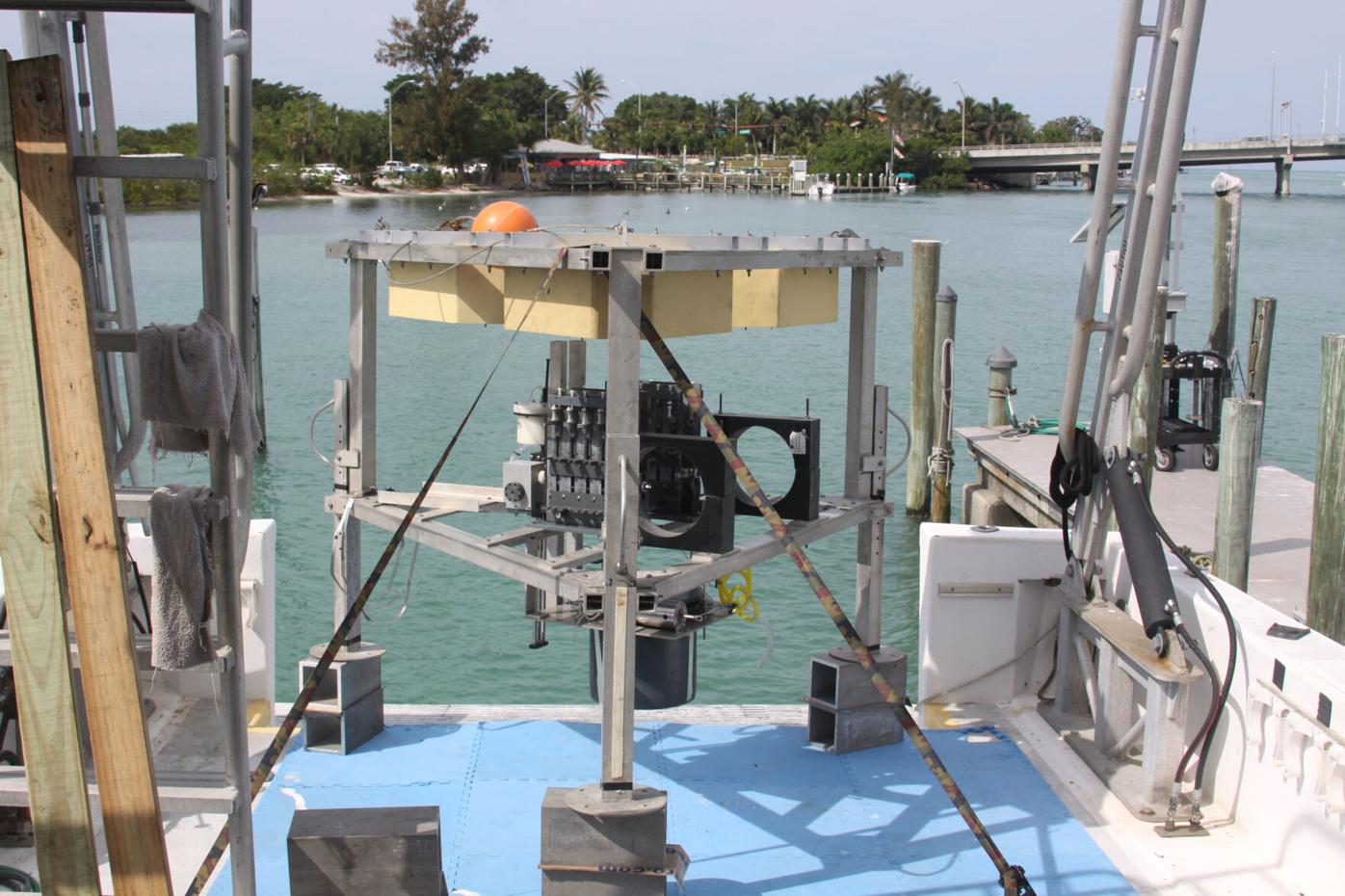 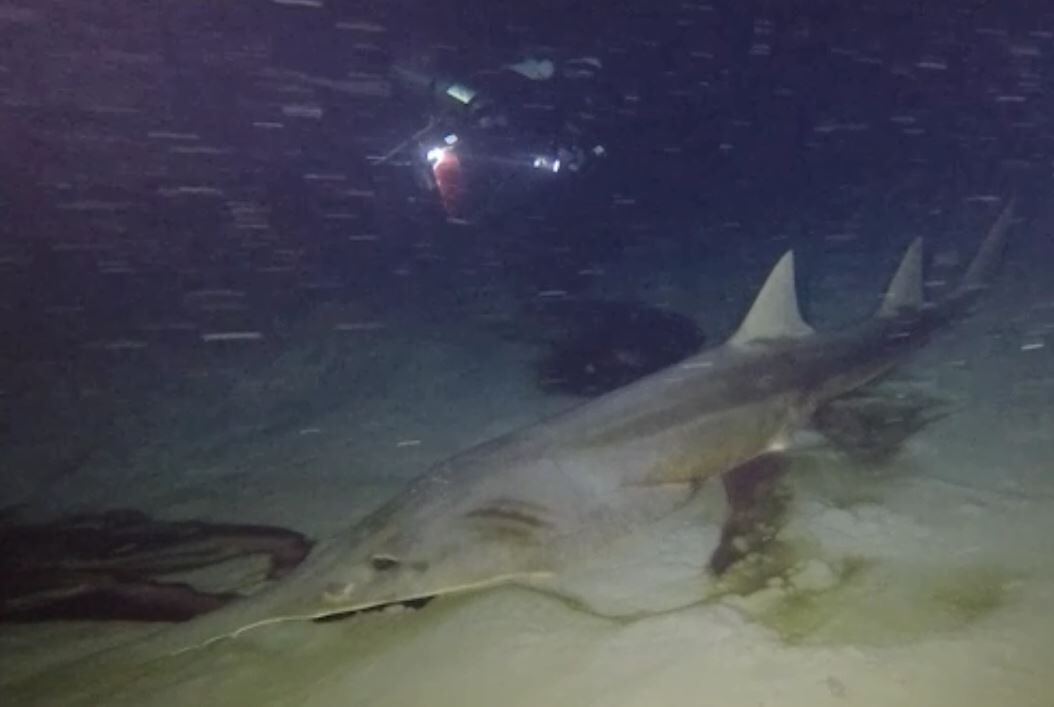 A diver looks at an endangered smalltooth sawfish dead but intact after it was pulled from the bottom of what is called the Amberjack Hole in 2019 about 30 miles west of Sarasota. A deeper hole, the Green Banana, is set to be explored in August and then again in May 2021.

A diver’s view looking up to the opening of Amberjack Hole.

Above: Mote Marine scientists dive to a blue hole in 2016 off the coast of Captiva Island.

Right: A diver looks at an endangered smalltooth sawfish dead but intact after it was pulled from the bottom of what is called the Amberjack Hole in 2019 about 30 miles west of Sarasota. A deeper hole, the Green Banana, is set to be explored in August and then again in May 2021.

A diver looks at an endangered smalltooth sawfish dead but intact after it was pulled from the bottom of what is called the Amberjack Hole in 2019 about 30 miles west of Sarasota. A deeper hole, the Green Banana, is set to be explored in August and then again in May 2021.

VENICE — Mote Marine scientists and collaborators are heading deep into the Gulf of Mexico to find out what’s going on below.

So far, 20 “blue holes” have been discovered, but experts believe there may two to three times that amount.

Last year, scientists started looking into the Amberjack Hole about 30 miles west of Sarasota. Next month, they are going to Green Banana Hole, about 50 miles west of Venice.

Inside Amberjack, explorers were able to see the bodies of two sawfish and, after receiving necessary permissions for handling the body of an threatened species, extracted one — a 12-foot specimen.

Two things have captivated scientists about the sawfish: These types of fish aren’t normally so far out at sea and dead fish tend to fall apart quickly. Not in this case.

“To find such an intact and not yet decomposed specimen is very interesting,” Kettle said.

The 2019 exploration of Amberjack was highlighted in the PBS Changing Seas series episode “Florida’s Blue Holes: Oases in the Sea.”

What are blue holes?

There are theories as to what the blue holes are.

According to Mote, they are basically underwater sinkholes, similar to normal sink holes.

“They vary in size, shape and depth, but most are ecological hot spots with a high diversity of abundance of plants and animals,” the facility says on its website.

It is unclear if the could somehow be connected to sinkholes in Florida — or perhaps even have a connection to the Florida aquifer, Kettle said. The United States Geological Survey is looking at radioactive isotopes to examine that possibility.

“They are very similar to mainland Florida springs,” Kettle said.

Along with USGS, Mote teams up with FAU Harbor Branch, NOAA and Georgia Tech for the explorations.

While 20 have been confirmed potmarking the Gulf of Mexico along Florida’s West Coast, Kettle said scientists suspect 40 to 60 may exist.

Most of them have been discovered by fishermen and recreational divers — but not scientists. Some are so deep and spread out that it is currently impossible to find them by satellite.

The mission is to see what is going on in the blue holes, that the website described as “an oasis in an otherwise barren seafloor.”

“Blue holes are diverse biological communities full of marine life, including corals, sponges, mollusks, sea turtles, sharks and more,” the website notes. “The seawater chemistry in the holes is unique and appears to interact with groundwater and possibly aquifer layers. This link contributes to the knowledge of carbon cycling between surface and groundwater.”

• If a blue hole secrets nutrients and affects “an area’s primary production.”

• If microenvironments have new species of microbes.

• If Amberjack or others should become protected areas.

How will the dives work?

Divers and volunteers will head out from Mote Marine in Sarasota to Green Banana starting — preliminary — in late August. Most of the work is weather-dependent.

The team will again include NOAA, USGS, FAU and Georgia Tech.

“It’s a little dangerous,” she said.

Going 50 miles off Venice and then diving deep will take time. They will be leaving every morning and returning every night for about a week, Kettle said. And then they will return to Green Banana in May.

“The configuration of the hole is somewhat hourglass shaped, creating new challenges for the lander deployment and water sampling,” Mote Marine said on its website.

Along with the divers, they will be taking scientific equipment out with them for the Green Banana exploration that will collect water and sentiment samples.

Green Banana starts at 155 feet below the Gulf of Mexico. Green Banana’s bottom, however, is about 425 feet farther down into the depths.

“Some of this is really exploratory so we don’t know what we’re going to find but we’re looking forward to finding it,” Kettle said.Amberjack and Green Banana

While Green Banana will be explored, scientists are already looking at what Amberjack provided, aside from the sawfish.

Along with divers, the 2019 work at Amberjack included a ‘benthic lander’ — a machine that holds scientific instruments, the website said.

”The team documented life around the rim of the hole and carbon, nutrients, and microscopic life throughout the hole and in its bottom sediments.”

The team returned in September for more water samples.

”Water samples collected by divers and the lander yielded microbes whose DNA was extracted, processed to isolate specific marker genes, and analyzed,” the website notes. “Scientists found that the microbes in the hole are layered, with different genetic varieties at different relative abundances among the top, middle and bottom layers of water. Next, they will sequence the full genomes of the microbes to gain a better understanding of the organisms.”

According to the website: “Analysis of collected samples has also shown that the water and sediment in Amberjack Hole have huge amounts of dissolved inorganic carbon, which can support some kinds of life—including microbes. These microbes may play an important role in the global carbon cycle by returning carbon into the environment in a form that other organisms can access...

”The team was also able to document nutrient flux from the bottom sediment into the water, suggesting that nutrients are coming up from the blue hole, fueling primary production above the hole, and in turn, a whole cascade of larger organisms. And, in turn, some carbon/nutrients ultimately cycle back to the sediments as detritus, fueling additional fluxes and restarting the positive feedback cycle. This could explain why blue holes support such a diversity of life.”

It said water samples show the hole had “naturally occurring isotopes of radium and radon, two markers of groundwater.”

”This suggests that blue holes are not isolated from groundwater and could provide further insights into any potential groundwater connection between the Floridan Aquifer and the Gulf of Mexico,” the website said.