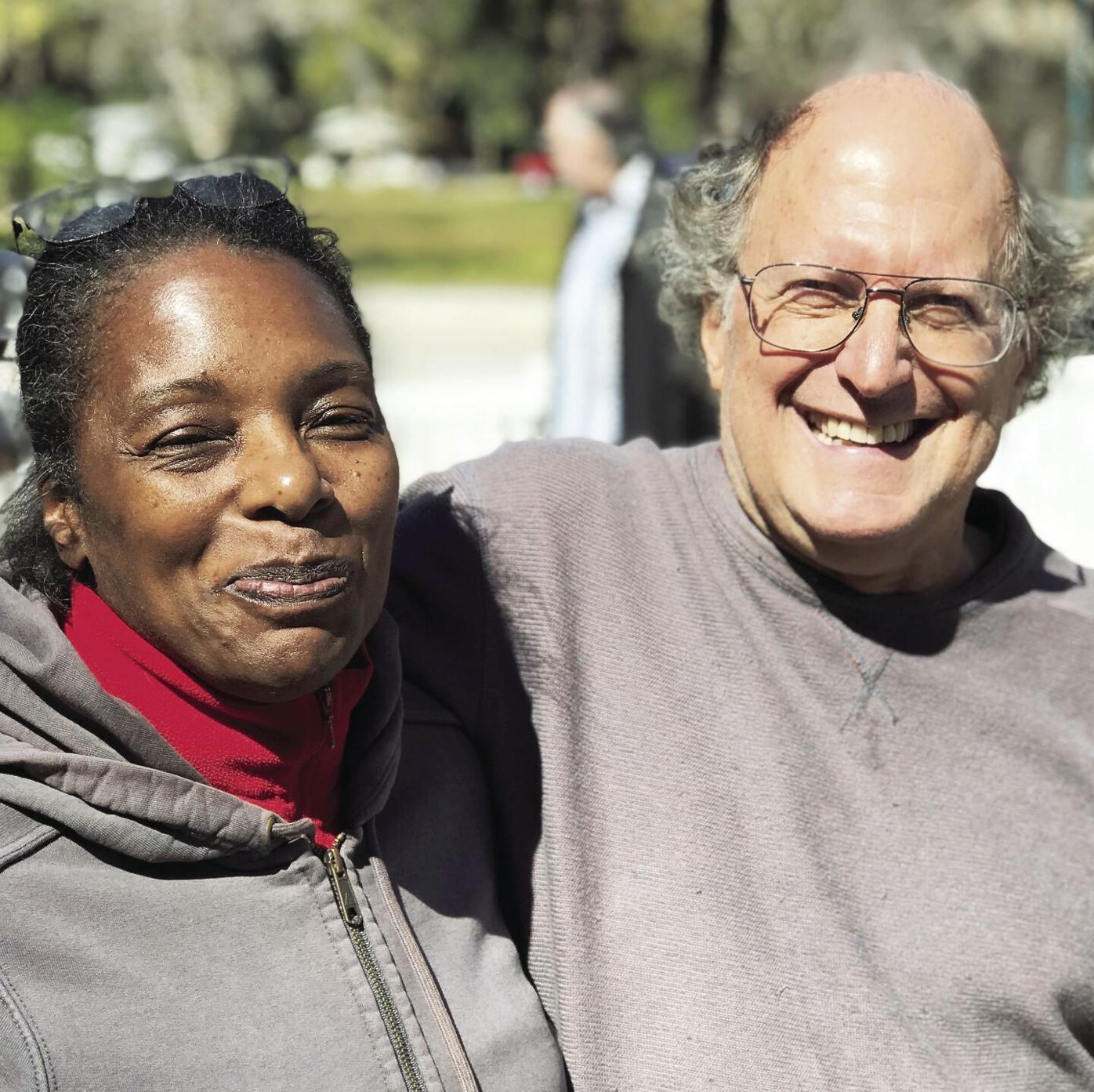 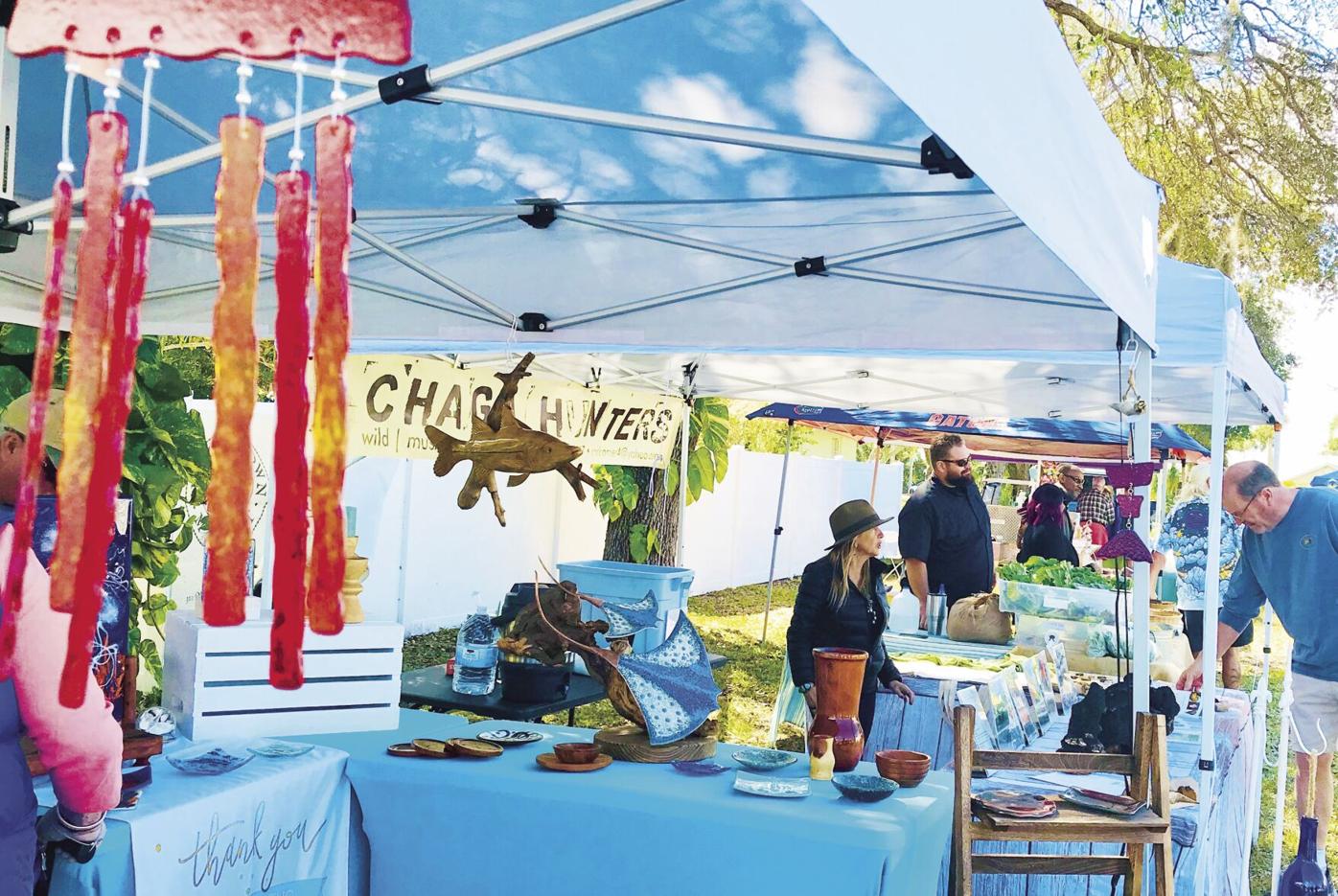 “We have more new vendors every week,” said Judi Jenkins. 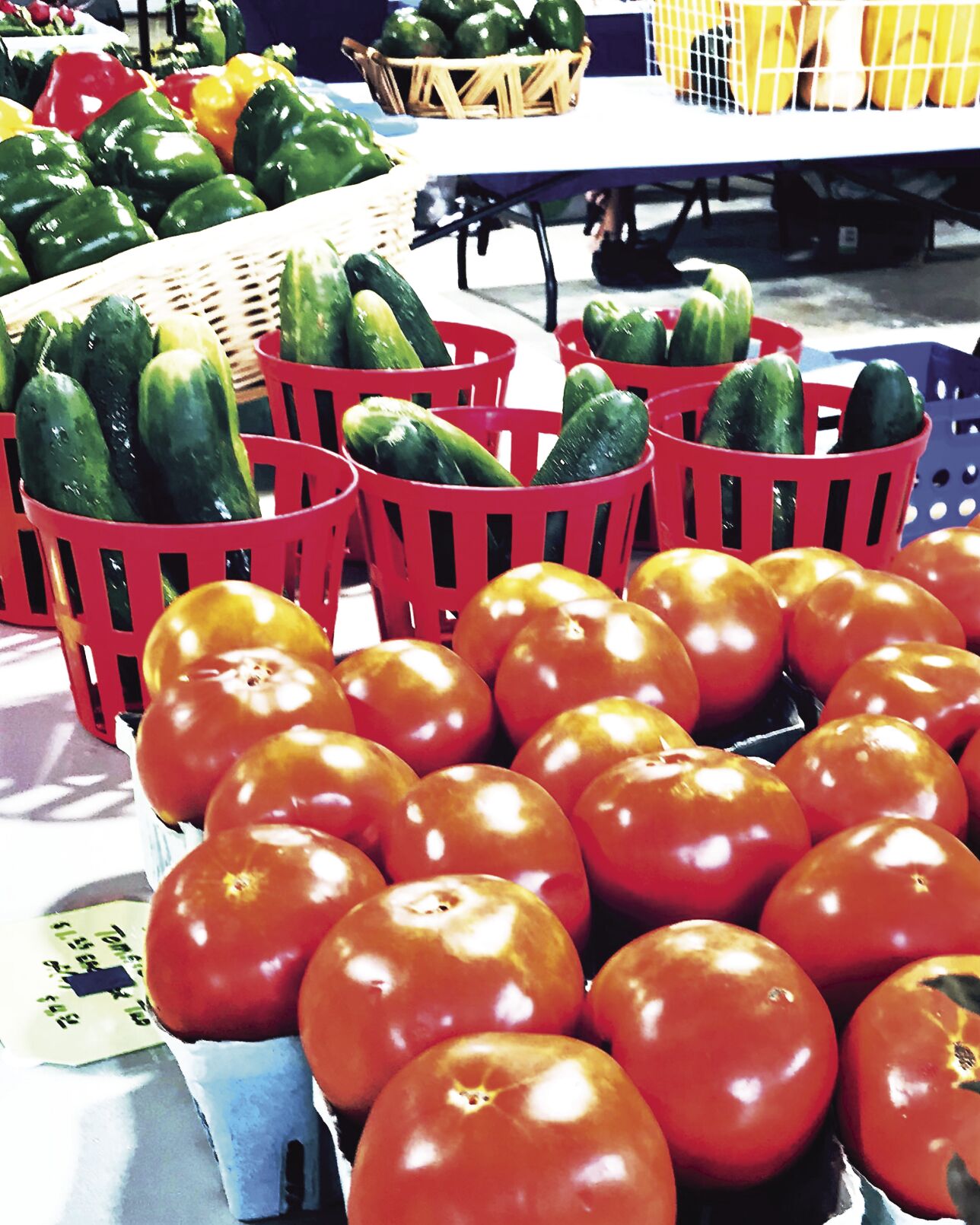 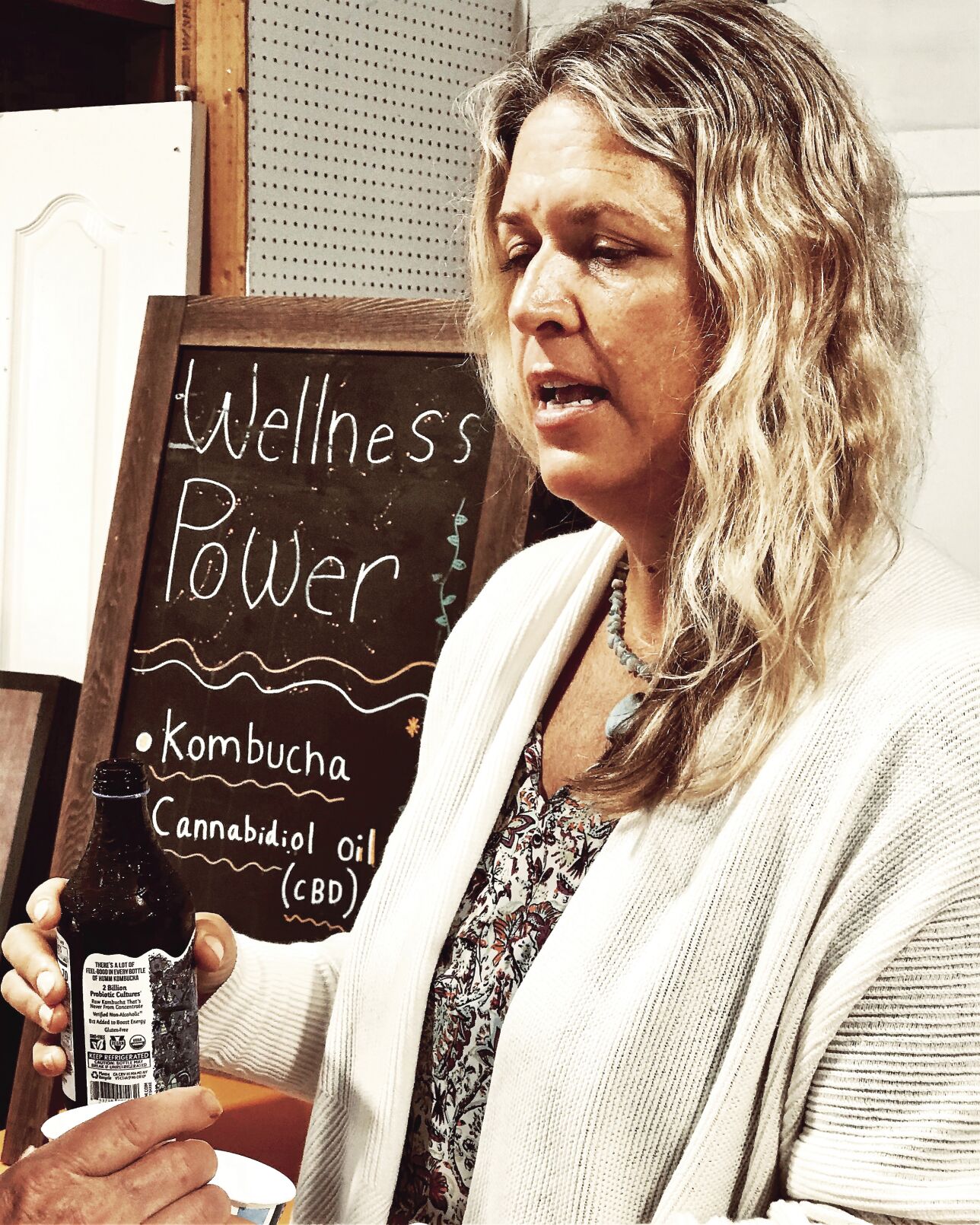 Wellness coach Amelia Jones, MHS, sells kombucha at the farmers market and teaches a six-session course, “Transformative Wellness for YOU, the Caretaker.” 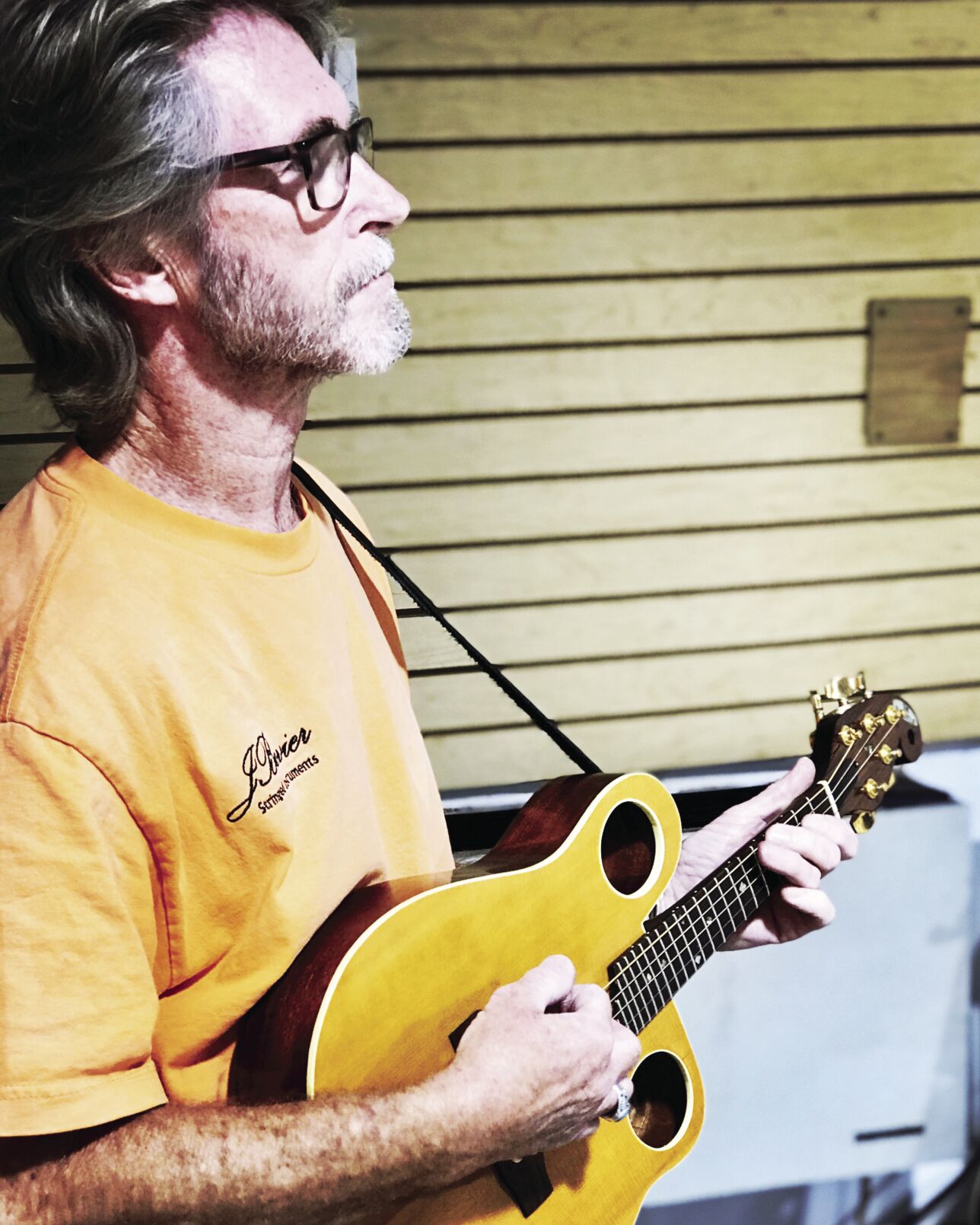 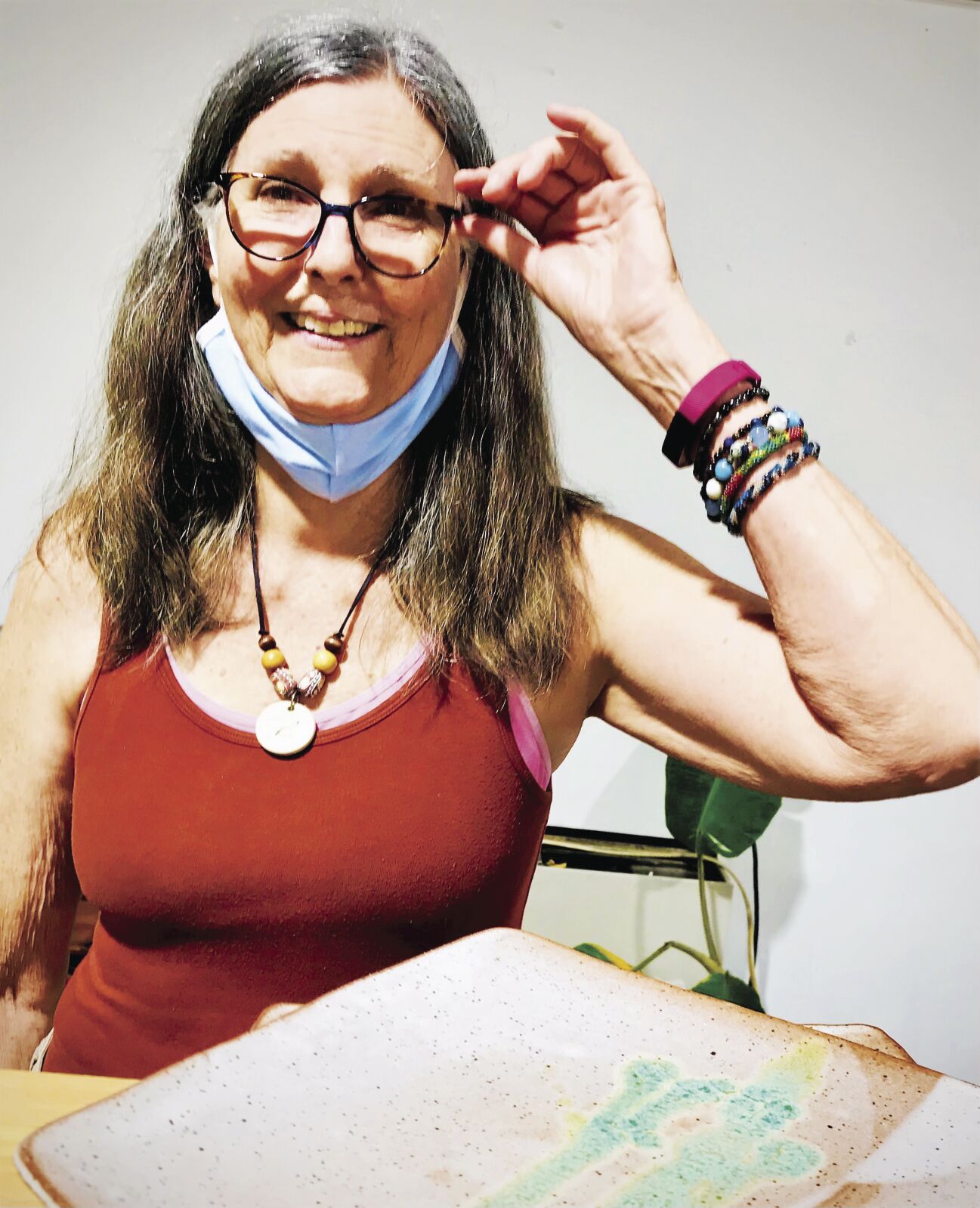 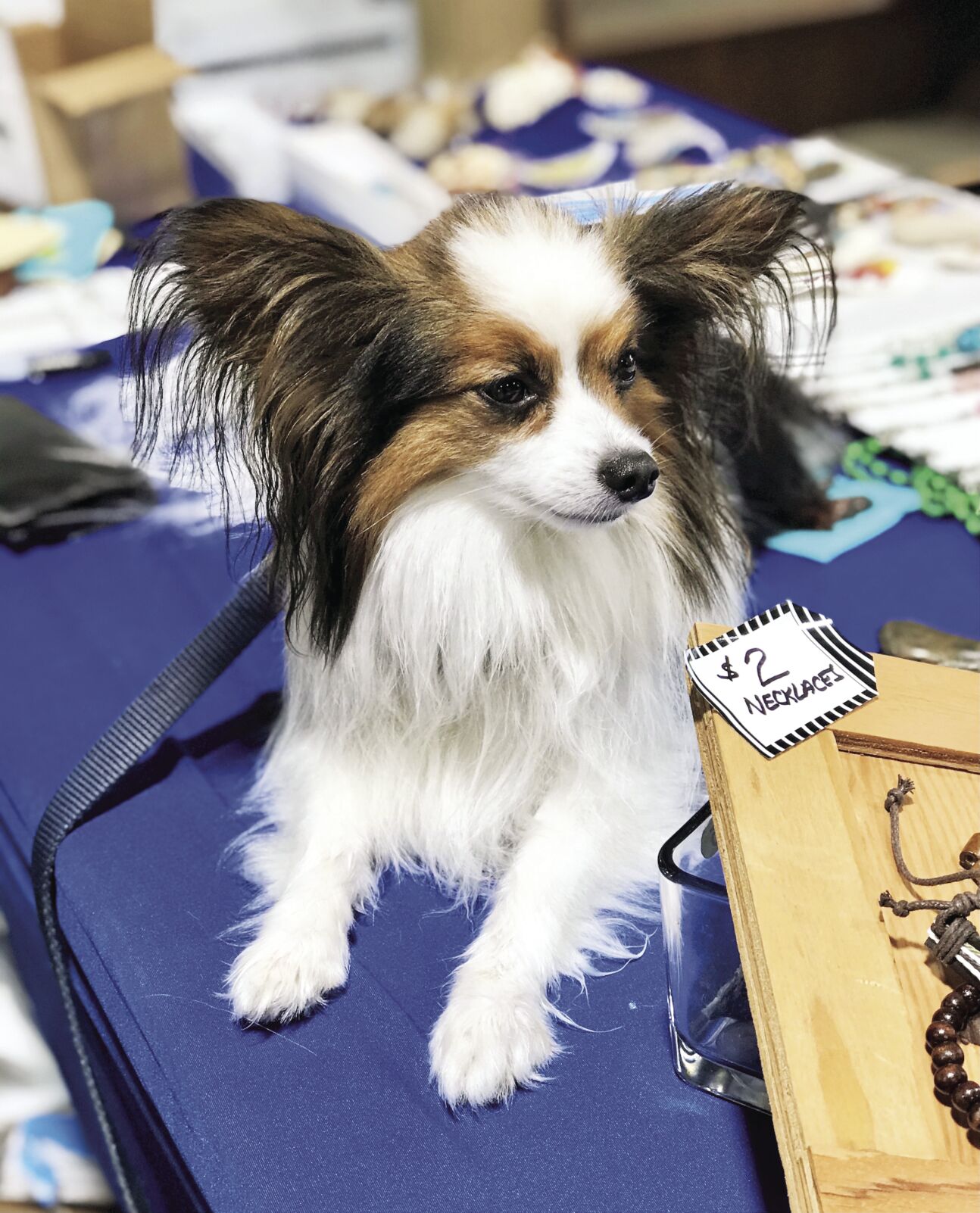 “We have more new vendors every week,” said Judi Jenkins.

Wellness coach Amelia Jones, MHS, sells kombucha at the farmers market and teaches a six-session course, “Transformative Wellness for YOU, the Caretaker.”

Riner knew how to play the guitar and happened to have one in his car, but he’d neither played much in 25 years nor learned the finer points of tuning.

“I’d got busy with other things and let music go by the wayside,” he said. “But in retirement I had the chance to resurrect something I had a talent for but never pursued. There are a lot of people like me, I think.”

Lundgren replied, “It’s an open mic. Anyone can come up and play.”

Lundgren put the Texan’s name on the board and got him up on stage.

The self-deprecating Riner has written his own songs but allows as how nobody would want to hear them because there are so many other “good” songs out there. He’d never played in front of a group before.

“I was just awful,” he groaned. “But people like me, they don’t think they’re ever ready, until somebody like Bill tells them, ‘You’re ready! Now get up there!’

“And I got better after that. Now I’m playing twice a week at the Blue Pineapple.”

A rapidly growing self-improvement movement—now based at The Dearborn Center, 501 West Dearborn Street—embraced Riner and many others like him who’ve learned, “You’re ready! Now get up there!”

All of these formerly underachieving but radiant souls will tell you much the same thing: “I kind of fell into this, and I love it.”

They talk of discovering what they were always meant to do. And their innate talents get a boost from an Englewood couple and their all-volunteer, donation-supported 501(c)3, 509(a)2 public charity for self-actualizers—Life Realized.

It Started with Fireworks

Judi Jenkins and Bill Lundgren know all about turning life around.

On September 11, 2001, Jenkins was in her 14th year as a Verizon manager. Somehow, Verizon’s 32-story headquarters remained standing, though gravely wounded, after its next-door neighbor, 7 World Trade Center, collapsed.

No one in the Verizon Building was injured. But Jenkins lost her job, along with all her clients from World Trade Center tenants Morgan Stanley and Fuji Bank.

She managed to live off savings until 2005. By then completely broke, she went on welfare and lived with friends for a while. Shortly after a six-year career as a Department of Welfare caseworker, a rear-ender mashed her into another car, destroying her work life.

Years later, while challenging herself to travel on her own for the first time since the accident, she met recent widower and former 20-year adman Lundgren while he, too, was braving something new—staging his first professional fireworks show for Martha’s Vineyard’s big Fourth of July celebration.

It was a total romcom.

“For a minute he thought I actually owned a sailboat. Then I ‘fessed up.”

And life became realized for both of them.

After moving to Englewood four years ago, they volunteered at The Open Studio, a creative cooperative on Old Englewood Road where they applied their corporate skills to special programs.

Lundgren, who’d finally found a town where his own and others’ music could flourish, honed musicians’ confidence at Englewood-wide open mic events.

“After we came to Englewood, we quickly realized that everything here is geared toward season. The rest of us wanted things to do all year long.”

So, Lundgren and Jenkins now make sure that, rain or shine, every Sunday all year long and on seasonal Thursdays, Englewood has a farmers market, and that all their programs fall on days and times accessible to working residents, young people and the retired.

Renting The Dearborn Center at 501 West Dearborn gave them more freedom and flexibility than ever.

During the week, the center hosts classes in watercolor, mixed media, art journaling, fermentation, personal wellness for caregivers and more. Because it’s a 2,000-square-foot, open-air warehouse, the center has a COVID-compliant seating capacity of 45.

And now, if it rains, they can move the twice-weekly market indoors.

To Market, To Market

Life Realized’s first event, in early 2020, was a Sunday farmers market and open mic, spread out on the lawn beside the 501 West Dearborn warehouse.

Everyone there has a story.

Pitmaster Shay Vercher lost his home to Hurricane Katrina, but salvaged floating debris from New Orleans Charity Hospital to make the smoker from which he now sells barbecued pork, brisket and chicken.

His waft of apple and cherrywood smoke lures customers all the way down Dearborn—the same way that Englewood’s magic drew him in, years ago.

Soft-spoken woodcrafter Shanon Smart of North Port started bringing his Smart Custom Worx to the market in February. Jenkins said, “He’s self-taught and has been woodworking for only two years. That’s amazing given the quality of his work.”

“Incubating small business entrepreneurs is part of our mission,” she continued. “We mentor several vendors, helping grow their businesses beyond the basic opportunity that the market provides.”

He said, “I’m very particular in what I buy, and whatever isn’t sold goes to the needy.”

Of course he, too, has a life-realization story.

“I’m a General Motors retiree. They took away our benefits, so I had to go back to work at Walmart. They put me in produce, and I loved it.”

Thursdays for an extended season,

Thursdays 5:30 to 8:30 p.m. through April; Free show by The Sidemen classic country and The Gulf Breeze Bluegrass Band

For a fast-growing schedule of weekly classes, go to liferealized.org/events.

A Community of Musicians

No matter what he takes on—advertising, fireworks or open mics—Lundgren wraps what he calls his “engineer brain” around it to make it happen. From the start, the Sunday farmers market included his open mic, which now also has its own night at The Dearborn Center.

Monday nights, things might be jumping at the Englewood Moose Lodge and Zeke’s on the east end of West Dearborn, but the west end is usually black as pitch.

Now that Life Realized has spruced up 501 Dearborn’s steel-frame warehouse, things are different. Monday nights, it spills light and music out onto a front yard lined with string lights.

Close your eyes, and a smooth gent in a John Deere cap and glossy blue windbreaker—Ray Marbury of Venice—could be Willie Nelson. Back behind him, Jeff Cowherd (his real name) noodles along on a bizarre hybrid five-string beneath “Help Me Make It Through the Night.”

Himself a poster boy for life’s realization, Cowherd retired to Englewood from Kentucky and runs a company crafting high-quality, affordable mandolins and ukuleles.

Dodge organizes two bands—The Sidemen and The Gulf Breeze Bluegrass Band—which comprise Englewood Opry. For a decade they’ve been playing classic country and bluegrass throughout the area to an audience of nearly 100 loyal followers.

“When The Dearborn Center opened up,” he said, “we thought this would be the perfect place to call home, allowing our free show to go on Thursdays, rain or shine. We’re hoping to draw attention to the Dearborn Street downtown.”

“Open mic is just fun,” drawled singer/guitarist Don Bush. “Bill Lundgren creates a community of friendship among musicians. The thing about Bill’s open mics is that he makes sure you sound good. He has this whole sound system and can adjust the sound on the fly.”

Lundgren said, “I try to make sure they sound like they’re in my living room, not a stadium. We want it to feel comfortable, like family. Everyone has such a good time, enjoys each other and helps each other out.”

“Everybody has improved,” Bush added. “You can practice all you want in your living room, but get out in front of people and it’s different. And a lot of the audience is musicians, so we have fun with it.”

Self-taught singer/guitarists like 14-year-old Dalton Truit and 15-year-old Laura Hedderman—whose guitar is half as big as she is—have been coming to Life Realized open mics for years and gone from shaky, nervous kids who’d never played in public to poised performers who play all over town.

Lundgren confessed, “I’ve never before been involved in any community I lived in. But this feels like how things are supposed to be. I’m not really a people person, but this whole thing has made me one.”

“Many people don’t recognize that the thing that comes easiest to them might be of great value to others,” Jenkins said.

For her and Lundgren, that thing is helping other people find their own greatest value.