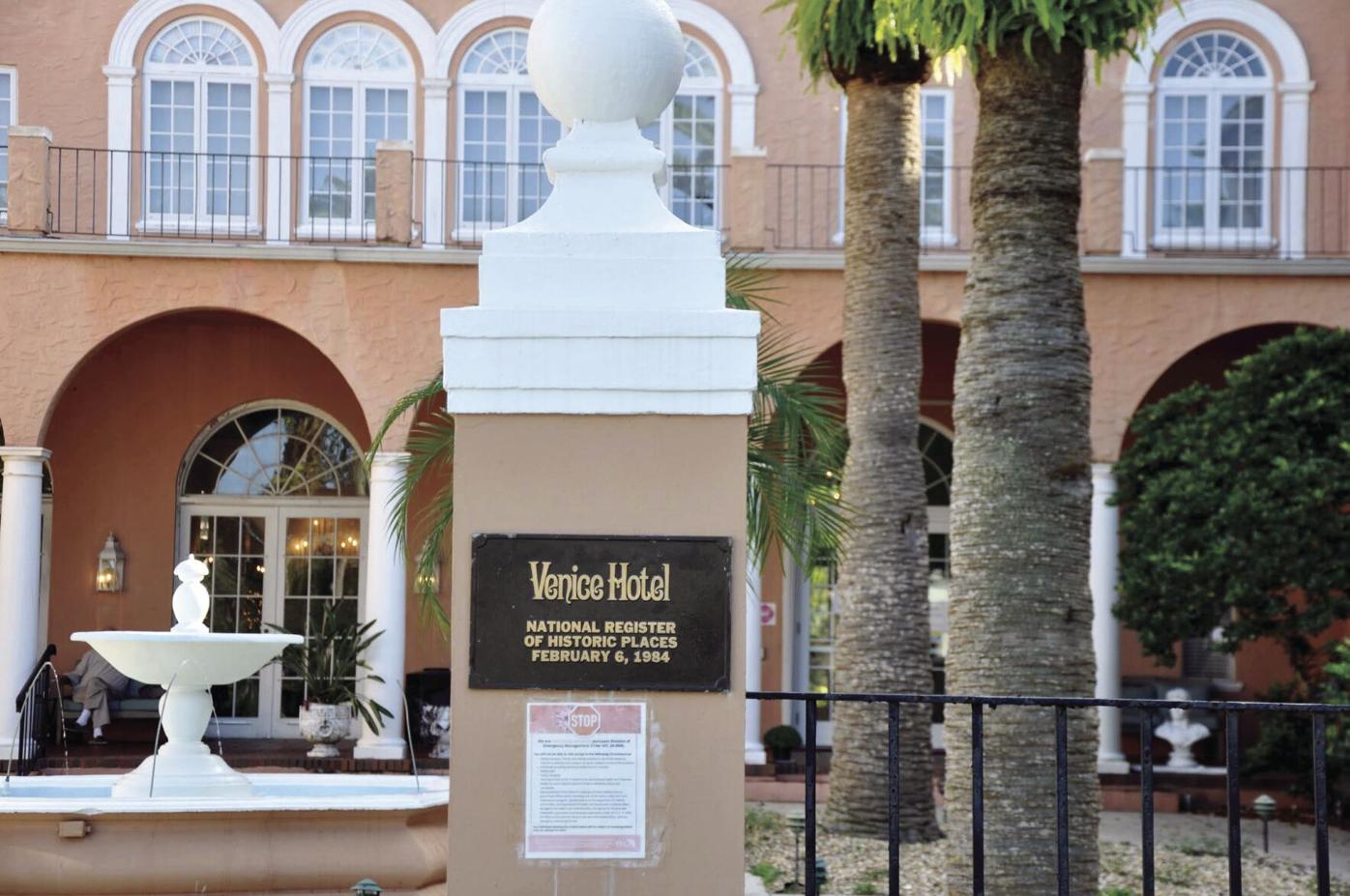 Now a retirement center, the Venice Hotel was the place to “see and be seen in town.” It was later one of two hotels the Kentucky Military Institute used for its winter program. 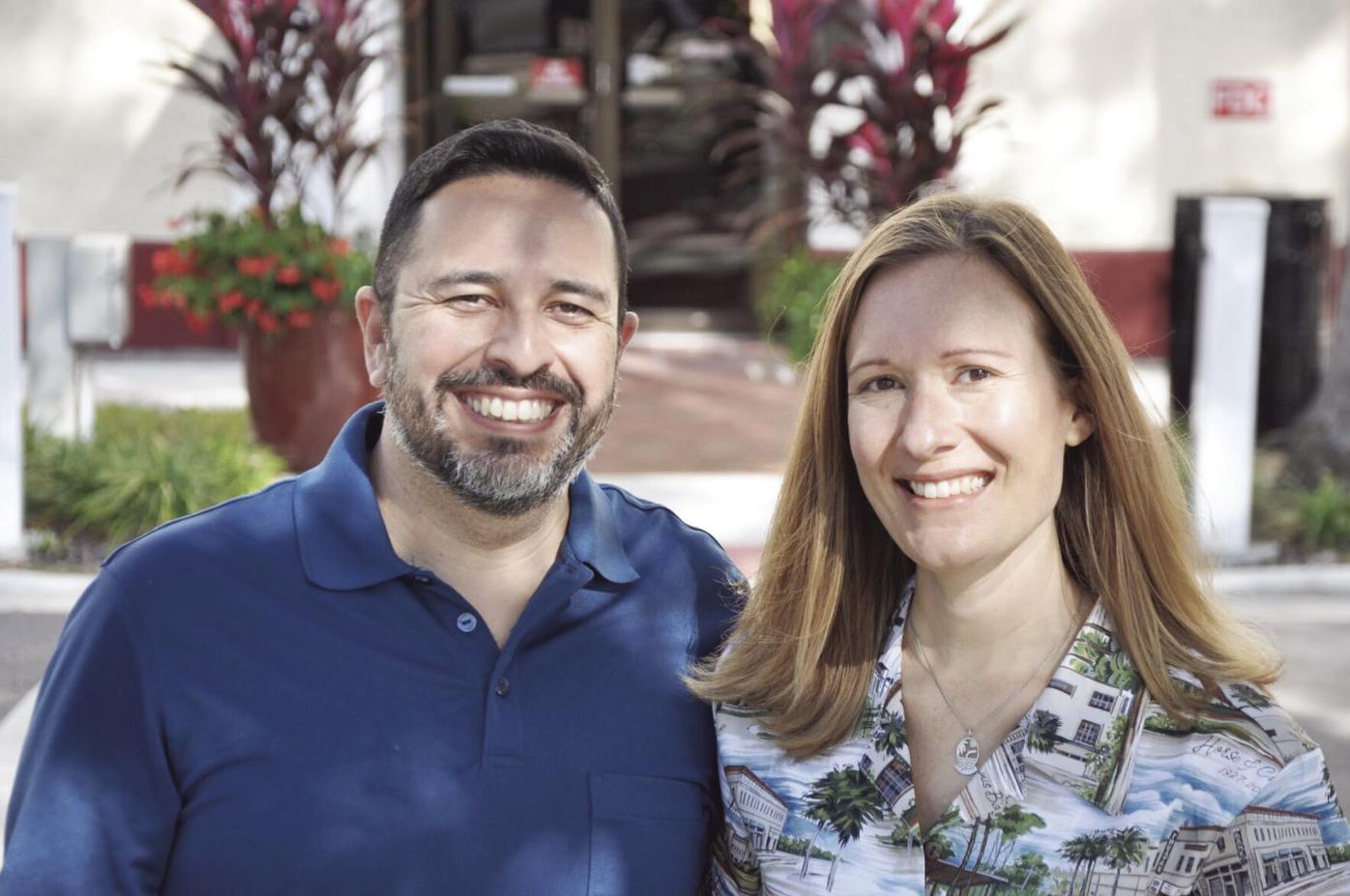 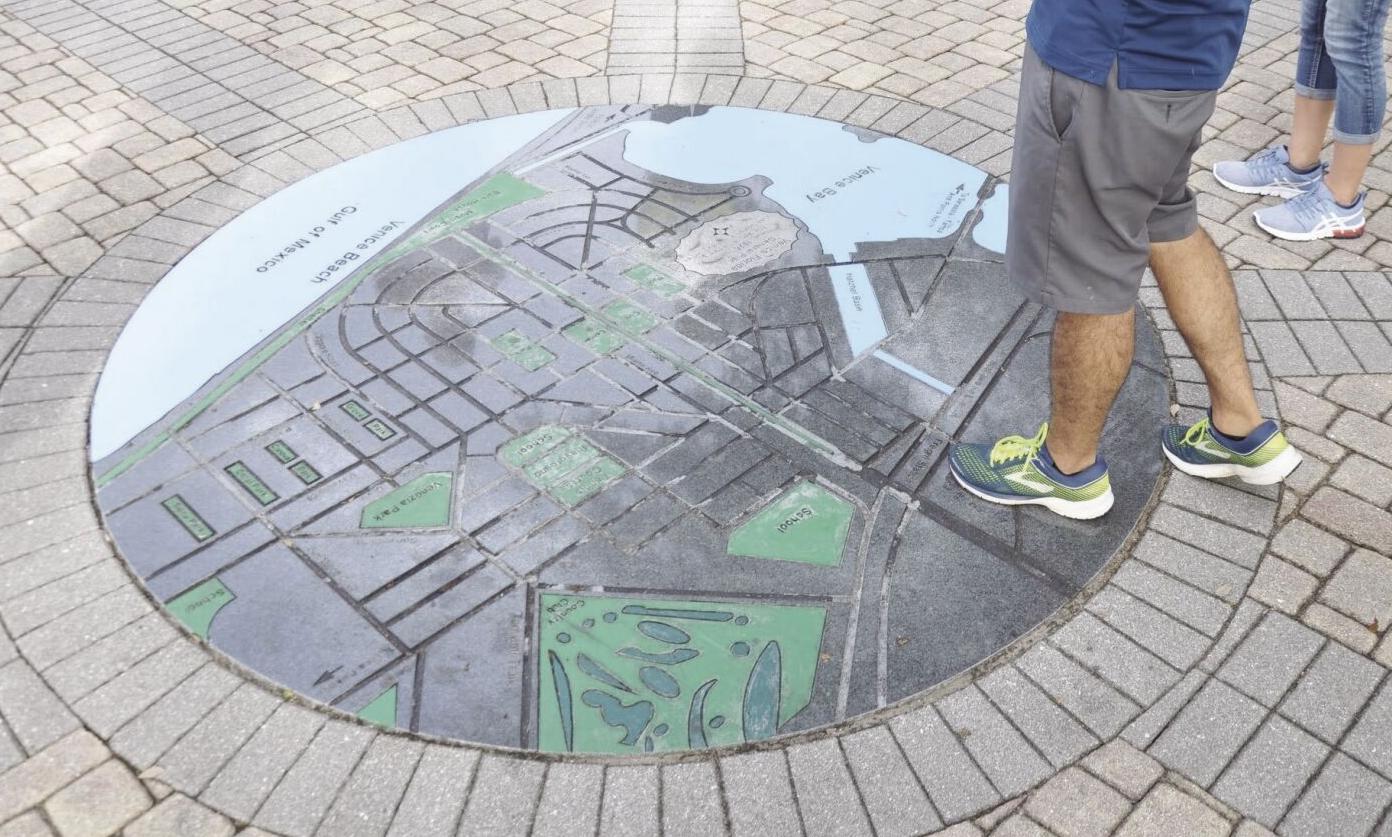 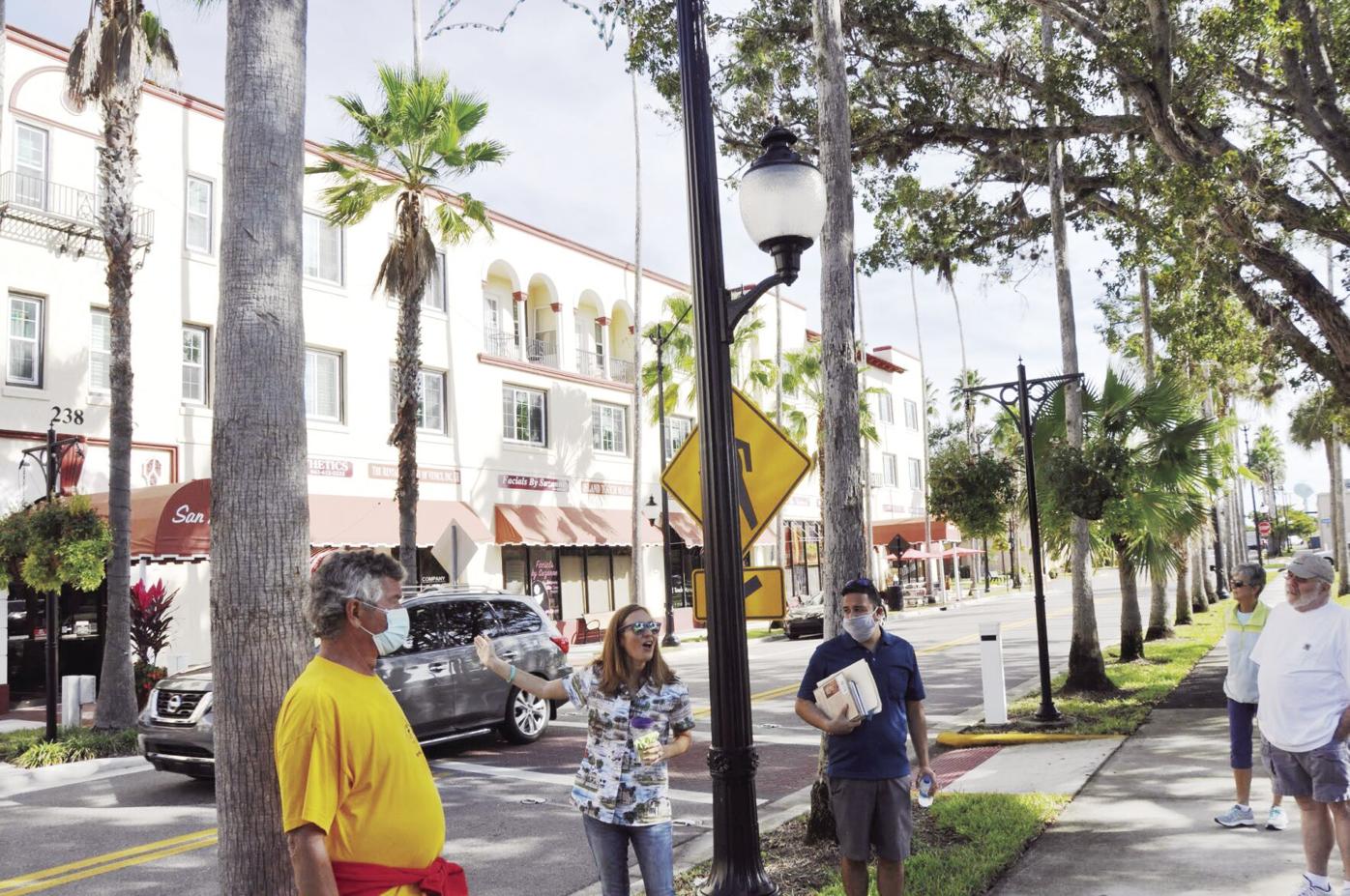 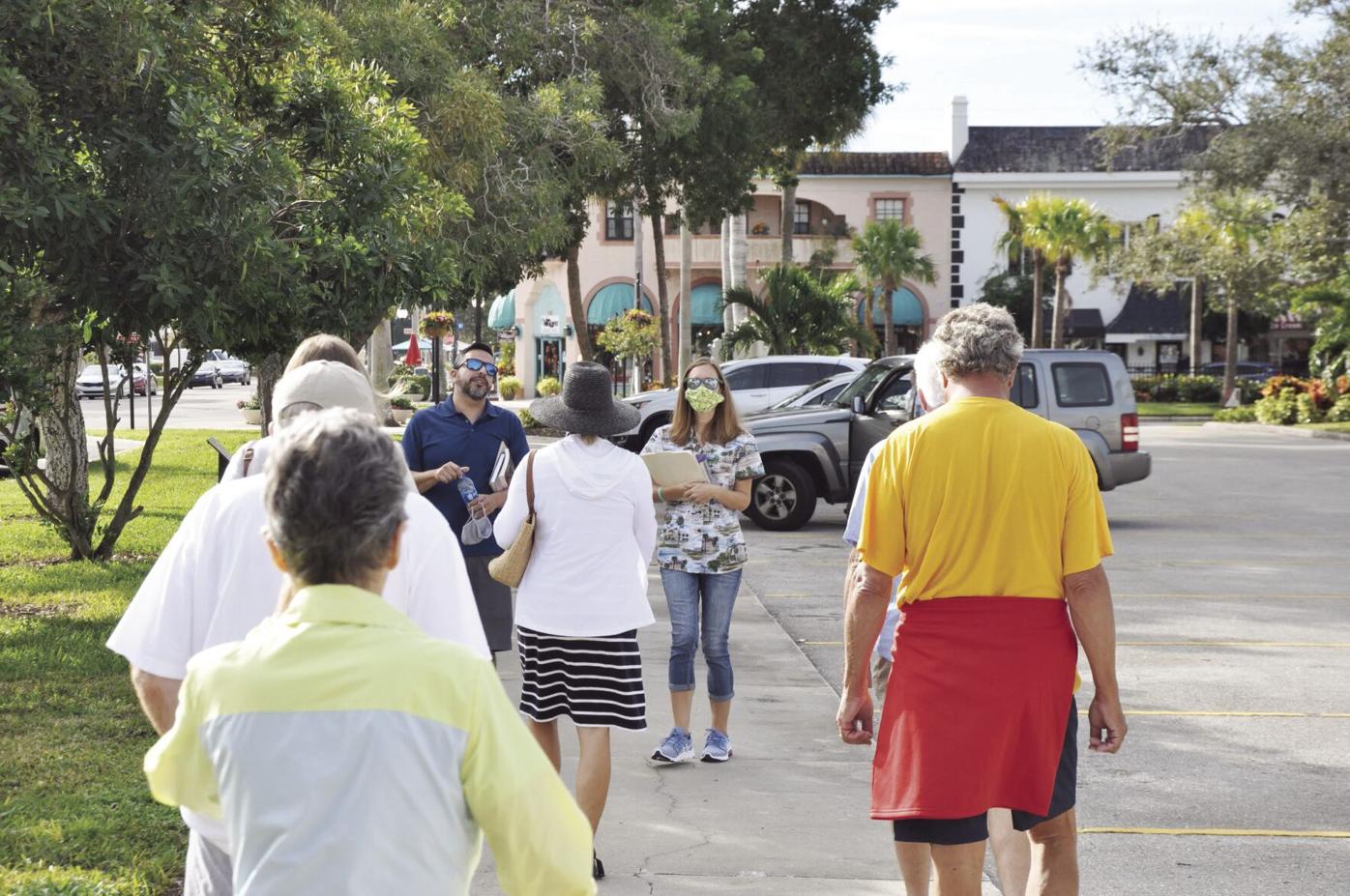 As tour guides do, Ronnie and Tiffany Fernandez have mastered the art of walking backwards. The Schoolcraft-Johnson building can be seen in the background. 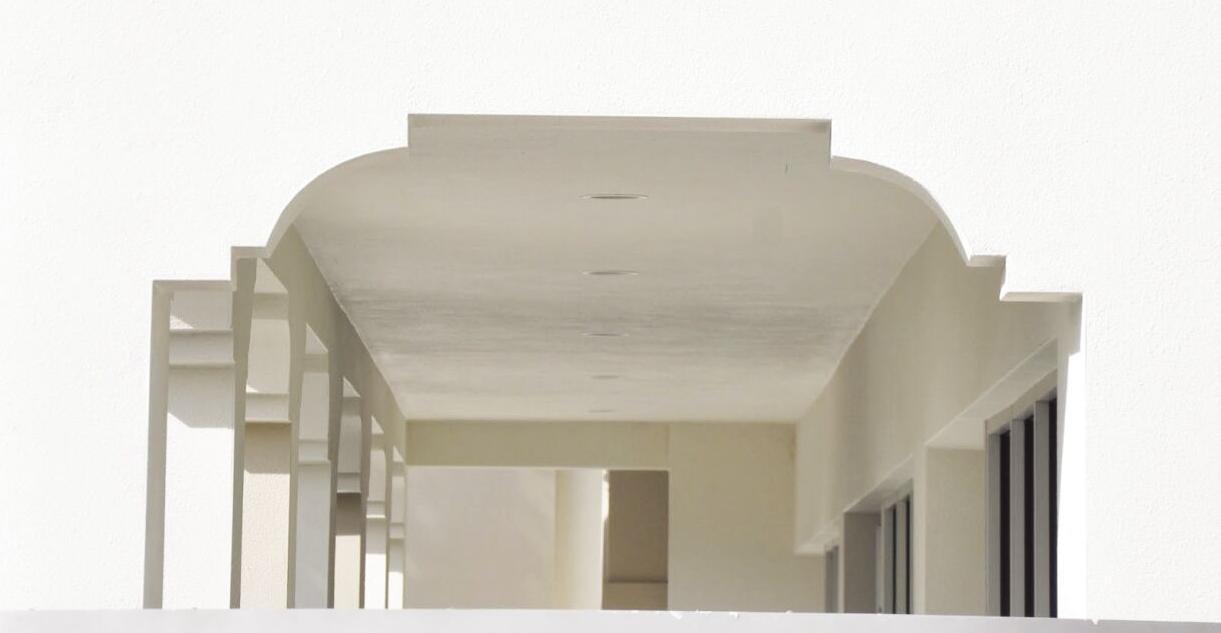 The architect for the building that replaced the old Venice Theater (built in 1927) copied the arches from the original design to maintain the architectural style of many buildings throughout Venice. 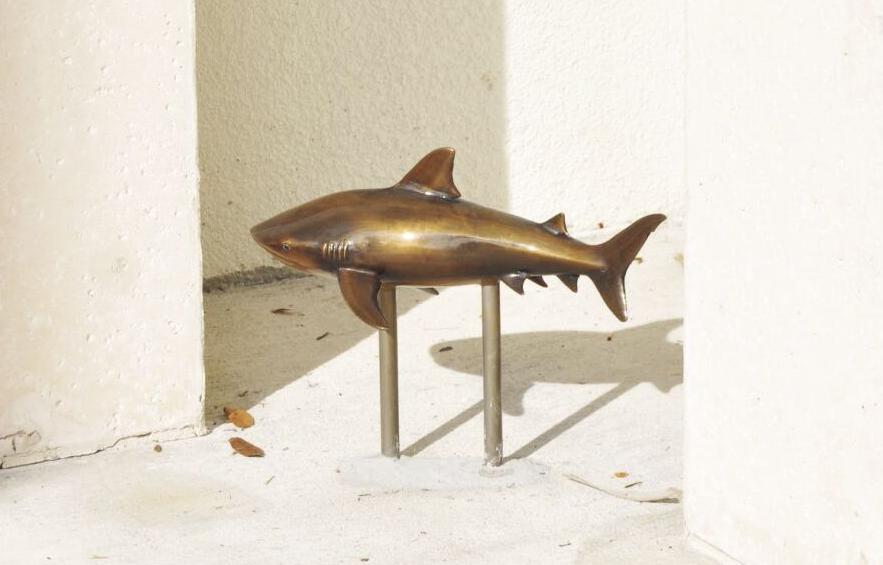 While learning about Venice’s history and architecture, you can also partake in Venice Shark Spotting, an interactive public art installation featuring bronze sculptures of 10 shark species native to the area’s waters. 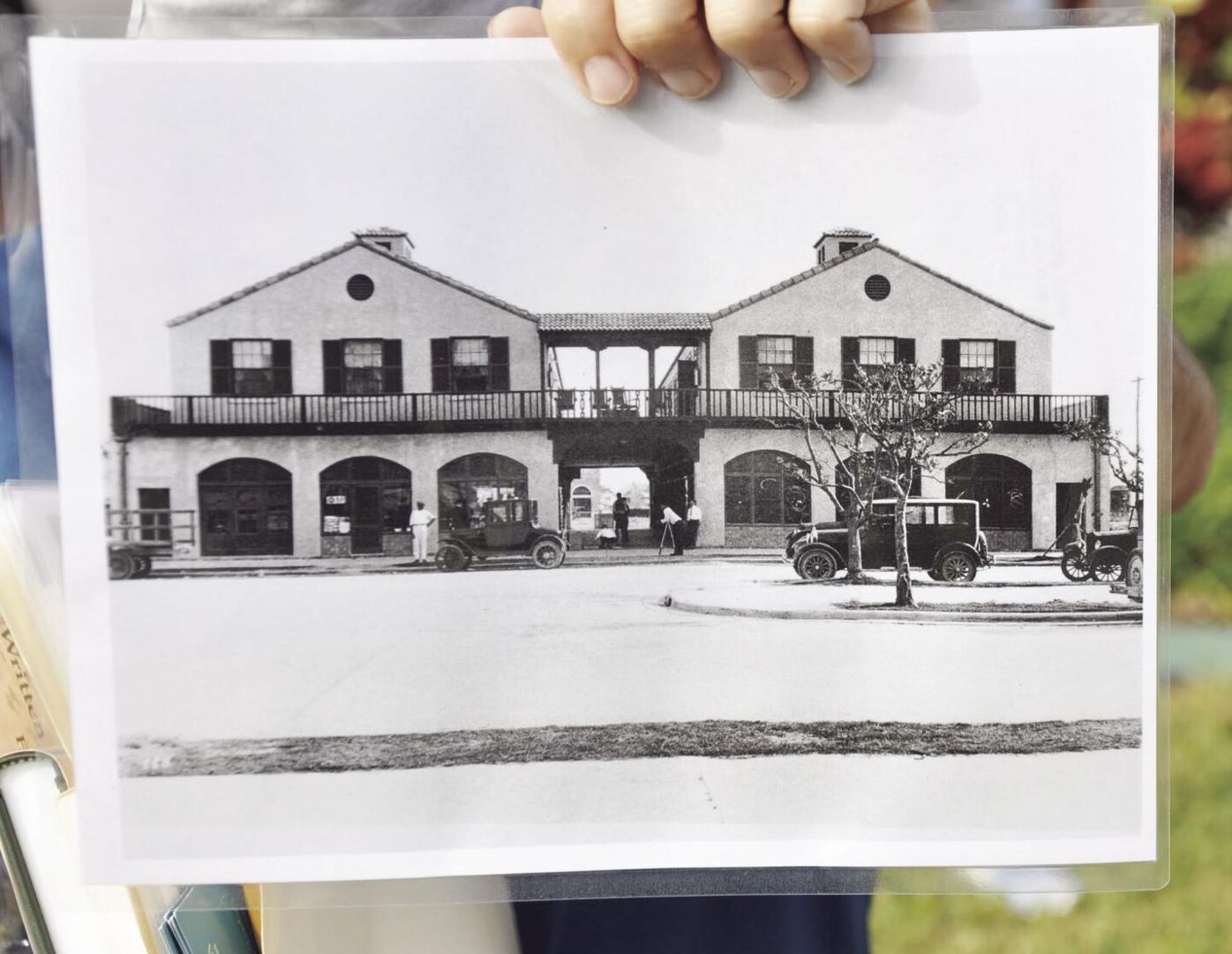 Historic photo of the Ennes Arcade and Hotel Valencia

Now a retirement center, the Venice Hotel was the place to “see and be seen in town.” It was later one of two hotels the Kentucky Military Institute used for its winter program.

As tour guides do, Ronnie and Tiffany Fernandez have mastered the art of walking backwards. The Schoolcraft-Johnson building can be seen in the background.

The architect for the building that replaced the old Venice Theater (built in 1927) copied the arches from the original design to maintain the architectural style of many buildings throughout Venice.

While learning about Venice’s history and architecture, you can also partake in Venice Shark Spotting, an interactive public art installation featuring bronze sculptures of 10 shark species native to the area’s waters.

Perhaps it was a warm sunny day that caught their attention. Venice residents Ronnie and Tiffany Fernandez were wandering the streets of Charleston, S.C. on a walking history tour of the city. That’s when the lightbulb of an idea came to their minds: they should offer the same type of tour for the City of Venice. The Charleston tour had been so interesting and so much fun; they knew they could do the same in the historic Venice city area.

Upon their return they did some investigating and came across a snowbird who offered a similar type of tour they took in Charleston, but only seasonally. They asked him if there might be room for them to begin similar history tours in the city, and he generously helped them connect with the right people. And Venice Florida Tours was born.

The weekly one-and-a-half-hour tours of historic Main Street in downtown Venice are the result of a great deal of research. Hours of preparation led Ronnie and Tiffany to develop a script they could use on the tour.

“We took a step forward and built a small business,” Tiffany said. “Each time we lead the tour, we feel more engrained in this beautiful community.”

Their knowledge, passion and expertise make the early history of the city come alive.

And there’s a lot of history to explore. A vast amount of history happened to Venice in a relatively short time. The Fernandez’s history tour focuses on several buildings along Venice Avenue and Nassau and Tampa streets. The tour focuses on how the city got its start, from “Horse and Chaise,” which described the outline view from the bay, until present day.

From Eyry to Guava to Venice

Ronnie starts the tour at the beginning of what shaped the downtown area. “Francis ‘Frank’ Higel came to Venice from Philadelphia in 1881 and purchased 70 acres of land from Richard Roberts, just south of Roberts Bay.” Higel, a chemist, sought to plant a crop of cassava plants from which he planned to extract starch. He brought down an investor to observe his process in the middle of the coldest winter Florida had seen for some time, so his plants and his idea were both frozen.

Higel remained in Venice while his investors went back north. He developed some marmalade jams, jellies, a “lemon cordial” and orange wine. He established a post office for his little community of 30 residents, calling it Eyry, and became postmaster in 1885. By the end of the year, that office closed.

Three years later, Darwin Curry applied for a post office to open in what appeared to be a city called Guava. Apparently, the story goes the city name Guava got crossed out and someone wrote “Venice” in.

“Apparently there was an argument between Curry and Higel who thought of the name Venice first,” Ronnie shared as he successfully maneuvered walking backward down the street while answering questions on the tour.

In 1910, Bertha Palmer, of the Chicago Palmer House Hotel fame, acquired about 140,000 acres of then Manatee County (now Sarasota County) including a good part of present-day Venice with a mile and a half of the beach. She was able to convince and have the Seaboard Airline Railway come down to present day Venice, and her Sarasota-Venice land development company developed a plat survey for the town in 1915. The onset of World War I forced her to abandon her developmental plans. She later died in 1918.

“Enter Dr. Fred Albee and his wife, Louella. This Harvard-educated physician known for bone reconstruction felt it was too cold up north and saw what Florida offered,” Tiffany shared. “Albee purchased 2,916 acres of land from the Palmer family in 1924 and sought to develop the town.” He had already spent a great deal of time developing Nokomis and had planned to develop Venice with the help of a renowned city planner, John Nolen.

Along the way of the tour, we are led past the beauty of many of the historic downtown buildings. Ronnie and Tiffany carefully point out the nuances of the city’s history as they contain the keys to the structures which were built, and why they are where they are today.

Ronnie goes on. “Nolen’s design was unique. It provided a master plan for the city’s development.” Albee’s plans of developing the city changed when the Brotherhood of Locomotive Engineers (BLE) from Ohio offered to purchase his land on October 6, 1925. Albee sold his land to the BLE so they could increase their assets and have a suitable place for their membership to visit.

The newly formed BLE Realty Company then kept Nolen on to develop a newly revised plan for the developing city. They appointed George Fuller as general contractor, New York’s architecture firm of Walker and Gillette as supervising architects, and Prentice French as landscape architect. They opened the first street on June 10, 1926. The town was finally getting ready to be born on May 9, 1927.

The BLE required buildings to be developed using the Northern Italian Renaissance architectural style. Developers regulated all aspects of the construction to achieve a truly unique character. With the background details freshly placed in the tour participant’s mind, Robbie and Tiffany shared the pattern of the placement of the historic buildings in their initial spots.

William D. Schoolcraft and C. Paul Johnson built the Schoolcraft-Johnson building in 1926. The two-story, stucco-finished building at the corner of Venice Avenue and Nokomis Avenue cost $45,000 to build and featured apartments on the second floor. Occupying the first floor was the Venice Pharmacy, with its pink onyx soda fountain and solid mahogany fixtures. In 1929, the Peninsula Telephone Company operated its switchboard. The exterior is essentially unchanged from the 1926 construction.

Tiffany commented on the palm trees that grace Venice Avenue. “Prentice French planted orange trees down the middle of the street, but they never fared well.”

Steps west on Venice Avenue are the Ennes Arcade and Hotel Valencia. “Built in 1926, the BLE built this building in the Mediterranean style of architecture as they developed Venice.” It is on the National Register of Historic Places.

Ronnie described several buildings that no longer exist along Venice Avenue. Made mostly of wood, these structures deteriorated over time and would need to undergo replacement. The City Center, now where City Hall and the recreational courts reside, was a location where the BLE used the space “to impress people with how good things were around here” Ronnie stated. Included in the block was the Venice Theater, built in 1927. These structures no longer standing reflected the “hustle and bustle” of the early town just before the devastation of the market collapse of 1929.

The Kentucky Military Institute came to Venice in 1932, renting out the Hotel Venice for its winter program. Originally quartered in Melbourne, a fire destroyed the school’s facilities and interrupted its complete winter program.

Built in just 90 days for a cost of $500,000, the Venice Hotel was the first building in town. Using mostly local materials, the BLE flooded the site with as much labor as they could. It features 100 rooms, with private baths, and was the place to “see and be seen in town.” Sitting on the first paved street in the city, Ty Cobb, Harvey Firestone, John Ringling, Thomas and Mina Edison and Henry Ford visited the Venice Hotel and attended some of its gala events. Capt. George Haldeman landed the first airplane in town there with a cargo hold full of strawberries from Plant City. He then taxied down the paved street and returned home.

The KMI also used the San Marco Hotel for their program purposes. Originally built as well in 1926, it, too, took three months to build. Built by the BLE according to the rigid standards set by Nolen, the existing building features a decorative lobby, spaces for 13 shops and a restaurant, and 92 residential rooms with private baths. The San Marco was a prize of Venice but fell into disuse in 1928 because of the economic collapse of the BLE and the Great Depression. “When the KMI came, they brought everyone and everything” Ronnie shared, “took over the spaces in 1932 and were here every winter until 1970 when they closed.”

Other areas discussed briefly on the tour were the Venice Army Air Base, the Venice Train Depot, and the Ringling Brothers Barnum and Bailey Circus Winter Headquarters. While these were not within the historic downtown area, their influence added to the development of the city as we know it today.

Venice Florida Tours offers a haunted tour and regularly scheduled history tours. Their Facebook page, www.facebook.com/VeniceFloridaTours, provides all the details. Ronnie also serves the community as the President of the Venice Heritage, Inc. A history major, the Fort Worth, Texas native has lived and worked with Tiffany here in Venice since 2014.

We see Tiffany wearing a “Lost Buildings of Venice” shirt. It includes artwork of the “lost” buildings in Venice, including the Venice Beach casino, the Circus Arena, the Gulf Theatre, Hotel Villa Nokomis, the Park View Hotel, Horse & Chaise, the Venice-Nokomis Presbyterian Church drive-in and the Venice-Nokomis Bank. The shirts are on sale and the proceeds are a fundraising effort for the Venice Heritage Inc. The shirts are available at the Venice Museum while supplies last. The Venice Museum is in the historic Triangle House on Nassau Street.

An excellent blending of history and architecture, Venice History Tours makes for a most pleasant way to spend your Saturday morning.