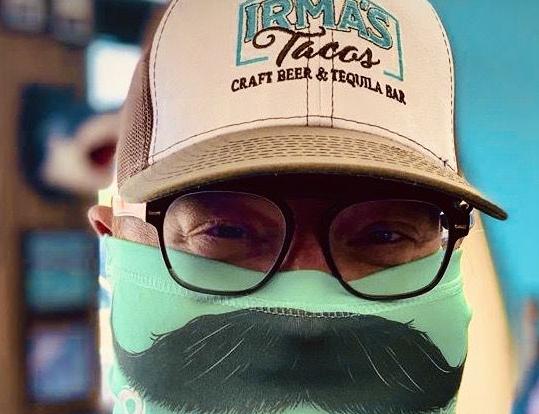 Tommy Villani mustache you a question: “When are you coming to Irma’s Tacos? All of our employees will be ready to welcome you with these great face buffs courtesy of Gulf Breeze Apparel.” 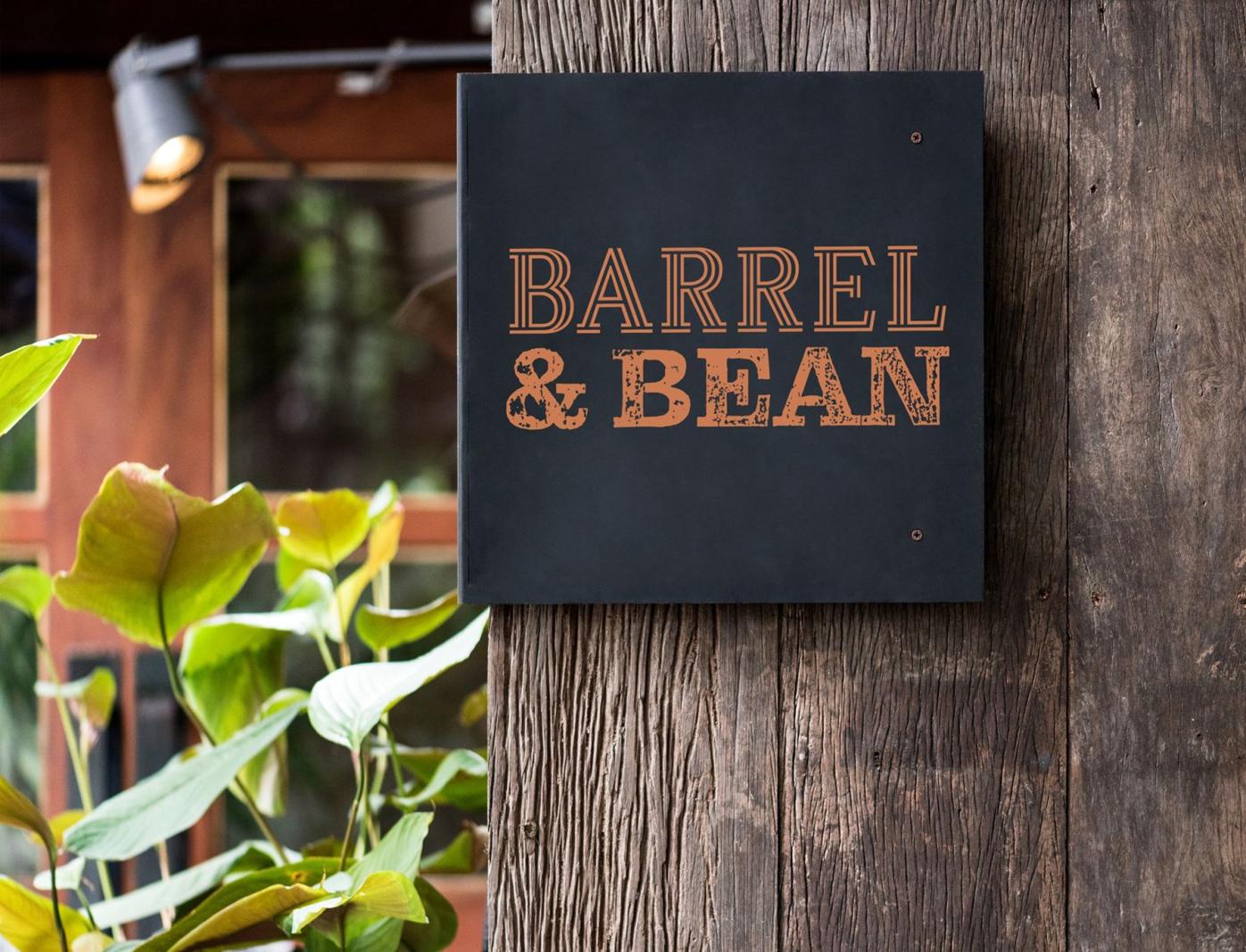 Barrel & Bean is expected to open this fall in Wellen Park Welcome Center. 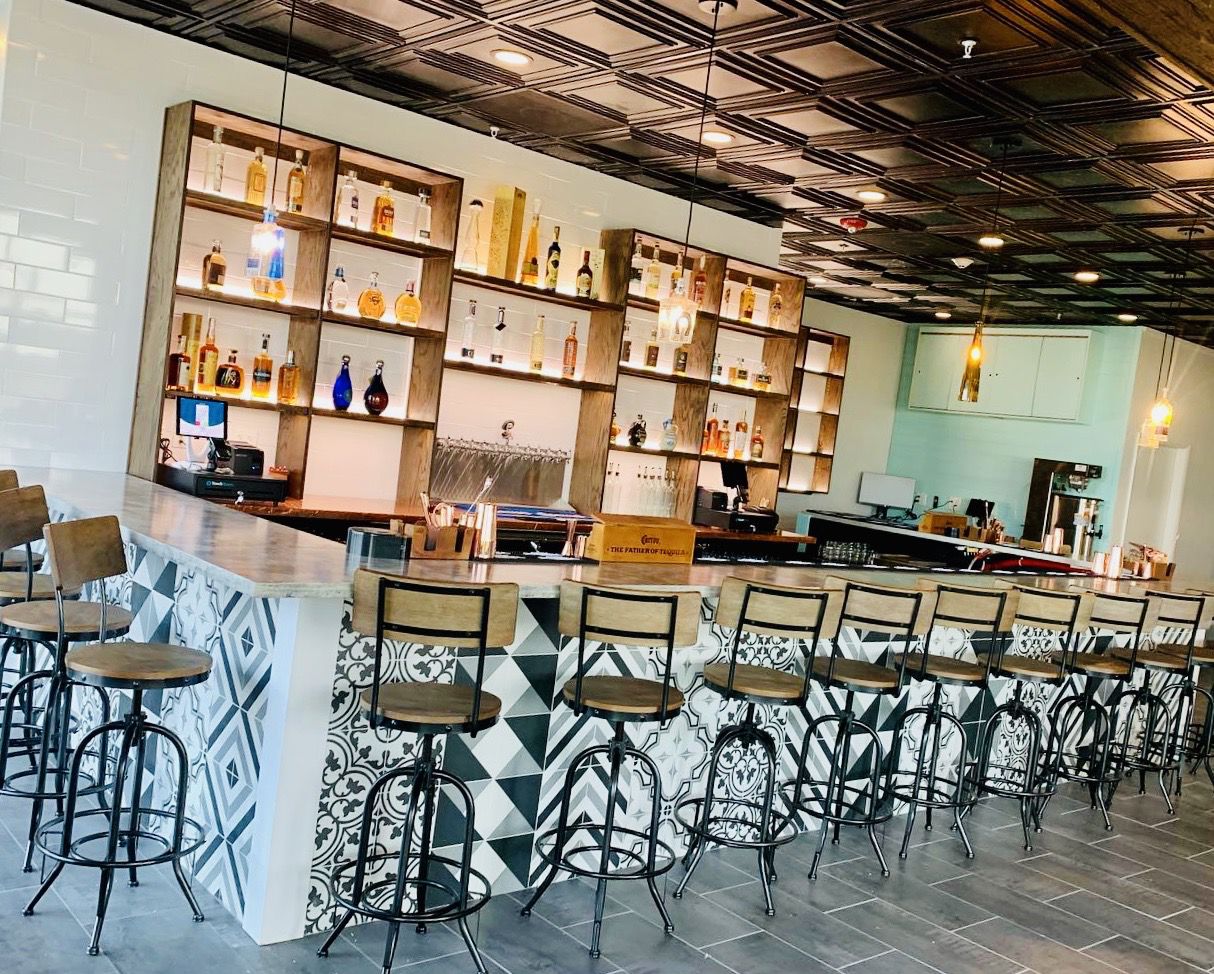 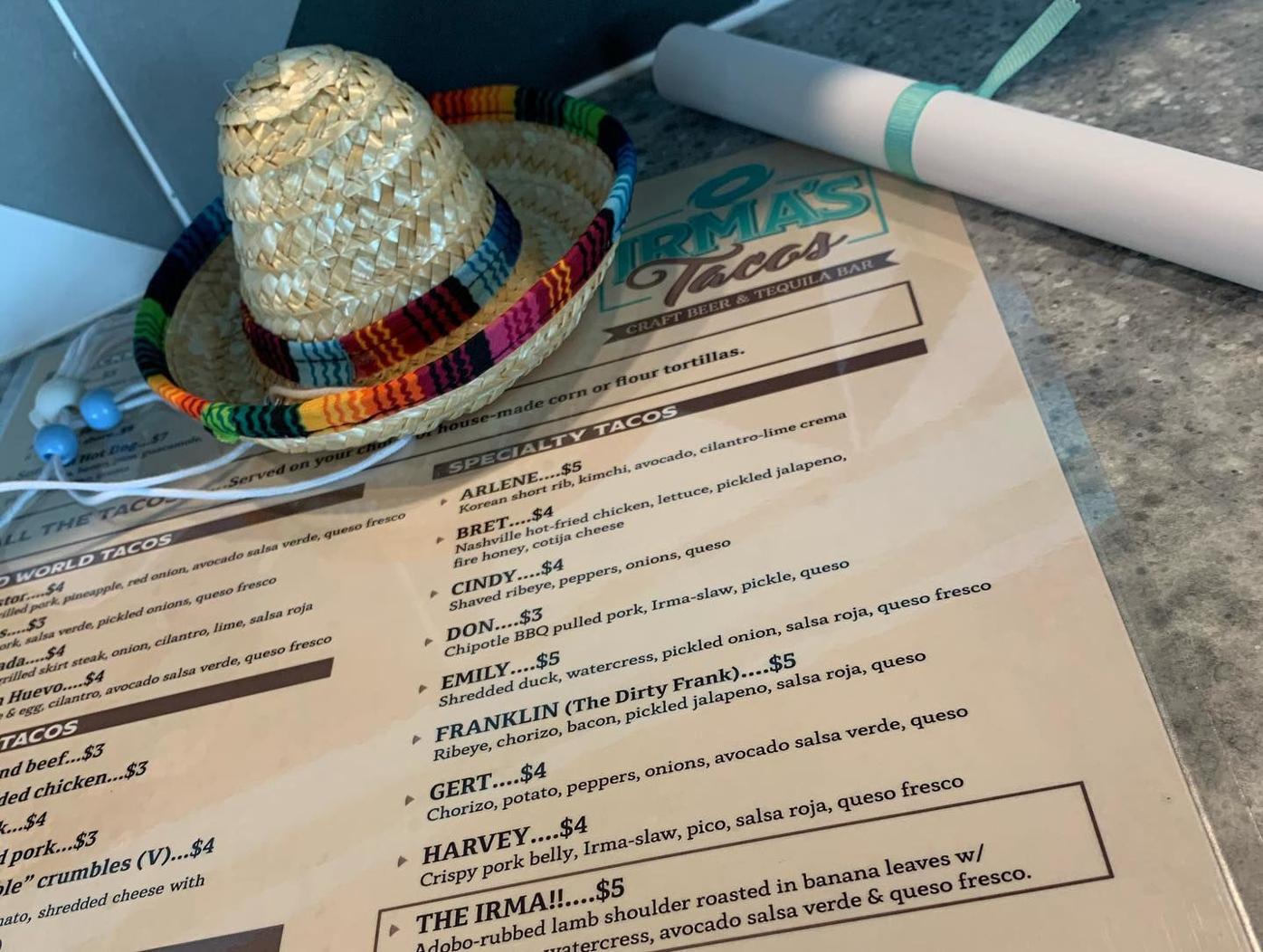 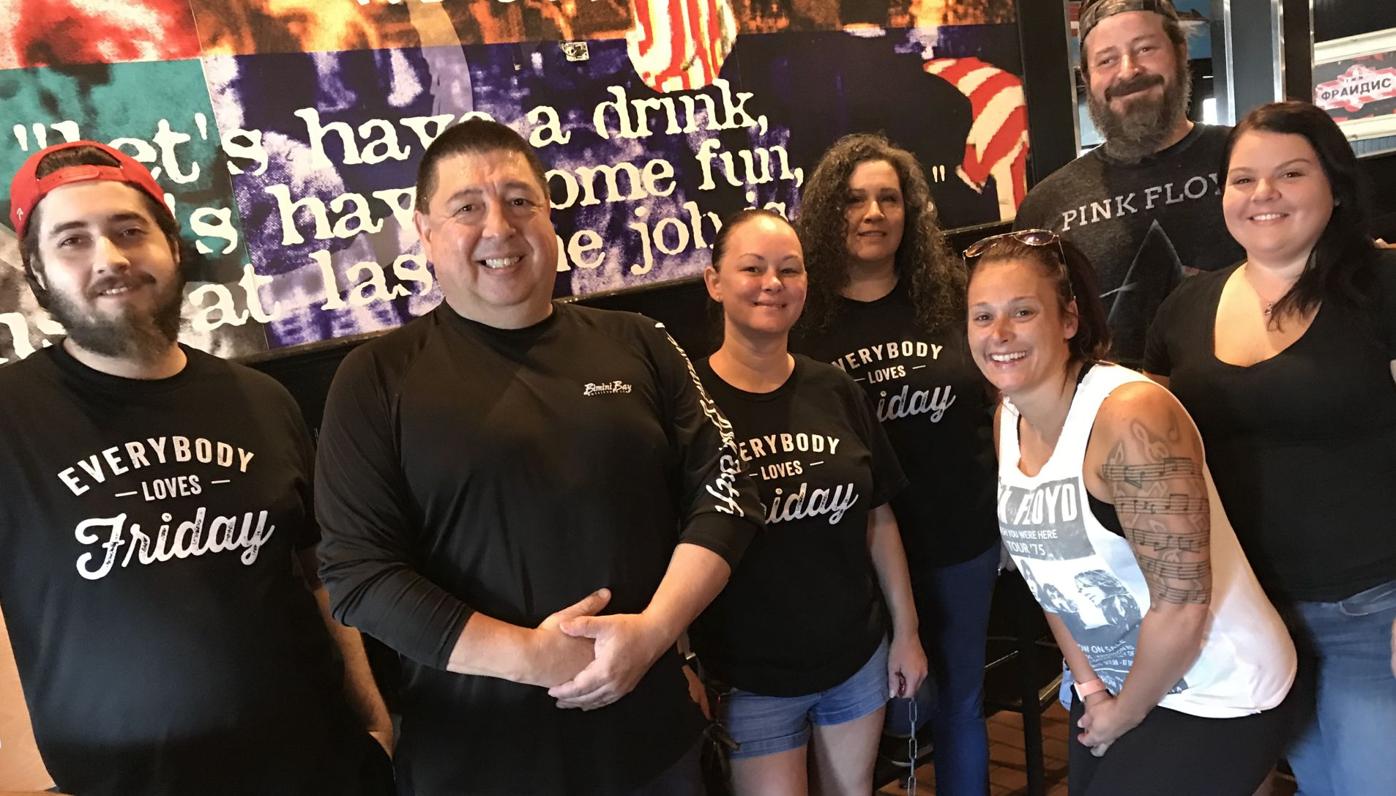 Tommy Villani mustache you a question: “When are you coming to Irma’s Tacos? All of our employees will be ready to welcome you with these great face buffs courtesy of Gulf Breeze Apparel.”

Barrel & Bean is expected to open this fall in Wellen Park Welcome Center.

Venice entrepreneur Tommy Villani, managing partner of the newly formed OTW (Off The Wagon) Restaurant Group, first announced his new restaurant concept over a year ago.

“I’m trying my best,” he quipped. “I’ve never opened a restaurant in the middle of a world pandemic before.”

WHAT KIND OF STATE NAMES ITS BARS AFTER NATURAL DISASTERS?

It’s not unheard of for local bars to name themselves for hurricanes (think Hurricane Charley’s), but the Irma connection holds special meaning for Off The Wagon Brewery & Kitchen and its community.

It all began with an impromptu 2017 feed, the day after Hurricane Irma had left thousands in Venice without water or power. Villani and executive chef Mike Leopold opened Off The Wagon to serve anyone who needed it.

All Chef Mike had ingredients for was tacos. But the power was on, a delivery was coming and OTW was filling up water bottles for everyone.

For one day, OTW became Irma’s Taco Bar, a community oasis that plated more than 600 tacos for a grateful public.

Villani’s new Irma’s Tacos is both permanent and ambitious. And all its specialty tacos are named after hurricanes.

The 2,000-square-foot Wellen Park space features authentic ethnic and Mexican street tacos in house-made flour and corn tortillas, craft cocktails from mules to margaritas, OTW-brewed 3 Bridges beer, a 120-bottle tequila list and 10 mezcals. Off The Wagon has been perfecting everything for the past year, in weekly taco and tequila teasers.

Chef Mike once said, “I’m inspired by American regional food. When I’m traveling, I want to eat what the locals eat. And I’m constantly evolving menus in my head. I think about them when I’m on the golf course — which doesn’t help my game at all.”

He’s been preoccupied with plenty of menus lately. The Irma’s taco menu alone has him stretching his culinary wings in high-flying new fusions.

Specialty $3 to $5 tacos include everything from the Arlene (Korean short rib, kimchee, avocado and cilantro-lime crema) to the Dirty Frank (ribeye, chorizo, bacon, pickled jalapeño, salsa roja and queso), plus four vegan tacos. For tamer tastes, there are the Maria, a solid cheeseburger taco, and the Katia, a BLT-aco with chipotle mayo.

Both of Irma’s soft openings last week extended the OTW hand of giving to its newest community. No comps here. Villani charged guests for tacos and tequilas, with all profits benefiting North Port Coalition for Homeless/Needy Children (Back Pack Angels) in IslandWalk.

What’s next for OTW Restaurant Group? We have to ask, because Villani always has something up his sleeve.

Barrel & Bean — yet another new concept, in partnership with the 6,000-square-foot Wellen Park Welcome Center coming to 12275 Mercado Drive — will take up one-fifth of the Welcome Center, pivoting from morning craft coffee and pastries to craft beer and wine in the afternoon, with happy hour, dinner, and a menu of tapas-like small plates from Chef Mike. Out back, a patio/beer garden will overlook the sunset and a natural preserve.

Open to the public all the time, Barrel & Bean will also host special residents’ nights and Wellen Park caterings.

The Welcome Center itself will be a central meeting place for both residents and prospective home buyers, with interactive displays for visitors to discover which Wellen Park neighborhood best suits their lifestyle.

Originally planned for a May 1 opening, Barrel & Bean has, like everything else, been pushed back — in its case, until fall.

The band Semisonic’s poignant “Closing Time” (1998) includes the earworm adage “Every new beginning comes from some other beginning’s end.”

When they discovered that their workplace of, for some of them, 19 years had closed without notice, all of Port Charlotte’s T.G.I. Friday’s employees were in shock.

Now 10 of them are singing the Semisonic lyric.

Must’ve been fate, too. Both places of employment have the same initials.

The 10 reemployed are among the same crew photographed or interviewed for a recent Sun story: Alexis Altman, Aurelia Coblentz, Jake DiGregorio, Jaimi Filkins, James Fornili, Katie White and Camryn Costanzo, who’d said, “I met some of my closest friends there. It was like a family.”

There’s nothing like keeping family together. Now TGIF’s customers who also felt like family will know right where to find their favorite waitstaff.

The Twisted Fork ($$), 2208 El Jobean Road, will open as soon it gets its certificate of occupancy and license.